Everyone is familiar with the strongman, the bearded lady, or the Siamese twins Chang and Eng, but they were not the only examples of—for lack of a better word—circus freaks. This list is a compilation of obscure, lesser-known freaks, who deserve the notoriety their counterparts received. 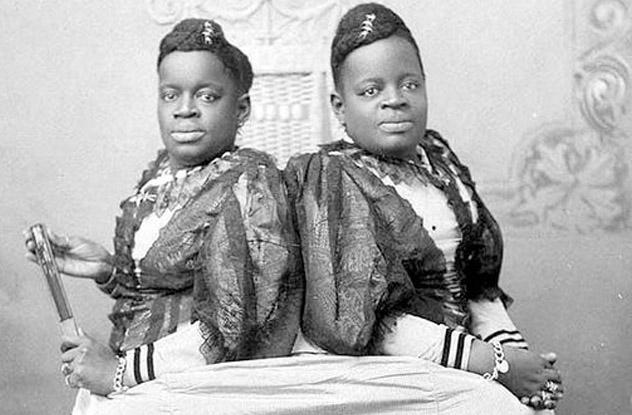 During the 19th and early 20th century, a pair of conjoined twins named Millie and Christine McCoy—literally joined at the hip, and sharing a number of vital organs—toured as the “The Two-Headed Nightingale.” They were born as slaves in 1852 and were sold before their first birthday to a man named James P. Smith. Smith paid $6,000 for the sisters and bought the rest of their family, too, uniting all of them. He also arranged to have the two receive an education in a variety of subjects, including song and dance.

They became beautiful singers, hence the “Nightingale” nickname, and they were also accomplished pianists. The sisters performed for more than 30 years, even traveling with P.T. Barnum for a while, amassing a small fortune along the way. However, after a fire destroyed most of their possessions, they lived in poverty, until they died of tuberculosis at the age of 61. 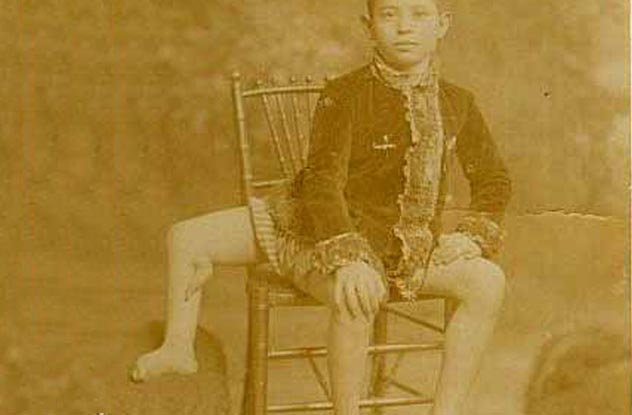 Francesco Lentini was also technically one of a pair of conjoined twins. But Francisco’s “brother,” attached to his spine, consisted only of a set of genitals and a leg. He had 12 normal siblings, so his birth defect came as a shock. The midwife who delivered him was rumored to have placed him underneath the bed and run from the room in terror.

After doctors examined him and declared surgery to be too big of a risk, Lentini’s parents tried to help him cope with his disability, for he was often teased. However, when he went to a children’s institution and saw those worse off than him, he resolved to be happy with life. For 40 years, he toured with various circuses, including Barnum’s & Coney Island, and he was so well-respected in his line of work he was often referred to simply as “The King.” As he grew older, he became a bit of a stand-up comic, claiming he always bought two pairs of shoes, giving the leftover one to a one-legged friend of his.

Born in Puerto Rico in 1911, Percilla Lauther was afflicted with hypertrichosis (also known as “werewolf syndrome”), which gave her abnormal amounts of hair and two rows of teeth. She was adopted by an American after her father’s death, a man who grew increasingly angry that she was dubbed “The Monkey Girl.” It was during a circus tour that Lauther met a man named Emmitt Bejano, who suffered from ichtyosis, a disorder which made his skin extremely tough and scaly.

The two of them eventually eloped and happily toured together for years, known as “The World’s Strangest Married Couple.” She was even an occasional guest on Jerry Springer, where she would occasionally sing songs. Once they retired from performing, Lauther would have to shave every three days to keep up with her hair growth. The two of them remained married until Bejano’s death in 1995, nearly 60 years after they first got married. 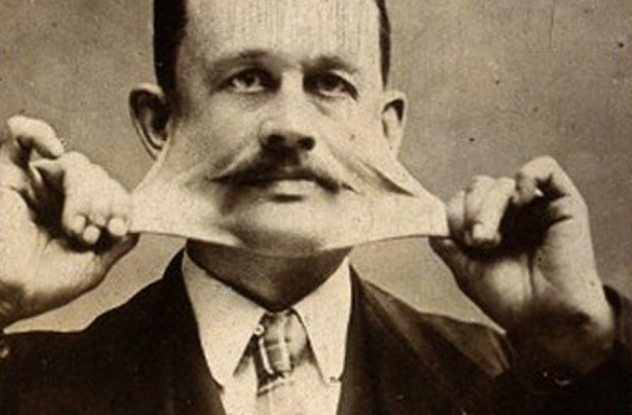 James Morris was born in New York during the 1800s with “Ehlers-Danlos syndrome,” the strange ability to stretch his skin to unbelievable lengths Touring as the “India Rubber Man” or the “Elastic Skin Wonder,” he was extremely popular, especially when he took the skin around his neck and pulled it over his eyes. Entertaining his friends for years, even when he was in the military, Morris built up a large reputation which enabled him to carve out a career for himself.

Yet another successful participant in the Barnum circus, Morris earned as much as $300 a week, though he succumbed to various addictions and had to get a second job, as a barber, to fund his activities. Unfortunately, the disorder which granted him his incredible ability was also extremely painful, and welts and scars often formed in the areas that Morris stretched. 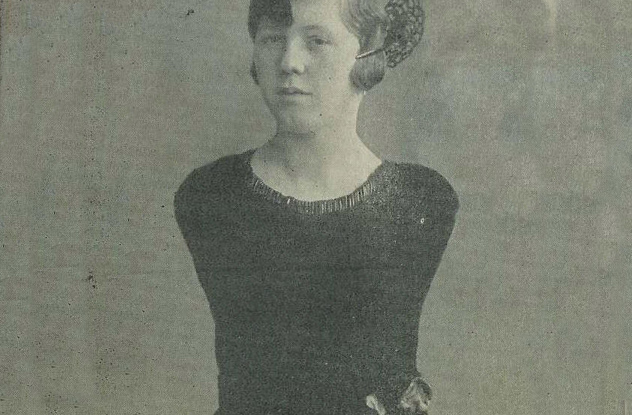 Violetta had no legs or arms, due to a condition called tetra-amelia syndrome. Remarkably nimble for someone without their limbs, she often combed her own hair or sewed things together, even threading the needle unaided. Violetta suffered no other ill effects because of her disorder and was said to have higher functioning senses than a normal person.

She occasionally toured as the “Beautiful Armless and Legless Venus.” She was said to have an absolutely perfect torso, with doctors examining her and claiming she was without blemish. At the end of her shows, Violetta would have a nurse carry her around, allowing the audience to touch her if they wished. However, some impertinent young men, and even some women, would try and kiss her. When it happened, Violetta would jab them in the chin with her shoulder, hard enough to draw tears in some cases. 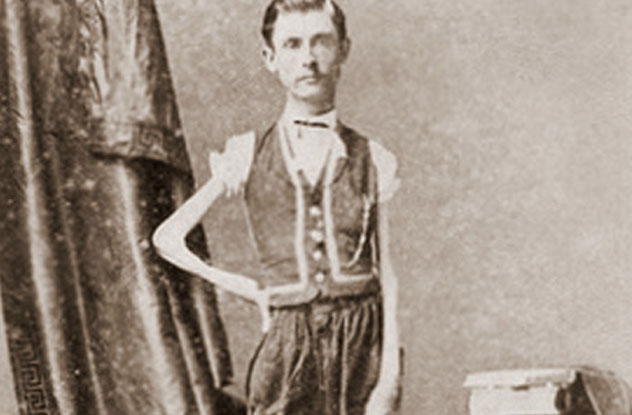 Isaac W. Sprague was relatively normal as a child, but he began losing large amounts of weight at the age of 12. He later struggled to work due to his intense malnourishment. Once he reached adulthood, he joined a small-time circus, eventually joining P.T. Barnum as “The Human Skeleton” less than a year later. Shortly after, Barnum’s American Museum burned down and Sprague was lucky to escape with his life. During his hiatus, he got married and had three sons.

Due to increasing financial strain, he joined Barnum again but eventually died in 1887, poverty-stricken thanks to his gambling addiction. He could often be seen sipping milk from a flask he carried around his neck, absolutely vital to keep him conscious. Upon his death, Sprague donated his body to science, so a reason for his thinness could be discovered. Shortly before his death, he stood 168 centimeters (5’6″) and only weighed a hair over 18 kilograms (40 lb). 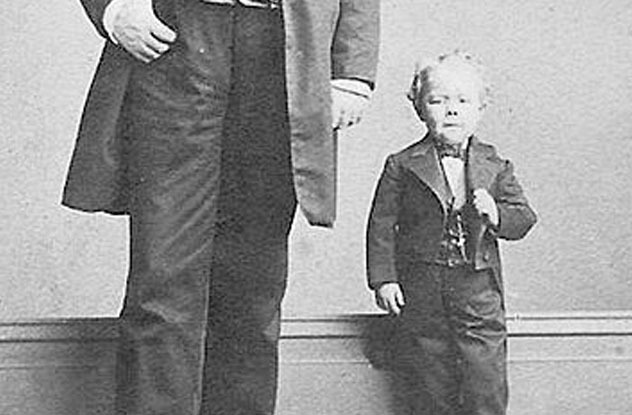 In 1862, P.T. Barnum discovered George Washington Morrison Nutt touring the English countryside as a midget in a smalltime sideshow. Barnum was taken aback by the lack of care provided by his manager. So (the showman would claim) he paid Nutt’s parents $30,000 to employ the boy for three to five years, on the condition that he also give them a proper education.

Nutt ended up becoming a fierce rival of General Tom Thumb, another of Barnum’s miniature performers, because the two of them both vied for the affections of a third circus dwarf, Lavinia Warren. The conflict even escalated into physical violence on one occasion. Nutt was extremely distraught when Warren chose Thumb over him, and he swore off women for years. 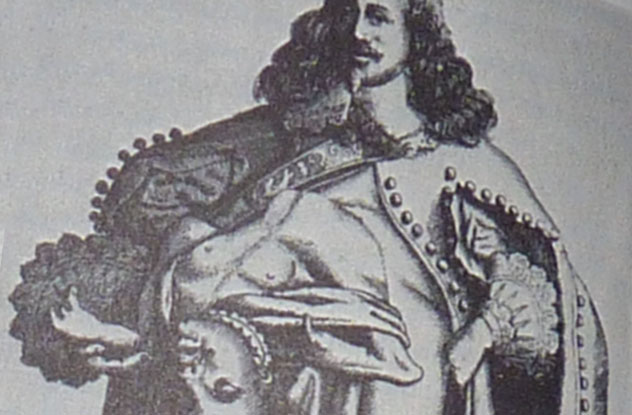 The Colloredo brothers are yet another example of conjoined twins, but they happen to be one of the earliest examples of conjoined twins ever recorded. The duo of Lazarus and Joannes Baptista Colloredo. were alive during the early 17th century, over 150 years before the famous Siamese pair of Chang and Eng. The Colloredo twins toured all over Europe, to great fame and fortune. On one occasion, the twins were able to get an audience with King Charles I and Queen Henrietta, showing the reach of their celebrity.

Although Lazarus was fully functional, said to have even sired multiple children, his brother Joannes was more of a parasitic twin protruding from his torso. Joannes could barely move and couldn’t communicate at all, and Lazarus would cover him with a cloak or blanket when they weren’t performing. And yet, through one of the strangest ever twists of fate, Joannes managed to save Lazarus’s life.

According to the historian Henri Sauval, who spoke to Lazarus on numerous occasions, Lazarus once killed a man, angry at being teased. Yet the court decided they had no choice but to let Lazarus go. They couldn’t execute him because it would be unfair to also kill Joannes, an innocent man. 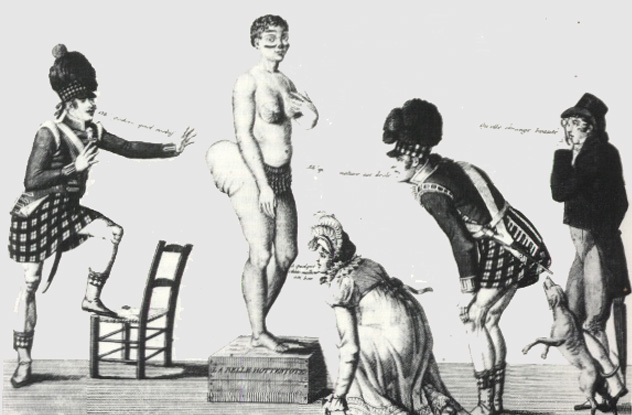 Her real name was Sara Baartman and she was a member of the Khoikhoi tribe in South Africa during the 18th and 19th centuries. After European-led soldiers ambushed her family and friends during her betrothal ceremony, Baartman was left orphaned and widowed at the age of 16. Taken to Cape Town, she became a domestic servant, until she was taken next to England five years later. Due to her hugely ample hindquarters, Baartman was extremely popular with the English, who ogled her half-naked body for four years.

She later went to France, where she was displayed under the name Hottentot Venus, now kept completely naked but for a loincloth. She died at 26, and her brain and genitalia were cut out and put on display until 1974. Her remains were finally returned to South Africa in 2002, thanks to eight years of work from Nelson Mandela. 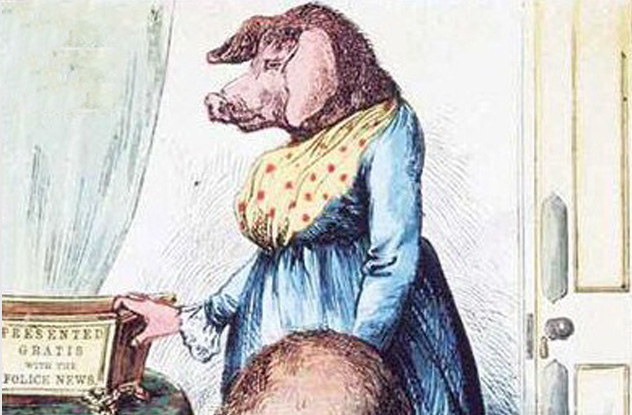 Originating sometime in the 17th century, the idea of a pig-faced lady was quite popular in England. During the winter of 1814–1815, rumors abounded throughout London of a young daughter of a noble family, who just happened to have the face of a pig. Various newspapers proudly declared they had witnesses who could testify that they had seen the lady with their own eyes. Due to the popularity of this rumor, circuses began to declare they had their own pig-faced ladies.

All were hoaxes. The worst of these may have been a particular fair in the 1850s. The pig-faced lady they claimed to have in their possession was nothing but a drunken, shaven bear dressed in women’s clothing.