We all know T. rex as a huge, ferocious monster from the past that wants nothing more than to consume everything that lives. However, in real life, Tyrannosaurus rex hardly lives up to its Hollywood reputation. In fact, it is now widely believed in the scientific community that Tyrannosaurus rex was not a hunter at all.

However, T. rex was not the only giant carnivorous dinosaur to exist during the Mesozoic Era. Compared to some of the truly horrifying theropods out there, Tyrannosaurus rex looks like a cute puppy dog. Although T. rex will always be the “king of the dinosaurs” in our hearts, it is time to examine some contenders that might overthrow this behemoth for the title. 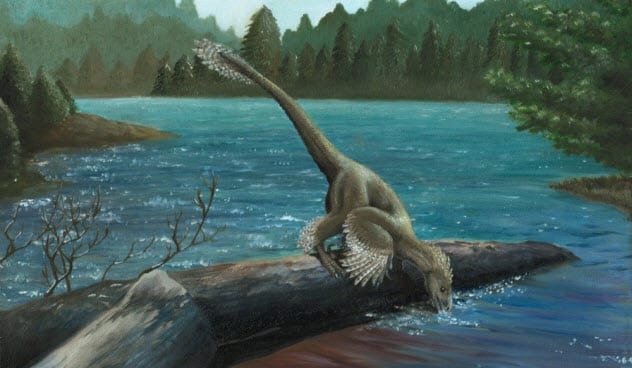 Sinornithosaurus was a small, feathered dromaeosaur that was closely related to Velociraptor. Sinornithosaurus had a long, slender appearance with a crocodilian-like snout and a large, toothy grin. It looked like a small birdlike lizard with large feathers full of color.

It is rather possible that the creatures hunted in packs like other dromaeosaurs, although there is not a lot of evidence to support that theory. What sets Sinornithosaurus apart is the fact that scientists now believe that it is the first recorded dinosaur to have a venomous bite.

Currently, the type of venom created by Sinornithosaurus is unknown. However, just the idea of Velociraptor-like creatures wandering the prehistoric night and jumping out of the shadows to kill its enemies in a single bite sends shivers down the spine.[1] 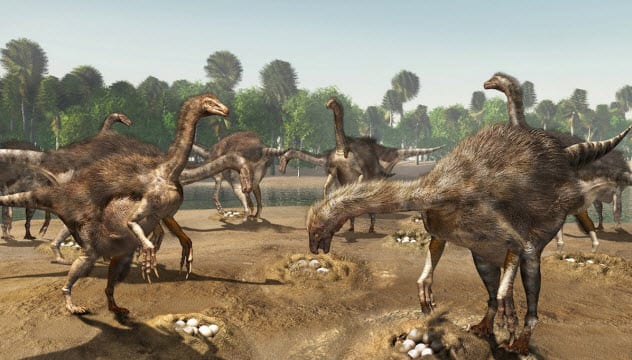 Therizinosaurus was a huge, 100-kilogram (220 lb) monstrosity which lived in what is now Mongolia. It had long, needlelike claws and a neck like a giraffe. With its forearms, however, it’s clear why it was originally thought to be a giant extinct sea turtle. Later, it was properly identified as a distant relative to Tyrannosaurus rex.

Although Therizinosaurus had claws that would make Freddy Krueger jealous, they were mostly used for gathering vegetation. However, don’t think of this creature as a friendly giant. Currently, the scientific community is divided on whether Therizinosaurus was a pure vegetarian or occasionally consumed flesh along with its veggies.

However, the lack of clarity about its diet made it even scarier. The only thing that could possibly be more frightening than a Therizinosaurus is whether it would consider you a nuisance or lunch.[2] 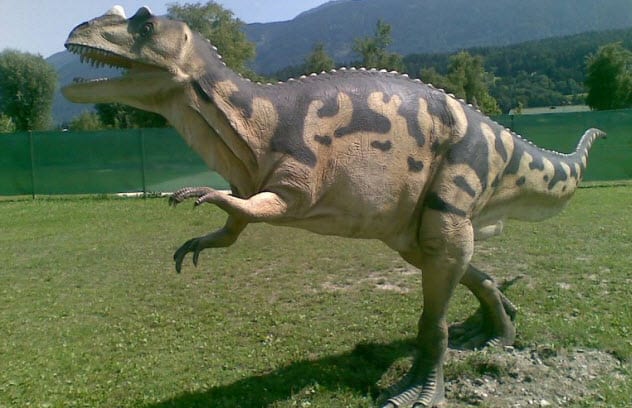 Ceratosaurus was a medium-sized theropod which lived during the Jurassic Period in what is now North America and Europe. It had a bulky appearance with short, stubby arms and a large hornlike protrusion from its skull.[3]

Although it may seem like a generic Tyrannosaurus rex prototype with simple regional differences at first glance, do not be fooled by its simplicity. It was a fierce hunter that relied on one key advantage over all its other close cousins—it had four fingers, instead of the usual three, on both hands.

This seemingly tiny advantage led to Ceratosaurus rising rather high in the Late Jurassic food chain. As one of its greatest accomplishments, Ceratosaurus lived for more than 11 million years. With this amazing feat of survival and the creature’s unique features, it’s a shame that Ceratosaurus does not get as much attention as some of the other dinosaurs on this list. 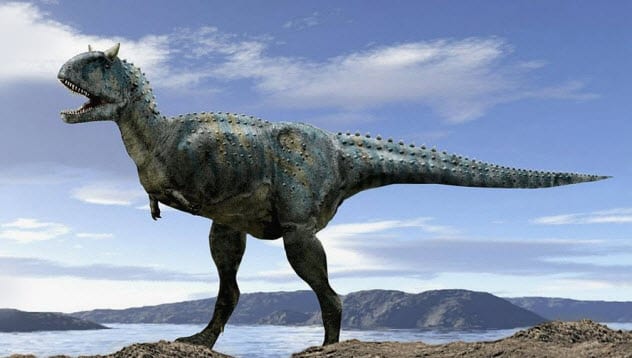 Carnotaurus was a Late Cretaceous–era theropod that lived in much of what is now South America. It was incredibly bulky with large spikes and bulges all over its body.

Carnotaurus was unique among the dinosaurs due to its set of demonic horns that cast a shadow over its equally horrifying reptilian eyes. Its horns were so prominent that its name means “meat-eating bull” in Latin.

It also had tiny arms that would have made Tyrannosaurus rex let out a slight giggle. In fact, they were so small that some paleontologists have argued that the arms served no purpose at all. However, don’t let this fool you for a second. It’s now widely believed that Carnotaurus was even faster than the current king of the dinosaurs, Tyrannosaurus rex.[4] 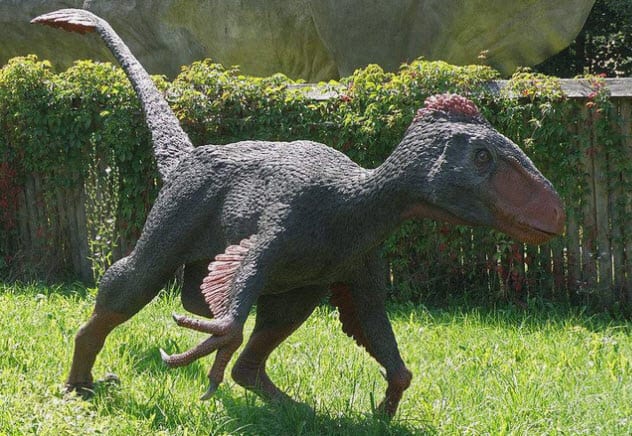 Utahraptor was an Early Cretaceous dromaeosaur (feathered theropod) that lived in what is now Utah. With its long tail and forearms, the creature had a sleek appearance that truly resembled a larger version of the common Velociraptor.

Utahraptor was the largest dromaeosaur by far at 7 meters (23 ft) in length. Its flesh-tearing claws measured an astounding 23 centimeters (9 in). Couple that with its estimated weight of 900 kilograms (2,000 lb), and you have a serious threat on your hands.[5]

Utahraptor also had a distinct advantage over all the other smaller raptors. It was the only dromaeosaur in American history to be voted in as an official state dinosaur—in this case, in Utah! With its sharp claws, teeth, and new legal status, Utahraptor is a dinosaur that could a contender for the title of “king of the dinosaurs.” 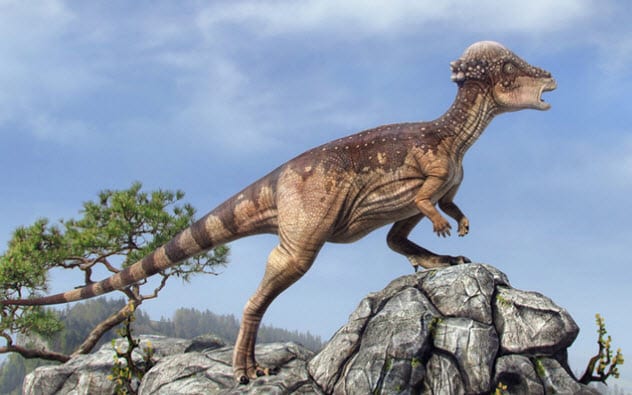 Pachycephalosaurus was an herbivorous, bipedal dinosaur from the order Ornithischia. It lived during the Late Cretaceous Period alongside T. rex and Triceratops.

Pachycephalosaurus had a surprisingly bulky appearance with thick legs, tail, and neck. However, its defining feature was its thick, bone-encrusted skull. Its skull may have been used as a weapon against predators or rivals. In fact, its skull was so adapted for this purpose that it was 30 times thicker than a human skull.

What is truly astonishing, though, is that Pachycephalosaurus might not be the innocent herbivore we all originally envisioned. Instead, it may have been a carnivore. So, Pachycephalosaurus would have rammed you with a skull 30 times thicker than that of a human, but it would have also tried to consume you for dinner.[6] 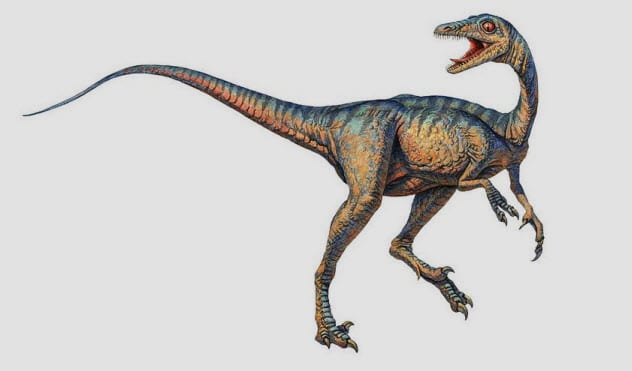 Troodon was a bipedal theropod from the Cretaceous Period with an estimated length of 3 meters (11 ft) from snout to tail tip. The creature had a thin, torpedolike appearance with sharp teeth and enormous eyes for its size.

It is speculated that Troodon did not have particularly long arms, but the creature did have more teeth than any other recorded theropod. Troodon was also fast. With a maximum estimated running speed of 64 kilometers per hour (40 mph), it would have been almost as swift as the fastest racehorse ever recorded.

However, the most incredible aspect of Troodon was its unusually high intelligence. In fact, it’s theorized that Troodon was the smartest dinosaur by far. As a result, a hunting Troodon would not be a mindless beast but instead an intelligent, graceful hunter.[7] 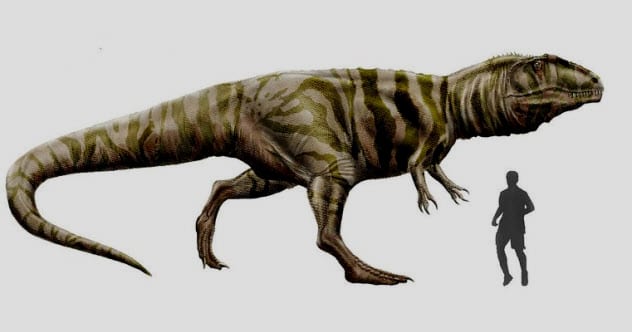 Giganotosaurus was a Late Cretaceous, carnivorous theropod that lived in what is now South America. It had a somewhat bulky appearance—with thick legs, torso, and neck—and looked rather similar to the majority of giant theropods of the time.

However, do not be fooled by its simplicity as Giganotosaurus was slightly larger than Tyrannosaurus rex. In fact, Giganotosaurus is believed to have been the sole predator of Argentinosaurus, the largest land animal to ever exist.

Giganotosaurus was also rather quick. It could run at a maximum speed of 50 kilometers per hour (31 mph), swifter than the fastest-recorded human in history. So it is clear why Giganotosaurus was at the top of the food chain of Late Cretaceous South America.[8] 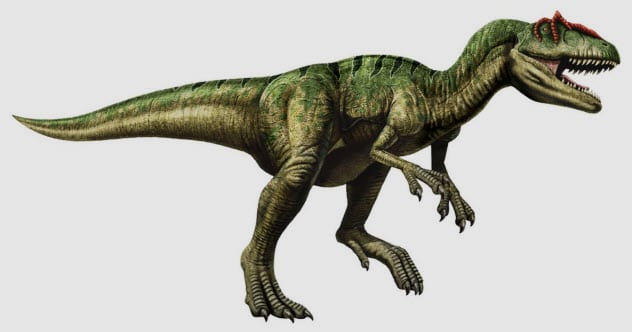 Perhaps the best-known dinosaur on this list, Allosaurus was a Jurassic-era theropod which lived in what is now the United States Of America. The creature had a surprisingly sleek appearance for a large theropod, with a thin neck and semi-thick legs.

Unlike other theropods that lived during the Jurassic Period, Allosaurus was built for speed and was the fastest large theropod at the time. With a maximum running speed of 21 kilometers per hour (13 mph), Allosaurus was able to easily outrun its prey on a regular basis.

Allosaurus was also rather long for its time—between 8–11 meters (25–35 ft) long from snout to tail tip.[9] Allosaurus was so different from other Jurassic-era dinosaurs that its name actually means “Different Lizard.” Apparently, the paleontologist that named Allosaurus thought that he was so scary and unique that he deserved to be named as such. 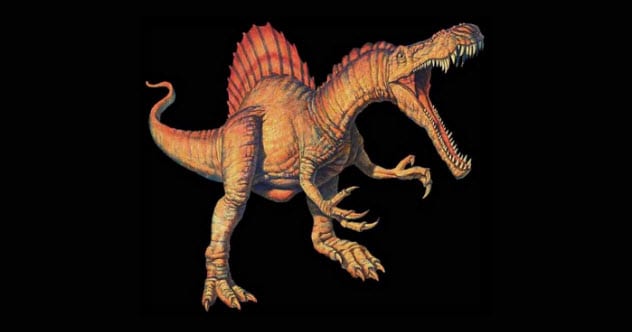 Spinosaurus was a carnivorous theropod that lived during the Cretaceous Period in what is now North Africa. It had a sleek, torpedolike appearance with a thin neck, tail, legs, and skull. It was the largest predatory dinosaur of all time, even bigger than the theropods Tyrannosaurus rex or Giganotosaurus.

Spinosaurus‘s most obvious claim to fame was the giant sail running down its back. Although the true purpose of the sail is unknown, the leading scientific theory says that it was used to attract mates in a similar manner to the modern-day peacock’s tail. Still, the debate rages on.[10]

Spinosaurus was also the only dinosaur that actively tangled with Sarcosuchus, a 12-meter (40 ft), 10-ton crocodile. As a result, it is clear that Spinosaurus was a dinosaur more than capable of holding the title of “king of the dinosaurs.”

Howdy! I am an intermediate freelance writer who has been writing for the Internet on and off for four years now. This is my very first time writing for Listverse, and I am happy to contribute to this great website!

Read more fascinating and frightening facts about dinosaurs on 10 Fascinating New Things We Learned About Dinosaurs In 2017 and 10 Reasons Real T-Rexes Were Scarier Than Anything In The Movies.