Sports are such an ubiquitous presence in our daily lives that it is hard to imagine a time when they didn’t exist. While modern sports can usually only trace their roots back a hundred years or so, ancient humans had their own games which pitted teams against each other, often with bloody results. 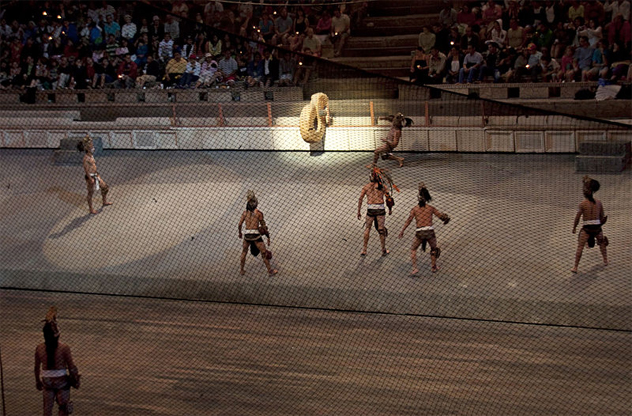 Littered with cultural and religious significance, the sport known to the Mayans as pitz is one of the oldest games in human history, believed to have originated as early as 2,500 BC. A number of different variations existed, with the rules on ball size or what was used to hit it changing to fit the context of the game. Nevertheless, the game was originally much like racquetball, with the later addition of hoops that served as goals. The main focus of every town in the Mayan empire, the ball court was often used as a proxy for war, a way for enemies to settle their disputes without bloodshed.

Human sacrifice also played a role—captured kings or the captains of the losing team would often be decapitated after the game, although the games may have just been an elaborate ritual, with the outcome predetermined. 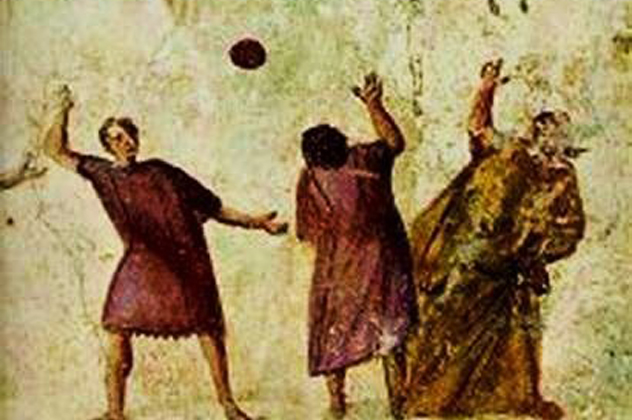 An early predecessor to the modern sport of rugby, harpastum was an ancient Roman game played with a small, hard ball of the same name. Derived from two early Greek games, the goal of the game varied often, but each version included two teams. Some variations involved a single player in the middle of a scrum, attempting to grasp the harpastum and escape, with the opponents trying to keep him inside and away from the ball.

Other versions were more like rugby, with two evenly matched teams squaring off on a field, with goals on either side. Passes, as well as feints, were common, as the goal was to get the ball to the opposite end of the field, and injuries abounded since there were no rules on grappling. A predetermined amount of time was agreed upon and the winner was the team with the most points at the end.

Galen, the famous Roman physician, claimed that harpastum was one of the greatest exercises, because it was cheap, easy, and could be tailored to fit the skill level of any player. 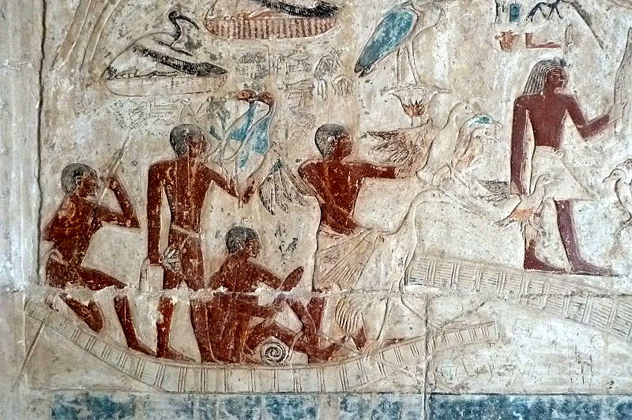 The game of choice for the poor and lower-class fisherman of the Nile River, fisherman jousting was exactly what it sounds like. Two teams of boatmen would square off, utilizing their hands or feet to knock the other team off balance and send them careening into the water. Papyrus boats, propelled by poles which would also be used to defeat the other team, were the stage for the contests, some of which were believed to have been impromptu games designed to settle territorial disputes.

Generally a very violent sport, fisherman jousting often ended in the deaths of a large number of the participants. Hippos and crocodiles roamed the waters, ready to maim the contestants who fell overboard. In addition, swimming was not as universally practiced as it is today, and many of the fishermen drowned simply because they didn’t know how to swim.

Some scholars believe there may have been a religious aspect to some of the fights as well, with murals depicting competing boats filled with offerings. The boatmen appear to be racing to be the first to honor the gods, with combat coming into play during a close race. 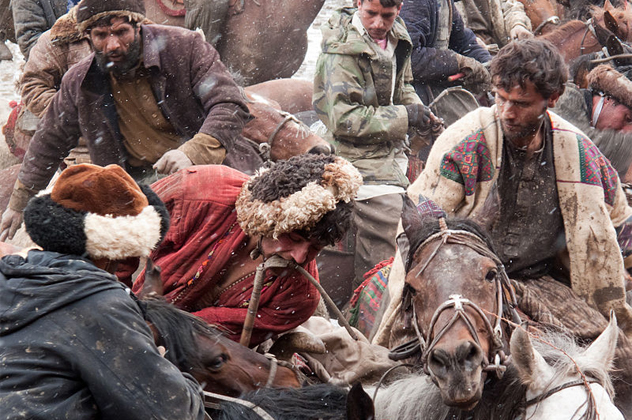 Developed by the Turkic people sometime between the 10th and 15th centuries, the sport of buzkashi is still played to this day, predominately by the descendents of its inventors. The national sport of Afghanistan, it involves two teams, riding on horseback, whose goal is to drag a headless goat carcass across the field and drop it inside a predetermined area, usually a circle. Occasionally, a sheep or calf is used instead of a goat.

Banned under the Taliban’s rule, buzkashi is a violent sport, with the riders equipped with whips with which to beat the other riders’ horses. They’re not supposed to use their whips on the riders themselves, but that rule is often disregarded. Often, the social status derived from owning the horses of the winning team is enough to cover the costs associated with maintaining the health of the animals between matches. The origins of this violent sport are lost in time, but the story goes that Genghis Khan and his Mongols would steal livestock from the Turkic people, who would brave death to snatch it back from them on horseback. 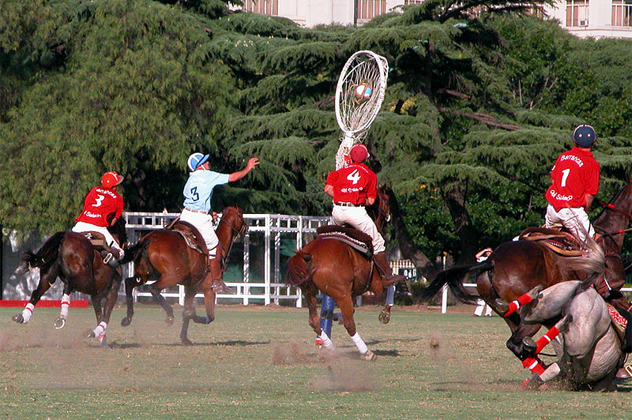 Derived from the Spanish word for duck and also known as horseball, pato is the official sport of Argentina and an eclectic mix of polo and basketball. The youngest sport on this list, it was created in the 1500s and was originally played with a duck in a basket rather than the ball that today’s participants use. A violent sport, riders would often attack each other in order to win, often because a large amount of money was at stake.

Throughout its history, the sport has been banned numerous times, mostly due to the increasing violence which often resulted in the deaths of many of its participants. In the 17th century, the Catholic church was so concerned with the sport that they would excommunicate anyone found playing. Up until the 20th century, it remained underground, until rule changes made it much safer to play; the duck in a basket was also replaced with a unique ball with six leather handles. The goals themselves have changed over time, evolving from a simple box on the ground to a hoop with a net that is in use today. 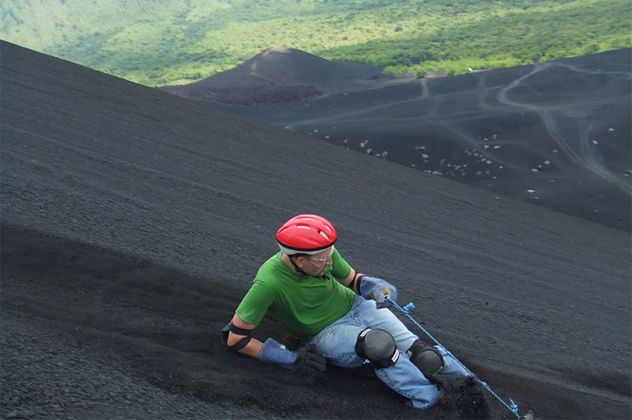 One of the more dangerous entries on this list, he’e hölua (Hawaiian for “sled surfing”) is a sport which originated on the Hawaiian Islands over 2,000 years ago. It consists of a dangerous trek up the side of a volcano, with a large sled made of wood and coconut fibers. Once at the top, the rider, or team of riders, would race down the slope, either on their stomachs or in a typical surfing pose.

Speeds of up to 80 kilometers per hour (50 mph) were common, and the races were seen as tributes to Pele, the Hawaiian goddess of fire and volcanoes. Brought to a stop by 19th century Christian missionaries, who saw the sport as dangerous and a waste of time, it has been recently revived by native Hawaiians trying to reconnect with their heritage.

Pelota purépecha is a pre-Hispanic game similar to field hockey, but with a fiery twist: The sport is played with a ball which is lit on fire. Named for its inventors, the indigenous Purépecha people of what is now the Mexican state of Michoacán, the game involved a ball which had been smeared with pine resin and lit on fire, which was batted around by players armed with wooden sticks. Goals were set up on either side of a stretch of field and the goal was to knock the ball across the line.

The ball, known as a zapandukua, was normally made up of interwoven cloth and twine, and the game was normally played at night, as the ball made for more of a spectacle under the light of the moon. Like many of the games created by the indigenous people of Mexico, pelota purépecha has been largely forgotten, but concerted efforts by the Mexican government are helping to raise awareness for this piece of national history. 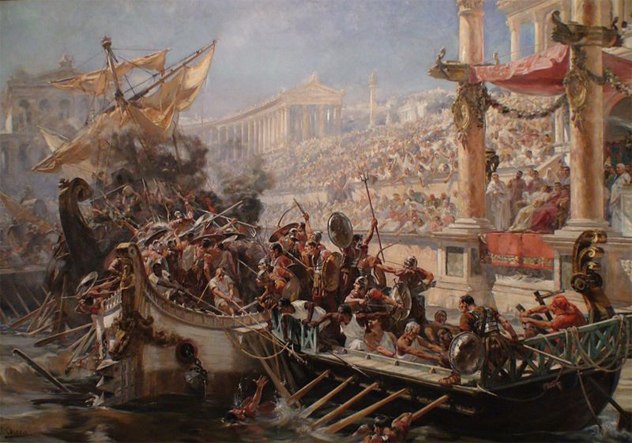 Less well-known than the gladiator battles which frequented the Roman sports world, a naumachia was a mock naval battle, played in front of a crowd of onlookers. Normally pitting condemned criminals against each other, they often took place in man-made basins designed specifically for this purpose. The earliest recorded example of a naumachia was in 46 BC, begun by none other than Julius Caesar, who used it to celebrate his military accomplishments in a Roman ritual known as a triumph.

Basically, two ships were placed on either side, filled with “willing” participants, and then the fighting began. It lasted until one side was completely killed. Some of them were so elaborate that sea creatures were brought in and placed in the waters. The largest recorded naumachia was set up by Emperor Claudius in 52 AD, with 100 ships and over 19,000 men participating in the game. 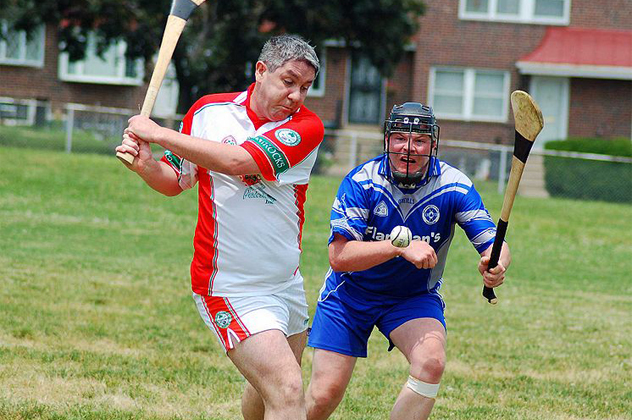 One of the oldest games still played today, hurling is sort of like hockey mixed with lacrosse. Basically, there are two teams and the object is for the players to use a wooden stick, known as a hurley, to hit a small ball called a sliotar into a goal. The fastest field sport in the world, ball speeds reaching up to 145 kilometers per hour (90 mph) are extremely common, and participants are often left bruised and bloodied after a match.

However, that’s nothing compared to the 3,000-year-old history of the sport, where it was more like warfare, with relatively few rules and matches that could last for days. In addition, there could be teams numbering in the hundreds squaring off against one another, only adding to the violence. Believed to have been brought to Ireland by the Celts, the sport has tales of mythological heroes playing which date as far back as the 12th century BC. 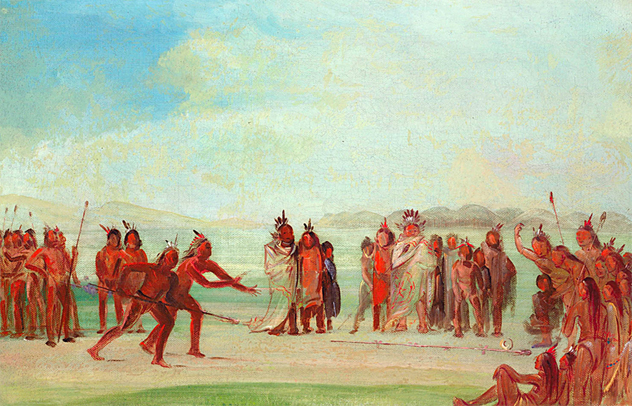 One of the earliest sports played in what is now the United States, chunkey was developed by the Mississippian culture and centered around the ancient city of Cahokia. Basically, any number of people participated on either of two teams, though it was usually just one-on-one. A small stone disk was rolled from the starting point and the opposing teams would throw spears at the area at which they thought the disk would end up.

Spreading to much of the Native Americans of the Southeast, chunkey is believed to have played a major role in joining the different tribes together, as they formed one of the largest North American civilizations north of Mesoamerica. Each tribe had unique rules, but the spirit of the game was the same. The sport was taken so seriously, and gambling so ingrained in the culture of chunkey, that losers would even commit suicide in some cases, normally because they had wagered all of their possessions.