Murder is as old as mankind. The archaeological record is littered with victims of ritual killings, revenge, rival culling, and genocide. Here is a list of intriguing murder mysteries from antiquity. Some will challenge our definition of murder. Is it homicide to kill a Neanderthal? Even after millennia, the evidence of these untimely deaths remains. Their specter looms over us, and the physical remains tantalize us with questions we may never answer. After examining the evidence of ancient murder mysteries, we are left with one revelation: Human nature doesn’t change. 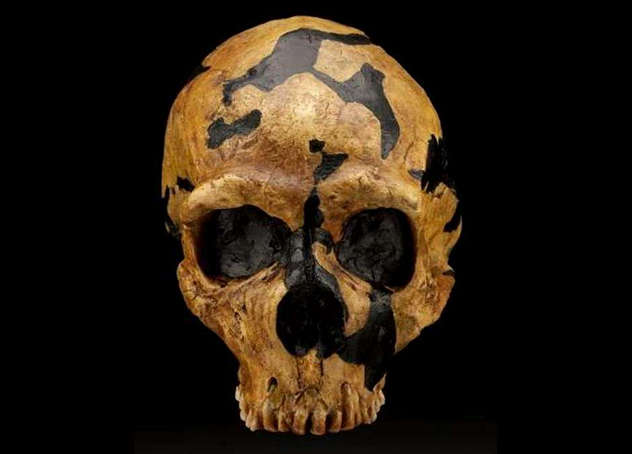 In the Zagros Mountains of Northern Iraq, archaeologists unearthed a Neanderthal murder victim. The specimen, named “Shanidar 3,” was a 40–50 year old and died of a puncture wound to his ninth rib. After testing Paleolithic weapons on goat and pig carcasses, experts determined a lightweight throwing spear caused the damage. Neanderthals had long, heavy stabbing spears, but they did not have projectile technology.

The prime suspect: a modern human. Was it a territorial dispute? An accidental encounter with fatal consequences? Or were the modern humans hungry? Evidence has emerged that modern man cannibalized Neanderthals. Tool marks on Neanderthal jawbones from Les Rois cave in southwestern France match those on slaughtered reindeer remains from the area. Irregular groves in jaws mean one thing: Neanderthal tongues were sliced out—a Paleolithic delicacy. Traces of pollen on remains deep within the Shanidar cave suggest that Neanderthals buried flowers with their dead. In the quest for hominid world domination, who were the real savages? 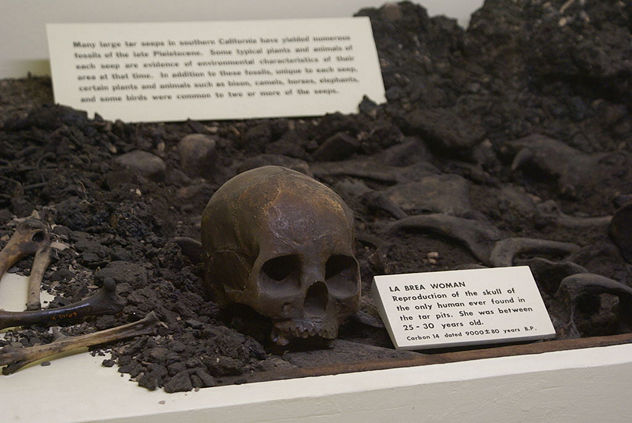 La Brea Tar Pits are a series of 100 asphalt pools bubbling in the heart of Los Angeles. For over 40,000 years, the pits have claimed many victims: saber tooth tigers, imperial mammoths, dire wolves, and La Brea Woman, who was pulled from the tar in 1914. She lived 9,000 years ago—the oldest known Californian, and possibly the state’s first murder victim. She was about 142 centimeters (4’8″), with a fractured skull and a broken jaw. The hole in her head was caused by blunt force trauma. A piece of her skull is still missing. Some believe she was killed elsewhere, and dumped into a shallow tar pool. Others suggest La Brea Woman was placed in the tar pits with tender loving care. The internment of dog bones beside her may indicate ceremonial burial.

Intrigue surrounding her bones hangs heavy—mostly related to the legal blowback from displaying Native American remains. The skull on display in George C. Page Museum is cast from the original find—the rest of the skeleton are the remains of a Pakistani girl, dyed to look old, with sawed-off femurs to match the stature of La Brea Woman. The museum mannequin’s likeness of La Brea Woman ignores her orthodontic shortcomings, including missing teeth, impacted molars, and an ectopic tooth that would have shown above her lip. 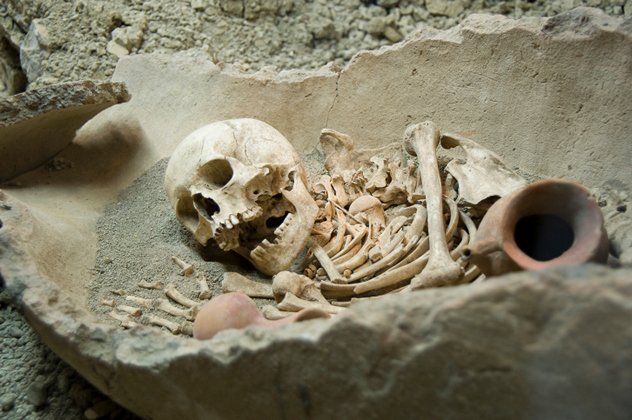 Excavations in the German town of Herxheim gave us a window into the world of 7,000 years ago. They unearthed large structures, pottery, and victims of cannibalism. At least 10 individuals had cut and scrape marks indicative of butchering techniques. Some bones had chew marks. Others were deliberately smashed, as if to access marrow. Ribs were cut away from spine, muscles removed from head to allow access to skull cap, tongues cut out, flesh from limbs removed. There were two distinct types of marks—skinning cuts, and deeper cuts to access meat. There is no evidence whether they were cooked or eaten raw—although markings on remains suggest spit roasting.

Some propose an alternative theory: reburial. The strange markings on the Herxheim skeletons may be the result of being moved. No one doubts that these remains underwent extensive trauma, including shattered faces. Were these victims of war? Ritual cannibalism? Or hunger? Historians believe that Germany experienced an agricultural collapse around this period, 500 years after Neolithic farming entered the region. This was a period of violence and upheavals. Over 500 bodies have been discovered at the site—and only a handful have been examined for evidence of man-eating. The final count of Herxheim cannibalism victims could be significantly higher. 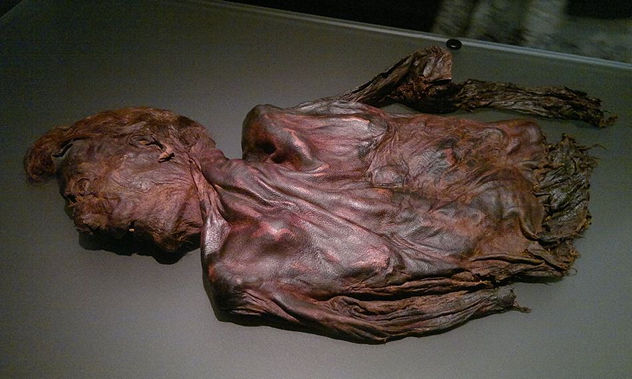 In 2003, a bog-cutting machine in County Meath, Ireland, unearthed Clonycavan Man—a murder victim from 2,300 years ago. Clonycavan Man received three axe blows to the head, one to the chest, and had his nose smashed. There were signs of torture before death. His nipples had been cut off, before he was disemboweled and dumped into a bog. Peat bog chemistry mummifies bodies. The environment is cold, acidic, and oxygen free—preventing bacterial growth.

The most popular theory is that Clonycavan Man was a victim of ritual murder. Sucking a king’s nipple was a sign of submission in ancient Ireland. The man-teat mutilation suggests he was a failed king, or candidate for kingship. Clonycavan Man showed no sign of physical labor, had a diet rich in vegetables, and stood at just 157 centimeters (5’2″). To compensate for his stature, he used exotic hair gel for volume. The product contained plant oil, mixed with resin from Spain and Southwest France. Was this a ritual killing? Or did people just get fed up with fancy pants?

In the arid lowlands of Northern Peru, archaeologists unearthed a grave complex from the Moche civilization, containing over 100 victims of brutal deaths. Their skeletal remains reflect a smorgasbord of terror. They were skinned alive, drained of blood, decapitated, or bound and left for the vultures. All the victims were young men, cast into open pits, alone or in small groups. The Moche came before the Incas. Moche civilization thrived in the arid valleys of Peru, in A.D. 150–750. They were advanced builders, artists with irrigation techniques that made their land even more fertile than modern techniques.

But their visual art reflects a darker aspect of their culture: ultra-violence. Images depict adversaries humiliated, tortured, and executed. Experts believe that this was all Moche-on-Moche violence. Hair and teeth analysis showed some victims’ diet was rich in marine life. Others came from higher elevations. The current theory is that Moche from various regions would square off in pageantry combat, in which the losers were sacrificed. Only the Moche know why captives in non-lethal warfare would be treated so brutally. 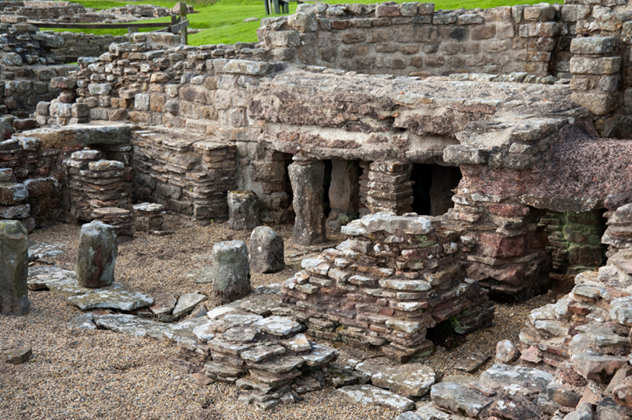 In 2010, a skeleton of a child was found in a shallow pit under the barracks at Vindolanda—a Roman fort just south of Hadrian’s Wall, in Britain. Initially thought to be a dog, the victim was about 10 and of indeterminate sex. Experts have dubbed the victim “Georgie.” This hasty burial was a violation of Roman funerary rites. The dead needed to be cremated, or buried away from habitations. Concealment of the body was a crime. This suggests murder. The cause of death was likely a blow to the head. Most of the skeletal remains are in good condition. But almost nothing of the skull remains.

The plot thickened when experts discovered the child was not a local. Isotope analysis of tooth enamel revealed that the victim came from the Mediterranean. Was Georgie a child of one of the soldiers? Or a Roman slave? Some have tried to place the blame on the Fourth Cohort of Gaul, who formed the garrison at the time of the murder. The evidence is circumstantial at best.

Excavations on a fifth-century fort on the Island of Oland, in the Baltic Sea, uncovered a scene frozen in time. Experts dubbed it the “Swedish Pompeii.” Volcanic ash had nothing to do with it. Violence was the culprit. So far, 10 skeletons have been discovered, plus scattered remains suggesting scores of additional victims. The leading theory: The fort was ambushed and the inhabitants massacred. Cremation was customary in Scandinavia during this era. The bodies at Oland weren’t even buried. There was no one left to tend to the dead. The plot thickens. The attackers left behind valuables, like jewelry. It was as if slaughter was their only goal. Why?

We cannot know for certain, but historians refer to this restless era of history as the Migration Period. Scandinavians ventured south, into the declining Roman Empire. Anything could have sparked violence between rival raiding parties. Experts suggest that the site is so well preserved because the massacre created an exclusion zone, or taboo surrounding the fort. No one wanted to get near it. 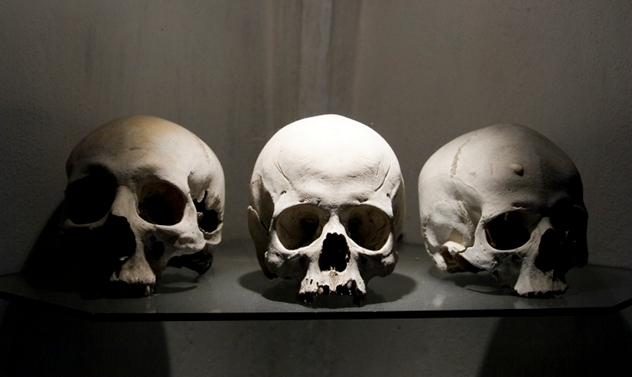 In 1964, a farmer discovered the remains of three men in a pit grave on the flood pain of Sacramento River. They had died about 1,500 years ago, and all showed signs of extreme physical trauma. One victim had seven arrows embedded in his ribs. Obsidian blades were still lodged in the spines of the other two. This was not a proper burial. Their bodies were splayed out chaotically. There were no grave goods. Experts believe that 560 years ago, central California was a war zone marked by violent territorial battles. Fractured skulls, broken bones, and trophies made of human remains fill the archaeological record from this period.

Isotope analysis of their teeth revealed that the prodigal sons were born and raised locally, but had spent most of their adult life elsewhere—north of the Sacramento River, suggesting that hunter-gatherers had been even more mobile than previously thought. Why had the prodigal sons returned home? And who was waiting for them?

In 2005, excavations in the ancient Mayan city of Cancuen unearthed over 50 skeletons in long-abandoned sacred pools and shallow graves. They fell victim to murder and dismemberment. The method: lance thrusts and axe blows to the head and neck. Men, women, and children—no one was spared. With palaces destroyed, monuments leveled, and the entire royal court slain—it was as if the city itself were murdered. Cancuen never recovered. Like many other Mayan cities in the region, it remained abandoned.

The murderers wanted their victims looking good. They were buried in their finest apparel and accessories, including jaguar shell necklaces. This devastation is indicative of the fall of Mayan civilization. The alien nature of the ultra-violence and disregard for the city infrastructure suggest it was conquered by people other than the Maya. Their identity remains a mystery.

In a remote New Mexico canyon, seven skeletons were unearthed that fell victim to ethnic cleansing. They were from the Gallina tribe. All met violent ends—including a two-year-old, whose skull was crushed. Some victims’ necks were snapped with such force that their skulls hung between shoulders. Gallina culture came into being in northwestern New Mexico around A.D. 1100, and vanished around 1275. Was it extinction or extermination? Less than 100 remains were ever found and nearly all were victims of homicide.

In 1100, the water table dropped in the region. Mega-drought conditions resulted. Corn productivity decreased. Violence followed. The Gallina were vulnerable. It is possible they were viewed as outsiders, or even the cause of the troubles. There is more to the Gallina mystery: Their skulls are shaped unlike any other. They are slightly deformed—flattened on the back just below the crown. We know this occurred during infancy. Was it caused by cradle boarding—being hauled around on wooden boards strapped to their mothers’ backs? Or was it the result of an unknown practice that went extinct with the Gallina?

Abrahm Rinquist is the Executive Director of the Winooski, VT Branch of the Helen Hartness Flanders Folklore Society. He is the co-author of “Codex Exotica” and “Song-Catcher: The Adventures of Blackwater Jukebox.”