Over the last 60 years of space exploration, humanity has accumulated millions of images. These days, they pour in faster than we can process them. And as we look at these amazing images, we sometimes recognize, or think we recognize, all manner of familiar objects. This is called pareidolia, the ability of humans to perceive familiar shapes in nature. We do this as children (or adults) when we try to find shapes in the clouds overhead.

In the past, mankind looked up at the night sky and used pareidolia to create the shapes we know as the constellations. Now, spacecraft, robots, and telescopes have given us a better idea of what is up there—but pareidolia is still with us. In a previous list, we looked at 10 incredible examples. Here are 10 more amazing extraterrestrial images that have played mind games on humans. 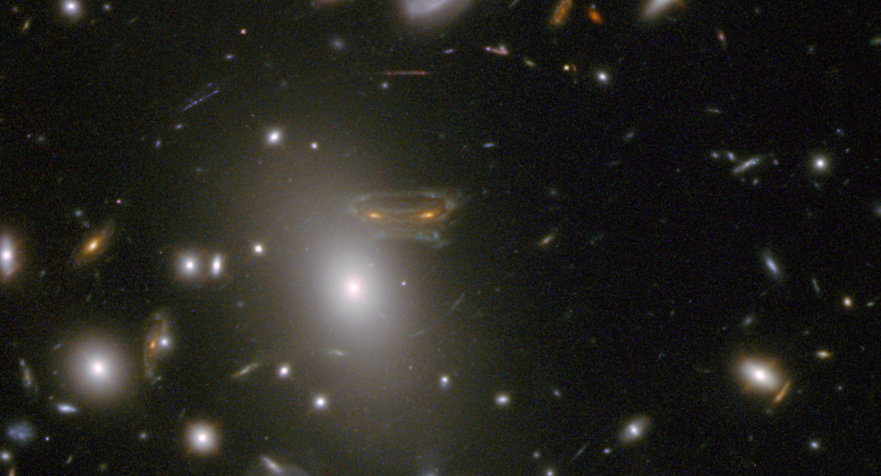 Three billion light-years from Earth is a cluster of galaxies known as Abell 68. In a Hubble Space Telescope image of the cluster, we can see a phenomenon known as gravitational lensing. This occurs when light is bent by an immense gravitational pull, often from a nearby galaxy cluster, until what we see becomes distorted, much like looking through a strong lens. In this case, gravitational lensing has warped one of the galaxies in Abell 62 until it looks like an 8-bit “Space Invaders” character. The distorting effect is so strong that the same galaxy actually appears twice in the image. Look for the sideways spiral just below and to the left of the Space Invader galaxy, at about 7 o’clock. That’s the exact same galaxy.

9Is That A Volcano Or Is Mars Just Happy To See Us?

Taken with the High Resolution Imaging Science Experiment (HiRISE) camera on the Mars Reconnaissance Orbiter, this image is an anaglyph, created by combining a stereo pair of photographs to create a picture that can be viewed in 3-D. If you have a pair of 3-D glasses lying around and want to check out more cool anaglyph images from Mars, go here.

This particular anaglyph shows a small Martian volcano called East Mareotis Tholus. The volcano itself is not visible in this image, as the area has been covered with windblown sand. However, the trench-like pit where the lava flowed from the summit of the volcano is clearly visible, stretching southwest toward an impact crater. Combined, the pit and the crater create a fairly distinctive image. 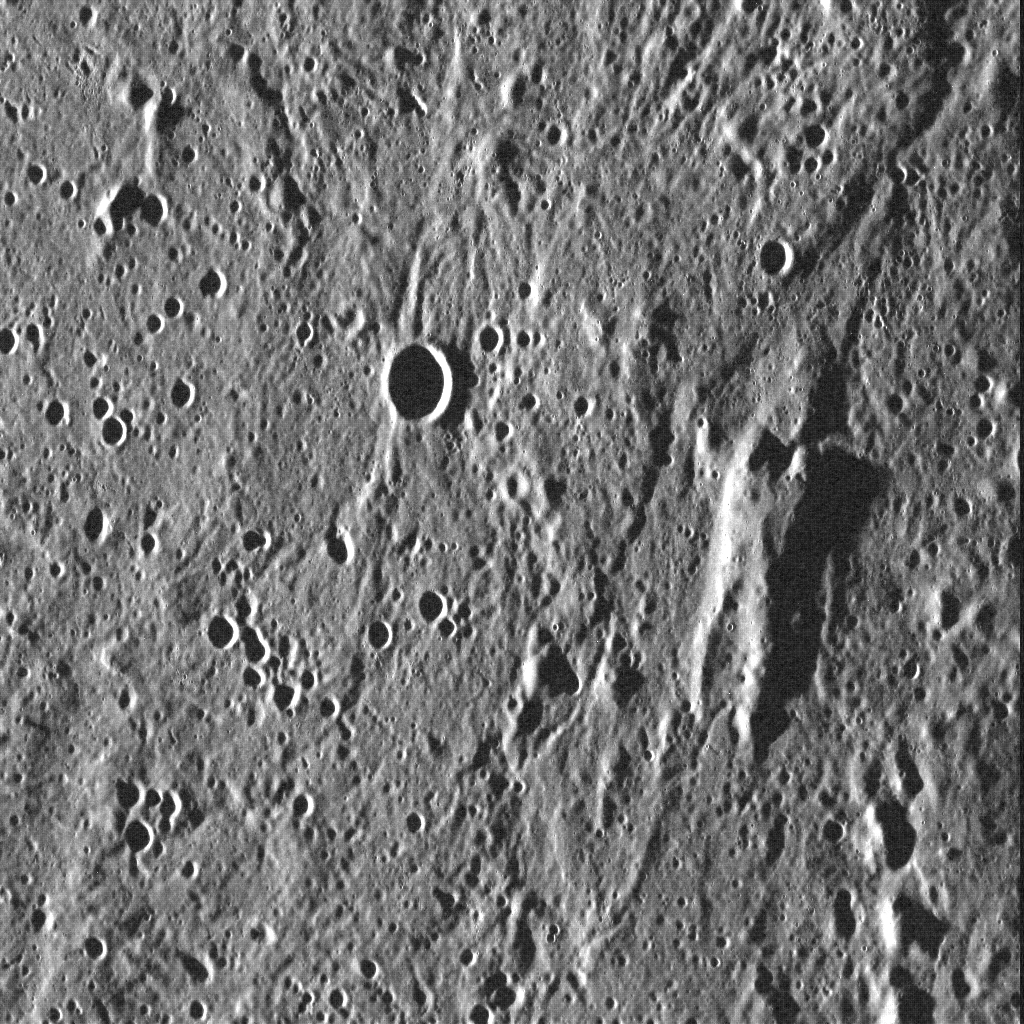 Mercury has traditionally been sort of the forgotten stepchild of planetary exploration. But that all changed in 2011, when NASA’s MESSENGER became the first spacecraft to orbit the planet. MESSENGER has sent over 200,000 images back to Earth, but perhaps none with more potential for pareidolia than this shot, which appears to show where Boba Fett temporarily stored Han Solo before he was delivered to Jabba the Hutt.

Solo was found hiding in the largest basin on Mercury, dubbed the Caloris Basin after the Latin word for “heat.” Shockingly, while NASA were quick to point out the resemblance, they do not currently believe the image depicts the Star Wars hero. Scientists actually think the formation may be some of the original material found in the area before impact debris created the basin. 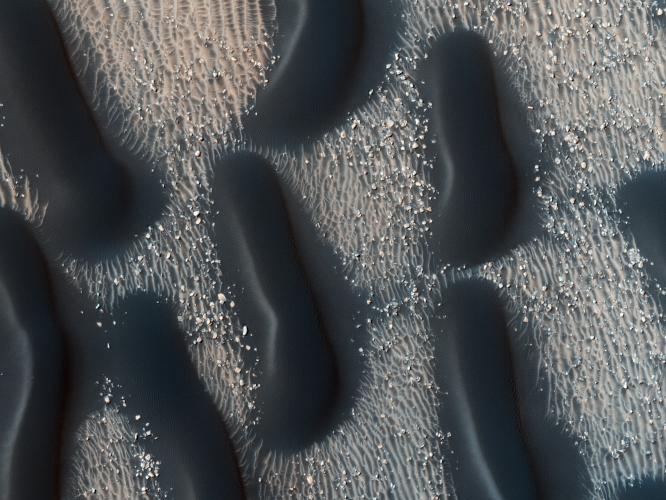 The insides of impact craters on Mars have provided some of the most fascinating images taken by the Mars Reconnaissance Orbiter. You would be forgiven if you looked at this image and thought you were seeing giant bacteria crawling across the planet, since that’s exactly what the dark-colored dunes that dot Proctor Crater in the southern highlands of Mars look like. But don’t panic just yet—the distinctive shapes are actually two different types of sand dunes. The smaller, brighter dunes provide a sharp contrast to the dark sand mounds that dwarf them. Though the material is probably around the same age, the darker dunes are the newer formations. Scientists believe the dark sand mounds are formed by seasonal winds pushing and blowing Martian sand. Pushed on by the Martian winds, the dunes actually move across the floor of the crater. 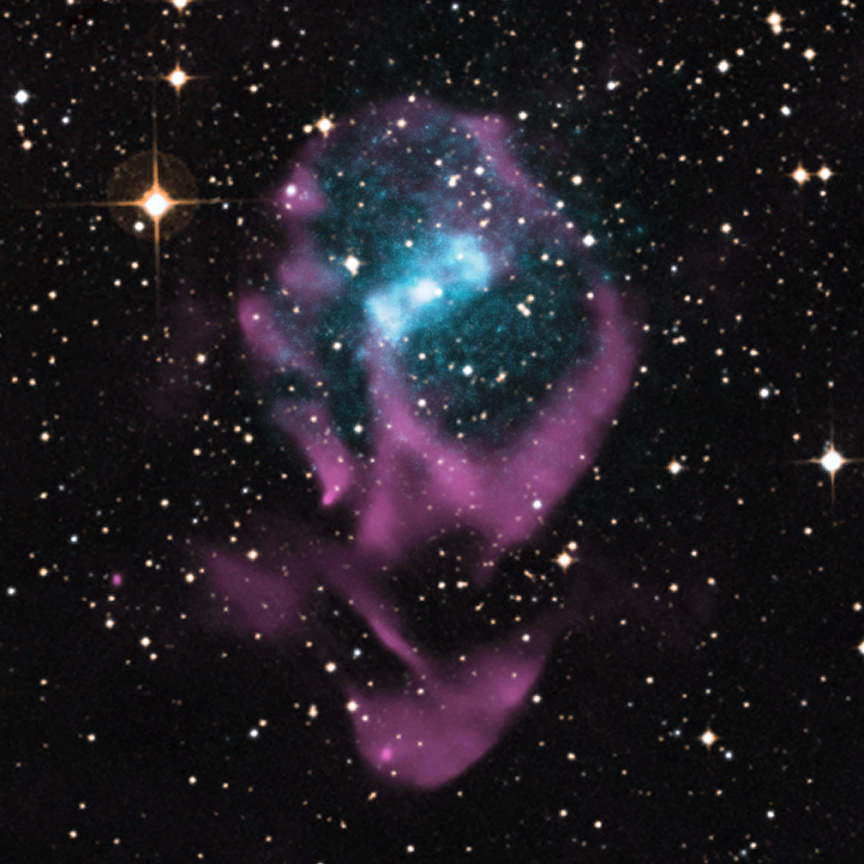 Anyone familiar with classic 1960s television might recognize the image of the X-ray binary star called Circinus X-1 as being remarkably similar to the Ebonites from the episode “Nightmare” of the groundbreaking science fiction series The Outer Limits. Fortunately, Circinus X-1 is not a race of aliens used by the US military to determine what it would take to break its soldiers—but as the youngest X-ray binary ever discovered, it is a singularly rare object.

Binary systems, as the name implies, contain twin stars orbiting around a common center of gravity. In an X-ray binary, either a dense neutron star or a black hole are locked in orbit with a normal star similar to our own sun. But it’s very good news that the Sun isn’t part of an X-ray binary. As the neutron star or black hole orbits the normal star, it acts like a galactic vampire, sucking away matter from the star and creating intense X-rays in the process. And X-rays are exactly what the Chandra X-ray Observatory is looking for.

Using Chandra, astronomers were able to determine the age of Circinus X-1. Normally, this would be almost impossible. The system’s neutron star gives off X-rays so intense they blind the instruments, much like a powerful flashlight would blind you if pointed straight at your face. However, if the flashlight grew dim, it would be possible to see the person holding it, and that’s exactly what happened when Circinus X-1’s neutron star entered a very faint state. This gave astronomers just enough time to observe how the remnants of the supernova that created the neutron star interacted with surrounding interstellar gas. This not only allowed them to accurately date Circinus X-1 (it’s less than 4,600 years old), it also provided this amazing image, which resembles a glowing skull in space. 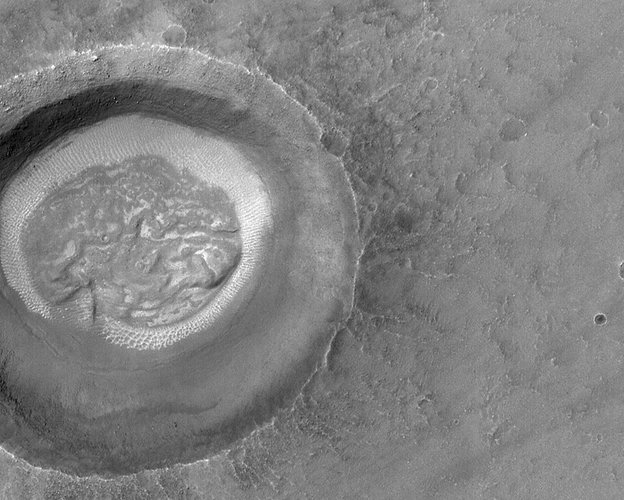 In the satirical film Starship Troopers, the main objective for the increasingly shell-shocked protagonists was to find and capture the Brain Bug—a super-smart enemy bug that looked like, well, a bug with a giant brain. Perhaps the planet Mars also has a brain bug? This could help explain the presence of a weird and poorly understood geological feature called “brain terrain.”

The phenomenon, which can reach up to a kilometer (0.6 mi) in diameter, is essentially a mystery to scientists, but their best guess is that the brain-like material inside this impact crater is caused by Martian debris—such as sand, rock, or other material—sitting atop a glacier of ice. Scientists have even identified two different types of “cells” that make up brain terrain: open cells (areas with convex boundaries and flat-floored depressions) and closed cells (domed mounds about 20 meters (67 ft) wide, with distinctive surface grooves). 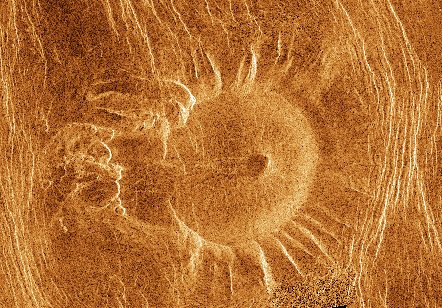 It is impossible for astronomers to see the surface of Venus—the planet’s thick atmosphere obscures all attempts using telescopes. But using radar, we can penetrate the clouds and get an idea of the planet’s appearance. In 1989, the USA launched Magellan, a spacecraft named after the explorer who first circumnavigated the Earth. Equipped with powerful radar, Magellan spent years mapping 98 percent of the planet’s surface—and finding volcanoes. Lots of volcanoes, many of a type geologists had never seen before. One particularly unusual type have simply become known as “ticks” (you can probably see why). Scientists do not really understand how these volcanoes gained their peculiar shape, with a flat, dome-like top and lava flows spreading out from all sides. One possible explanation for the tick “legs” is that they are not lava flows at all but simply avalanches or fractures on the sides of the volcano. Magellan discovered over 50 tick volcanoes on Venus.

3The Starfleet Emblem On Mars 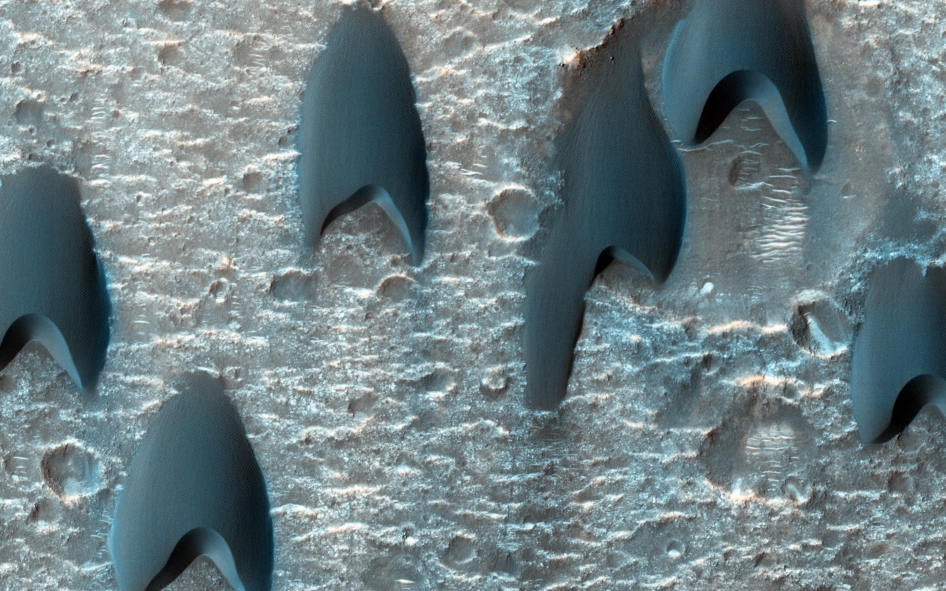 Apparently, 1960s science fiction television had an uncanny ability to predict the stunning space images we have collected over the last decade or so. When Gene Rodenberry’s Star Trek first aired in 1966, could he have predicted that, 47 years later, a spacecraft orbiting Mars would send back an image startling in its likeness to his Star Fleet emblem? Maybe so—his TV show predicted many things we take for granted today.

Spotted inside a large impact crater, the formations resemble similar mounds known as barchan dunes here on Earth. Scientists suspect they are formed in a similar way based on the interaction between Martian winds and Martian terrain. The dunes gain their black color from Martian balsatic rock. The dunes also resemble a flock of birds in formation, flying across the cratered landscape. 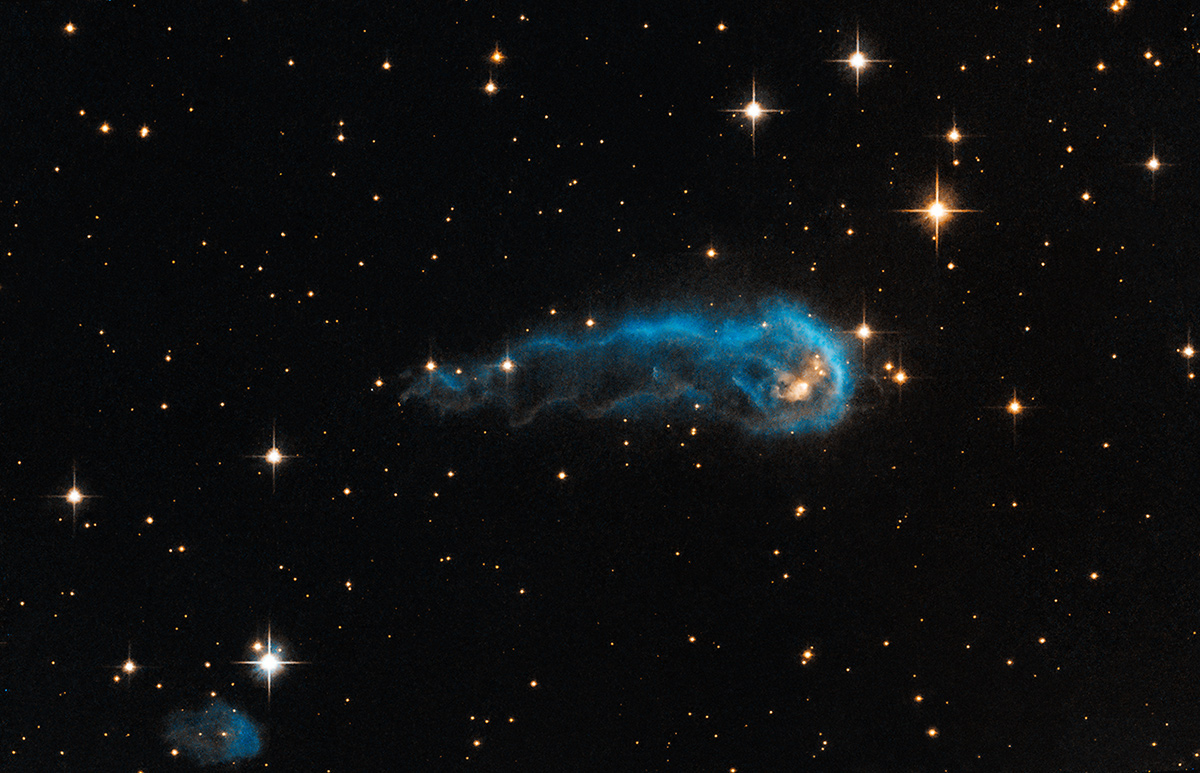 But don’t think the dunes are the only Star Trek–inspired example of space pariedolia. Behold the Doomsday Machine.

Also called “the space caterpillar” for its resemblance to the insect, to the expert eye of a science fiction fan, this is clearly the Doomsday Machine from the Star Trek episode of the same name. A Cold War parable and space-based take on Moby Dick rolled into one, the Doomsday Machine was a weapon that roamed the galaxy destroying and eating entire planets and solar systems. Never intended to be used (like the H-bomb), it was a deterrent to war that somehow got away. Like the white whale, a mad space captain became obsessed with destroying it.

In the TV series, the prop used for the Doomsday Machine was nothing more than a wind sock painted metallic silver. But it eerily resembles IRAS 20324+4057, a protostar collecting material in order to get itself started. This image was taken by the Hubble Space Telescope in conjunction with ground-based telescopes in 2006. It shows material being blasted away (right to left) from the protostar by radiation from the dense pack of stars that collectively make up Cygnus OB2. The lost matter is the blue tail you see trailing the glowing red maw of the Doomsday Machine. 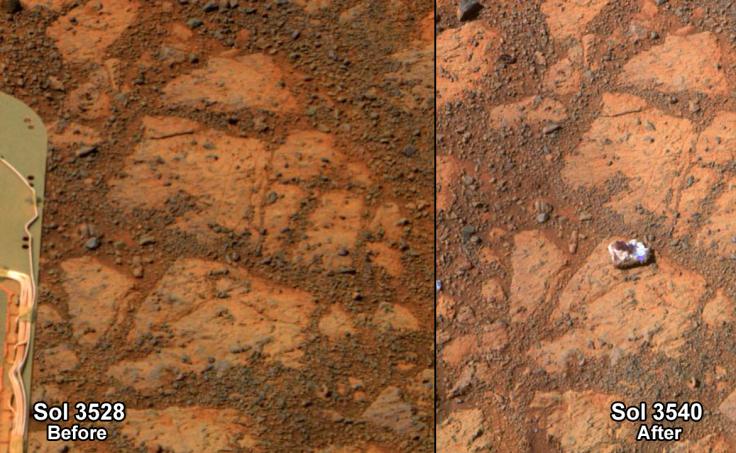 Scientists are used to seeing amazing images sent back to Earth by the Mars rovers. But nobody was prepared to see something as weird as the “jelly donut.”

It all started in December 2013, when the Discovery rover snapped an image of a rocky area near what NASA had dubbed “Pinnacle Island.” About 12 days later, the rover snapped a second image of the same outcropping. This second image made headlines all over the world, since it contained a mysterious object that hadn’t been there before. NASA quickly dubbed this mysterious rock the “jelly donut” for its shape and color (white on the outside, jelly red on the inside), but they had no easy explanation for how it had gotten there. Did the jelly donut just walk into the camera’s view? Or had the donut been thrown there by a nearby meteor impact? Or was it somehow deposited there by the rover itself?

The scientists quickly dispensed with the theory that Martians had moved the rock, although a very important expert warned NASA to explore all possibilities, including the existence of very shy aliens. Most scientists doubted a meteor impact could have thrown the rock into view, though they could not rule out the possibility. After a few anxious weeks, NASA determined that the jelly donut had been moved by Discovery itself. Apparently the rover’s wheel broke off a piece of rock slightly uphill from the image, and as the wheel rotated, it tossed the rock into view. The simple explanation that “they drove over it” dashed many hopes of discovering donut-based life. You can click here to see the principal mission scientist explain how the jelly donut came to be.

Patrick Weidinger can’t wait for the New Horizons spacecraft to reach Pluto in 2015 so Pluto can be returned to its rightful place in our solar system as a full fledged planet.