For millennia, people have buried beasts. The reasons are many: ritual, superstition, and sentimentality. Our complex relationship with animals, particularly in death, reflects lifestyle and spirituality, both past and present.

Often, these interred animals were pets buried alongside their owners. Other times, they were sacrificial offerings. Some burials revealed that these beasts were members of the community—equal with humans. 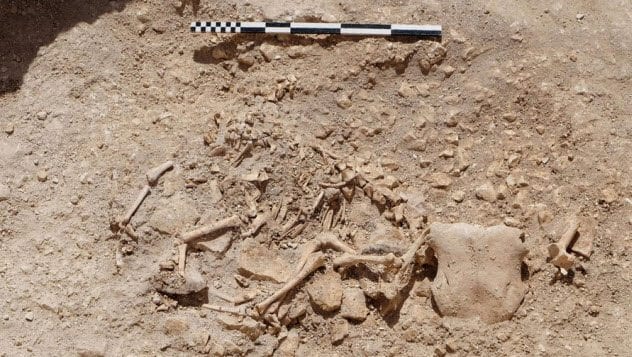 In 2015, British archaeologists discovered an ancient settlement in Dorset filled with bizarre animal hybrids. These Celts arranged beast bones to create chimeras. One cow had its legs removed and replaced with those of a horse. Another bovine had its jaw removed and replaced with an equine one. A dog skull sported three cow jaws. Dated to the late first century AD, the chimeras were discovered in disused storage pits under the entrance to the site’s nearly 200 houses.

The archaeologists also discovered a human sacrificial victim. The young woman’s throat had been slit before she was buried on a bed of animal bones. The cattle, sheep, pig, horse, and dog remains were arranged to mirror the woman. Her head rested on a bed of skulls, and animal legs supported her own leg bones. Researchers believe that the Durotriges tribe occupied the eight-acre site between 100 and 10 BC.

9 To Live And Die Among Humans 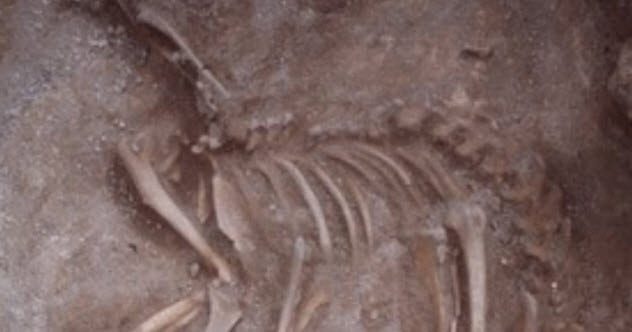 In 2011, archaeologists discovered an ancient dog burial in Siberia that suggested its owners saw the animal as an integral part of their community. Dated to 7,000 years ago, the Husky-like canine was buried as if it were human.

It had sustained work injuries, suggesting that it literally “carried its weight” as it labored alongside humans. The dog was interred with a long antler spoon—identical to those found in nearby human burials. Discovered lying on its right side in a gravel pit, the dog was found at a Shamanka cemetery near Lake Baikal.

Isotope analysis revealed that the dog’s diet was identical to that of its owners: freshwater seal, fish, deer, small mammals, and plants. Vertebrae stress suggests that the dog was used repeatedly to transport heavy loads.

Fractures reveal that the animal sustained several blunt force injuries, which may have been inflicted by red deer hooves during hunts. Others believe that humans caused the injuries, although the dog’s burial and diet suggest otherwise. 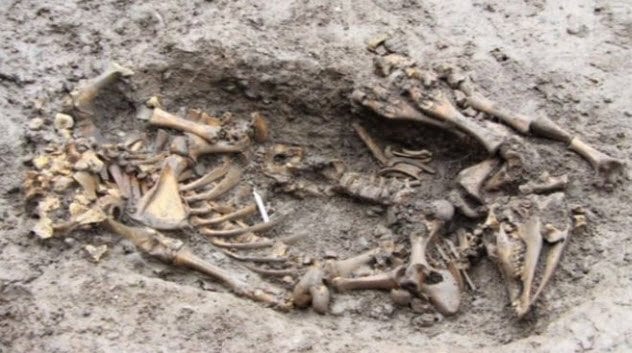 In February 2017, British archaeologists discovered a bizarre animal burial on the grounds of a church in Shropshire. They unearthed two dogs, a calf, a smattering of birds, and a pig—along with the remains of a young woman and a pit of human skulls.

Researchers describe the discovery of one dog, which died giving birth, as “unprecedented.” They discovered the pig within a leather-covered coffin. The animal bones were found alongside human remains.

The bizarre beast burial was found beneath a Greek Orthodox church. However, its foundations go back much further—to the early Medieval or possibly Saxon times. The bones show no indication of butchery. They were likely placed at the site with care.

The bones may be pre-Christian, as animal burial in consecrated ground is forbidden. Some believe that the burials are related to a nearby Bronze Age settlement. Ancient human burial mounds can be found a few hundred meters from the site. 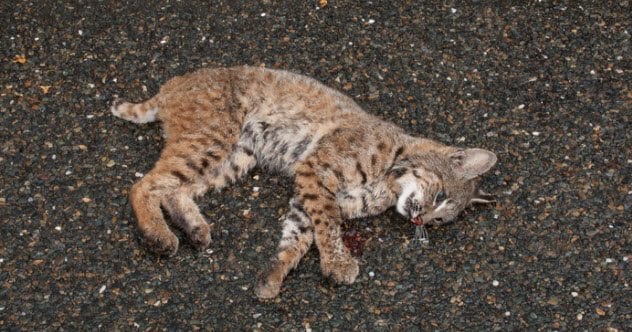 In 2011, a PhD student made a fascinating discovery in a box labeled “puppy burial.” Angela Perri found the remains of a bobcat wearing a necklace of marine shell and bear tooth pendants. Buried at four to seven months old, the critter had been unearthed originally in the 1980s.

In the face of an impending highway project, archaeologists rushed to preserve 14 dirt domes on the Illinois River belonging to the Hopewell culture. The remains of 22 humans were found. These ancient hunter-gatherers buried their canines, so the researchers had assumed that the critter was a dog.

There were no signs of trauma on the cat’s remains, suggesting that it had not been sacrificed. The necklace and delicate placement of the bobcat’s hands suggest purposeful burial.

Perri revealed that the cat’s burial “suggests the animal had a very special place in the lives of these people.” She believes that the bobcat was most likely found in the wild as an orphan. 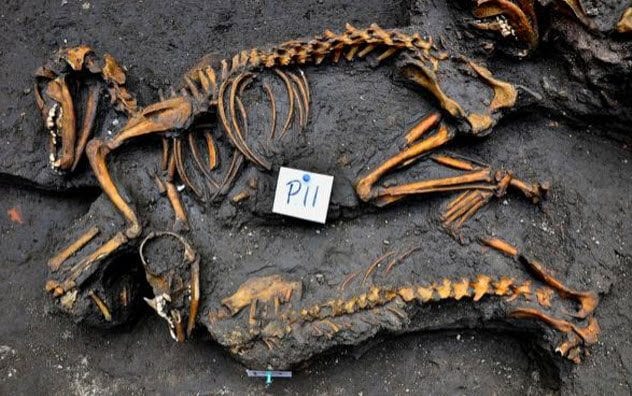 In 2014, Mexican archaeologists discovered the bones of a dozen dogs buried together in the ancient Aztec capital of Tenochtitlan. Dated to 500 years ago, this is the first dog grave in the region not associated with a structure or human remains.

According to Aztec mythology, dogs served as guides for their masters on their journey to Mictlan, the place of the dead. The dogheaded god, Xolotl, also had a strong connection to the underworld.

Dated between AD 1350 and 1520, the dog burial was found in Azcapotzalco, a neighborhood in the northwestern part of Mexico City. Archaeologists unearthed the canine remains about 1.5 meters (5 ft) under street level. The remains were well-preserved and complete.

However, researchers cannot discern any pattern to their interment. They were dated using pottery found nearby. There is evidence that the inhabitants of Azcapotzalco ate dogs. In fact, Aztecs may have raised canines principally as a protein source. 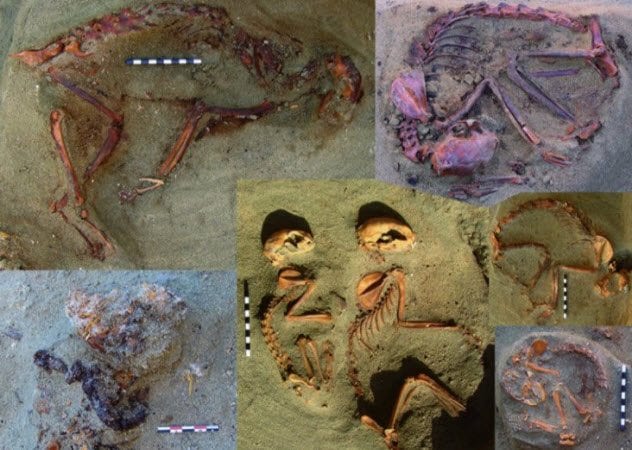 In November 2016, archaeologists announced the discovery of 86 feline graves in an “Early Roman trash dump” in the ancient military port of Berenike on the Red Sea. Dated between the end of the first century AD and the beginning of the second century AD, the Egyptian animal burial appears to be a pet cemetery rather than a sacred site.

Animals interred for religious purposes are almost always found with artifacts. The only objects found within the Berenike beast graves were one ostrich eggshell bead and an iron collar on a vervet monkey.

Researchers speculate that these animals were pets that died of natural causes. Archaeologists have long known that cats were killed and mummified on a near-industrial scale in ancient Egypt.

However, this recent find shed light on what happened when pets passed naturally. Researchers found multiple burials containing two cats. In each case, the double grave contained one adult and one juvenile.

4 The Horse Grave Of Duke Jing Of Qi 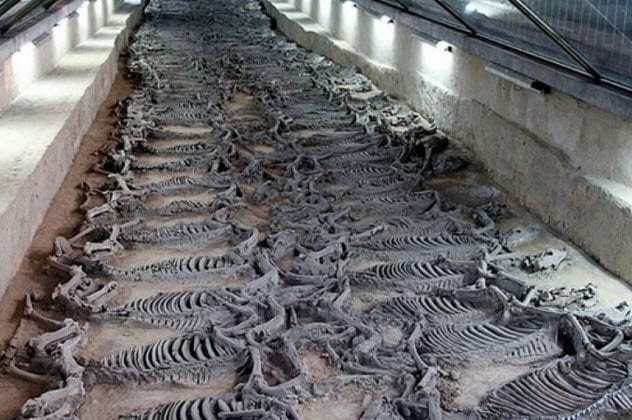 In 1964, archaeologists discovered 251 neatly arranged horse skeletons within the tomb of Duke Jing of Qi. Other sacrificed horse graves have been found in China, but none approach this magnitude.

Researchers believe that the horses were given alcohol and, once unconscious, clubbed on the head. The horses were young, between five and seven years old, when sacrificed. Along with the horses, researchers unearthed 30 dogs, two pigs, and six undisclosed domestic animals.

The tomb of Duke Jing of Qi is in Yatou in Shandong Province. Duke Jing ruled the state of Qi between 547 and 490 BC. He was born to a concubine of Duke Ling of Qi and succeeded his older half-brother, Duke Zhuang, to the throne.

According to records, Duke Jing was obsessed with his horses. Researchers believe that there may be as many as 600 more equine skeletons to be discovered at the burial site of Duke Jing of Qi. 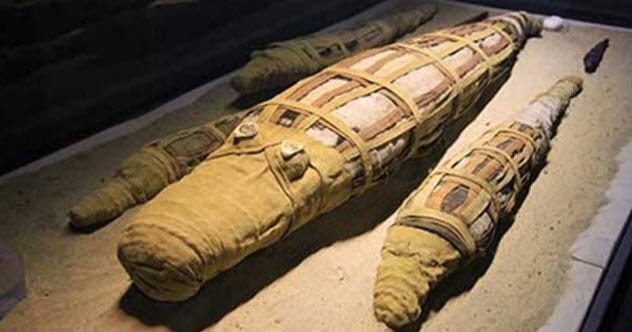 On November 18, 2016, the Dutch National Museum of Antiquities opened an exhibit featuring a virtual autopsy of a 2,500-year-old mummified crocodile. During an initial CT scan in 1996, the nearly 3-meter (10 ft) mummy was revealed to be two smaller crocodiles.

When recently reexamined with a 3-D CT scanner, the mummy turned out to contain the two crocodiles as well as dozens of baby crocodiles. The new imaging also revealed amulets placed within the linen wrappings.

Some Egyptologists speculate that the multiple-croc mummy has connections to the Egyptian religious tradition of rejuvenation and reincarnation. Others speculate that this was an offering to the crocodilian god Sobek.

Requiring a large sacrifice but without any large specimens around, master mummy makers created a giant from multiple specimens, wood, rope, and linen wads. Sobek—god of the army, crocodiles, fertility, and the Nile—had been a popular Egyptian deity since the Old Kingdom era. 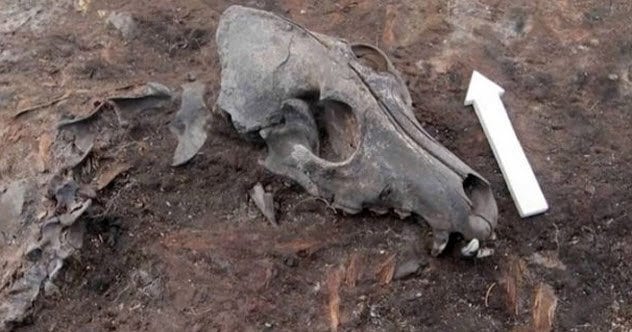 In July 2016, archaeologists discovered a 2,000-year-old grave containing five dogs near the Arctic Circle in Siberia. The delicate burial shed light on the “complex and variable” role of dogs at Ust-Polui. They were pets, workers, food sources, and perhaps even sacrificial offerings.

The most striking thing about the dogs at Ust-Polui is their sheer number. While most Arctic sites have 10 dog burials at most, experts have uncovered 115 at Ust-Polui.

Archaeologists unearthed the remains of sleds and a knife handle with a depiction of a sled dog, suggesting that the dogs of Ust-Polui were employed as beasts of burden. At one site, 15 dog skulls were found piled together. All their braincases had been cracked open.

It is unknown whether the dogs were the victims of sacrifice or human hunger. The sacrifice of dogs in Siberia has been well-documented for appeasing the gods and ensuring community health. 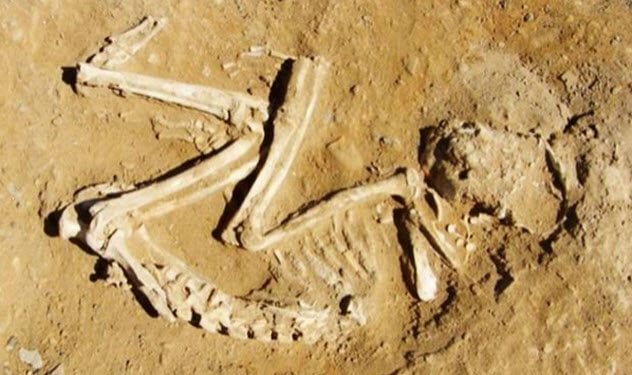 Exotic animals were status symbols in ancient Egypt. In 1979, archaeologists discovered a 5,000-year-old cemetery in Hierakonpolis that revealed the violence of this practice.

One tomb contained baboon skeletons with dozens of broken hand and foot bones and parrying fractures from shielding blows. The archaeologists also found injured cows, antelopes, and a young hippo that broke its leg trying to free itself.

In total, two elephants, a pair of crocodiles, a leopard, and nine other exotics were found near the burial of elite Egyptians. Experts theorize that the animals were sacrificed following the deaths of their owners. The injuries show evidence of healing, which suggests that the animals were kept in captivity for months or longer.

University of Michigan’s Richard Redding suggests that the animals might have been injured during capture rather than through beatings in captivity. Later exotic burials in Hierakonpolis show fewer signs of injury, suggesting that Egyptians became better animal tamers with time.

Dubbed the “Indiana Jones of ethnomusicology” by TimeOut.com, Geordie McElroy has hunted spell songs, incantations, and lost melodies for the Smithsonian, Sony Music Group, and private collectors. A leading authority on occult music, he is also the singer of LA-based band Blackwater Jukebox.