When a crisis happens, most of us first hear about it on the news, but not every crisis is reported equally. While the carnage in Syria and the situation in Ukraine have received wall-to-wall coverage, hundreds of equally horrific disasters can’t even get a look.

The Forgotten Refugees of Eritrea (in Sudan)

Could you point out Eritrea on a map? If not, don’t be ashamed; it’s one of the most underreported countries, despite being home to one of the world’s worst dictatorships. Under President Isaias Afewerki, children are recruited to be used as soldiers, thousands are forced into slave labor, and innocent people are routinely abducted. Unsurprisingly, thousands choose to flee the country. The results aren’t pretty.

Eritrea maintains a “shoot to kill” policy for any citizen leaving its borders. Those who survive often wind up in prison camps in neighboring countries or are simply rounded up and deported back to Eritrea. The ones who do return are generally never seen again.

In October 2013, the UN admitted that the refugee situation was getting “desperately bleak.” With around 300,000 fleeing Eritrea each year, things are reaching a breaking point. Yet Eritrea receives no more than a footnote on most news sites, if that. 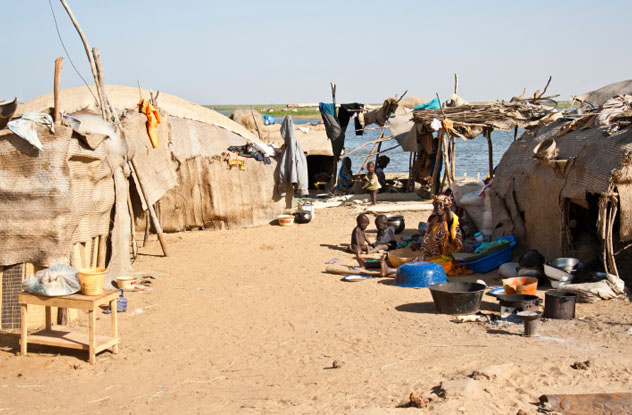 Late in 2013, UN forces quashed a terrorist uprising in northern Mali. Although a large-scale atrocity was averted, all this fighting had an unexpected effect. The communities hit hardest by the recent drought found themselves unable to produce a harvest again the following year. The result is a food crisis that could turn desperate at any moment.

According to World Vision, over three million Malians risk running out of food in the next six months. Right now, 800,000 are already starving, and malnutrition is wreaking havoc with the health of 400,000 children. At the same time, a lack of funding is making it difficult for aid agencies to do much about the unfolding disaster.

Short of a miracle, it’s likely that the next six months will see starvation, misery, and death wash over the Mali landscape. It’s currently expected that 50,000 children will die in agony. 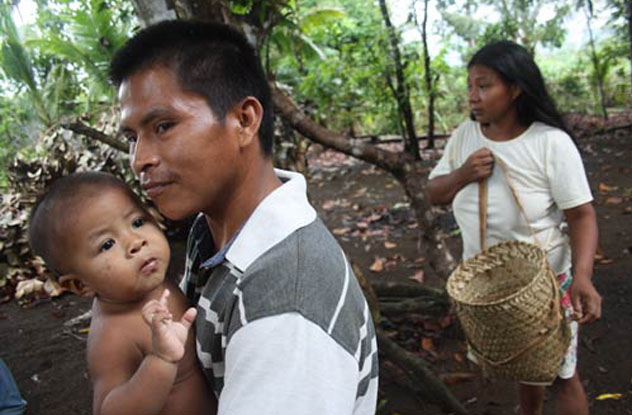 Since 1964, Colombia has been in a state of constant civil war. Leftist terror groups FARC and ELN have turned large tracts of the country into no-go areas. Although the war itself is routinely reported in the world’s press, one aspect is less well known—the fate of Colombia’s 4.9 million internal refugees.

Homeless, penniless, and ignored by their own government, Colombia’s displaced are starring in their own slow-motion disaster movie. Specialist charity IDMC estimates that 94 percent of them are living in poverty. “Extreme poverty” plagues 77 percent of them. This means they have to get by on less than $1.25 a day.

For most of these refugees, life means getting violently assaulted on slum streets, kidnapped and raped, or forced to become a warrior for the FARC. The Colombian government, meanwhile, treats them as a nuisance—one best forgotten.

At the moment, hopes are high that 2014 will be the year FARC finally disarms, bringing the world’s longest-running civil war to an end. 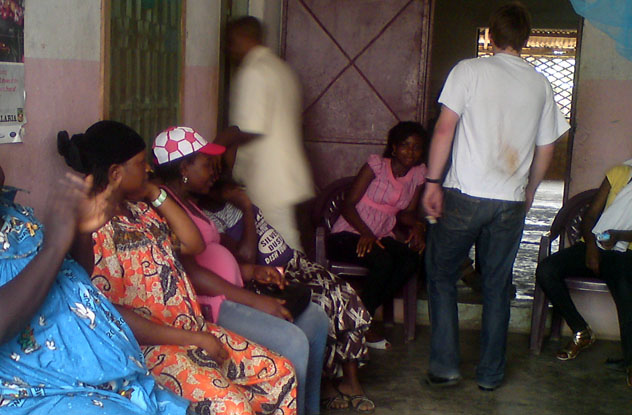 Cameroon is far less known than its infamous neighbor, conflict-ridden Nigeria. But the country suffers from a crisis almost as bad as the current one brewing across its borders. In Cameroon, healthcare is on the brink of collapse.

A total healthcare collapse would be bad enough in even the healthiest society. But in Cameroon, it could be a nationwide death sentence. HIV rates are already off the scale. Over 50,000 children suffer from the disease, and many more have watched their parents waste away to nothing. With no one to provide for them, hundreds of thousands of kids are now going hungry—resulting in a second epidemic of severely underweight children.

If all this weren’t bad enough, malaria is also endemic in the region, contributing to Cameroon’s stratospheric child mortality rate.

When Nobel Peace Prize winner Aung San Suu Kyi was unexpectedly released from her Myanmar prison and then elected in 2012, many declared the country’s human rights disaster at an end. But though the military junta may have vanished as a force for evil, something new has risen to take its place: ethnic cleansing.

Since 2012, Myanmar’s tiny Muslim minority has been targeted for extermination by violent Buddhist militias. As local police and military personnel look on, houses have been burned to the ground, corpses have been mutilated, and children have been murdered. Those displaced by the violence—nearly a quarter of a million people—are routinely herded into camps with inadequate sanitation, leading to yet more deaths. 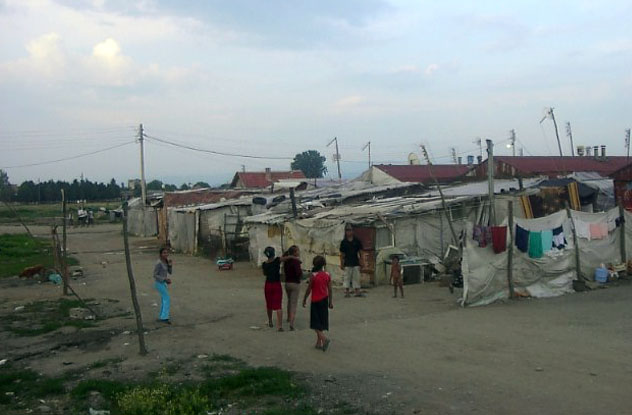 Kosovo was the 20th century’s last great refugee crisis. Hundreds of thousands were displaced by the conflict, and thousands more were killed. But perhaps no one ethnic group suffered as much as Kosovo’s Roma.

Over the course of 16 brutal months, 9 out of 10 Romani saw their homes destroyed and their neighborhoods flattened. The survivors either fled or headed for refugee camps with little sanitation, inadequate housing, and deadly chemicals contaminating the soil. And guess what? Nearly 15 years after the fighting ended, plenty of them are still there.

To call the conditions in these camps abysmal would be an understatement. In Montenegro’s Konik camp, families are herded into shipping containers and left to rot. During 2012’s brutal winter, the entire camp was left without electricity. Those housed in the now-closed Mitrovica camp were exposed to levels of lead so toxic they caused deformities in children.

Although many have since returned to Kosovo society, this has meant returning to discrimination and extreme poverty.

4The Plight Of Liberia’s Children 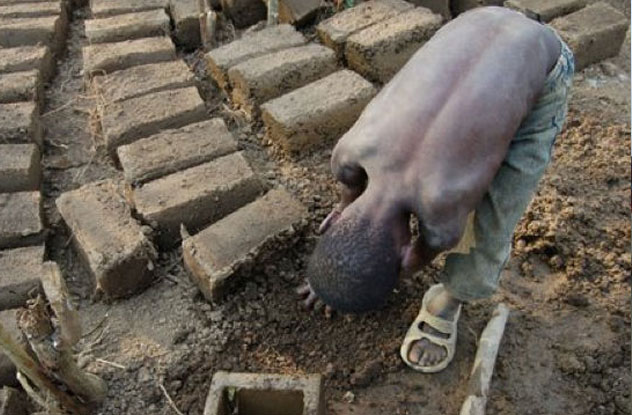 In January 2014, the Liberian government made a shocking announcement: Of all the rape cases reported to police in 2013, over two-thirds involved children between the ages of 3 and 14.

According to UNICEF, over 130 cases of sexual violence against children are reported in Liberia each month. Many of the perpetrators are never brought to justice, even when the outcome is murder. To make matters worse, victims who testify risk being ostracized by their communities, so crimes often go unreported. Those who do speak up find themselves on the wrong end of a justice system that could sum up its attitude toward children’s rights with a simple shrug.

Take a step back, and things get even bleaker. Liberia is one of the world’s hotspots for child trafficking—a euphemism for saying that people there imprison and repeatedly rape kids without a single twinge of conscience. Local orphanages are infamous for prostituting out their inmates, while commercial companies will buy children under the age of 10 to use as slave labor. It’s like the country is a gigantic black hole for empathy and hope, and things show no sign of getting better.

It’s no secret that Mexican workers often head for the American border. But one part of the story frequently gets left out: the extreme horrors these migrants face on their journey.

According to Amnesty International, workers crossing from Mexico are routinely kidnapped, raped, and murdered by local gangs. The authorities respond by doing nothing. By Amnesty’s estimates, this indifference results in tens of thousands of deaths and assaults every year. The charity calls it a new humanitarian crisis.

Thanks to beefed-up security and the presence of militia gangs, reaching the border has practically become a death sentence. Migrants face the remote wastes of the burning Arizona desert—an area known as the Corridor of Death. Since 2001, this stretch of wilderness has killed 2,100 people. But in the last four years, the body count has really taken off, soaring to dizzying new highs. Charities like the Samaritans are calling it a full-blown crisis.

Like Mali above, South Sudan is a region still reeling from a bloody and catastrophic conflict. And, like in Mali, the fighting has had awful, unexpected consequences. With nearly nothing being harvested in the north of the country this year, it’s estimated that over a million children are on the verge of starvation.

According to charity World Vision, malnutrition is endemic in the region. To make matters worse, fighting routinely flares up, leaving yet more children homeless. Lost, hungry, and confused, many of them have resorted to eating leaves and detritus. In January 2014, some states literally ran out of anything for humans to eat.

UNIECF currently estimates that utter disaster can only be averted by launching a $75 million humanitarian operation. Hitting that target doesn’t look likely. It’s predicted that a fog of death will settle across South Sudan by June, signaling the likely deaths of 1.25 million kids. 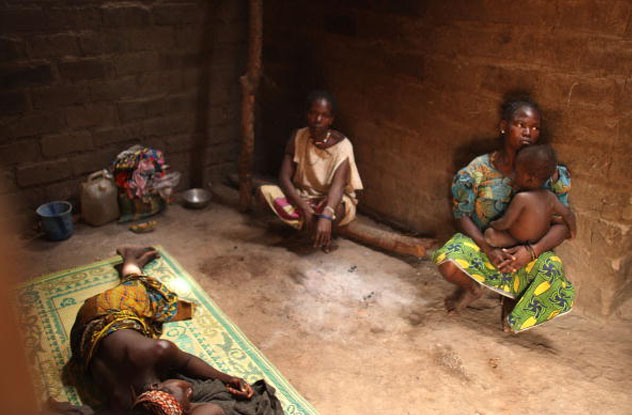 Right now, in the Central African Republic, Christian and Muslim militias are one wrong move away from triggering a genocide. One-fourth of the population is in urgent danger of starving to death. And that’s before we even get to the refugee crisis.

In the past few months, thousands of refugees have swept across the border into neighboring Chad. Few camps have been set up, and many have been left to rot by the roadside. Trees are the only shade available from the blistering African sun. Food is almost non-existent. And with the rainy season coming, a devastating cholera outbreak might be only weeks away.

So what can we do about this and all the other atrocities on this list? Realistically, probably not a lot. But we shouldn’t let these disasters unfold in darkness. When the Haiti earthquake struck in 2010, global coverage led to a record number of people contacting the Red Cross to help. To this day, 9/11 continues to inspire people to give up their time for free. If we could drag those awful disasters out into the light, maybe we can do the same for the people of Central African Republic and the rest of our world’s forgotten victims.