For many little boys and girls, a doll is more than a toy. It can be a friend, a sibling, a confidant. But tales also tell of dolls that take on a life of their own. Literally—they become possessed with departed souls (former owners?) or demonic spirits. Other dolls are just plain weird, with harrowing histories not meant for nurseries and playrooms. 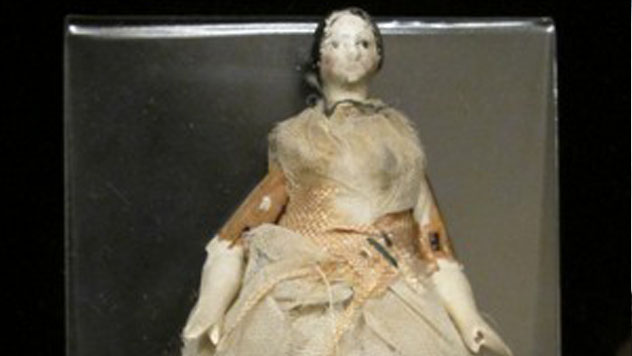 A doll doesn’t need to be cursed or possessed to give someone the creeps. It might just have a strange facial expression or be missing body parts from years of moving around. Or it may have witnessed repeated acts of cannibalism.

Such is the case with Patty Reed’s doll. Patty, eight years old, was traveling to California in 1846 with her family and other pioneers, a group known to history as the Donner Party. As you may well already know, this group of travelers became snowbound and turned to eating bits of leather, mice, old bones—and, finally, each other.

Halfway through their journey, the Reeds asked Patty to get rid of all her toys and other unnecessary items to lighten the wagon’s load. Though she complied, Patty managed to smuggle her beloved doll beneath her voluminous dress. The doll, along with the entire Reed family, miraculously survived their hellacious journey west and was able to enjoy a comfortable life in San Jose. Patty’s doll is now on display at Sutter’s Fort State Historical Park Museum in Sacramento, California.

While this doll isn’t known to be haunted, it has a rather macabre place in history. It’s difficult to look at it and not immediately think of little Patty Reed chewing on human flesh. Patty and her doll’s experience is so compelling that a children’s historical fiction book was written about it in 1956 and has been educating kids ever since. 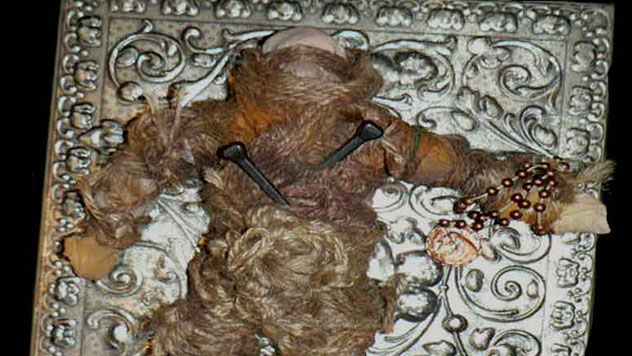 Resembling something you’d pull out of your shower drain, this voodoo zombie doll originated in New Orleans and was sold through eBay to a woman in Galveston, Texas. The eBay listing gave rules to abide by while owning this doll. These included not removing it from its silver casing, a rule the woman broke as soon as the doll arrived. She would come to regret that decision.

The woman claims the doll haunted her dreams and would attack her repeatedly. She relisted it on eBay several times and succeeded in selling it, only to have the new buyer receive an empty box while the doll kept reappearing at her doorstep.

Haunted or not, the doll is made of string and cloth and overall looks like something you’d use to clean your oven, not play with. Most recently, the doll entered the possession of a self-proclaimed ghost hunter who hopes to figure out its mystery. 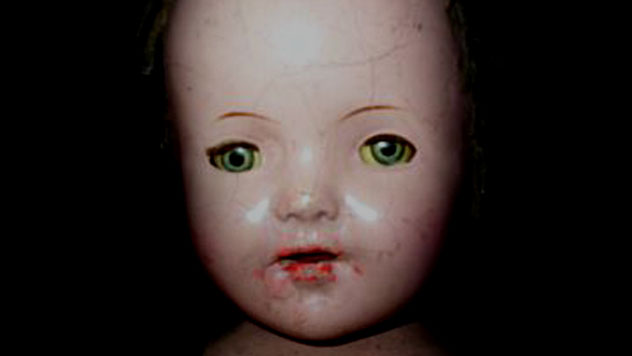 What would you do if part of your family’s legacy was a haunted baby doll? That’s how life is for a woman named Anna, the current “mother” to a little baby doll named Joliet. For four generations, the women in Anna’s family have been cursed to keep up a cruel tradition. Each daughter gives birth to two children, a boy and a girl. In each case, the son mysteriously dies on its third day of life.

Giggles and inhuman screams are heard in the night, coming from the doll. The family claims the cries of different infants can be heard, making the doll appear to be the vessel for all the baby boys lost over the years. 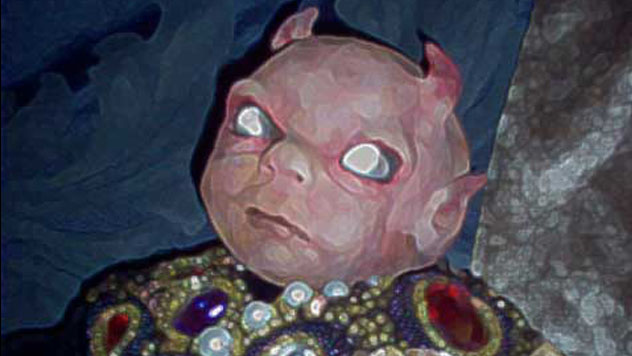 New Orleans has a history rich with folklore and voodoo. Legend has it that during the 1800s, a daughter from an affluent family married a wealthy Scotsman. An angry, jealous ex-lover of hers sought revenge and asked the Queen of Voodoo, Marie Laveau, for help.

Laveau cursed the bride, a curse which came to fruition when the bride went into labor with her first child. The young mother died, but not before bringing a grotesque creature into this world. It is said this baby was the progeny of Satan himself. Laveau brought the baby home and cared for it up until her death. It’s rumored that once the baby died, it was buried alongside her in the Saint Louis Cemetery No. 1.

The citizens of New Orleans feared the Devil Baby. People say it would hide in the shadows and alleys, wrecking havoc wherever it went. To protect themselves, townsfolk would carve fake devil babies out of gourds and hang the dolls outside their homes to frighten off the real one. Some of these dolls are said to still exist today but are rare and highly coveted.

In the early 20th century, new versions of the Devil Baby dolls began appearing around New Orleans. These were said to look exactly like the real Devil Baby, and because of this, these dolls were said to be possessed.

Artist Ricardo Pustiano claims to have been able to buy remnants of the last remaining doll from that era and currently recreates them for purchase. Many customers have claimed these dolls are evil, following you with their glass eyes and moving on their own. They come with “buyer beware” warnings, because it appears the spirit of the Devil Baby is alive and well.


Barbie is arguably the most popular doll in the world. So popular, in fact, that a dead girl requested it purchased for her from beyond the grave.

At the beginning of World War I, the British mistrusted many foreigners in their colonies, and the British army investigated one German couple in Singapore in 1914 as possible spies. The couple was caught, but their young daughter escaped, only to fall off a cliff and die. A shrine was erected in her memory by the locals in Pulau Ubin, with a porcelain altar that supposedly contains a lock of the girl’s hair and her crucifix.

The Barbie doll has only been there since around 2007. A man from Pulau Ubin had the same dream three nights in a row involving a white girl leading him to a toy store and to a Barbie doll within it. After the third night, the man went to that store during the day and found the doll he had seen in his dream. He bought it and placed it at the shrine, replacing an urn that had stood there. Townspeople and tourists now visit the doll, bringing offerings of items like lipstick and perfume, hoping the spirit of the girl will bring them good luck or heal them.

If you can’t make it to Singapore, you can at least buy Mattel’s “Haunted Beauty” doll for collectors. Sadly, the doll is only dressed in a ghostly manner, and it shows few or no supernatural tendencies. 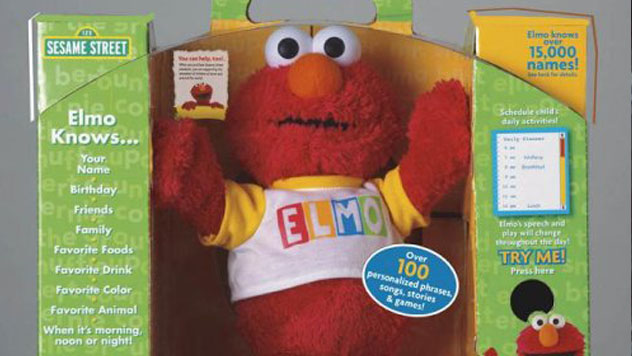 Since 1996, Elmo dolls have topped the holiday toy lists of children worldwide. There’s nothing to be remotely afraid of when it comes to this childlike monster . . . until he threatens to murder you.

Such was the case for the Bowman family. Back in 2008, two-year-old James Bowman had an Elmo Knows Your Name doll. The doll was programed to recite its owner’s name, along with various other personalized phrases. This particular doll not only knew James’s name but liked to include the word “kill” before it. Elmo would sing “Kill James!” repeatedly, until James’s distraught mother Melissa decided to put it out of the toddler’s sight.

The doll only began spewing death threats after its batteries had been changed. Fisher-Price, the manufacturer, offered the Bowmans a voucher for a replacement. It is unknown whether or not the family took the company up on their offer. 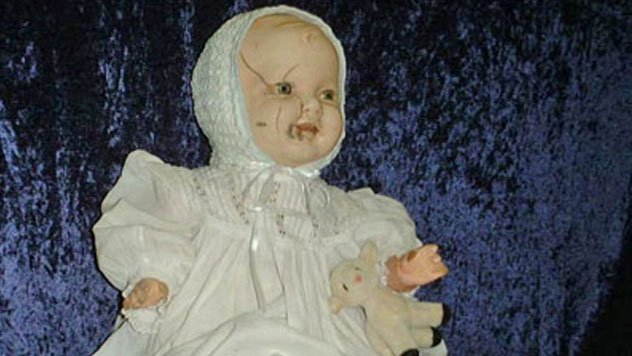 Mandy is a porcelain baby doll made in England or Germany between 1910 and 1920 and donated to the Quesnel Museum in British Columbia in 1991. Mandy’s donor had said she would hear crying in the middle of the night coming from the basement, and it wasn’t until after she gave Mandy away that the crying ceased.

Though the crying stopped for the donor, strange occurrences continued as Mandy took up her new residency at the museum. Employees say lunches go missing, only to turn up elsewhere in the building. Footsteps are heard when no one is around, and office supplies like pencils and books always appear to be in a different spot from where they were last placed.

It took the museum some time to decide where to place Mandy. They say she couldn’t be encased with other dolls because she had a tendency to harm them. Visitors to the museum say her eyes will blink or follow you wherever you walk. She also likes to mess with camera equipment whenever anyone tries to photograph or film her. 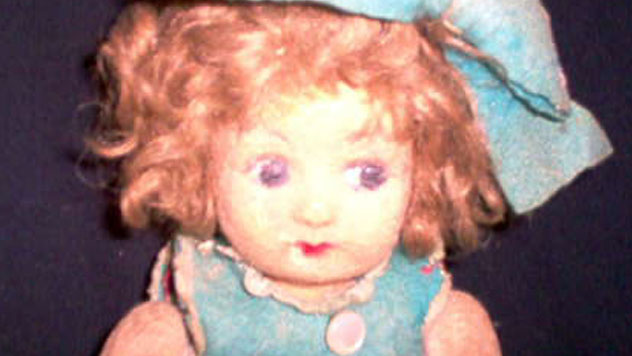 Pupa (Latin for “doll”) was made in the 1920s to resemble its Italian owner. That trend continues to this day with dolls such as the American Girl “Just Like You” line, but in those days, such dolls generally used their owners’ own hair.

Pupa’s owner claimed the doll spoke to her. After the owner died in 2005, the family put Pupa in a glass case, and reports say the doll now periodically changes position. Her facial expression changes as well, and she’ll tap on the glass as though she wants to get out. She’s also said to move items around in her display case. 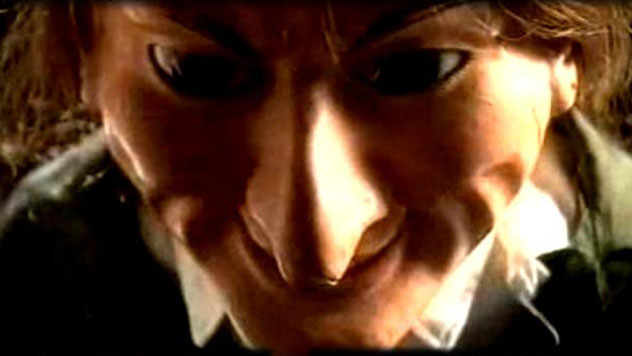 a
Photo credit: The Paranormal Guide

In 1972, Kerry Walton returned to his Australian hometown for his grandmother’s funeral. During this time, he decided to face a childhood fear by visiting an abandoned building that had scared him for years. When he went to this house, he discovered an old marionette underneath its porch. Kerry felt compelled to take it home with him, and they’ve been together ever since.

According to psychics, the doll was made 200 years ago by a Romanian gypsy for his son who had drowned. The gypsies believed in spirit transference, and dolls would act as a new home for the dead. The doll has real human hair, and underneath the scalp is a likeness of a human brain. He was given the name Letta, or Ledda, due to his European gypsy heritage, or because the doll occasionally screams, “Letta me out!”

Nothing evil has been reported surrounding this doll in recent years. In fact, after finding the doll, Walton’s luck changed for the better, and his collectibles business began to boom. Still, some quirks allegedly surround Letta. It will rain whenever he’s taken outside, and hanging pictures may fall off the wall when he enters a room. Dogs bark and attempt to attack whenever they’re near Letta, and people have said they feel inexplicably afraid and sad when they see him. Letta is also supposedly capable of moving on his own, changing positions while seated, and emitting a pulse while held. 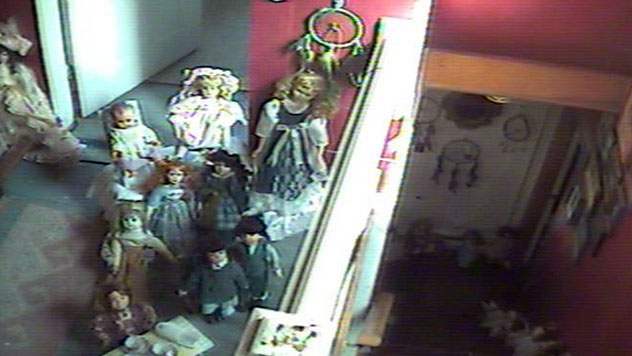 No, these aren’t the names of multiple spirits inhabiting one doll. Instead, these are the names of the different possessed dolls that live with a family of five in rural Pennsylvania. The owners of these dolls purchased each one knowing that they were haunted. As investigators of the paranormal, the owners wanted to examine the dolls while also giving them a loving home. And for our viewing pleasure, a camera has been set up to record the dolls all day and night long. Some people enjoy watching puppies and kittens, others like watching a live feed of porcelain dolls. To each their own.

Occasionally, the camera does pick up some strange happenings around the dolls. In 2009, the camera caught an apparition of what is presumed to be a little boy appearing at the bottom of the steps.

Dana is a comedy writer and performer with a penchant for all things spooky. When she was five she wanted to be a grave digger, but instead chose a more “lucrative” career. For a moderately good time, click here.

10 Creepy Stories Of Encounters With Men In Black