Although we’ve come to know so much about animals and their habits, everything we’ve learned so far has just been the tip of the iceberg. Some of these new discoveries about them tend to be downright disturbing. Then again, it’s all part of nature.

10Centipede Bursts Out Of A Snake

In 2013, a group of biologists working in Golem Grad (also known as Snake Island) in Macedonia discovered the very bizarre scene of a dead centipede with its head protruding out of an equally deceased nose-horned viper. A closer look showed that the centipede had tried to eat and claw its way out of the snake, like the chest-burster from Alien, before finally succumbing to the venom.

Although the viper was longer than the centipede by almost 5 centimeters (2 in), the centipede weighed more, the snake had clearly underestimated its prey.

This incident was reminiscent of a similar case in 2006, when researchers in the Everglades discovered a headless 4-meter (13 ft) Burmese python with a 2-meter (6 ft) alligator sticking out of its stomach. The researchers theorized that a second gator had snapped off the snake’s head, trying to help its unfortunate comrade. The force of the melee may have ripped the snake’s meal out of its stomach.

Lion with canine distemper has seizure

Sickness is part of the great circle of life, striking even the grand lion. The above video shows a lion suffering an especially violent seizure due to canine distemper. The disease hit Serengeti National Park as an epidemic in 1994 and the Ngorongoro Conservation Area in 2001. Those two outbreaks killed an estimated one-third of the lion population in each park.

According to experts, thousands of domesticated dogs scavenging on carcasses helped spread the virus among predators. Also to blame was an extreme drought followed by sudden heavy rains. This unusual weather combo allowed ticks carrying the Babesia parasite to proliferate among buffalos, with disastrous consequences for the lions that ate them.

The above video shows a cow, your classic passive grass-eater, killing and eating a chick. It’s no isolated incident. In India, a poultry owner discovered that his own cow was responsible for eating almost 50 of his chickens.

When cows can’t get certain minerals like calcium and phosphorus from vegetation, they turn to birds. This strange discovery has not been limited to cattle either; deer also eat birds to get the nutrients necessary to grow their antlers. Cases document sheep devouring birds as well (with another unsettling video to prove it).

And ruminants aren’t the only ones with a surprising interest in birds . . .

7Pelicans Eat Them, Too

It would seem that pelicans have a penchant for their fellow avians as demonstrated by this 2006 video taken at St. James Park in London. One of the park’s five Eastern White pelicans casually strolled up to a pigeon and swallowed the poor bird whole.

Royal Parks spokesperson Louise Wood explained this by saying pelicans in close proximity to humans are predisposed to a wider range of diet. Yet pelicans in the wild prove just as likely to consume anything when their natural food supply decreases. As evidence of this adaptive behavior, this footage taken on the South African island of Malgas shows Great White Pelicans—in response to the lack of their usual prey—wreaking havoc on a colony of Cape gannets, snatching and swallowing their fledglings.

Tori the Smoking Orangutan to be Sent to Rehab

Tori, an orangutan living in an Indonesian zoo, started smoking more than a decade ago when unscrupulous visitors threw cigarette butts into her cage. Over time, her addiction to smoking grew so strong that she often signaled for cigarettes and threw tantrums when she missed her daily fix.

Tori’s smoking habit continued all the way to her pregnancy, forcing zoo handlers to finally transfer the primate and her non-smoking partner Didik to a closely-guarded island in the zoo. Aside from the security, mesh netting prevented cigarette butts from reaching the orangutans. The handlers also stocked their tree-filled pen with swinging ropes, hoping these would distract Tori from her habit.

Amazingly, the cold turkey method worked. During her isolation, Tori gave birth to a healthy baby and has since focused all her efforts on being a full-time mother. She hasn’t demanded a cigarette since.

In a manner similar to the violent tendencies of sexually frustrated dolphins, male sea otters often find an unwilling partner if they fail to land a female. In the case of otters living off the coast of California, this search extends to baby seals.

The male otter pounces on an unsuspecting baby seal and rolls it violently in the water. With its victim exhausted or dead from the struggle, the otter then proceeds to copulate with its body. As if that weren’t disturbing enough, some male otters keep mating with the corpses for a week.

The above video contains a report but no shots of the actual act. We haven’t found footage of this particular phenomenon, and frankly, we’re okay with that.

4Seal Tries To Mate With Penguin 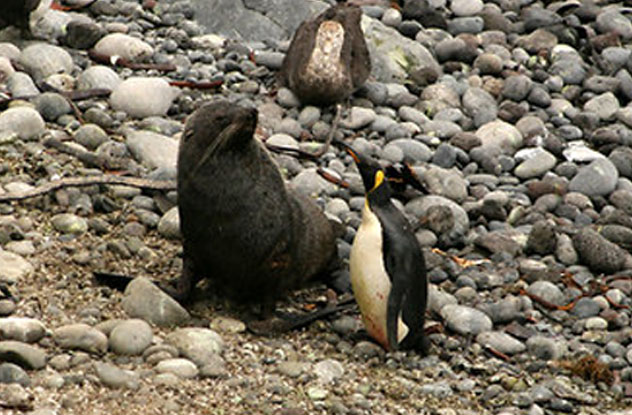 In one of the most bizarre known cases of animal sexual coercion ever, researchers in 2008 saw a young fur seal trying to mate with a king penguin on Marion Island near the Antarctic. The seal, estimated to weigh 100 kilograms (220 lb) mounted the 15-kilogram (35 lb) bird and tried to penetrate it for almost an hour. It finally gave up, let the penguin go, and headed back to the water.

The incident marked the first recorded instance of a (non-human) mammal trying to mate with a vertebrate from another animal class. The seal may have lacked access to females of its own species. Researchers also offered the more bizarre explanation that the seal’s original intent to kill and eat the penguin took on a sexual nature.

Elephants are one of the few animals in the world that can take on a rhino. In fact, in the past two decades, young male elephants in several African reserves have deliberately killed dozens of rhinos. Although park rangers first suspected poachers, it soon became clear that elephants were responsible.

Cullings and relocations to curb the elephant population had left many young males without an older role model. With no one to guide them, these traumatized orphans soon formed roving bands of testosterone-addled teen troublemakers that intentionally picked fights with rhinos.

After some failed initial attempts to stop this behavior, park officials instituted “one of the largest Big Brother programs in the world,” placing older male bull elephants among the young males to discipline them. Incidents of rhino deaths and other destructive behavior stopped after that.

Seeing these gentle giants calmly eating bamboo shoots and being generally adorable, we forget that pandas are omnivorous by nature—as evidenced by this video showing one in the wild feasting on the carcass of what appears to be a goat.

Most scientists say pandas do belong to the bear family, and the beasts definitely have the digestive systems of carnivores. Their stomachs just boast the added bonus of unique microbes to process bamboo.

Here’s another video showing a panda actively chasing and killing a peacock that trespassed inside its cage. Po from Kung-Fu Panda would have probably eaten his master (and his teammates as well).

Chimpanzees practice the eyebrow-raising habits of infanticide and cannibalism. As if those weren’t enough to make us squirm, a landmark study has proven that chimps also engage in a pastime familiar to us humans—waging war.

Scientists on a decade-long study on chimpanzees in Uganda’s Kibale National Park saw one unusually large troop in Ngogo regularly conduct raids in enemy territory. And as we can see from the video, the Ngogo chimps displayed discipline and tactics reminiscent of human soldiers.

To the scientists, it was clear that these chimps attacked their neighbors to gain more territory and female partners. The larger scientific community, however, disagrees as to the driving factor behind the chimps’ aggressiveness. Some argue that a diminishing habitat brought on the chimps’ warlike behavior. Others hold that warfare is inherent to their nature (and, by extension, to ours as well).

+Bird Eaten By A Pitcher Plant

Somerset native Nigel Hewitt-Cooper, a garden owner who grows carnivorous plants, chanced upon this grisly scene in August 2011. One of his monkey cup pitcher plants had caught and digested a great tit. The bird had been unable to extricate itself from the plant’s mouth after feeding on the insects trapped inside.

Although pitcher plants have been known to eat small reptiles and mammals (here’s one eating a rat), this was only the second recorded incident of a plant successfully catching and eating a bird. The first had happened in Germany a few years prior.

10 Most Oddball Communication Methods In Nature