Sasquatches and sea monsters tend to get most of the love in the cryptid community, though most people don’t realize that they’re often only a stone’s throw away from a more canine-haunted creature. If these stories are to be believed at all. From the Black Dog of England to the Inugami Yokai of Japan, the world is filled with alleged legends that tend to bark and bite more than others. This list will cover ten of these cryptids that may make the mythical werewolf seem a bit less… well, mythical. 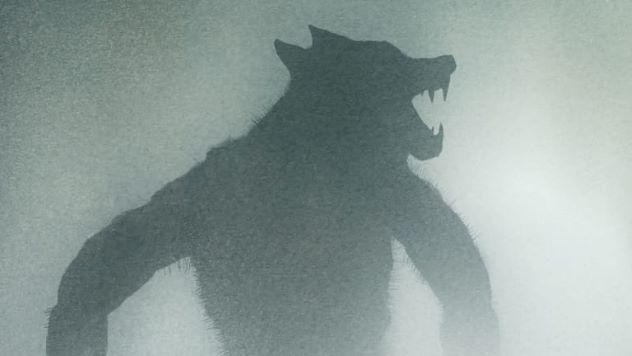 The first entry on this list may seem like your basic werewolf by appearance, but its mannerisms are certainly far different from its bloodthirsty kin. Legend says that if one happens to cross paths with this bipedal canine in the middle of the night, it’ll force you to carry it on your back to its destination.

“The Böxenwolf” is a name given to alleged werewolves found in the area near Hanover in Germany, mostly throughout the 18th century. Unlike modern werewolf legends, however, a simple bite and full moon aren’t enough to usher a transformation. Like most European werewolves at the time, the would-be wolf must make a covenant with the devil himself in order to receive a strap, or belt, that brings forth a transformation. Then, the wearer would have very little difficulty convincing peasants to hitch a ride, no matter how awkward the mode of transportation was.[1]

France is where this next cryptid can be found, and unlike most of the cryptids on this list, La Bête du Gévaudan, or The Beast of Gevaudan in English, was only spotted over the course of three or four years before disappearing forever. Also, unlike other canines on this list, La Bête racked up a body count, a body count that approached one hundred.

This canine, described as a wolf the size of a small bull with red fur and a panther’s tail, was first spotted in 1764 when it attacked a young shepherdess by the name of Jeanne Voulet. La Bête would continue to terrorize pre-Revolutionary France until it caught the attention of King Louis XV himself, who would routinely organize hunts to find the creature. It’s even speculated that these costly hunts were a catalyst to the French Revolution, though they would be one example of many of the French aristocracy’s overspending.[2]

“Yokai” is the term used to describe a large number of legendary entities that hail from Japan, and a large number of Yokai possess animal forms. While the foxlike Kitsune is possibly the most well-known Yokai to have a canine appearance, Inugami is a spirit with the appearance of a straight-up dog. However, Inugami’s true, hidden form remains a bit darker than a simple spiritual-looking dog. This canine’s head is actually a preserved, mummified dog’s head bound in ceremonial wrappings!

The legend goes that Inugami is a spiritual servant summoned by sorcerers of Japan to follow every order bequeathed unto them, be the orders benign or malevolent. This Yokai can also possess poor travelers afflicted by heightened emotion and is said to enter its victim’s body through the ears. Inugami can even bestow an unstoppable hunger unto whoever they possess, almost giving them dog-like traits in the process, much like the bite of a werewolf. [3] 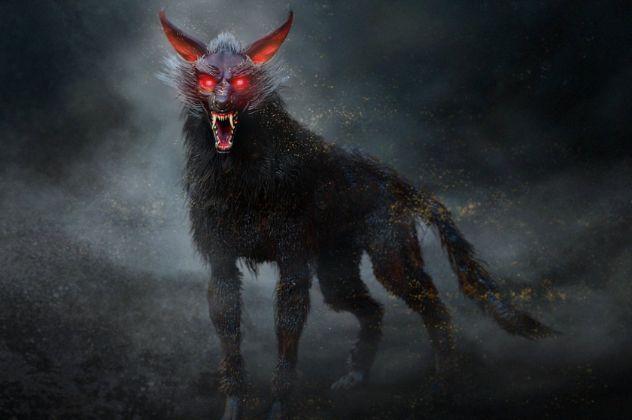 The Canary Islands, located off the northwest coast of Africa, are home to a particularly demonic dog known as the Tibicena. According to legend, these black-furred, red-eyed dogs were actually demons of the Guanche mythology by nature and are even thought to be children of the less-than-benevolent deity Guayota.

The Tibicena, however, does have a few variations on their reportings; sometimes, they are described with white fur, and sometimes, they aren’t even dogs at all, taking on the shapes of a boar or even a sasquatch. One thing is certain, however, be sure to avoid the caves that they call their home. No matter their shape or origin, the Tibicena is a hunter of human flesh and is even said to have been witnessed well into the 1900s.[4]

6 The Beast of Bray Road

Beast of Bray Road | Monsters and Mysteries in America

The U.S. is no stranger to werewolf stories, though some claim that the upright canids of North America are more of a modern phenomena than werewolves of old. Toward the end of the 1980s, near the city of Elkhorn, Wisconsin, one particular road, whose name at this point is, unsurprisingly, Bray Road, fell victim to a particular rash of werewolf sightings.

Described as usually six feet (1.8 meters) tall, the beast is pretty much what one might imagine when they first think of “werewolf”: clawed, with a wolflike head, and covered in fur. One of the first witnesses, Doris Gipson, was driving a friend home from a Halloween party when the beast came out from a cornfield to pursue her, even leaving scratch marks in Gipson’s videos. Sightings of this canine cryptid continue even to this day, and Wisconsin native Linda Godfrey keeps a good record of the many, many dozens of sightings in the Elkhorn area.[5]

The Beast of Bray Road actually has a cousin right across Lake Michigan. And some even claim a connection between the two as the Michigan Dogman first received a rash of sightings in the Lower Peninsula of Michigan right about the same time that the Beast of Bray Road haunted Wisconsin. There is a twist, though; Radio DJ Steve Cook wrote a song about the supposed upright canine and played it on his radio station as an April Fool’s Day Prank in 1987. When fans started calling in, claiming to have seen the creature, it started to feel less like a prank.

Much like the Beast, however, the Michigan Dogman looks like your standard werewolf without too much variation, though it attacks far fewer cars and people than its other lycanthropic brethren. Sightings do continue to this day, however, and it is even claimed that the Dogman was spotted as far back as 1937 when a man in Paris, Michigan, saw it roam among a pack of otherwise normal dogs.[6]

The next entry on this list is an actually verifiably real entity. In 2003, three people were tragically murdered, and sixteen people were injured in the Dowa district of the country of Malawi. When investigated, authorities believed this to be the work of a rabid hyena, though said hyena was never actually caught. What the people of the area believed, however, was that it was a far larger, more dangerous canine.

Another odd detail about this supposed hyena is the fact that it didn’t completely eat people, which is very odd for a predator. The Malawi Terror Beast would have two separate rashes of appearances that year but would never be officially caught, even though Malawi’s official park rangers scoured the landscape for it.[7]

The Legend of the Rougarou

Also known as the “Loup-Garou” in France and early North American French Territories or the “Lougarou” in Haiti. Even known by its Cajun name, “Rougarou,” this legendary walking canine shares a lot of similarities with the well-known werewolf myth, with one exception. The rougarou has the ability to change into its lycanthropic form at will!

The rougarou is pretty much described as the de-facto werewolf, a two-legged, furred wolf with sharp teeth and claws. It’s hard to pinpoint whether the legend of the French Canadian loup-garou or the Cajun rougarou came first, but both supposed werewolves began their prospective legends in the 17th century. In the case of the rougarou, this canine would prowl the Bayou, punishing bad Catholics who failed to practice Lent. [8]

The Creepy Truth About Chupacabras

It’s very hard to have a name that directly translates into “Goat sucker” and still possess an air of malice. Such a feat, however, is accomplished by one of the most famous cryptids of all time, the Chupacabra. Haunting locales from Chile to Texas to Mexico to Puerto Rico, this strange, small hissing creature is by far the most well-known cryptid of Latin America. Some even claim to have witnessed it as far north as Canada.

While the most common rational explanations for the Chupacabra are that it is definitely a dog with mange, the actual legend itself does claim that this being is more reptilian than canine. Aside from a few quills on its back, though, some claim that this legendary beast resembles the hairless Xola dog. The main occupation of Chupacabra is far more bloodthirsty than a real dog’s, however, and it is said to be the culprit of many livestock mutilations, with a career spanning the 1970s all the way to the modern day.[9]

Perhaps the most enigmatic of the creepy canines in the world is the ominous Black Dog, found all over the place in England. Even though Sir Arthur Conan Doyle’s The Hound of Baskervilles or even the band Led Zeppelin may be most people’s entry point into this particular legend, it goes far deeper than merely a single sighting in a single remote town.

Also sometimes known as The Barghest or Black Shuck, the Black Dog begins his legend in 1677 in southern Devon when a squire supposedly sold his soul to the devil and now rides a pack of black dogs as his steed. But the legend of this mastiff-esque, red-eyed, massive dog has variations all over England and sometimes in Wales and Scotland. They are said to be malicious or foretell bad luck and are often found near allegedly haunted areas or places where particularly dramatic deaths have occurred.[10]