Few things beat a great movie ending. These final moments cement the film in your memory and ensure you will be telling future friends and family about this cinematic adventure. However, perfect as they seem, the endings of your favorite movies are often just tacked on at the last minute. Here are 10 ways your favorite films might have had drastically different endings.

10 Return Of The Jedi 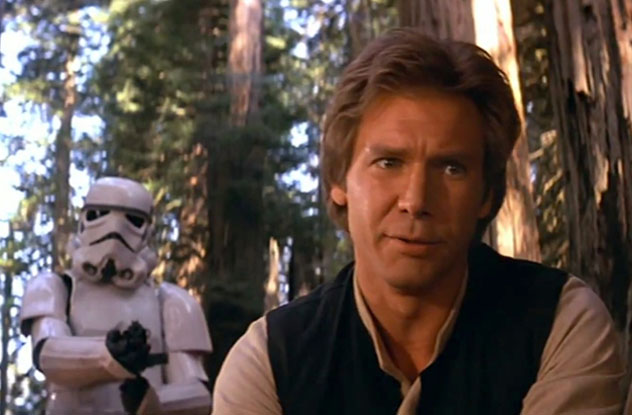 In the final film of the original Star Wars trilogy, audiences got to see the culmination of many struggles: Rebel vs. Empire, Jedi vs. Sith, and teddy bears vs. Stormtroopers. Everyone is familiar with the happy ending—good triumphs over evil, and everyone’s favorite characters gather for an emotional “kumbaya” scene with the Ewoks.

Originally, though, things weren’t meant to be so smooth for the good guys. Harrison Ford campaigned heavily to have his character, Han Solo, killed, believing that it would not only add gravitas to the movie but finality to his own character’s story. According to Ford, Lucas shot the idea down because of the negative effect it would have on toy sales. While today’s Star Wars franchise would have been different without a surviving Han Solo, it would certainly have given weight to the movie’s original title: Revenge of the Jedi.

Buy the collectible Blu-Ray edition of Scott Pilgrim vs. The World at Amazon.com!

9 Scott Pilgrim vs The World 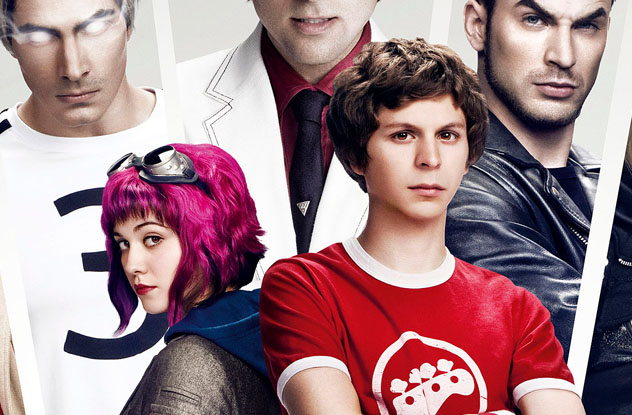 Edgar Wright’s adaptation of the beloved Bryan Lee O’Mallery graphic novels of the same name preserved most of the original tales’ off-the-wall humor. The movie is known for its quirky juxtaposition of reality and fantasy—realistic elements (such as an early twenties man searching for both direction in life and a girlfriend) mix seamlessly with video game references, overblown fight sequences, and ex-boyfriends exploding into coins. This movie has a predictably happy ending: Scott Pilgrim (Michael Cera) defeats the “evil exes” and is finally able to attempt a normal romance with Ramona Flowers (Mary Winstead).

However, one dark original ending conceived of by Wright involved reality triumphing over fantasy. Specifically, Scott Pilgrim wakes up and realizes that the events of the movie were actually a dream. Unfortunately, it was a waking dream for the unhinged Scott: a newspaper declares that the serial killer Scott Pilgrim has been apprehended after violently murdering seven people over the course of the year, spreading coins around their bodies to feed his mania that he was living a video game. Thankfully for fans of the original comics and happy endings, Wright said “Game Over” to this dark idea. 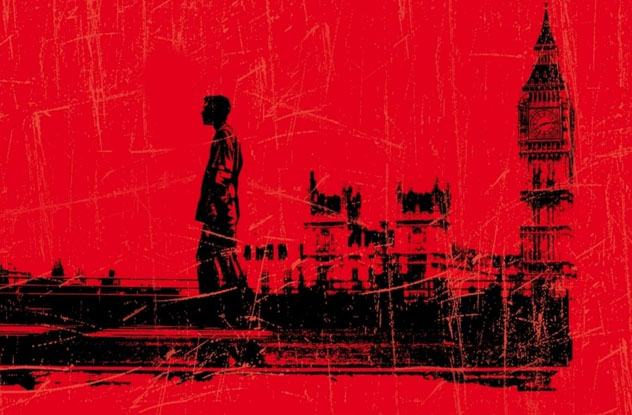 In many ways, this 2002 film helped breathe new life into the dying zombie genre. In place of the classic “slow” zombies of Romero’s Night of the Living Dead films, these monsters were frighteningly fast, infected by a so-called “rage virus.” The film follows a small group of survivors who are ultimately saved by another practical consideration Romero never addressed: After all of the humans are either eaten or safely hidden, the zombies simply die of starvation.

28 Days Later is unique to this list because of the number of alternate endings. While most are variations of protagonist Jim dying and the rest of the narrative being mostly the same, the filmmakers had one dramatically different ending: In one, Jim manages to save infected father Frank’s life, nobly giving his own so that Frank and his daughter could have a future. While emotionally moving, filmmakers ditched this ending because the idea of completely swapping blood with a zombified Frank without the clean blood getting infected was preposterous, even by flesh-eating zombie movie standards. 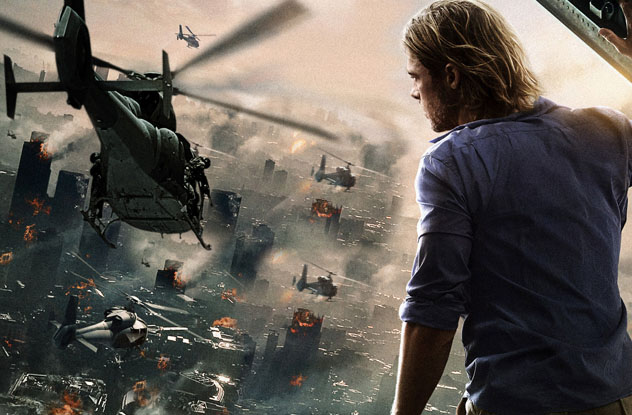 While this Brad Pitt zombie flick served as a passable action thriller, it didn’t exactly advance the genre. In fact, fans of the Max Brooks novel and zombie fans in general were puzzled by the ending—Pitt, with the help of future Doctor Who star Peter Capaldi, discovers a kind of cure to the zombie virus. This not only swerves dramatically from the book but acts as an oddly cheerful ending for an otherwise bleak movie.

Originally, though, the ending was as bleak as the rest of the film. Instead of the dramatic plane crash of the finished film, Brad Pitt’s Gerry lands safely in Moscow, where he is forcibly recruited into helping fight zombies. He sees that the cold of winter slows the monsters down (a more explicit nod to the book) and tries to call his wife to tell her, but in the time he’s been in Russia she’s had to sell her body to a soldier for safety.

That soldier tells Gerry he should give up and start over like they have, but Gerry and company end up traveling thousands of miles to the nearest unfrozen port, landing on the American shore hell-bent on vengeance. Paramount found all of this to be a bit dark for a summer flick and found new writers to give us the eventual happy ending. 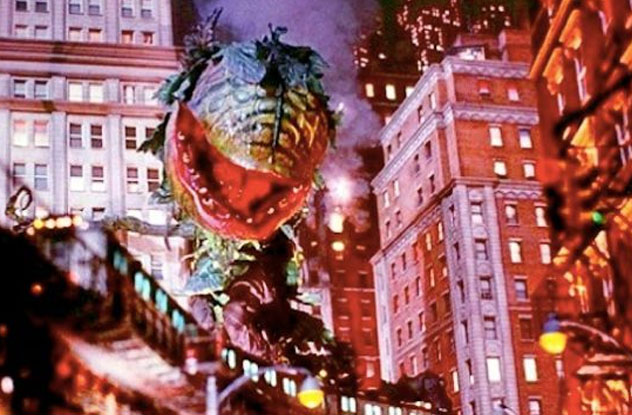 This classic 1986 musical film was no stranger to adaptation: It was based on the 1982 off-Broadway production that itself adapted a 1960 Roger Corman film. Someone familiar either the original film or the Broadway adaptation, though, would likely be puzzled at the happy ending of the movie: Seymour (Rick Moranis) thwarts his man-eating plant Audrey II and marries his fiancee, complete with a new life in suburbia.

The original ending of the film, however, had no happy ending for anyone but Audrey II. Seymour’s fiancee Audrey dies after the plant attacks her—and then Seymour completes her last request, which is to be fed to the plant to foster Seymour’s success. Seymour is soon offered the chance to make a profit by helping to reproduce and sell more Audrey II’s. He tries (and fails) to kill the plant and is eaten. Audrey II plants then take over America (including some giant ones that could give Godzilla a run for his money). The plants defeat the Army, and kill everyone.

After cold audience reactions to this ending, the studio demanded the happy alternative. However, decades after the original release, Warner Bros restored the original ending and released it to home viewers as the film’s director’s cut. 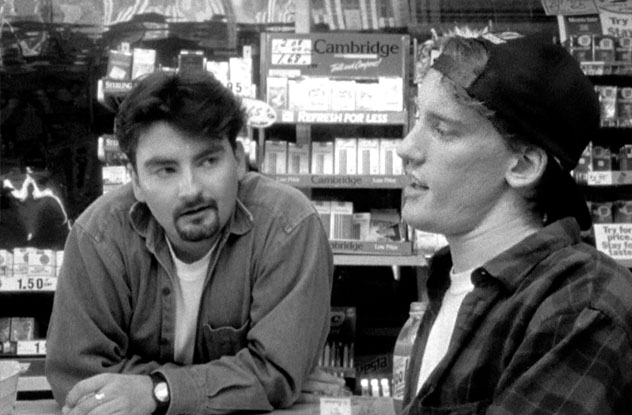 Kevin Smith’s black-and-white slice-of-life comedy helped change the face of cinematic comedy. As a venture funded by Smith selling his comics and maxing out his credit cards, it changed the notion of how movies had to be financed, and its subject matter—two clerks trying to figure out their future while dwelling on the past—gave voice to the concerns of Generation X.

The ending speaks to the hopes of that generation, with protagonist Dante vowing to reconcile with his girlfriend and give his life more direction. The original ending, though, is quite the opposite: One final customer enters the store to rob the cash register, shoots Dante, and leaves him to die.

This bleakly realistic ending would have likely closed the door on future films in that same world, so it is fortunate for fans of Mallrats, Chasing Amy, and the Clerks sequels that Dante’s death “wasn’t even supposed to be here today” in the final cut. 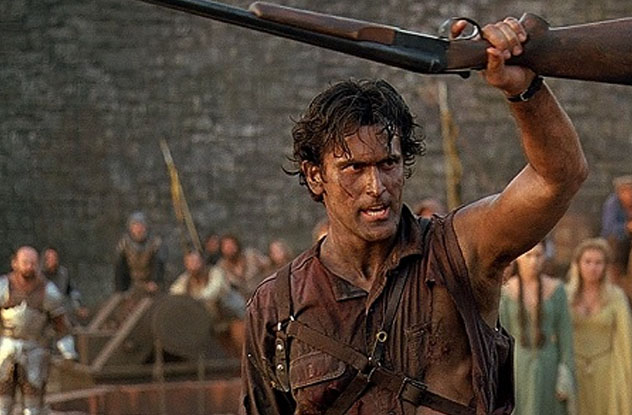 Army of Darkness is a cult classic among horror fans, serving as the culmination of two previous franchise entries, Evil Dead and Evil Dead 2. As a series, the movies had progressively gotten wackier in tone, content, and humor: While the first one served as a relatively straightforward “cabin in the woods” horror flick (the plot of which was the focus of the recent Evil Dead remake), Evil Dead 2 revised the tone with standout oddball gags like protagonist Ash’s own severed hand playing cat-and-mouse with him before trying to kill him.

Evil Dead 2 ends with Ash sucked through a vortex to medieval times, and Army of Darkness centers on his struggle to get back to his own time period. After fighting and wisecracking his way through a skeleton army and building an artificial hand using only the school textbooks in his old car, Ash is ready to go home. In the known ending, he makes it home just fine—and aside from a deadite attack at S-Mart where he works, Ash’s life is pretty groovy. In the bleak original ending, though, he drinks too much of the magic potion intended to return him home, ending up in a post-apocalyptic wasteland. While this would be tonally in line with earlier movies, the happy one—in which Ash implores everyone to “hail to the king” of his victorious character—resonated much more with audiences.

I Am Legend | Alternate Ending Behind The Scenes | Warner Bros. Entertainment

This movie saw Will Smith’s Neville as one of the last survivors of a worldwide virus, which transformed people into seemingly mindless monsters shunning all sunlight. Neville is obsessed with finding other humans and devising a cure for what ails these “Darkseekers.” He eventually finds both, and he gives his life to destroy an attacking horde and save a woman and a young boy immune to the virus. In the final cut, the cure Neville hands to the woman before he dies becomes part of his “legend” as someone fighting for humanity.

The original ending to the movie, however, has a darker twist, one more in line with the Richard Matheson novel and earlier adaptations. It turns out that the monsters are not-so-mindless, and one of them visually communicates his desire that Neville return a female experiment subject. Neville survives and leaves with the woman and boy, realizing that all of the “monsters” he has killed and experimented on through the years have been capable of thought. To them, he is the legendary monster who comes for them when they sleep. 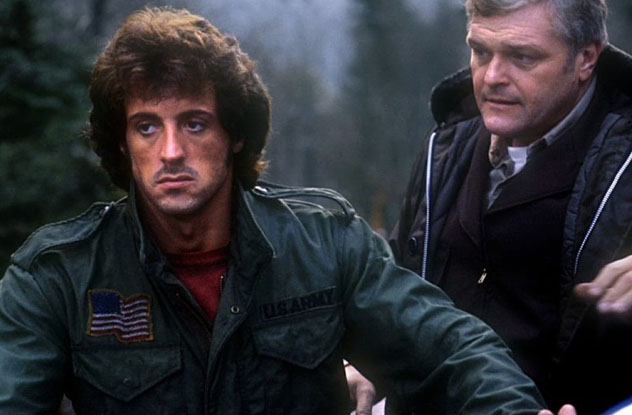 Beneath all of the Rambo series’s flashy action and macho gunplay, First Blood remains an impressive meditation on how the costs of war plague soldiers long after the battle. Sylvester Stallone’s Rambo character is the archetypal Vietnam veteran, ignored by his country and lashing out at a small-minded police force when they arrest and torment him. Eventually, he is confronted by the man who trained him, Colonel Trautman; Rambo tearfully recounts the horrors of war and then lets himself be arrested.

The original ending, however, fulfills the brief premise of the movie much more fully. Rambo—someone who had been imprisoned and tortured as a POW during Vietnam—realizes that he could never spend the rest of his life behind bars. He forces Trautman to kill him. While sadder, this ending reinforces that Rambo’s external battle with small town America actually mirrored his internal battle with himself. 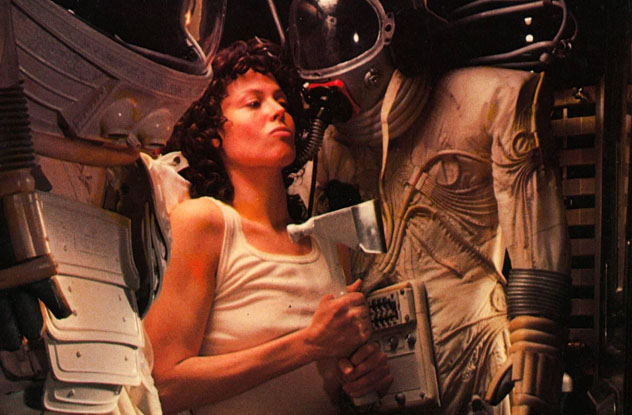 Ridley Scott’s Alien is a complex film launched from a beautifully simple concept: heighten the isolation of the typical cabin-in-the-woods horror film with a monster loose inside a spaceship. The filmed ending shows Ripley (Sigourney Weaver) triumphing over the titular alien by blasting him into space. As the sole survivor, Ripley heads back home. While not necessarily a fully happy ending, it was one horror fans were familiar with, with the plucky lone survivor emerging victorious.

This was not always the plan, though. Scott’s original vision involved the alien killing Ripley and biting her head off. Afterward, the alien would further shock audiences by sitting in Ripley’s chair and mimicking her voice while leaving a message for Earth. This offers a wildly different view of the aliens as independently thinking beings, something definitively eliminated by the James Cameron sequel in which they’re mindless drones under an intelligent queen’s sway.