Twelve astronauts landed on the Moon between 1969 and 1972 on Apollo missions 11 through 17. They brought with them plenty of equipment essential for their survival, but they also took some rather less-expected items.

Galileo is known, in part, for suggesting that heavy things and light things fall at the same rate, at least if there’s no air resistance. Unfortunately, he had no way to remove air resistance in his experiments. Instead, he rolled balls down ramps to minimize air resistance and keep the balls to measurable speeds.

The Moon has no air, and hence no air resistance. It’s a great place to demonstrate Galileo’s principle, and Apollo 15 astronaut David Scott did just that. He dropped a hammer and a feather from the same height, and they hit the ground at the same time.

When Scott in the above video says, “The feather happens to be, appropriately, a falcon feather, for our Falcon . . . ” he’s referring to their Lunar Module named Falcon. It got that name because the crew had ties to the US Air Force Academy, whose mascot is a falcon.

Read more about one of America’s most historic moments in Moon Shot: The Inside Story of America’s Apollo Moon Landings at Amazon.com!

9Bread And Wine For Communion 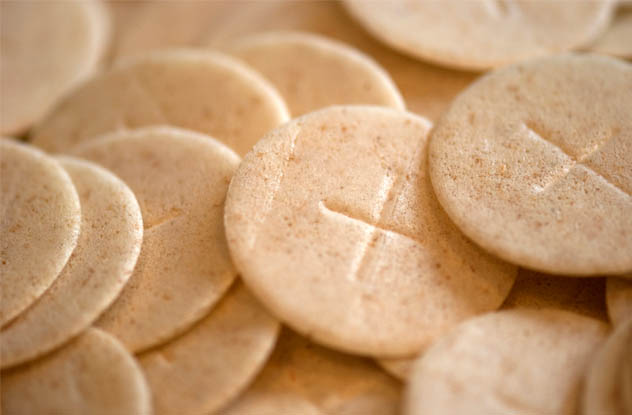 It wasn’t publicized at the time, but Apollo 11 astronaut Buzz Aldrin took Communion on the Moon.

Aldrin was an elder at his Presbyterian church at that time. He asked his pastor how he might mark the occasion of the first humans landing on the Moon. The pastor prepared a Communion wafer and a small vial of wine, and Aldrin brought those with him into space. A few minutes after landing on the Moon, he made the following public announcement on the radio:

“This is the LM pilot. I’d like to take this opportunity to ask every person listening in, whoever and wherever they may be, to pause for a moment and contemplate the events of the past few hours and to give thanks in his or her own way.”

Then Aldrin halted radio communication with Earth. He removed the bread from its plastic package, and he poured the wine from another plastic package into a small chalice that his church had given him. He read a verse from the gospel of John (which he’d written on a notecard), ate the bread, and drank the wine.

Aldrin wanted to broadcast the verse on the radio, but NASA asked him to refrain because of an earlier incident. When Apollo 8 astronauts had read from Genesis while orbiting the Moon on Christmas, the agency had faced a lawsuit. NASA didn’t, however, try to keep Aldrin’s Communion a secret; it’s noted in their official history. Aldrin also described it in his book Return to Earth. 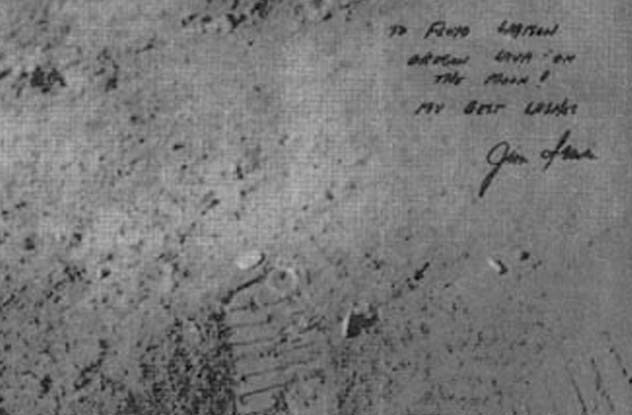 NASA trained astronauts for Moon-walking and lunar geology operations by sending them to practice at Moon-like places on Earth. Bend, Oregon happened to be near several such places, so the astronauts would often stay there. One local journalist dubbed the area “Moon Country.”

In 1966, one of the trainees at Bend was James Irwin. Each astronaut was paired with a local host, and Irwin got paired with Floyd Watson, the city’s building inspector. Five years later, when Watson heard that Irwin was selected to land on the Moon with Apollo 15, he wrote Irwin to ask a favor:

“I am sending you a small sliver of Central Oregon lava [from Devil’s Lake, near Bend] that I hope you will be able to deliver to the Moon for me . . . I have five grandchildren who will be eternally grateful to you.”

Shortly after the Apollo 15 crew returned to Earth, Watson got a letter from Irwin: “I did carry your sliver of lava to the Moon and left it there . . . ” A photo of the lunar surface was included with the letter. There’s a hand-drawn arrow pointing at the sliver, plus a handwritten note that says, “To Floyd Watson / Oregon Lava on the Moon! My best wishes / Jim Irwin.”

7Pieces Of The Wright Flyer 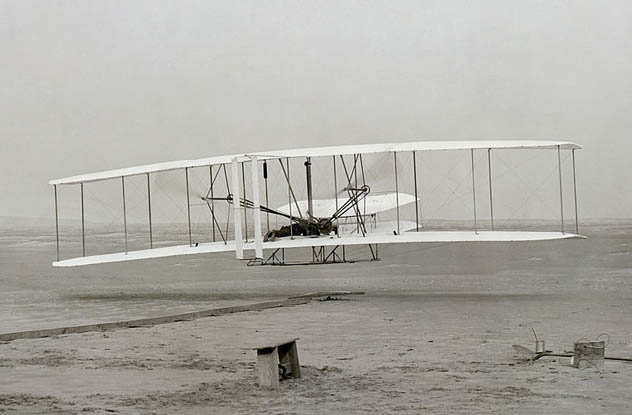 The Wright brothers were from Ohio. Apollo 11 astronaut and Moon-walker Neil Armstrong was also from Ohio. He brought several items to the Moon in his Personal Preference Kit (PPK), but according to a recent Armstrong biography (First Man: The Life of Neil A. Armstrong by James Hansen) :

“He is most clear about, and most proud of, the pieces of the historic Wright Flyer that he took to the Moon. Under a special arrangement with the U.S. Air Force Museum in Dayton, he took in his LM [Lunar Module] PPK a piece of wood from the Wright brothers’ 1903 airplane’s left propeller and a piece of muslin fabric (8 x 13 inches) from its upper left wing.”

Armstrong brought those pieces back to Earth, and they’re on display at the Wright Brothers National Memorial near Kitty Hawk. 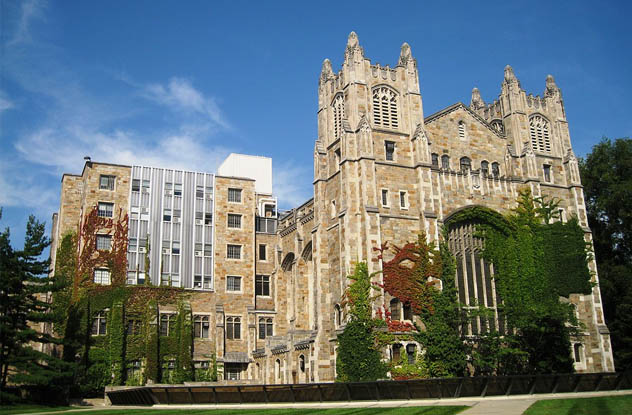 All three Apollo 15 astronauts (David Scott, Alfred Worden, and James Irwin) studied at the University of Michigan, so they decided to make a nod to it during their mission. They founded a UM alumni association chapter based on the Moon. As proof, they left behind a small plaque, which reads:

“The Alumni Association of The University of Michigan. Charter Number One

This is to certify that The University of Michigan Club of The Moon is a duly constituted unit of the Alumni Association and entitled to all the rights and privileges under the Association’s Constitution.”

UM is still the only school to have an alumni chapter based on the Moon. 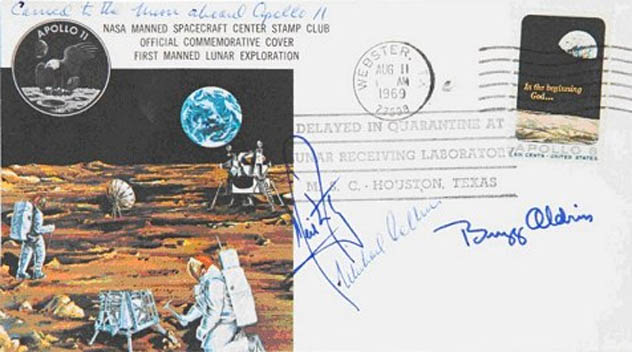 A “postal cover” or “cover” is what stamp collectors call the outside of an envelope, postal card, or package. It typically has an address and a canceled stamp. They’re collector’s items.

The Apollo 11 astronauts brought 214 postal covers (crew-signed envelopes with a postage stamp) to the Moon. Armstrong brought 47, Collins 63, and Aldrin 104. They’re known as the “Flown Apollo 11 Covers.” (There were “insurance covers” as well; those stayed on Earth in case the crew didn’t return.) Over the years, some Aldrin and Collins covers have surfaced for sale, but according to the Hansen biography, Armstrong kept all of his.

Other Apollo crews brought postal covers to the Moon, but the Apollo 15 crew managed to create a scandal. They brought 243 authorized covers, but they also brought 398 unauthorized covers. The unauthorized covers were provided by a German collector named Hermann Sieger, who then got 100 when they returned from the Moon. Sieger sold those right away, even though he’d told the astronauts he’d wait until the Apollo program was over.

When word got out about the Sieger sale, Congress asked embarrassing questions and NASA took disciplinary action. It was a fiasco. Today, one flown Apollo 15 cover can fetch thousands of dollars at auction.

Be proud of your inner nerd! Buy an Apollo 11 Moon Landing Wall Poster at Amazon.com! 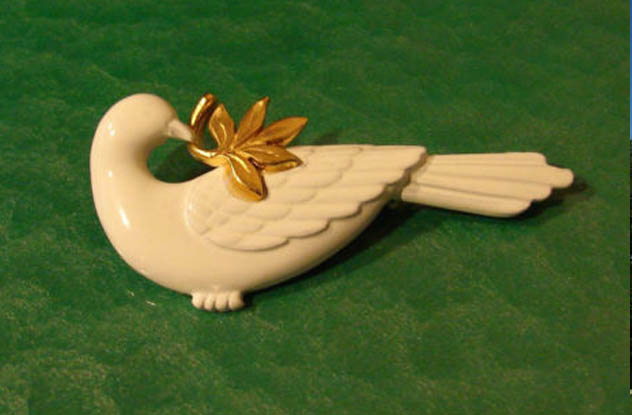 Some of the Apollo astronauts brought pins to the Moon, the kind one wears on the front of a suit or dress. Some were left on the Moon and some were brought back. The most notable ones are probably the ones left on the Moon.

The Apollo 11 mission patch shows an eagle carrying an olive branch to the Moon, the olive branch being a traditional symbol of peace. The Apollo 11 Lunar Module, which landed on the Moon, was named Eagle, and it carried two astronauts, one of whom left a gold olive-branch pin on the surface.

Astronaut Alan Bean made his first trip into space for the Apollo 12 mission. He took his silver astronaut pin. Soon after landing on the Moon, Bean wrote, “ . . . I removed my silver pin, took one last look at it, and gave it my strongest underarm toss . . . I can still remember how it flashed in the bright sunlight then disappeared in the distance. It was the only star I ever saw up in the black sky, the sunlight was just too bright on the Moon’s surface to see any of the others.” 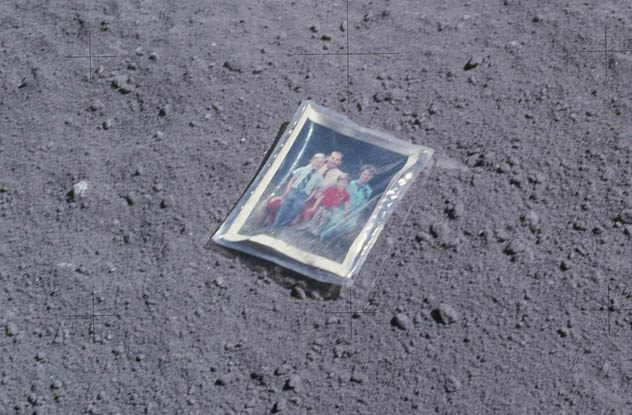 Astronauts took some photos to the Moon, but the most famous has to be the one that Apollo 16 astronaut Charles Duke left on the surface. It shows Duke, his wife Dorothy, and their two sons, Charles and Thomas, sitting on a bench. The back of the photo had the message:

“This is the family of Astronaut Duke from Planet Earth. Landed on the Moon, April 1972.”

Below that message were the signatures of his wife and kids. The photo was shrink-wrapped in clear plastic, and shortly after placing it on the surface, Duke took a photo of it lying there (using one of the Hasselblad cameras the astronauts had on the Moon). Photographic prints left out in sunlight get ruined quickly, even on Earth, so it probably didn’t last long.

2Two Golf Balls And A Six-Iron

Alan Shepard Hits A Golf Ball on the Moon

Alan Shepard was the first American to journey into space. He was also one of the astronauts on the Moon for Apollo 14. During the second Extra-Vehicular Activity (EVA), he revealed that he’d brought two golf balls and a golf club to the Moon in his utility pocket.

In Shepard’s words, “Unfortunately, the suit is so stiff, I can’t do this with two hands, but I’m going to try a little sand-trap shot here.” The first swing “got more dirt than ball.” The second swing moved the ball two or three feet. The third swing connected, sending the ball on a short arc. Then he dropped the second ball, swung, and that one went, “miles and miles and miles.”

The golf balls are still on the Moon, but he returned the six-iron to Earth. It’s usually on display at the USGA Museum near Far Hills, New Jersey. There’s also a replica at the Smithsonian National Air and Space Museum in Washington, D.C.

1The Silicon Disk Of Goodwill Messages 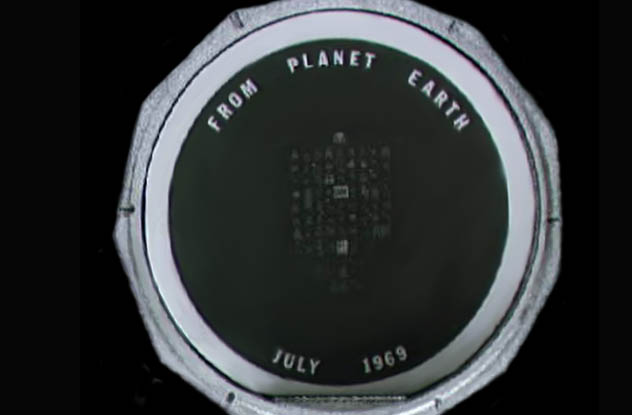 One of the things Armstrong and Aldrin were supposed to leave on the surface was a silicon disc about the size of a US half-dollar coin (3.81 centimeters or 1.5 in across). They almost forgot.

Engraved on that disc, in writing so small you need a microscope to read it, is a set of goodwill messages from notables in 73 countries, including Queen Elizabeth II, Indira Gandhi, and Pope Paul VI. There’s also a list of congressional and NASA leaders.

That disc was largely forgotten for almost 40 years, but then Tahir Rahman, a space-history enthusiast, became curious and began researching it. He ended up writing a whole book, entitled We Came in Peace for All Mankind: The Untold Story of the Apollo 11 Silicon Disc.

The disc was designed to last on the lunar surface for thousands of years. It’s enduring proof that even though many of the leaders of 1969 were at odds with each other, they were, for a moment, united in their hope that humanity would extend its reach to touch a new world.

Troy McConaghy is a graduate of the International Space University and Purdue University (Aeronautics & Astronautics).