If you didn’t grow up in England, there’s a chance you’ve never heard of Charles Bronson. And if you’re lucky, you’ll never actually meet the guy. He’s a well-spoken, eccentric man who, after carrying out bizarre and outlandish crimes, achieved a weird notoriety among the British public over the last few decades and has became an iconic but tragic figure. And even though he’s never killed anyone, he’s spent more time in jail than most of Britain’s mass murderers. Here are just a few facts about his life. 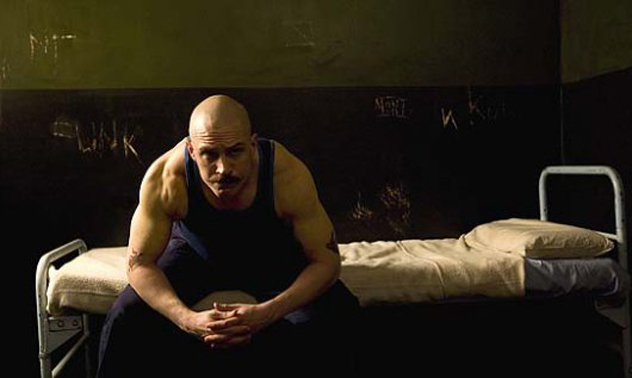 Charles Bronson is Britain’s most notorious prisoner. For 40 years, prison staff all over Britain have struggled to contain him due to his massive strength, propensity toward violence, and growing popularity. It all started in 1974 when Charles Bronson (then still Michael Peterson) was arrested for a robbery where he tried to get away with the princely sum of £26 (about $43). He was sentenced to seven years in prison—with good behavior he’d be released in four. But to this day, Bronson’s spent more than 40 years behind bars due to a series of increasingly violent and bizarre acts.

Since 1974, he’s been to more than 120 prisons across the United Kingdom, attacked more than 20 prison guards (and countless prisoners), taken 11 hostages, and caused more than half a million pounds in damages. If one sentence could sum up Charles Bronson it would be the quote that adorns one of his own books: “I fear no one. Violence just makes me madder and stronger.”

Watch the film that brings this incredible (and insane) man to life! Watch Bronson with Amazon Prime at Amazon.com! 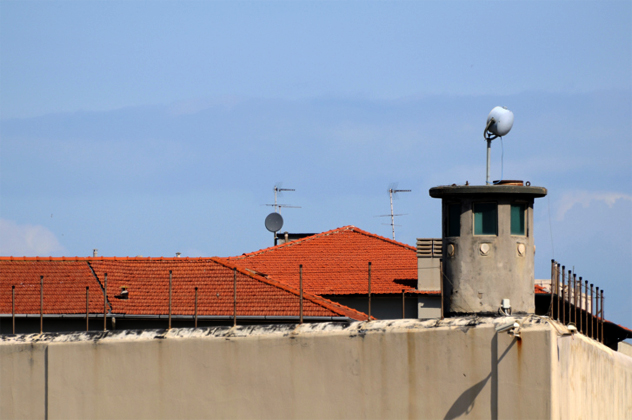 In 1978, Bronson was declared insane and sent to Broadmoor Hospital, which is basically Britain’s version of Arkham Asylum—the most secure facility for people who are criminally insane in the UK. Although violent, Bronson didn’t see himself as insane and during this time he again proved to be a problematic prisoner. He alleges that he was badly mistreated, forcibly injected with anti-psychotic medication that left him wracked with painful muscular spasms, and regularly beaten by prison staff. He protested by escaping to the roof and staying up there for “the best part of a week” before being talked down by his brother, after which he was again savagely beaten for the infraction.

It’s estimated that he caused a staggering £750,000 worth of damage to the roof in that one incident alone. While he was at Broadmoor, he escaped to the roof another two times. He was later released after being diagnosed sane, but went on to carry out rooftop protests another five times at different prisons. According to the man himself, “I’ve been on more roofs than Santa Claus.” 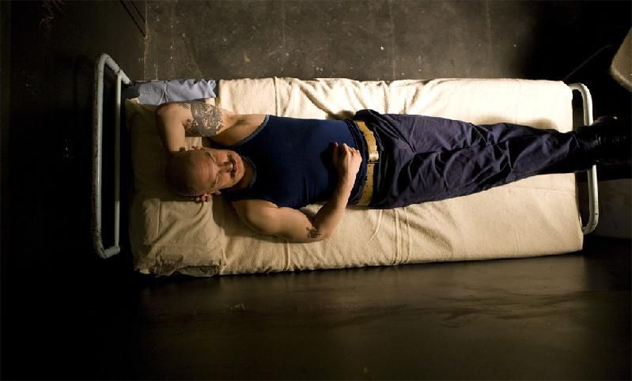 In 2007, Charles Bronson released a fitness book documenting his prison workout routine called Solitary Fitness. It explains how someone can get ripped without workout machines, supplements, expensive sports clothing, or health food. Basically, it explains how someone who has spent most of his life locked in solitary confinement can become an unstoppable juggernaut like himself. According to him, his techniques can give you extreme power. He talks about a technique called the Solitary Cow Punch, which is so strong that he says he’s used it to knock out a cow. He claims his fitness regime also allows him to punch through bulletproof glass, kick down steel doors, lift grown men above his head, and drop 9 meters (30 ft) without injuring himself.

Although the book sounds like it was written by a man who’s no stranger to shameless hyperbole, there may be something in it. It’s a documented fact that Charles Bronson has exhibited almost superhuman strength during his time inside. For example, he’s been known to bend steel cell doors with nothing but his bare hands and he once held a world record for push-ups—he claims to do 2,000 every day. Among other things, the book documents some of the other supremely weird techniques he uses, such as flossing his nostrils with twine and using his stomach muscles to irrigate his colon by sitting in a bowl of water and, well, sucking up the water. He also cleans his stomach by swallowing strips of wet cloth and pulling them back out again. You probably shouldn’t try that at home.

Think you have what it takes to train like Charles Bronson? Buy Solitary Fitness at Amazon.com! 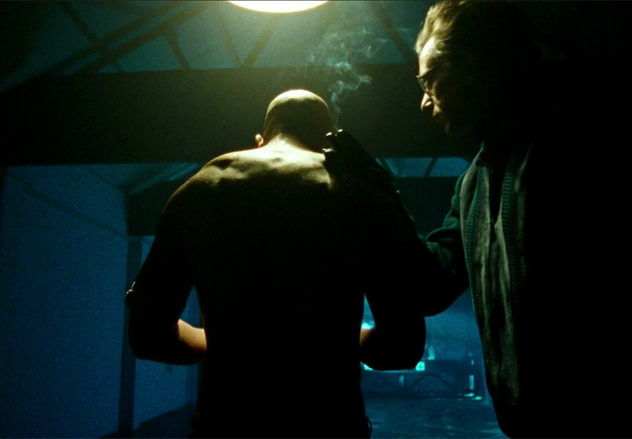 While in jail, Charles Bronson met and befriended Ronnie and Reggie Kray, Britain’s most violent and dangerous gangsters. Bronson described them as “the best two guys I’ve ever met in my life.” In 1987, Bronson was due to be released and was looking for something to do on the outside. He was introduced to a friend of the Krays who set up him up as an illegal bare-knuckle prizefighter.

It was at this time that Bronson first started calling himself Charles Bronson after the actor from the Death Wish movies. During his career as a prizefighter, he was involved in at least one fight where he fought a rottweiler for £1,000. He only managed to spend 69 days outside before being arrested for another attempted robbery. 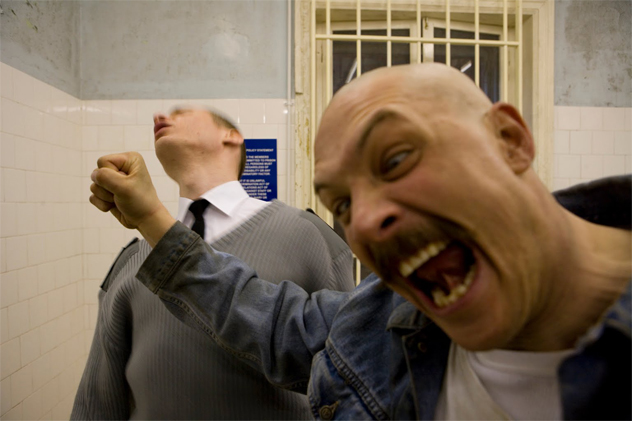 As mentioned earlier, Charles Bronson has taken a staggering 11 people hostage in his 40-plus years of prison. In 1994, Bronson took a guard hostage and demanded a helicopter and a blow-up doll. After that, no other prison wanted to take Bronson due to his reputation. The Governor of Hull gave him a chance and was willing to believe that Bronson would behave this time. Instead, Bronson took him hostage.

In 1996, Bronson took two Iraqi terrorists and a third prisoner hostage after one of them accidentally bumped into him and didn’t apologize. During the hostage situation, he forced them to tickle his feet and call him “general.” The experience for these hostages must have been pretty terrifying. At one point, he tried to force them to hit him over the head with a heavy, metal tray and when they refused, he grabbed a razor blade and began to slash his upper body. This time his demands included Uzi machine guns, an axe, thousands of rounds of ammo, a cheese sandwich, and a helicopter to Cuba. If the demands weren’t met, he threatened to eat one of the prisoners. He didn’t get any of that stuff and eventually gave up. 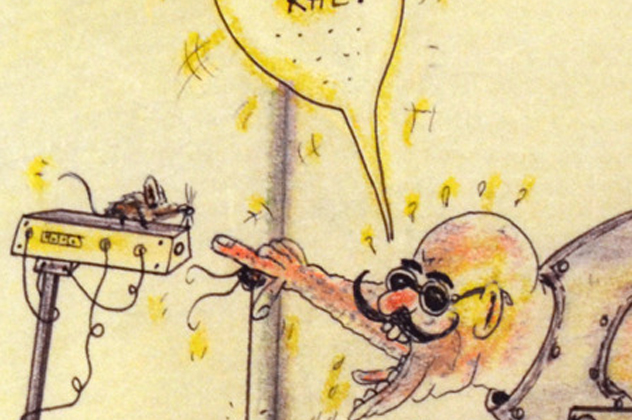 With all those years in prison, Bronson has had plenty of time to develop a reputation as an “outsider artist.” He’s won seven Koestler awards for art and poetry and has had his work featured—illegally—on the London Underground as well as published in several newspapers and magazines (with all the proceeds donated, by him, to children’s hospices). However, it all went wrong when Bronson’s prison art teacher, Phil Danielson, took a vested interest in Bronson as a gifted student. He got pretty close to Bronson and their relationship blossomed into something like trust until one day he was overly critical of one of Bronson’s paintings.

Bronson lost it. He tied up Danielson with a skipping rope and then fashioned a spear out of a knife and a pool cue and held Danielson hostage for 44 hours, all the while gibbering, ranting and raving, and forcing Danielson to march around the room for his amusement. Bronson will probably never be released after this incident—it garnered him a life sentence. Danielson, traumatized by the incident, will probably never work again. 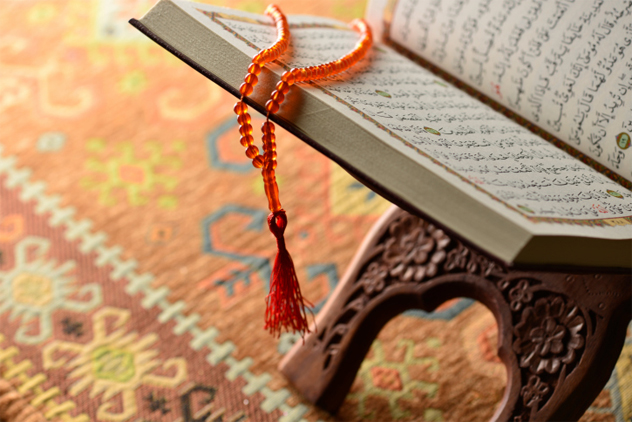 In 2001, Charles Bronson was contacted by a Muslim woman named Saira who had seen his picture in the paper and become fascinated by him. She wrote to Bronson and he wrote back, and pretty soon they got married. He was 48 and she was 31. Later that year, Bronson changed his name to Ali Charles Ahmed in honor of his new wife’s father and converted to Islam. According to Bronson’s book Loonyology, he was later visited by two people he believes were government spies.

Two mysterious men in dark suits arrived one day and tried to recruit him to spy on other Muslim prisoners. When he asked them who they were, they said, “It’s not who we are, it’s what we are.” Bronson refused their offer by spitting in their faces, and they left after threatening that there would be repercussions. According to prison officials, the incident never happened. The marriage ended up lasting four years before the two got divorced and Ali Charles Ahmed renounced Islam and became Charles Bronson once again.

In 2009, Charles Bronson’s life story was made into a movie with Tom Hardy in the role of Bronson. Tom Hardy visited Bronson in prison multiple times to get a grip on the character and described Bronson as “a very articulate, gentle, funny, and clever man.” Although Hardy was quick to condemn Bronson’s violent acts, he stressed that it was his duty as an actor to understand the character he was playing without getting judgmental about it.

Bronson really liked Tom Hardy, and Hardy was desperate to make sure that he didn’t upset Bronson with his performance in case he ended up “rolled up in a carpet and dropped to the bottom of the Thames.” So while filming, he made sure to have a close friend of Bronson’s on hand for questions and spent a lot of time with Bronson’s family. Bronson was so into the whole idea of being immortalized in film that he actually shaved off his iconic mustache and sent it to Tom to wear in the movie.

2The Campaign For His Release

Charles Bronson is now over 60 years old. He’s been in jail for over two-thirds of his life and is kept in isolation at all times with five guards assigned to make sure there isn’t an incident every time he moves. Despite the fact that every appeal he’s made has been denied, his case has recently been the center of a campaign for his release that’s gathered 10,000 signatures. Bronson’s supporters argue that he has spent more time in jail than most murderers (Charles Bronson’s incidents, although violent, have never resulted in a death) and that he has recently turned over a new leaf, renouncing his old, violent ways.

His supporters are now planning a fourth appeal, and if that fails they will lobby the European Court of Human Rights. This means that if he plays his cards right, he could be released in just a few years. Unfortunately, that probably won’t happen. 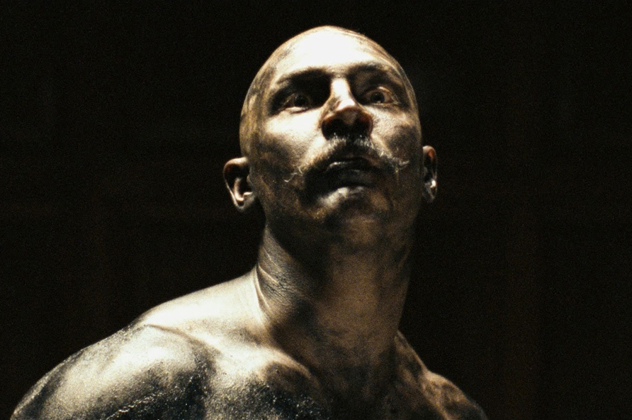 Despite now being old enough to qualify for a pension, Charles Bronson was recently involved in an attack on a prison officer that saw him moved to another jail. Another incident so bizarre and violent that it’s been making headlines happened a few months later. In May 2014, he was watching the FA cup final between Arsenal and Hull and found himself incensed at Arsenal’s victory. He says that he saw the ghost of Ronnie Kray encouraging him to start a riot with the guards.

So, using his own internal logic, he stripped naked and covered himself in butter so that he would be harder to restrain and attacked at least a dozen guards in full riot gear, breaking a few of his ribs in the process. With that we can assume that Charles Bronson is pretty much the same as he ever will be: fascinatingly complex and utterly, completely bonkers.

Aaron is a film student and feelance writer who hopes Charles Bronson never, ever finds out where he lives. You can add him on Twitter here.