Fan art has a bad reputation. Amateurs and hobbyists make it, so we assume it must be awful because surely anyone with artistic skill would devote their time to creating an original brand. Additionally, since fans don’t have to answer to anyone or conform to guidelines, they’re free to make fan art as personal or fetishistic as they wish. Plus, the sadists among us enjoy laughing at freaks more than we do appreciating competent artwork.

Nevertheless, those in the know realize fan projects can be extremely beautiful. The ones on this list might fall in that category, but they’ll also likely provoke a slightly different reaction. 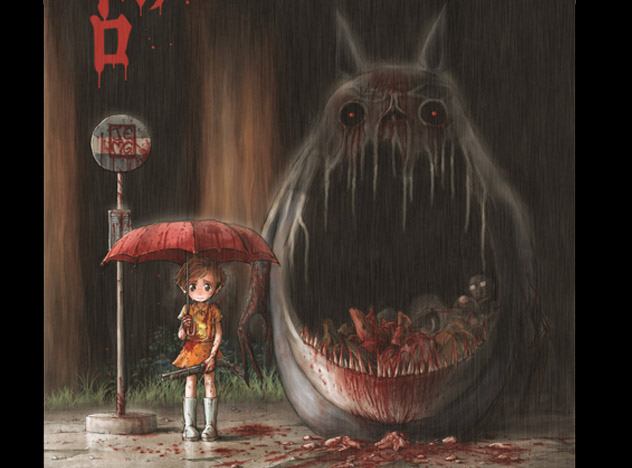 My Neighbor Totoro is highly regarded among animation fans, including Roger Ebert, who said it made him “smile, smile, smile.” It has been named one of the best animated films from Japan of all time. It’s also semi-autobiographical, covering writer-director Hayao Miyazaki’s time dealing with his mother’s cancer. He fictionalized his story greatly, though, starting with changing him and his brother to sisters and then adding explicit fantasy elements like coal dust spirits and immense, friendly trolls.

All the whimsy and charm is set aside in this 2007 image by Jorwal “Sachsen” Gartakilagayan. Totoro has been changed from a charming creature to a demon with a massive maw full of gore. Inside that mouth, on the right, you’ll see the remains of the film’s father figure. Satsuki (the older of the aforementioned sisters) has a shotgun and is crying but seems to feel a need to try to control her emotions. Since Totoro is not attacking her, and she’s not attacking it, she is likely being made a party to this monster’s rampage in exchange for being allowed to live.

Watch the groundbreaking film that inspired this gruesome work of art! Buy My Neighbor Totoro at Amazon.com! 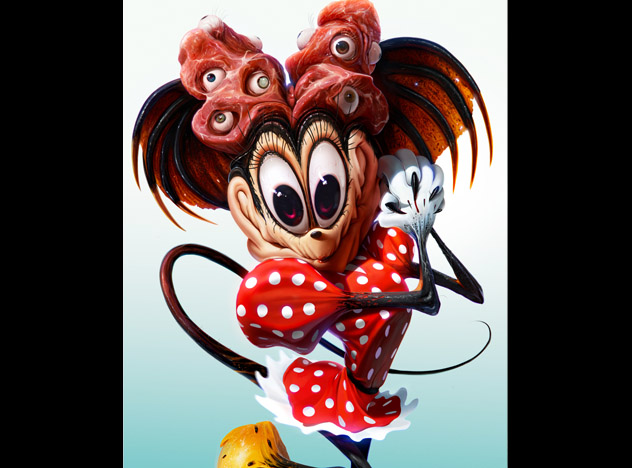 This piece was digitally painted by expert artist Daniel LuVisi, one of the early concept artists for World War Z, who just sold the rights to his comic book to Paramount. He has done a series of tributes to major pop culture figures such as Disney characters, including the above version of Minnie Mouse painted in 2014. He plans to release a collection of these images, presumably under fair use protection.

He masterfully renders the textures, particularly on the meat ribbon and webbing for the ears. The entire piece is certainly vibrant and alive. 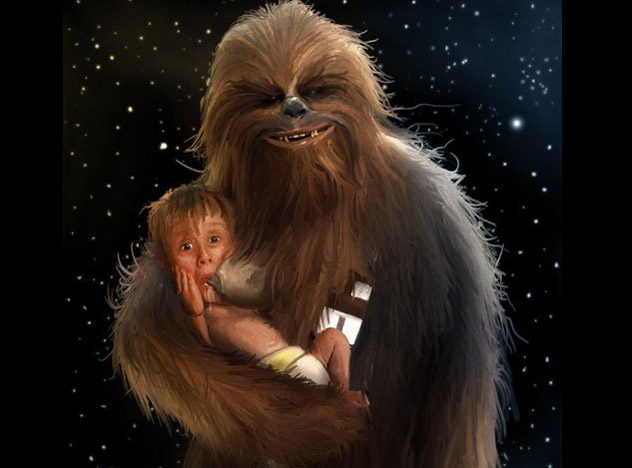 In 2010, digital painter Sam Spratt agreed to create whatever his fans requested of him. Inevitably, this opportunity compelled some of his fans to plumb the weirder and more unpleasant places in their imaginations. Spratt decided to go with “Chewbacca breast-feeding Macaulay Culkin . . . in space” as recommended by commenter JackHolliday.

Observe how Culkin is horrified by the nipple in his mouth, in a clear imitation of his famous scared face from Home Alone. Chewbacca, fully aware of this fear, just grins at the viewer, adding a predatory tone to the piece.

To date, Sam Spratt hasn’t posted anything else so twisted to his art profile. 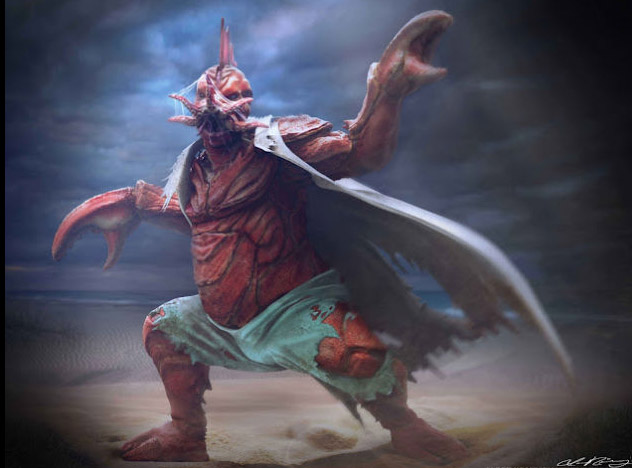 Usually, the show Futurama portrayed Dr. John Zoidberg as a lovable loser. The alien surgeon was forced to live in a dumpster because he knew nothing about human anatomy yet set up his medical practice on Earth. As digitally painted by Jared Krichevsky in 2012, he looks like something that H. P. Lovecraft’s gillmen would have nightmares about.

The slime on his facial tentacles and the torso shell are especially gruesome, even if the claws aren’t quite as sharp and threatening as they could be. Krichevsky has given other alien characters from Futurama a similar treatment, including Morbo the newscaster and Kif Kroker, but his Zoidberg is the most horrifying one by far, if only for his threatening body language.

You can’t buy the picture above, but why not settle for an awesome “A Mindless Worker is a Happy Worker” Futurama Poster at Amazon.com! 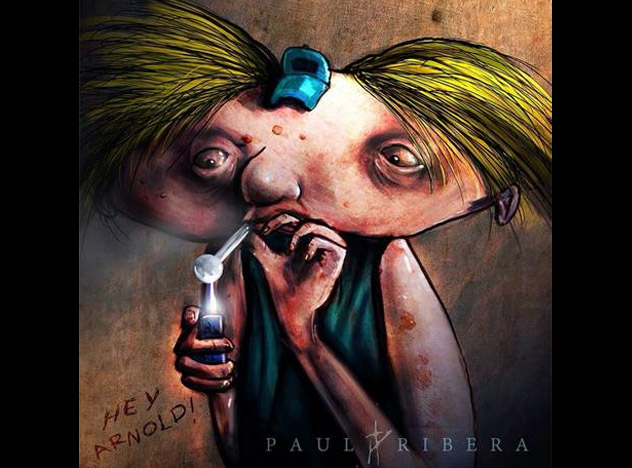 Growing up in Barstow, California inspired Paul Ribera’s 2013 series on the effects of addiction. Drug abuse there is apparently so common that he calls it “a way of life.” So he drew characters like the Powerpuff Girls and Doug with skin consistent with drug addicts and colored their eyes and teeth unnaturally.

The pictures also seem to delight in how bizarre these cartoon characters would look if rendered as anything resembling a realistic human being. The above image of Arnold from the cartoon of the same name would clearly look more bizarre than charming even were he drawn without any indication that he does drugs. 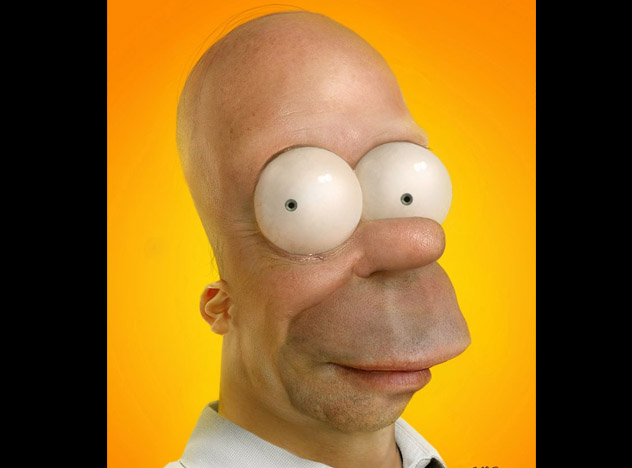 Like Paul Ribera but overtly horrific and using 3-D rendering, artist Jax Pixeloo converted beloved Simpsons characters into denizens of the uncanny valley in 2008. While fans circulate his Mario image more widely (since it’s sort of cute with a bulbous nose and big ears) his version of Homer Simpson is the most memorable. Even his version of Mr. Burns is significantly less off-putting, probably because the show portrays him as menacing anyway.

Unfortunately, Pixeloo doesn’t seem to have updated his site since 2011, which is a real shame, considering what cartoons like Rick and Morty would have given him to work with. 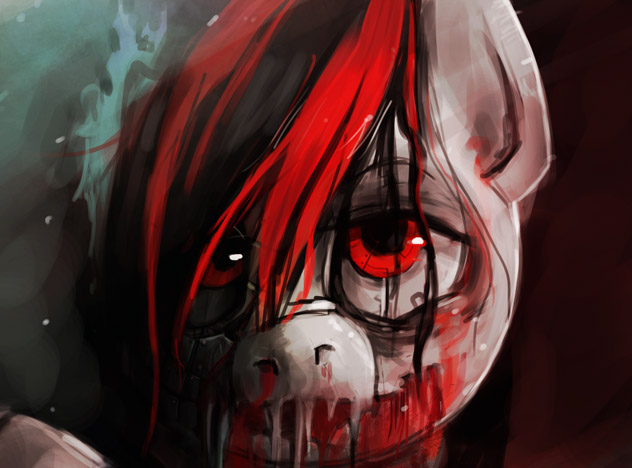 Fallout: Equestria mashes the My Little Pony: Friendship is Magic universe with the post-apocalyptic alternate history video game series Fallout. The tale is full of dark and violent imagery dragged out over 600,000 words, making it significantly longer than War and Peace. A five-volume printing went for $80 a sale, earning the author more than $32,000. With success like that, the story inspired numerous fan stories of its own.

That brings us to Project Horizons, which takes all the quirky aspects of Fallout: Equestria to extremes. It opens with a lesbian horse shower scene and quickly moves into horror, with a poison gas that dissolves characters from the inside out. The protagonist is of course repeatedly raped and at one point sees horses in a lab merged into a single mass, dubbed the “wall choir” for how they scream in symphony.

The material stretches out for a staggering 1,400,000 words. If this ever gets printed, it would possibly be the longest book in the English language. 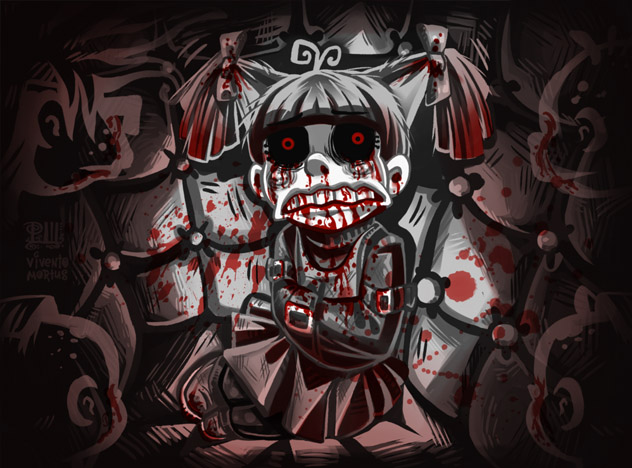 Online horror communities often take a children’s story and imagine the events as the hallucinations of a single character. Cartoons subjected to this treatment range from Ed, Edd, and Eddy to Adventure Time to Disney’s Frozen. Russian artist Viventomortus has made a rather unsettling little drawing from the notion that the Rugrats are all dead children and miscarriages imagined by their in-show nemesis Angelica.

While the solid black eyes with red irises have since become something of a creepypasta cliche, the use of them for a victim of horrors instead of a perpetrator is fairly fresh. The whole piece has an anxious sort of energy that’s quite visceral, even if the scariness is all in the head of the subject. 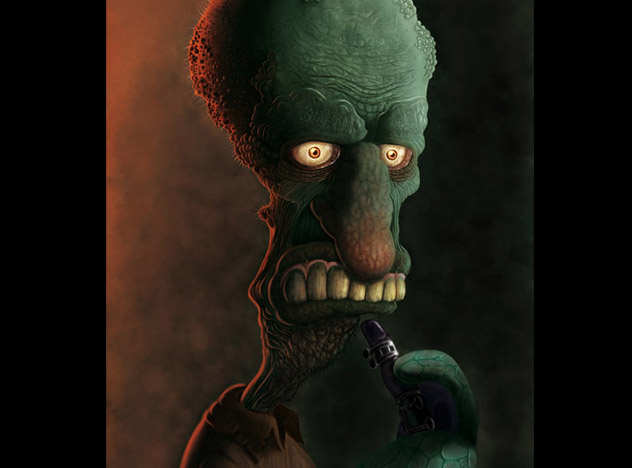 This isn’t the first time we’ve seen Squidward portrayed in a creepy manner. Just look back at the “Red Mist” urban legend. But this piece by Isaac Montoya goes to a whole other level, and not just because it’s clearly more polished and detailed.

Montoya’s Squidward has an almost tangible leathery texture from the pseudopods to the growths on his head. He also has a sickly pallor that makes you want to stay far from him. Still, the mood of the drawing and the character’s facial expression are melancholic, so viewers are meant to feel a little sympathy for Squidward. At least he wasn’t drawn with his elongated mouth from the show. 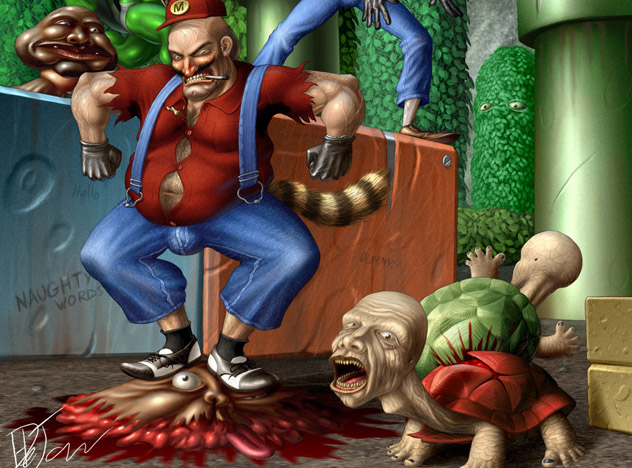 Handre de Jager began a series of video game fan drawings in 2005 for the SomethingAwful.com forum. He regularly took cutesy, 8-bit art, added masculine features, and turned the characters into buff, angry beings. This parodied the then-popular trend of infusing franchises with seriousness.

The most unsettling of this collection transformed the 1985 Super Mario Brothers game. Goomba stomping now appears with graphic gore, and one koopa is bashed with another. The shrieking humanoid face looks like something from Hieronymous Bosch. It will probably be some time before we will be able to crush a goomba or koopa again without thinking of this image.

Dustin Koski invites readers to see what true creepiness means by checking out his book Six Dances to End the World.