While people might worry about the health of organs like the heart, lungs, and liver, not many people think about their eyes. But our vision can be affected by some very strange diseases and conditions indeed.

An extremely rare chromosomal disease, cat eye syndrome appears at birth and is a lifelong condition. The syndrome was named after its signature symptom—an absence of tissue in the eye, which causes the pupil to narrow and push itself into the iris. However, not all sufferers of cat eye syndrome actually experience this ocular abnormality.

Unfortunately, cat eye syndrome also affects the kidneys, heart, ear, and skeletal system. It may also cause hyperactivity and mild mental disability. The condition can often be detected early on, as it causes growth delays before birth.

Treatment varies depending on the phenotype of the sufferer and the severity of the symptoms. The ocular abnormality cannot be reversed, but eyesight can be improved with glasses or other prescription eyewear. 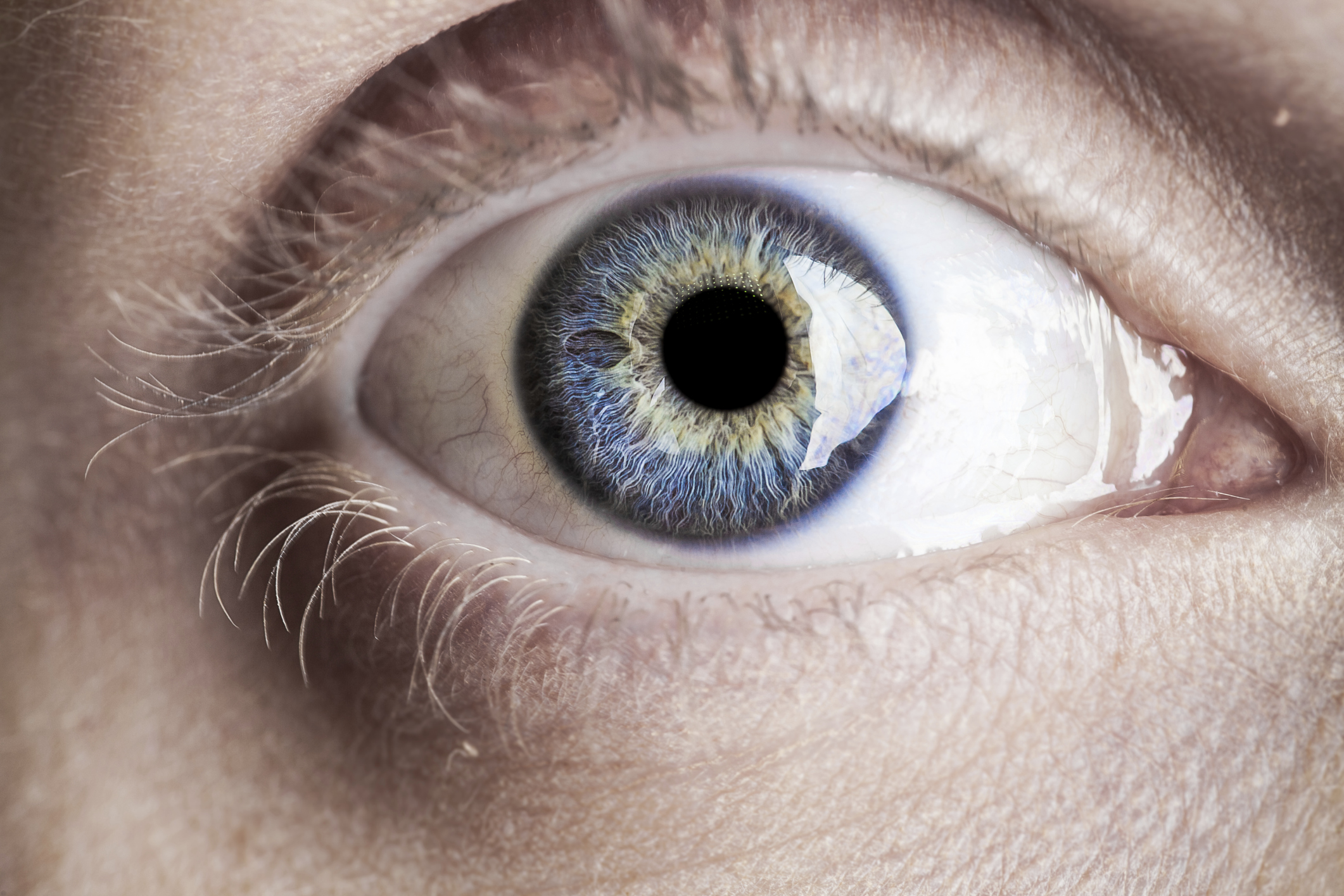 In every case of eye paralysis, the eye loses all sensory and motor functions—and it’s a much more common condition than you’d think. It’s usually a symptom of various diseases, such as diabetes, peripheral artery disease, a tumor in the pituitary gland, or a cardiovascular problem. It is also associated with Kearns-Sayre syndrome, which causes pigment to build up behind the eye and comes with a horrible bonus of heart disease. Other signs of Kearns-Sayre are seizures and deafness, which usually strike in late adolescence. In rarer cases, eye paralysis is a side effect of Moebius syndrome, which paralyzes the entire face. Treatment for eye paralysis depends on the underlying cause—if the cause is cured, the paralysis will be as well.

More of a natural occurrence than a medical condition, hippus can be observed in anybody. When you shine a light into a person’s eye, their pupil will enlarge and contract at a slow pace, as it adjusts to the new, brighter environment. This is the pupil’s normal way of reacting. In fact, if hippus doesn’t occur under these circumstances, that may be a sign of medical problems in itself.

But when hippus occurs without the help of light, it can indicate a wide range of conditions, including neurosyphilis and multiple sclerosis. It has also been linked to renal failure and cirrhosis, and even cerebral tumors.

Normally appearing behind your eye, ocular tumors are unpleasant enough to begin with—but are even weirder when they appear on the outside of the eye. These types of tumors, called limbal dermoids, are almost always benign and usually don’t cause any major vision problems, since they rarely cover the center of the cornea. Doctors who have treated limbal dermoids (a typical ophthalmologist may see one or two cases in their lifetime) say that patients often don’t request surgery to have them removed, because the tumors don’t harm them, aside from the possibility of mild astigmatism.

Some limbal dermoids will grow hair follicles, cartilage, and even sweat glands. One anonymous Iranian man had an eye tumor removed after it sprouted several black hairs, which were causing him mild discomfort. 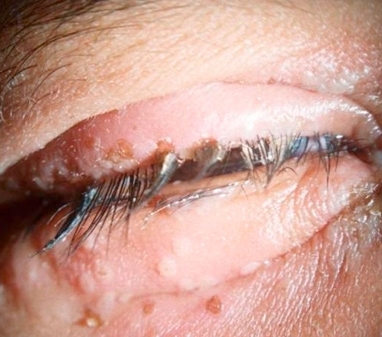 Ocular herpes is exactly what it sounds like: herpes of the eye. It can be caused by the varicella-zoster virus or by herpes simplex type 1. These are distinct from the virus that causes genital herpes and ocular herpes cannot be sexually transmitted (the majority of people will actually be exposed to some form of herpes during their lifetime, mostly without noticing it). Ocular herpes can appear as a sore or bumps on the eyelid. These sores will usually heal within about a week, but until then they can cause redness, headaches, and photophobia.

More unusually, the virus can also affect the cornea itself, resulting in more severe versions of the usual symptoms. In very rare circumstances, herpes can even appear inside of the eye, causing temporary vision loss. 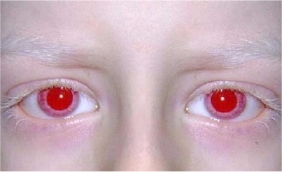 Albinism is a condition caused by insufficient production of melanin, the pigment that gives color to your skin and hair. This melanin deficiency also affects the eyes, which can appear red or pink as a result.

Since albinos lack pigment, their eyes aren’t really red. Instead, the iris becomes transparent enough that the blood vessels behind it show through, creating the reddish color. Unfortunately, the lack of melanin means the retina is less efficient at absorbing light. This causes photophobia, an uncomfortable or painful response to bright light, and can lead to eye damage. Albinism can also inhibit the eye’s development and is strongly associated with astigmatism and other vision problems.

4Star In The Eye 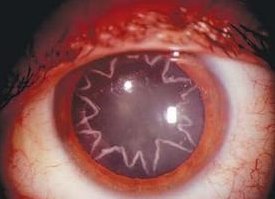 Nine months after being punched in the face, an Austrian man went to the doctor complaining of deteriorating vision. When the doctor examined his eye, he was surprised to find a perfect star-shaped cataract. It’s common for cataracts to form after a blow to the eye, since the shock wave can disrupt the structure of the lens, causing it to become opaque in places. The cataract’s unique shape was a beautiful coincidence. Doctors eventually used sound waves to break up the cataract, which was then removed and replaced with an artificial lens.

A much more serious case of a star-shaped cataract occurred in California in 2004. An electrician’s shoulder came into contact with an exposed wire, causing 14,000 volts to course through his body—including his optic nerve. The initial shock of the electricity created the unusual star shapes. The cataracts were eventually removed, but the damage to the optic nerve was unfortunately permanent, leaving the man with limited sight in both eyes.

A fairly well known condition, heterochromia is a difference in color between the eyes. Most cases are hereditary, but it can be acquired later in life. Heterochromia itself is fairly benign, although it can be a symptom of an underlying condition like Waardenburg syndrome.

Heterochromia can manifest itself in different ways. For instance, not all heterochromia cases involve two totally different-colored eyes. Some people have two different colors within the same eye—for example, with sectoral heterochromia, you could have two blue eyes, but a quarter of an iris might be red or brown. The third type (other than complete heterochromia, which is described above), features a circular ring of color around the outside of the pupil, and is known as central heterochromia. 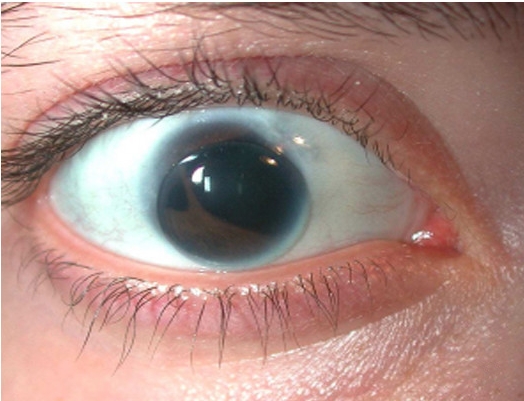 True polycoria is one of the rarest conditions in the world—there have been only a handful of cases in recorded history. Even exactly how it occurs is still unknown. People with true polycoria have two or more pupils in one eye. The pupils are contained in the same iris, but have their own sphincter muscles and are capable of operating independently of each other.

Much more common is a condition called pseudopolycoria. People with this condition simply appear to have two or more pupils. However, the additional “pupils” are merely holes in the iris, lacking a pupillary sphincter, and do not function as true pupils. One Massachusetts woman appeared to have five pupils in one eye. The condition apparently did not cause her any major vision problems, other than mild discomfort in very bright light. Other than mild vision loss, polycoria doesn’t affect the inner workings of the eye. 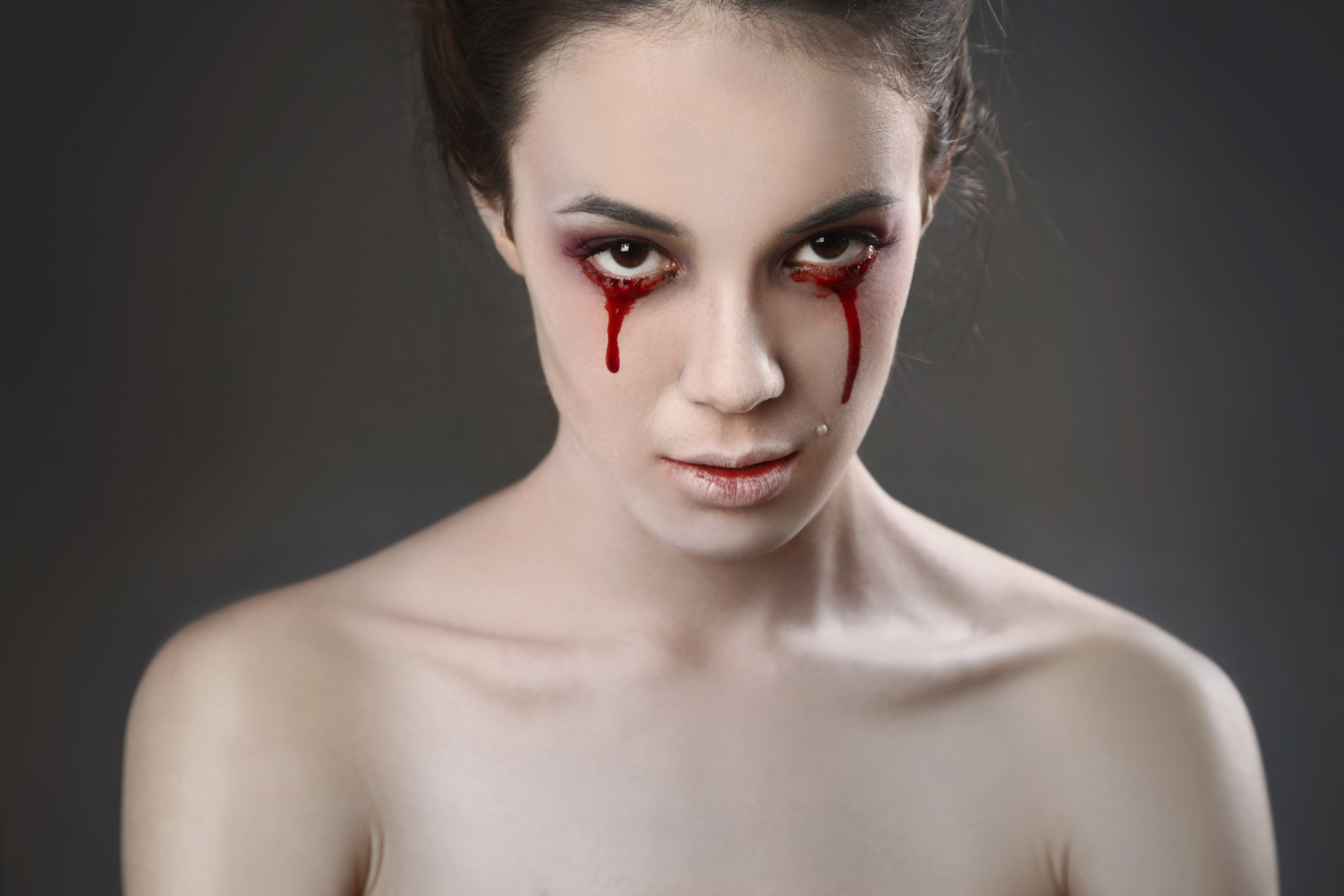 Maybe one of the strangest conditions in medicine, haemolacria is better known as crying blood. In 2009, a teenager named Calvino Inman randomly began weeping blood one day. Reasonably thinking he was dying, Inman was rushed to the hospital and had a CT scan, MRI, and ultrasound. None of these revealed any abnormalities. Today, researchers are still puzzled as to why Calvino keeps bleeding from his eyes.

Another sufferer, Michael Spann, felt a violent pain in his head and suddenly began bleeding from his eyes, nose, and mouth. Ever since then, he has wept blood at least once or twice a week. Spann’s life has been badly impacted: “Any job I get, I lose, because my eyes start bleeding and they can’t keep me on.” Oddly, both Spann and Inman are from Tennessee.

A 2004 study looked at four children with haemolacria, all of whom eventually recovered without any medical treatment. It is unclear what caused Spann and Inman to develop the condition, but Spann at least appears to be recovering—he used to weep blood up to three times a day.