The Teenage Mutant Ninja Turtles are a worldwide phenomenon whose stories have appeared in various media, including three different companies’ comics, three different cartoons, and five movies. Along the way, the Turtles have amassed some downright shell-shocking stories and trivia that will make most fans spit out their pizza in surprise.

10The Shredder Was Inspired By A Cheese Grater 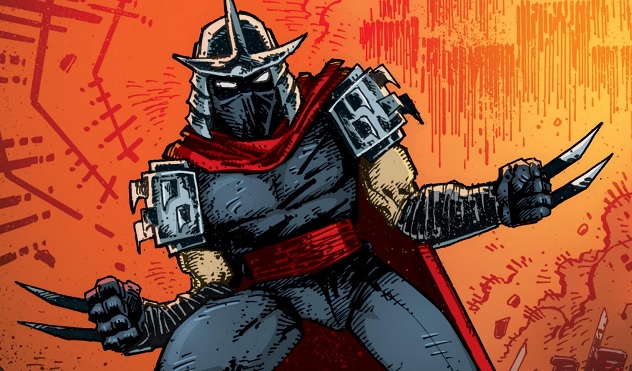 Turtle archvillain Shredder is one of those bizarre things that comic and cartoon fans are just asked to accept. Realistically, it makes no sense for someone trained in stealthy ninjitsu to run around wearing bright purple and sporting shiny metal all over his body.

However, his design was based on a real incident of someone running around with a cheese grater on his arm. That person was Ninja Turtles co-creator Kevin Eastman. One night while cleaning the dishes, Eastman ended up putting his forearm through a rectangular cheese grater and gripping its handle. He was instantly struck by the cool mental image of someone wearing multiple grater-like utensils and fighting with them, which is how Master Shredder was born and why he tries to shred the Turtles (Link 1).

If that’s not strange enough, both Eastman and fellow co-creator Peter Laird revealed in a recent interview that Shredder’s name was almost “The Grater,” but Laird mercifully suggested “The Shredder” instead.

9The Ninja Turtles Were Supposed To Be Hit Men

Many Ninja Turtles fans were introduced to the original cartoon first, which presented the Turtles as well-adjusted teenagers whom Splinter had just happened to teach the ways of the ninja. However, the Turtles originated in a much darker black-and-white comic by Mirage Studios, and they were trained for a much darker purpose: to kill Shredder.

This is exactly what they do. The original comics reveal that, as a younger man, Shredder had killed Splinter’s owner many years ago (back when he was a regular rat, but apparently still able to crib ninja moves by observing humans). Years later, the mutated rat wants revenge, so his trained assassins call the Shredder out to fight. Shredder comes along with his (very human and not robotic) army of ninjas, and the Turtles proceed to kill all of the ninjas and defeat Shredder.

They then offer Shredder the chance to regain honor by committing ritual suicide. Instead, he tries to blow the Turtles up with a bomb, which promptly blows him up after the Turtles throw him from the building. While the Turtles would eventually get lighter story lines, it’s impossible to deny their story started in a dark, dark place.

8The Ninja Turtles Started As A Parody Of Daredevil 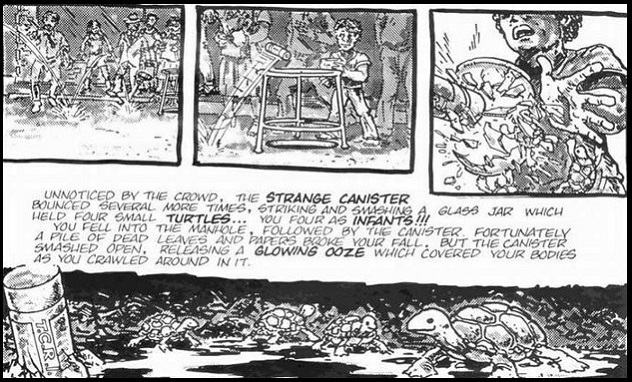 This might come as a shock, but a comic with the title Teenage Mutant Ninja Turtles was not intended to be very serious. In fact, it was an open parody of Daredevil, with a generous sprinkling of references to other comics. For instance, the original story of the ooze that mutated them—–that a young man was struck by a radioactive metal container while saving someone about to be hit by a truck—–is exactly what transformed Matt Murdoch into Daredevil. The Turtles comic merely emphasized what happened afterward. After all, the container had to land somewhere, and its mutating powers might affect someone else.

Furthermore, Master Splinter’s name is a reference to Daredevil’s own mentor, Stick. The evil Foot Clan the Turtles fight is inspired, rather unimaginatively, by Daredevil’s ninja enemy clan The Hand. Of course, Daredevil wasn’t the only comic to get parody love: the name (and nature) of the Turtles came from mashing up popular comics Teen Titans and X-Men. Hence, teenage mutants.

However, the Turtles weren’t entirely copied from elsewhere: Eastman and Laird at least came up with the “they’re turtles” part on their own. 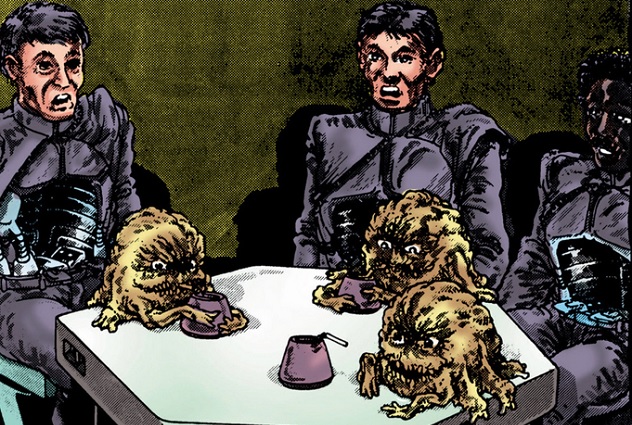 For fans of the original Ninja Turtles cartoon series, few things were as iconic (or creepy) as the sight of Krang, the malevolent living brain that walked around inside a giant robot body and helped Shredder fight the Turtles.

However, Krang was based on an alien race from the original comics known as the Utroms, and the only thing they shared with Krang was their appearance. While the cartoon Krang is a violent soldier from Dimension X who has been separated from his original body, the Utroms were a benevolent race from another planet that crashed to Earth 20 years ago. They peacefully integrated into American society inside android bodies while working non-stop on a way to teleport back to their home planet. It was during this research that they lost a canister full of an experimental substance. This was, of course, the canister that ended up mutating the Ninja Turtles in the first place.

6April O’Neil Might Have Originally Been A Black Woman 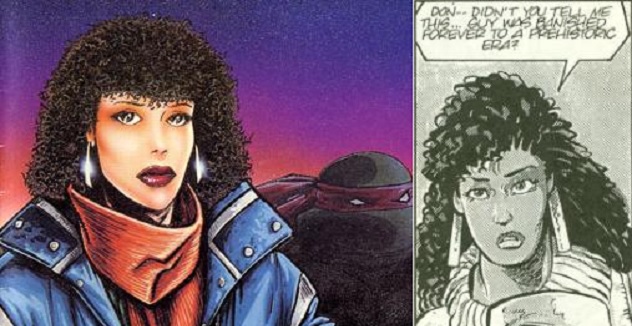 The look of April O’Neil from the original Turtles cartoon—white skin, red hair, and yellow jumpsuit—has become iconic in American culture. But she was originally drawn as a black woman (which was admittedly not always clear in the original black and white comics), but was definitively changed for the 1980’s cartoon and all subsequent media.

For a black-and-white comic, race is not always easy to identify. On top of this, different artists contributing to the original Mirage comic often had their own interpretation of April, right down to skin tone. However, an early color cover image of April seems to clearly show darker skin and black, curly hair. Also, in certain issues (most notably “Tales of the TMNT #7”), her skin is undeniably dark.

While we may never get a definitive answer from creators Eastman and Laird regarding April’s original race, the cartoon did turn other characters of color white. This included Baxter Stockman—–originally a black man, later made white for the original cartoon—–and Shredder himself, who had to be the whitest Asian ever drawn, much less ever voiced by Uncle Phil from The Fresh Prince of Bel-Air.

5The Nina Turtles Bopped Around Space In A Giant Cow Head

Archie Comics’ version of the Nina Turtles started out as a carbon copy of the original TV show, with the first seven issues just being adaptations of episodes. Eventually, though, the comic went in its own direction, and while it rarely got as weird as its Mirage Comics cousin, Archie still knew how to crank out some premium weirdness.

Case in point: “Cudley the Cowlick,” a giant flying android cow head that carried people across the universe in his mouth. Cudley was also capable of extra-dimensional travel, meaning he was able to visit both the cartoon-like Archie Comics universe and the hardcore black-and-white Mirage Comics world. This makes Cudley something of a pioneer, as the concept of different versions of the Turtles simultaneously existing in separate dimensions would be later explored in the cartoon crossover Ninja Turtles Forever. In this special, the Ninja Turtles from the 2003 cartoon visited the Ninja Turtles from the classic 1987 cartoon.

4The Ninja Turtles Fought And Killed The Devil 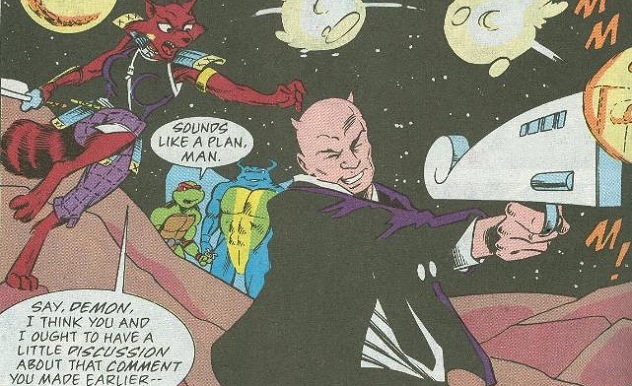 For most of their Archie Comics run, the Ninja Turtles primarily fought “street-level” bad guys, like the kind their inspiration, Daredevil, would typically fight. However, in one bizarre story line, they not only fought a horned being named Mr. Null who claimed to be the devil, but his demonic horsemen of the Apocalypse, too.

While Null was first portrayed as a stereotypical evil businessman who was dumping toxic materials into the ocean, he’s later revealed as the man who sold the world, to an alien named Maligna. As part of the deal, Null is expected to eliminate the human race. This is where his demonic henchmen come in, with Null himself later claiming to be the Devil.

Both Null and Maligna were eventually killed by the unlikely villain-turned-Turtle Slash, but not before Null could enact one of the most horrifying scenes in Archie Comics history: having some of his killer cyborgs brutally murder the Mighty Mutanimals. This ended up being the nasty culmination of a failed struggle to bring a Mutanimals cartoon to life that would have featured Null’s boss Maligna as an ongoing villain.

3There Was Almost A Sequel To The Third Ninja Turtles Movie 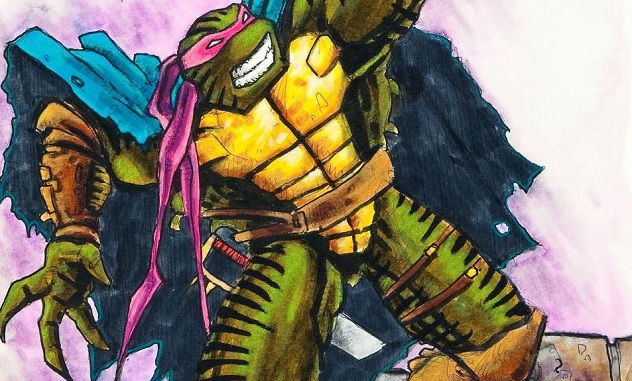 Some Turtles fans—usually fans of the original Mirage comics—bemoan the goofy tone that the second and third movies set, citing a departure from the grittier tone of the comics. That gritty tone was also one the first movie at least partially emulated. Ninja Turtles 4 was intended to be a return to form. It would be a less kid-friendly movie, complete with a badass new turtle named Kirby (pictured). Kirby had both claws and a tattered cape, lest anyone doubt the street cred of his ’90s comic book aesthetic.

Of course, this sounds downright normal compared to the planned redesign of Shredder, where he looked like he had joined a KISS tribute band. We also would’ve gotten April O’Neil in a skintight, nipple-bearing outfit worthy of Kevin Eastman’s former wife, Penthouse Pet Julie Strain. 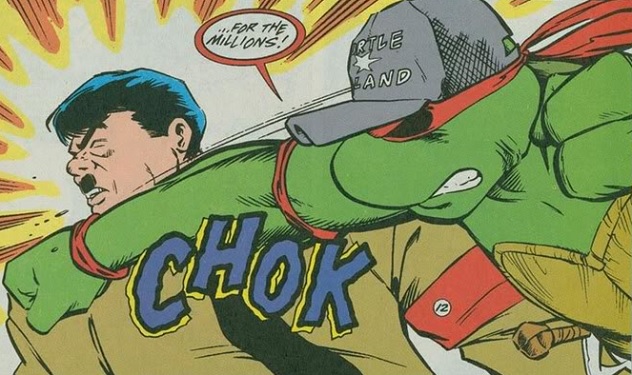 As mentioned above, when Archie’s Ninja Turtles comic decided to get weird, it never did it in half measures. One memorable story line involved the Ninja Turtles of the future, complete with Raphael sporting an eye patch.

No future story line is complete without time travel either, and so here we have Hitler’s brain building itself a robotic body and going back in time to join up with his physical self. It’s pretty straightforward time travel logic: If one Hitler almost took over the world, then two Hitlers—one of them sporting oodles of futuristic knowledge—should definitely be able to succeed.

Unfortunately, the brain’s protective glass shatters, leading to a memorable scene of Future Raphael punching out flesh-and-blood Hitler when he goes to retrieve his own brain. He later recovers and confronts the Turtles. Not to be outdone by Raphael, Leonardo claims they are demons who already possess Hitler’s soul and have now come to claim his brain. This leads to Hitler shooting himself in the head to protect his mind, and whether this represents a wacky new timeline or is meant to explain why Hitler committed suicide in real life is left to the reader. 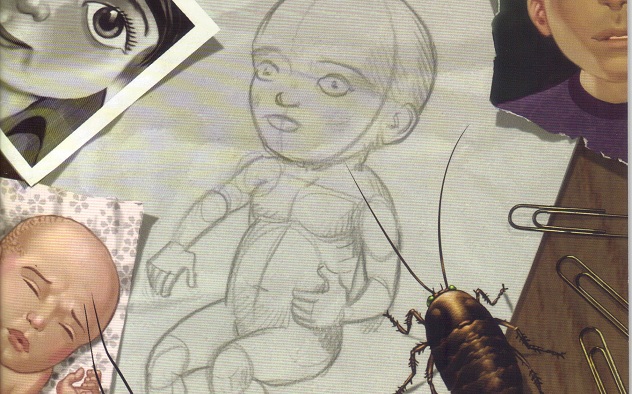 While the Archie Ninja Turtles comics made some admirable trips into weird territory, the original Mirage Comics were hard to top in terms of purely strange stories. One of them involved a young artist named Kirby (this time named after comics legend Jack Kirby) who, thanks to a magical crystal, could bring anything he drew to life. Donatello has a fun adventure rescuing a world where Kirby’s drawings are attacking people, and it seemed like that was the end of the story.

However, it turns out that April O’Neil’s father once had that same crystal when he drew a sketch many years ago—a sketch of the daughter he would like to have. When April finds out about all of this (through time travel naturally), it sends her to Alaska on a bit of an existential crisis, where she ponders the philosophical implications of not being a real person, but rather an ink drawing magically given life.