The apocalypse will bring about ultimate devastation, including extreme weather, violence, drought, floods, famine, and overall turmoil. While most of us dread these events, others see disasters as an opportunity to make some cash. The greater the destruction—or just the greater the fear of it—the more the following industries thrive. 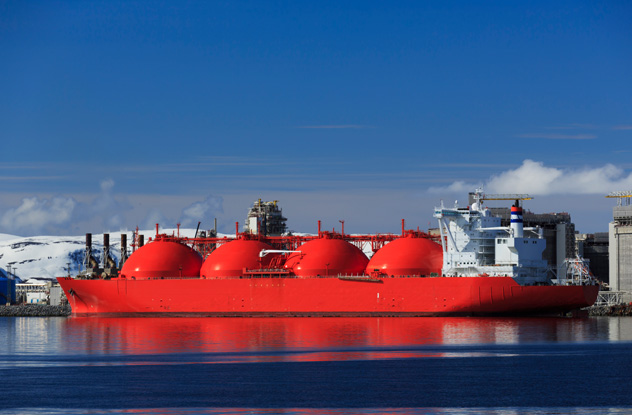 Summer ice over the Arctic has plummeted in mass by 40 percent over the last decades. Most of us are worried how this will affect the climate, sea levels, and polar bears, but many drillers are chomping at the bit waiting for the ice to melt so they can get access to underground oil.

The US Geological Survey estimates that the Arctic holds 47 trillion cubic meters (1,670 trillion cubic ft) of natural gas and 13 percent of Earth’s undiscovered crude oil, the equivalent of 90 billion barrels. Previously, thick sheets of ice made this oil inaccessible, but as the ice melts, oil rigs are moving in.

Russia, the US, Norway, Greenland, and Canada are jockeying to gain control, or reassert control, over potential oil wells and the newly exposed shipping lanes that form as the ice recedes. In 2007, the Russians even placed a titanium Russian flag at the base of the North Pole from a submarine, and they reopened a Soviet-era military base in the region that had been abandoned for decades.

In August 2014, ExxonMobil and the Russian-owned drillers OAO Rosneft joined forces to drill a $700 million exploratory well in the Arctic Ocean. This alliance was made despite major environmental protests and, more bafflingly, in the face of European Union and US sanctions against Russia. 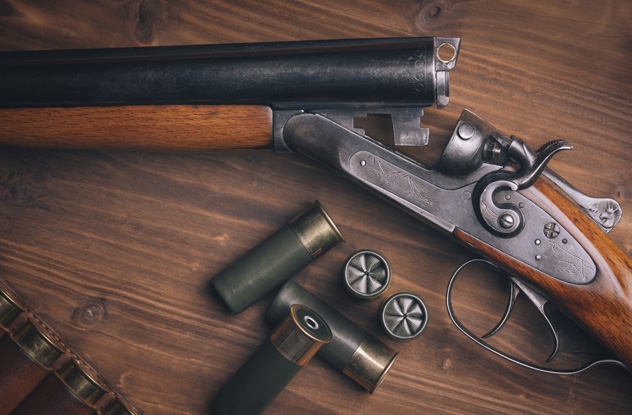 As any prepper will attest, the one thing every survivalist needs during the apocalypse is a gun. When lawlessness reigns, weaponry will be the only way to protect oneself against marauders, roaming gangs, and other ne’er-do-wells. A gun also makes hunting and living off the land a whole lot easier. Consequently, as paranoia about an eventual catastrophe grows, so too do firearm sales.

As of 2013, gun sales were at an all-time high in the US, and over 21 million gun applications went through the National Instant Criminal Background Check System. The gun industry is undoubtedly thrilled to be thought of as the one form of security in an uncertain future. Many gun shops are feeding into the fear, urging citizens to buy a gun now before it’s “too late.”

The hoarding of firearms has only gotten worse with talks of stricter gun laws. Some folks have even amassed huge, SWAT-like arsenals, complete with automatic weapons and bulletproof vests. It seems that if the end-of-the-world-as-we-know-it ever does happen, those with the best arms will rule the day. 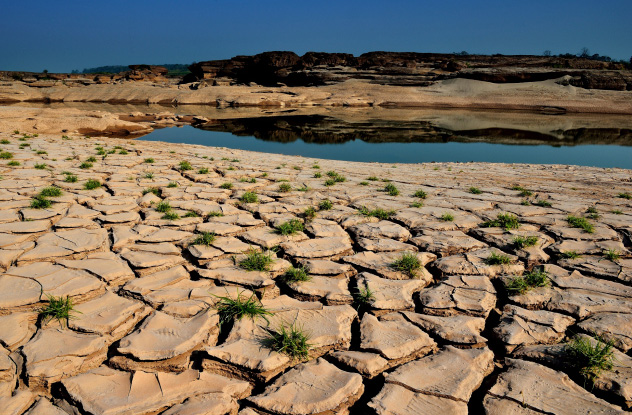 Several areas across the globe are already experiencing major droughts, and this is expected to get worse as climate change disrupts weather patterns. While investors could spend their money on technologies that might stop climate change and stave off cataclysmic drought, it seems there’s more money to be made if water continues to evaporate.

Investors are currently buying up water rights throughout the world—and, in some cases, sitting on these rights while they wait for droughts to raise the demand for their product. Not only are big businesses like New York’s Water Asset Management securing water rights, they’re also investing in water treatment facilities, effectively cornering the market on fresh, drinkable water. According to Water Asset Management’s COO, “Not enough people are thinking of water as an asset.” Climate change is a “driver” for their business.

Fresh water is the ultimate asset, as will be glaringly apparent if its availability continues to diminish. According to the United Nations, the consumption of fresh water has tripled over the last 50 years, and its demand is expected to skyrocket over the next decades if the global population approaches 10 billion. Although the expected growth in demand and decrease in supply could spell bad news for most of us, water investors stand to make a pretty penny before facing Armageddon.

Greenland has long been buried under hundreds of meters of permafrost, but as the polar ice caps slowly melt, that picture is beginning to change. Land that was unworkable is now thawing out, and gold, copper, and uranium miners are scrambling to stake their claims in this virgin mining territory.

This could mean a whole new way of life for native residents, as the changing landscape could threaten their traditional hunting practices. Also, with the influx of foreigners into a land with a population of just 56,000, Greenlanders could end up being the minority in their own country. London Mining, for instance, is expected to import thousands of Chinese workers into Greenland within the next five years.

On the flip side, opening up mineral mining could be an extremely lucrative move for Greenland, providing it with the funds needed to gain total independence from Denmark. Still, mining uranium is controversial because of potential health risks, and because it provides fuel for not just power plants but nuclear weapons. So, if climate change and exploiting the environment doesn’t bring about the apocalypse, then harvesting more uranium in Greenland might give us just what we need to completely blow up the world.

Of course it’s always a good idea to be prepared, but so-called preppers think the end of times is right around the corner, and they intend on surviving no matter what. Preppers are growing in number, and plenty of businesses are willing to feed into these folks’ fears and sell them the supplies needed to outlive everyone else.

The doom boom has gotten so big that there are now prepper conventions where survivalists gather to learn about, sell, and buy products. For instance, at large conventions like Tennessee’s Mountain Prepper Home, Gun & Outdoor Expo or Arizona’s Self Reliance Expo, rows and rows of vendors offer patrons tactical vests, survival shelters, and everything in between. 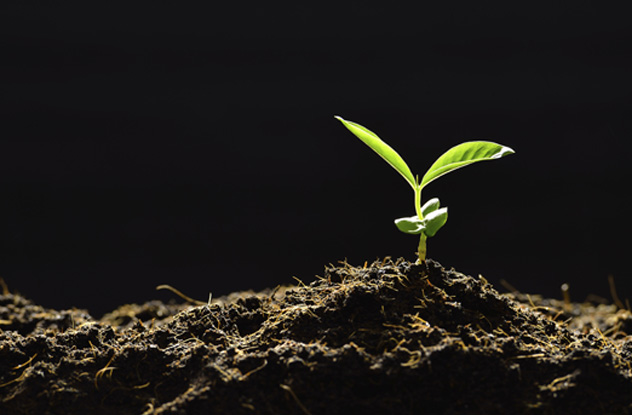 Climate-ready seeds prepare us for the day when traditional seeds can no longer grow in the extreme conditions caused by climate change. It’s smart to create seeds that can produce even in the worst weather, and the companies creating these resilient seeds are aiming for huge profits.

Over 2,000 patents exist for genetically engineered plants with high tolerances to heat, cold, salinity, drought, and increased ultraviolet radiation. Six agribusinesses (DuPont, BASF, Monsanto, Syngenta, Bayer, and Dow) own the rights to these patents—and they’re not sharing their technology. It is illegal for farmers to harvest seeds from patented GMO crops, which means they must buy new seeds every year and are forever at the mercy of these agribusinesses.

If climate-ready plants are the only ones capable of growing in apocalyptic conditions, these six companies could potentially control the entire world’s food supply.

A movement of people intend to endure the collapse of society in the “American Redoubt“—a rural area spanning across Montana, Idaho, Wyoming, eastern Washington, and Oregon. The plan is for like-minded, God-fearing people to band together and protect themselves and the region from unprepared pillagers.

The movement’s grown to such an extent that realtors now specialize in property in the American Redoubt and other places suitable for self-sufficient living. Businesses like Revolutionary Realty and Survival Realty advertise “defensible hillside locations” invisible from public roads.

For those who want the ultimate survival compound, companies sell underground bunkers that are supposedly EMP-proof. These subterranean fortresses don’t come cheap. Even a basic, underground steel tube is $72,000. 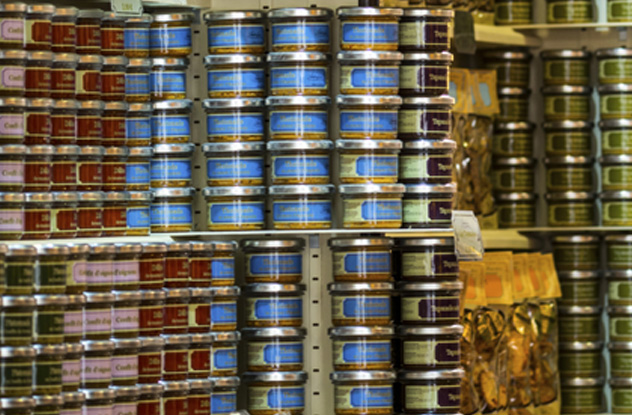 Few would dispute the merit of a moderate supply of stored food in case of temporary emergencies, but how about several years’ worth of nonperishable foods? You’d only need that if society really did collapse—in which case it seems unlikely that any one person or family could defend their food against confiscation by thieves or de facto governments.

Despite massive food storage being a bit excessive and possibly pointless, growth in this industry is surging. Stockpiling food has become so mainstream that those worried about the end of days only need to stop by their local Costco and hand over $3,500 to order a 32,000-serving, one-year supply of freeze-dried food. Smaller food storage companies, meanwhile, report revenue increases of 900 percent since 2009. 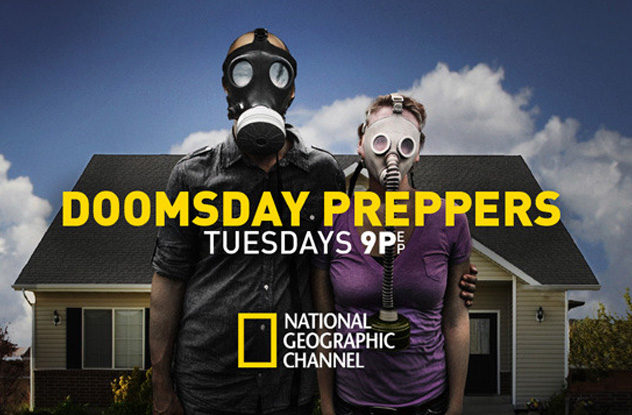 If society collapses, we’re pretty confident that the entertainment industry is going down with it. Until then, however, the industry’s profiting big from the fear that the end of the world is inevitable. Highly popular TV shows like The Walking Dead leave us all wondering if we have what it takes to live after society crumbles. Then there are the growing number of “ruined Earth” movies, like Elysium, After Earth, and Oblivion (all from 2013), and let’s not forget video games like Fallout and The Last of Us.

Doom and gloom is a running theme in pop culture, and our obsession with it is earning those in the entertainment industry hundreds of millions of dollars per year. It’s hard to tell if people’s interests are driving this trend or if entertainment is making us more preoccupied with the end of times. Either way, it seems people can’t get enough of this stuff.

Doomsday Preppers is the most-watched show in the history of the National Geographic Channel. And if watching the show doesn’t evoke enough paranoia, viewers can go its website to get their “prepper score,” learning how long they’d survive after a global cataclysm. The site’s commenters compare scores, committing to stock up on more water, MREs, or whatever else they’re lacking. 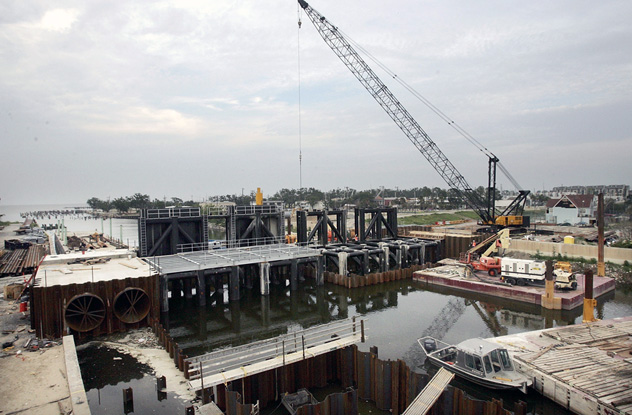 When natural or man-made disasters strike, disaster relief contractors see dollar signs instead of misfortune. Their cleanup and rebuilding services are needed, and not all of the companies are money-grabbers, but things get a little fishy when we learn the government repeatedly grants rebuilding contracts to the same mega-corporations instead of local businesses. This makes a bad situation even worse, since the big contractors largely take their profits out of town with them when the job ends, removing money from the local economy. Local contractors, on the other hand, mostly spend their earnings in the community, which helps rebuild the devastated area even further.

The same type of corruption, waste, and political cronyism that existed in rebuilding Iraq arguably occurred during the Hurricane Katrina and Haitian earthquake cleanups. Similar to war profiteering, this disaster profiteering gave companies like Ashbritt and Halliburton a combined $200 billion for reconstruction after Katrina, even when other competent contractors bid millions less for the same jobs.

Four years after the earthquake in Haiti, things there are still a wreck. The infrastructure is in shambles, useless shells of buildings are constructed, and housing projects remain unfinished while over 300,000 Haitians still live in tent camps. This fiasco came at the price of over $267 million in contracts, with less than 1 percent of those contracts going to Haitian firms. The majority went to contractors located in the Washington metropolitan area.

When you’re making that much money with so little accountability and have pull with the government, every apocalyptic tornado, hurricane, or earthquake starts to look like good news.