An octopus is called an octopus because it has eight tentacles. But when it has six tentacles, what is it called? A hexapus? A six-tentacled octopus? What do we call a goat with eight legs and both male and female organs? Or a three-headed frog?

Henry, an octopus at Blackpool Sealife—a British Aquarium—has six tentacles. He was caught off the coast of Wales and was transferred to a local zoo where he was picked up along with seven other octopuses by Blackpool Sealife. His mutation was only discovered when he attached himself to his glass tank in the aquarium. Octopuses are capable of regrowing their tentacles if they ever get cut off, but Henry did not have any space in between his tentacles to allow more to regrow, so the possibility of his tentacles having been cut off is ruled out.

Workers at Blackpool Sealife searched the Internet and spoke to several other aquariums, but none had any record of a six-tentacled octopus, making Henry the first hexapus to be documented. He is not a new species but a product of genetic mutation. Technically, he is known as a lesser octopus. Though the name “Henry” was chosen because it alliterates with hexapus, there are rumors that he was named after King Henry VIII, who married six wives even though he could have married eight. 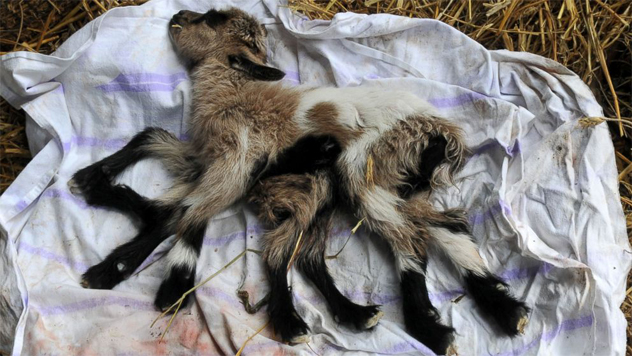 When Zoran Poparic, a farmer in Kutjeva, Croatia, saw one of the kids his goat Sarka had given birth to, he had to call a neighbor to help confirm that he wasn’t going crazy. The kid had eight legs and both male and female organs. Local veterinarians believe that the goat, named Octogoat, absorbed its undeveloped twin while still in the womb. Octogoat was born with two other kids which were normal. Its mother, which Zoran had owned for four years, had also given birth to normal triplets on four different occasions. Even with its eight legs, Octogoat did not have the strength to stand and couldn’t walk, proving that eight legs aren’t always better than four.

It was believed that Octogoat wouldn’t survive the first week after birth and, even if it did, it’s unlikely to live for more than two or three years. Zoran said that he would make Octogoat his pet if it survived. The goat’s current state is unknown.

At birth, Faith suffered from a brain defect which didn’t allow for the full development of her front legs. She couldn’t walk and had been rejected by her mother—a homeless dog which had tried to kill her. She was found by 17-year-old Reuben Stringfellow, who gave her to his mother. Her two front legs later began to weaken and had to be amputated.

Left with only two hind legs, Faith was taught how to stand, walk, hop, and run. Today, Faith walks on her hind legs just like a human being. She has met with several celebrities and has even appeared on The Oprah Show. She has visited several military bases and hospitals where she serves as a form of encouragement for injured soldiers and veterans. She has even been made an honorary sergeant in the US Army and was considered for a role in the fourth Harry Potter movie, The Goblet of Fire.

7‘We,’ The Two-Headed Albino Rat Snake 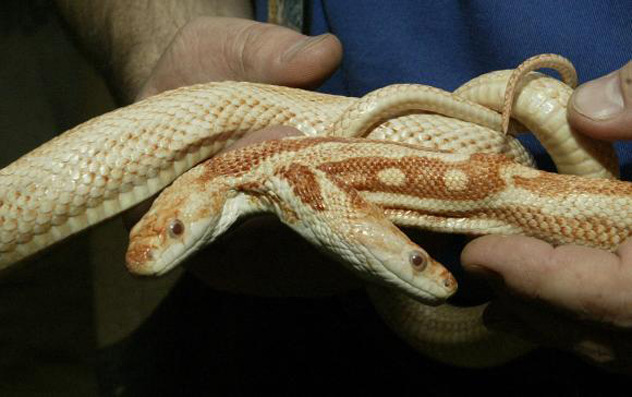 Black rat snakes are usually all black except for their chins, which are white. But one black rat snake called “We” isn’t black—it’s an albino. It also has two heads and both male and female organs. We was purchased by World Aquarium in St. Louis from its owner for $15,000 when it was just a few weeks old, back in 1999. We was visited by more than a million people over the years before its death at the age of eight.

The two-headed snake would often try to move in two different directions at the same time. World Aquarium also tried breeding it with another two-headed snake but was unsuccessful. The snake hit international fame in 2006 when World Aquarium tried auctioning it for $150,000. The auction was unsuccessful, but We was adopted by Nutra Pharma, a biotechnology company which is into the production of drugs for HIV and multiple sclerosis.

Two-headed snakes generally have a very low survival rate in the wild. The two heads are known to fight each other for food and, in some cases, will attempt to eat each other. Only one two-headed black snake is known to have lived for 20 years. 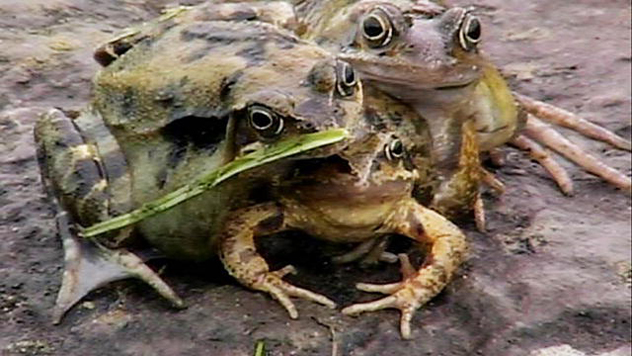 While mutant frogs are not totally unheard of, one with three heads is still incredibly rare. A mutant frog with three heads and six legs was found in the garden of Green Umbrella Nursery in the UK in 2004. The discovery was made by a student who had just been dropped at the nursery on a Thursday morning. The students at the nursery initially thought it was three frogs cuddling with each other, but were surprised when it turned out to be one frog.

School staff captured the frog and put it in a tank. By Friday morning, the frog was discovered to have escaped. Froggy’s eyes and legs seemed to function normally, but it is unknown whether its three mouths were fully functional. A professor of biology at the Open University said that although mutant frogs have been reported for about 200 years, one with three heads and six legs is completely unheard of. The mutation could be due to parasites, pollution, or genetic mutation. Some people believe that the mutation is an aftereffect of the decommissioned Hinkley nuclear power station, which is 19 kilometers (12 mi) away from Green Umbrella Nursery.

https://www.youtube.com/watch?v=8wRDHx0zR_s
Squittens—from the words “squirrel” and “kitten”—were once thought to be the product of a squirrel and a cat. This is because they have short front paws and usually have to stand on their hind legs like squirrels. In reality, they’re cats who are affected by a mutation called radial hypoplasia, or RH, which stops their front paws from becoming fully developed. In mild cases of RH, the cats still make use of the front paws to hop like rabbits. In moderate cases, they hunt with their hind legs and may even use their tail to balance, just like kangaroos. In severe cases of RH, they move entirely with their hind legs and look like squirrels when standing upright. They are also sometimes called dinosaur cats or kangaroo cats.

Squittens encounter problems with climbing, particularly when coming out of trees. They also have problems when descending from stairs, and some have even been observed descending backwards. One squitten called Kanga was born along with three other normal kittens. She also suffers from megaesophagus, which requires her to eat a special diet while standing upright because she has difficulty swallowing. Another is Petal, who lives with her adopted owner in New Yorkshire, England, along with another squitten named Honey. 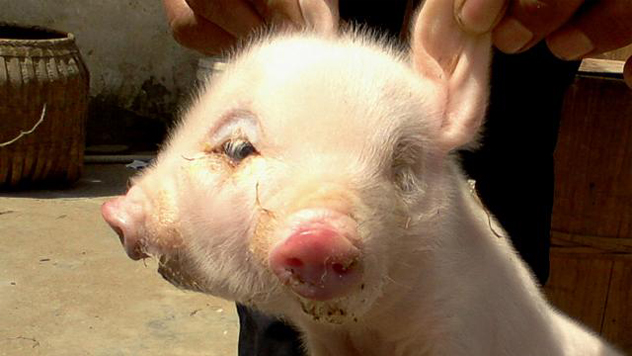 A pig called Rudy has two heads, two snouts, two ears, and three eyes. The middle eye—which is where the two heads meet—is blind. It was purchased from its owner for $5,000 by animal rescue group Pigs Without Partners, who renamed it Ditto. Only one of Ditto’s snouts was functional, and it had to wear a little helmet in case it fell over.

Its whole life, Ditto had problems walking and had to use a special walker to get around. It had only begun learning how to use its two front legs when it died in 1998, just two months after getting to Pigs Without Partners. Before its death, it had become unstable and had a habit of falling on its left side. Its face was preserved to help research facial deformities in children. A pig with a similar condition was born in Jiujiang, China in 2003. 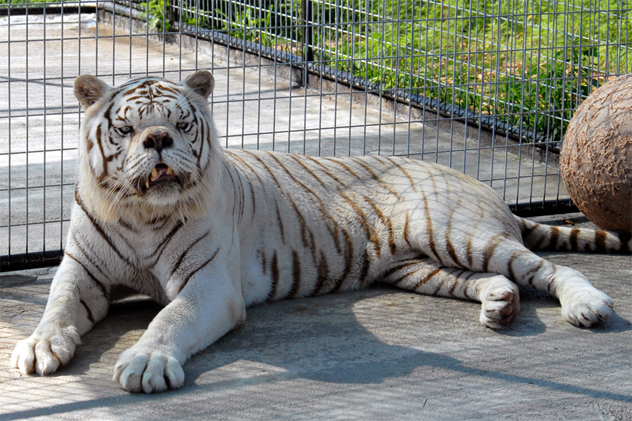 Kenny was a white tiger who was rescued along with his brother, Willie—a normal, orange-coated tiger—by Turpentine Creek Wildlife Reserve in Arkansas in 2000. Kenny was mentally disabled and had a deformed face which prevented him from shutting his mouth properly. Willie, on the other hand, was cross-eyed. Kenny’s and Willie’s parents are siblings who were made to mate by a breeder who hoped to get a white tiger. The breeder later gave up on the two brothers after he encountered difficulties selling them due to their deformities.

White tigers don’t exist naturally. The only way to produce them is by breeding closely related tigers through generations until the right mutation occurs. Most are born with health problems and physical deformities. The gene that causes their coats to become white also causes the optic nerve to become connected to the wrong side of the brain, making all white tigers cross-eyed. They also suffer from cleft palates, club feet, immune deficiency, and deformities in their spines and organs. In fact, most white tigers are stillborn, and those who aren’t typically die early. Kenny died of cancer in 2008. 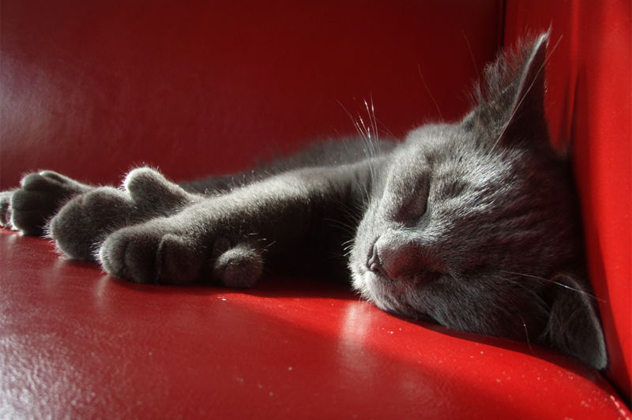 Polydactylism is when an animal has more than the normal number of toes. It is most common in cats, which normally have five toes in each of their front paws and four at the back. Polydactyl cats, however, have more than that. Jake, a male tabby cat from Canada, is recognized as the cat with the most toes. He has a whopping 28 toes—seven on each foot. Polydactylism, which means “many fingered,” is more common among cats in England, Wales, Eastern US, and Canada than anywhere else in the world. They were popularized by famed writer Ernest Hemingway, and are sometimes called “Hemingway cats.” They are also sometimes called “snowshoe paws” or “pancake feet” because the extra toes make them appear to have big feet.

As many as 30 out of the 60 cats currently living in Hemingway’s estate are polydactyl. President Theodore Roosevelt also had one called Slippers. Unlike many other mutations, polydactylism is an advantage. People generally love the look of polydactyl cats, and the cats have been known to use their extra toes to open windows and latches.

1‘Frank And Louie,’ The Two-Faced Cat 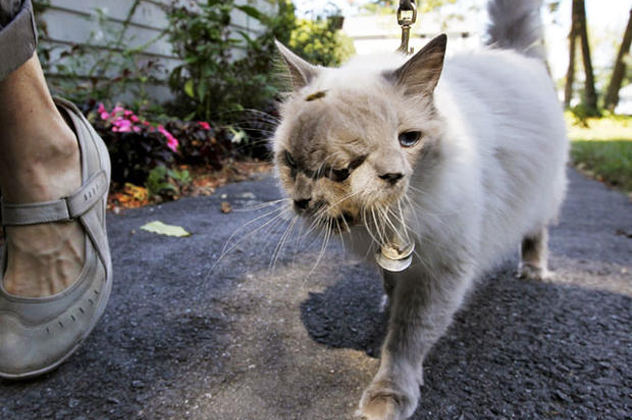 Frank and Louie is the name of a cat with one head, two faces, and three eyes. Their mutation is called diprosopia or craniofacial duplication—a very rare type of mutation that causes an animal or human being to have two faces on one head. Cats affected with this mutation are also called “Janus cats” after Janus, the Roman god of transitions, gates, and doorways, who’s depicted as having two faces. Though diprosopia has often been recorded in cats, most do not live past a couple days. Frank and Louie turned 12 years old on September 8, 2011, earning them a place in the Guinness Book of World Records as the world’s oldest Janus cats.

They are owned by Marty Stevens, a veterinary technician who adopted them after their owner brought them to the clinic where she worked to have them euthanized. The cats have one brain, and their middle eye—which is also their biggest eye—does not function. They eat with Frank’s face, since Louie’s face does not have a lower jaw and is not connected to their esophagus.

Stumpy, a four-legged duck, was born at Warrawee Duck Farm in the UK in 2007. The two extra legs couldn’t be used for walking and instead just hung behind its two main legs—although they did help it remain stable when it was younger. Stumpy was kept in a pen after birth because his owner feared that his extra limbs would get caught in shrubs. One of its extra legs did end up getting caught in a fence and had to be removed by a vet. The second one also turned black and fell off, leaving stumpy with two stumps where the extra legs had been.

Elizabeth hopes she never gets to see a three-headed frog.