An animal’s mouth can say a lot. The upturned fixed smile of a bottlenose dolphin conveys the impression that dolphins are of a friendly disposition. On the other hand, a great white shark’s mouth, visibly packed with razor-sharp teeth, does little to dispel its man-eater image.

But as well as allowing us to assign human emotions to them, such as whether they look happy or angry, an animal’s mouth, and in particular its dentition, can tell us a great deal about the animal itself. The underwater world is no different to the terrestrial side of things, and its inhabitants display a wide range of dentistry. 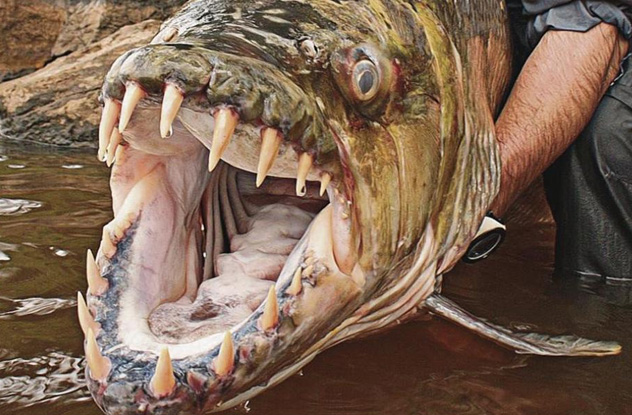 Hailing from the Congo, the goliath tigerfish is found all throughout the Congo River basin, with the exception of the Mweru-Luapula-Bangweulu system. It has one of the most impressive and fearsome grins of any creature across the animal kingdom.

A favorite in the world of sport fishing, the goliath tigerfish possess 32 razor-sharp teeth as long as an inch, all positioned at the edge of their jaws to provide maximum menace and cutting ability. While exact sizes and weights are open for debate, report of specimens exceeding 1 meter (3.3 ft) in length and reaching up to 50 kilograms (110 lb) are not uncommon.

A vicious predator, the goliath tigerfish is often associated with areas of turbulent water and increased turbidity. Using a combination of heightened sensory abilities, allowing it to detect the low-frequency vibrations emitted from other fish species, and keen eyesight, the tigerfish uses short, rapid bursts of acceleration to outmaneuver and capture its prey. 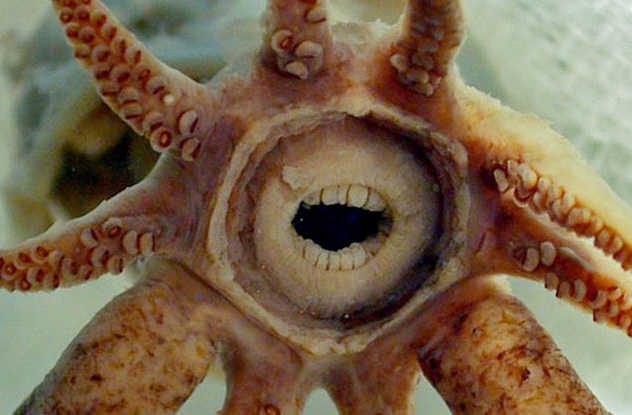 Promachoteuthis sulcus has been unofficially named the gob-faced squid, after previously being known only by its Latin name, and it’s easy to see why. It’s human-like dentition has made it a firm favorite of the Ugly Animal Preservation Society (UAPS), an organization run by biologist Simon Watt dedicated to raising awareness of some of the world’s less aesthetically pleasing animals. What appear to be teeth are actually circular, folded lips, which surround the beak of the squid when the animal isn’t feeding.

A species of decapodiform cephalopod, this elusive squid is known only from a single specimen, an immature female caught off the remote Tristan da Cunha archipelago in the southern Atlantic Ocean. The individual was netted by the German research R/V Walther Herwig at a depth of around 2,000 meters (3,500 ft). Like most other decapodiforms, the gob-faced squid is a small cephalopod, with the specimen measuring just 40 millimeters (1.5 in) in length. 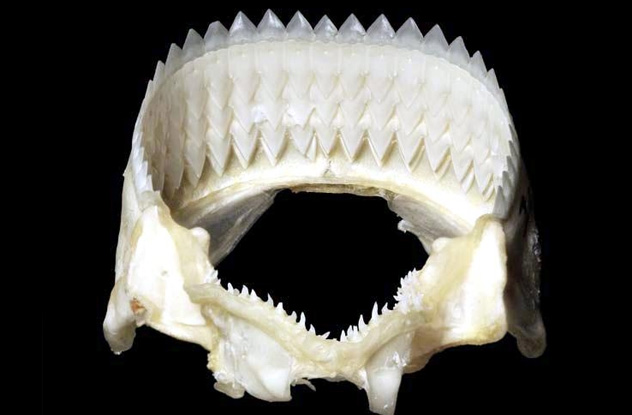 As sharks go, the deep-water cookiecutter or cigar shark isn’t the most formidable. Females measure 60 centimeters (22 in), and males are even smaller, attaining a maximum size of just 40 centimeters (16 in). This diminutive stature does not stop them taking on prey much larger than themselves. While commonly preying on crustaceans and small squid, they will tear chunks from dolphins, tuna, and other sharks, attracting them with flashing photophores before attacking.

They are termed facultative ectoparasites, which means they feed on the flesh of other species, causing harm but not death. Their dentition makes them perfectly adapted for such stealth attacks. Their teeth, smaller on the upper jaw for gripping and larger on the lower jaw for tearing, are all interconnected along the bases, so they move as one. Once they are attached to their prey using their sectorial lips, the shark spins its body, removing a plug-like chunk of flesh from their victim.

So specialized are the cookiecutter shark’s teeth that rather than losing them individually, they are shed as one and ingested to aid in maintaining calcium levels. 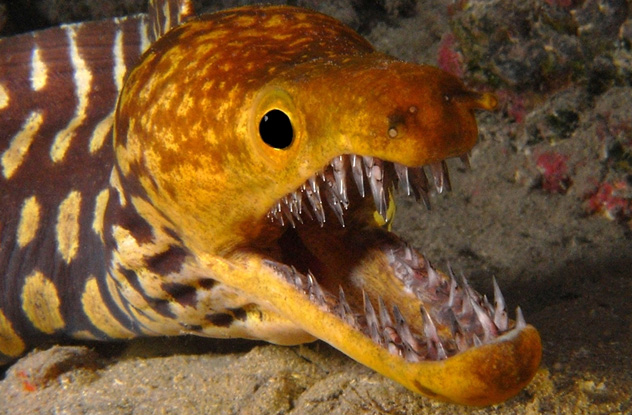 Hailing from the Mediterranean and northern Atlantic Ocean, the fangtooth moray or bird-eye conger is a species of moray eel from the Muraenidae family. This bottom-dwelling species has a very slender, elongated body, which tapers into a narrow, pointed head with a raised occipital region.

The fangtooth moray tends to be chocolate brown in color, with interspersed large, lighter patches camouflaging it among its rocky habitat. As with many moray species, often just the head region is visible to divers, with the body concealed inside rocky crevices and alcoves.

An active predator, the fangtooth moray hunts smaller species of cephalopods, as well as species of reef fish and crustaceans, snaring them with its impressive set of teeth. These clear, glass-like teeth are so large, in fact, that they are visible even when the moray’s jaws are closed. 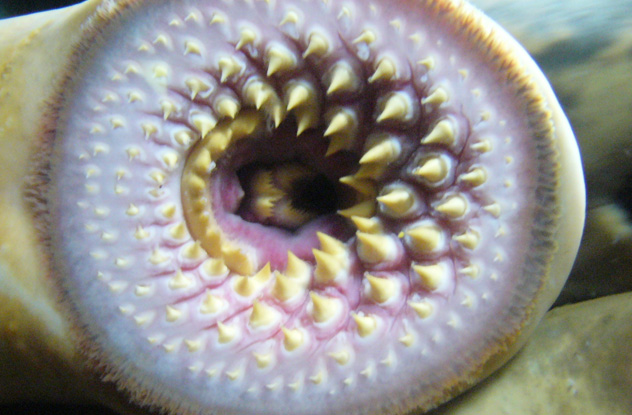 Lampreys are jawless cyclostomes and are some of the most primitive fish alive today. The sea lamprey is the largest of all the European lamprey species. It has an eel-like body, stretching over 45 centimeters (18 in), but unlike most fish species, it has a cartilaginous body and lacks bones, scales, paired fins, a lateral line, and a swim bladder.

The sea lamprey is found in estuaries and rivers across the UK, as well as the eastern USA and the Atlantic coastal reaches of Europe, as far north as Norway and down to the Mediterranean. They are anadromous, meaning that they spend the majority of their life at sea, returning to freshwater spawning grounds to breed.

While out in the ocean, the sea lamprey adopts a parasitic lifestyle and uses its suction mouth and teeth to attach to larger fish species and rasp away at its flesh using its modified tongue. This parasitic behavior made them the bane of the Great Lakes. Entering through man-built canals, they invaded and thrived, causing a collapse in local species and devastating local fisheries. 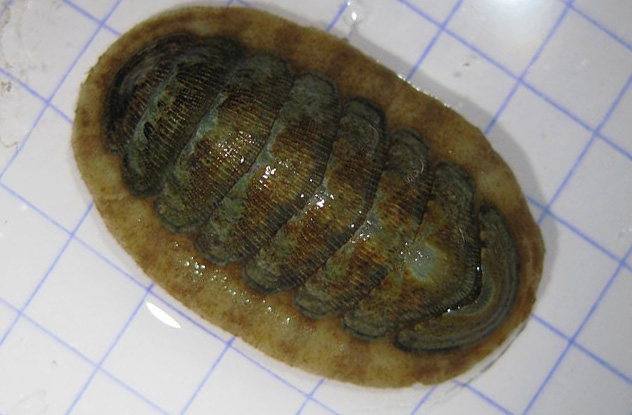 When you think of the animal with the hardest teeth in the animal kingdom, you probably envisage a predatory animal, not a species of mollusk.

Dwelling along the shorelines of the northern Atlantic, Gulf of Mexico, and eastern Pacific, these chitons are relatively small, attaining an average size of 25 millimeters (1 in). Like many other members of the Chaetopleura family, the eastern beaded chiton is found mainly throughout the littoral surf zone, clinging to rocks and shells. It feeds using its teeth to rasp algae off rocks, producing new rows of teeth on a daily basis to replace the worn ones. Older rows are pushed down the radula to the mouth region.

Unlike human teeth, made of enamel, these chitons’s teeth have magnetite tips, the hardest material made by a living organism. Using a methodology usually applied to metals, an atom probe has been used to study how these teeth develop, with the aim of one day developing a technique to synthesize tougher materials within a laboratory setting. 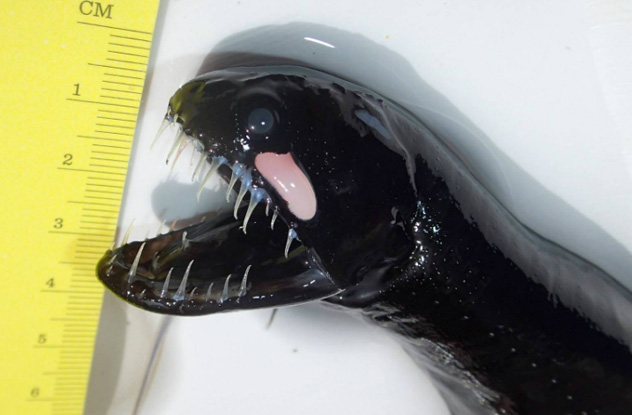 A member of the Stomiidae family, the black dragonfish is a deep-sea species occurring throughout the southern hemisphere at depths of around 2,000 meters (7,000 ft). Like many deep-sea species, black dragonfish undertake vertical migrations, swimming toward the surface at night to feed before descending back into the depths during daylight hours.

They also show an extreme case of sexual dimorphism. The female black dragonfish can reach 40 centimeters (16 in) in length. Along with many other mesopelagic predators, it can produce its own light via photophores situated along its body, under its eyes, and on the tips of its chin barbell. These can act as a lure to entice smaller prey, which are devoured using its huge barbed fangs, or to confuse its own predators. The males, on the other hand, are brown rather than black and barely reach 5 centimeters (2 in). They also lack teeth, chin barbells, and any sort of functioning gut, much like the male deep-sea anglerfish. 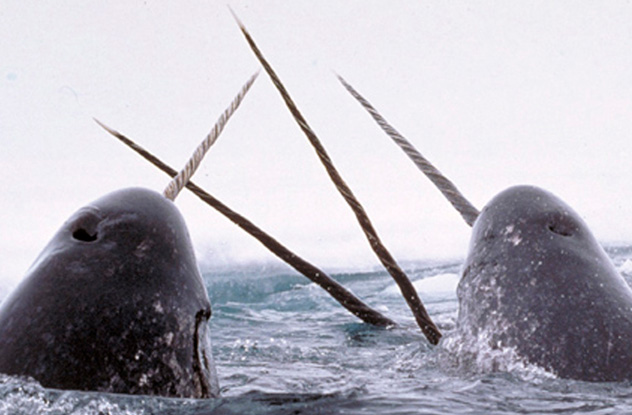 Narwhals are not whales as their name suggests but actually a species of porpoise, related to orcas, belugas, and bottlenose dolphins. Like other porpoises, they are social animals and are typically found in pods throughout the coastal waters of the Arctic Ocean, feeding on fish, shrimps, and smaller cephalopods. They measure up to 5 meters (16 ft) in length.

Their teeth, or rather their tooth, is their most impressive and recognizable feature and has seen them nicknamed the “unicorns of the sea.” Male narwhals have an enlarged, spiraled canine tooth, which can grow to nearly 3 meters (10 feet) and protrudes through their left side of their upper lip.

The exact purpose of the enlarged tooth is unclear, with speculation that it’s used for impaling prey or for jousting between males looking to attract mates. Recent research has shown that the narwhals tusk contains up to 10 million nerve endings, leading to speculation that it has a sensory purpose as well. 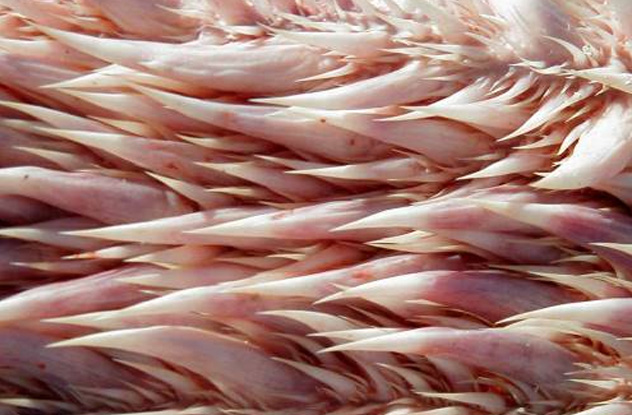 The leatherback turtle is the world’s largest living turtle and can reach over 2 meters (7 ft) in length. Unlike other sea turtles, the leatherback turtle lacks a bony shell and gets its name from the thick, leathery skin that instead covers its carapace. It feeds predominantly on jellyfish and other such soft-bodied prey items, including tunicates, cephalopods, and pyrosomes, and it spends its day following them throughout the water column. As a result, the leatherback turtles spend the majority of the daytime in deeper water, surfacing to the shallows at night as they pursue the jellyfish’s migration up the water column.

Their dentition is perfectly adapted to catching jellyfish. Rather than rows of teeth, leatherback turtles have spikes on the inside of their tomium, the sharpened edge of the beak. These are then complemented with backward-pointing spines in its throat to ensure that once a prey item is captured, it isn’t going to escape. 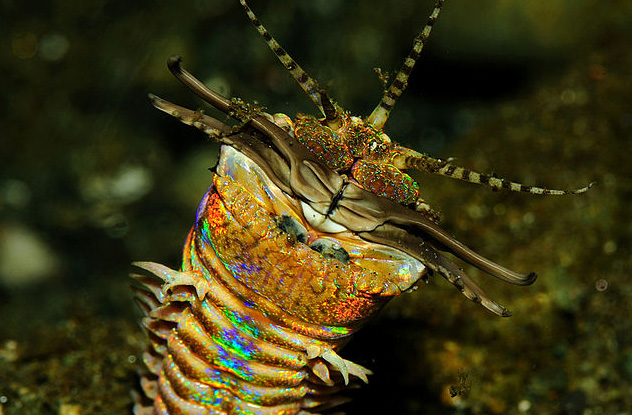 The bobbit worm is a member of a highly specialized and unique genus of polychaete worms, termed eunice worms. The exact reasoning behind the nickname “bobbit worm” is unclear, although it is a reference to the sinister actions of Lorena Bobbit, who gained infamy back in the 1990s for severing her husband’s genitals. However, the worm’s jaws open in a scissor-like gape, unlike the knife Bobbit used to inflict the injuries. Also, contrary to belief, the females do not sever the male’s penis after mating. Indeed, being broadcast spawners, bobbit worms lack external genital appendages in general.

Bobbit worms can exceed 1 meter (3 ft) in length and are found throughout much of the Caribbean Sea, the Gulf of Mexico, the northern Atlantic, and around southern parts of Australia, spending much of their day buried in the mud or sediment of the ocean floor. They are ambush predators and lie in wait for prey to disturb one of their five tentacles they leave protruding outside their burrow before attacking with lightning-fast ferocity.

Eunice worms also unintentionally enter the aquarium trade, taking up residency within live rocks destined for reef aquariums. Once established, the elusive worms grow and prey upon the coral, invertebrate, and fish inhabitants at night, leaving aquarists baffled as to the reason for their decimated stock.