In the animal kingdom, there is no shortage of odd bodily functions to keep you wondering what on Earth Mother Nature was thinking. What can we say about the workings of the animal kingdom? We have much in common with our animal friends, and yet we have many differences.

It goes without saying that these differences are largely physical. In fact, if you knew a guy who had any of the abilities below, then you could rightly assume that something went horribly wrong at birth. Yet for these creatures, their bodily workings are the norm and help them to survive in the environments they were born into. 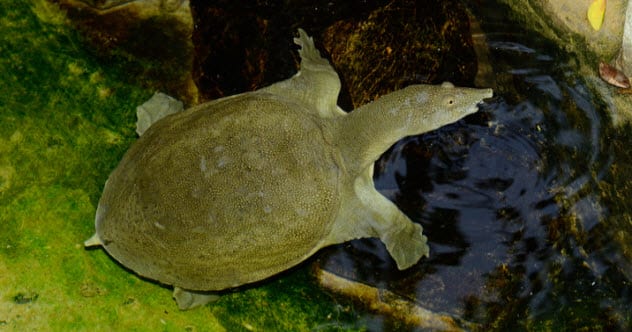 We humans have strict beliefs about where waste material should come from, but the Chinese softshell turtle cares nothing for our expectations. This creature actually urinates from its mouth without any apologies.

Chinese softshell turtles make their homes in fresh bodies of water. They excrete urea from their mouths while submerged. If they’re on land, they’ll find a puddle or other body of water to dunk their heads in and pee.

This peculiar bodily quirk doesn’t stop the Chinese softshell turtle from being in demand. It is widely traded throughout Asia to be used as food and in traditional medicine, making it a vulnerable species.[1] 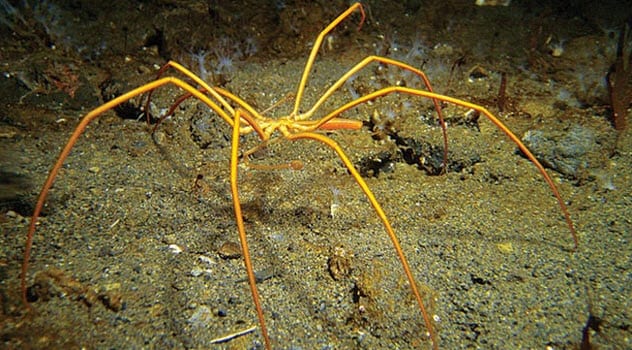 Upon seeing the spindly sea spider, you quickly realize that this creature is all legs and little else. It looks like long spider legs glued to half a toothpick. Due to its unique body composition, nature had to exercise some creativity to keep this little guy alive.

For example, a sea spider’s blood doesn’t pump primarily through its heart but through its gut. Unlike that of a human, the sea spider’s gut is spread throughout its body. In addition, these creatures don’t have a respiratory system. Instead, oxygen is drawn in and released through their legs.

The spider also relies on its legs to reproduce as this is where all its reproductive organs are located. The female grows eggs in her thighs and releases them through special pores. Then the male comes to scoop them up and carry them around after fertilizing the eggs through similar pores in his own legs.[2] 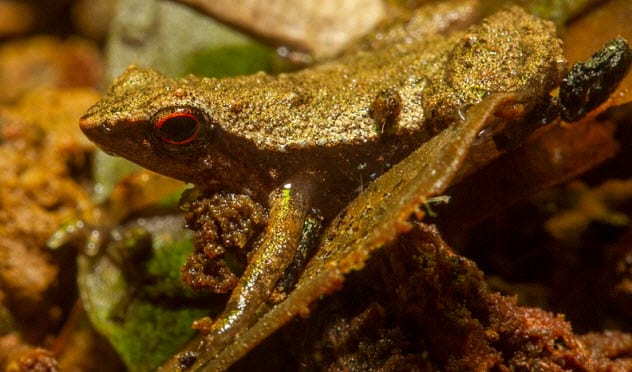 About a third of the size of a human fingernail, the teensy Gardiner’s frog has another unique feature: It can hear through its mouth. A scientific paper published in 2013 revealed that the frog detects sound waves through a cavity in its mouth. They are then transmitted to the frog’s brain.

These frogs were previously thought to be deaf because they don’t have a middle ear and thus no eardrum for sound to bounce off. The team tested this assumption by recording the sound of the frogs and then playing it back to a different group of frogs.

When the creatures responded to the recording, researchers then set to work to find out just how the frog could hear. They produced simulations of the frog’s head and found that the mouth cavity would vibrate like an eardrum at the same frequency as the frog’s call.[3]

Gardiner’s frog can only be found on the tiny island nation of Seychelles. This animal is currently listed as endangered due to the invasion of its habitat by wild fires, invasive species, and human activity. 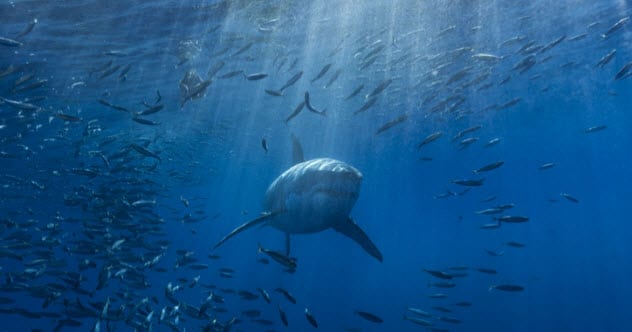 Members of the animal kingdom have plenty of abilities that we humans could only wish for. Electroreception is one such ability. This superpower allows animals to detect electrical fields. As all living things have their own electrical field, it comes in handy when catching prey or avoiding predators. Just imagine, no one could ever sneak up on you while you’re looking at questionable websites again.

It’s mostly fish and amphibians that have electroreception because it works best in water. However, sharks have the most finely tuned sense of electroreception. While underwater, these predators of the deep have been known to react to a mere millionth of a volt of electricity.

Shark’s electroreceptors, which are called ampullae of Lorenzini, are a network of jelly-filled pores on the shark’s skin. Each pore has a bulb-like structure called an ampulla. Electrical currents flow through the jelly and across the surface of the ampulla, which then sends the signals to the shark’s brain.[4] 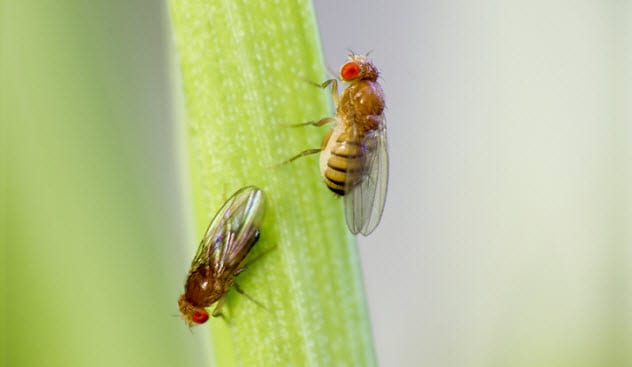 Can you imagine being able to enjoy an ice cream sundae by slathering it all over your body? Before you label that visual as weird, consider that this is basically how the humble fruit fly lives its life.

Although fruit flies don’t have subtle taste distinctions like humans (a piece of meat is no different from a potato chip, for example), their taste receptors can distinguish between sweet and bitter. These receptors are found on the bristles scattered all over their legs, their wings, their extending proboscis that they use to suck up food, and even their ovipositor (the organ they use to lay eggs).[5]

Researchers at UC Berkeley found that the fruit fly’s brain can map the location of the taste, the type of taste, and whether the food is okay to eat. In the insect kingdom, it’s common to have taste receptors on various parts of the body. Butterflies and houseflies taste with their feet, while honeybees and some species of wasps have taste receptors on their antennae.

5 The Clear-Blooded Fish Of The Deep 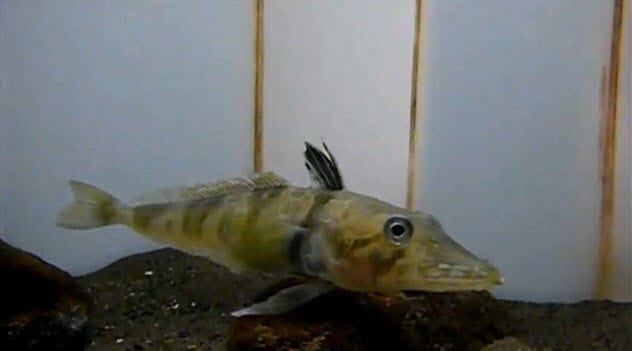 Deep in the waters of the freezing Southern Ocean lives the ocellated icefish, a creature with some handy adaptations to deal with the frigid temperatures. Their hearts, which are about five times larger than an average fish heart, keep their blood pumping at a good pace.

However, ocellated icefish don’t have any hemoglobin, the protein that gives blood its red color and carries oxygen through the bloodstream. So, their blood has no color at all. Yep, clear blood just like in that alien movie that has haunted your dreams since childhood.

As the waters of this region are so cold, the fish’s plasma can absorb oxygen directly in the absence of hemoglobin. Life always finds ways to continue on, even in the frozen depths of our southernmost ocean.[6] 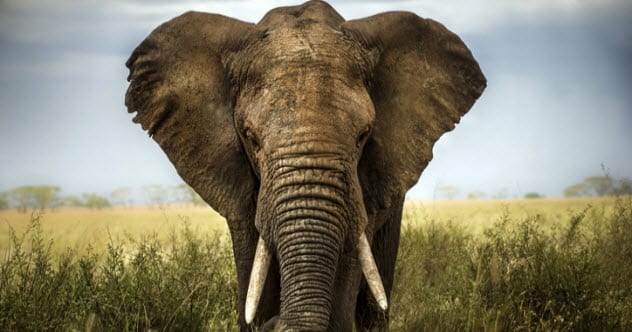 We now scale up significantly to examine the gargantuan elephant. When it comes to communication, elephants have a variety of ways to go about it. Everyone knows about their trumpeting calls. They also flap their flag-like ears to communicate, and they make a rumbling sound between 10 and 40 Hz that’s too deep to be heard by human ears. (We can’t hear anything below 20 Hz.)[7]

They pick up the sound thanks to bone conduction, specialized middle ears, and ultrasensitive toes and trunks. Elephant researchers call this feat seismic communication. Not only do they rumble to tell each other about danger and sources of food, but subtle differences in the sound also allow an elephant to tell exactly where the noise is coming from and how to respond.

3 Fish With Creepy Flashlights For Eyes 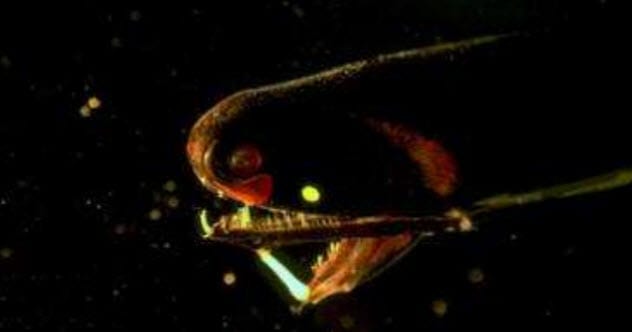 If there’s anything that the deep sea has taught us, it’s that life gets freaky in the absence of sunlight. Deep-sea fish have eyes that are adapted not to look for sunlight but for light produced by other animals.

Glow-in-the-dark fish are no strangers to the deep. In particular, the deep-sea dragonfish has red lights under its eyes. Along with the creature’s needlelike teeth, these red eye lights make it every bit as terrifying as you would imagine it to be.

Their eyes are also sensitive to the reddish-orange wavelength of light. The red eye lights give the dragonfish a unique advantage because blue light is the only visible wavelength that passes through the ocean (which is why the ocean appears blue).

As they’re the only ones who can see and emit red light, deep-sea dragonfish can low-key signal to each other and also shine their red light of death on prey that would otherwise be invisible.[8] 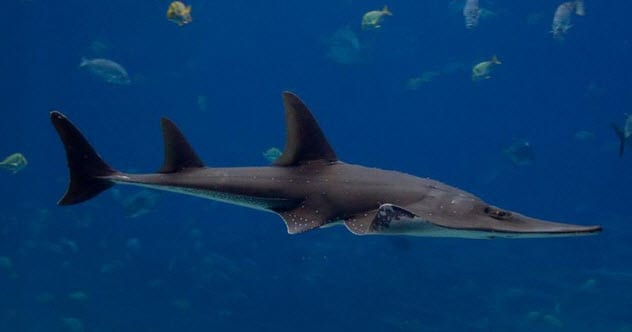 This is yet another example of a fish with crazy eyeball abilities. The giant guitarfish gets its name from its unique shape. It actually looks like an experimental cross between a manta ray and a shark.

Instead of eyelids, this fish has the ability to pull its eyes about 3.8 centimeters (1.5 in) inside its head. This built-in eye protection comes in handy because this fish hunts along sandy ocean floors for its prey.

Surprisingly enough, there are a lot of animals who have this ocular ability. For instance, frogs can also retract their eyeballs. Most mammals—including dogs, cats, and pigs—can also draw in their eyes.[9] 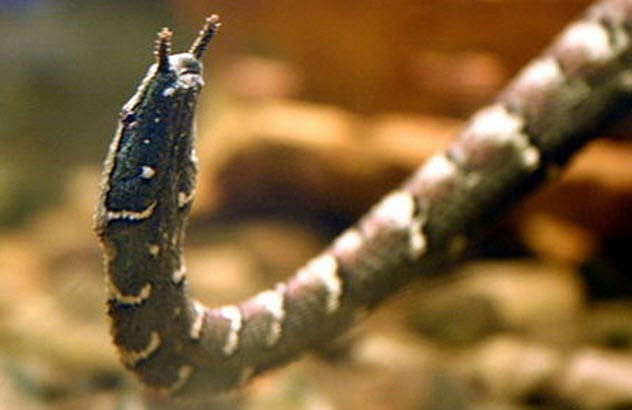 There are at least two things that snakes should never have: wings and tentacles. Fortunately, winged snakes don’t exist (at least they haven’t been discovered yet), but there is a species of snake that rebelliously developed tentacles at some point on the evolutionary ladder.

The tentacled snake (Erpeton tentaculatus) can be found in Thailand and Vietnam. These creatures live in slow-moving or stagnant bodies of water. During the dry season, the snake buries itself in mud until the rain returns.

So, what exactly does a snake do with its tentacles? Researchers found that these appendages are supersensitive receptors that can sense even the subtlest movements underwater. This greatly helps the snake to hunt for fish.[10]

Tiffany is a freelance writer from Southern California now living in Ghana, West Africa. She loves her work and is fascinated by nature, pop science, and stories of human endurance. She can most often be found reading sci-fi novels, hanging out on the beach, or indulging in something that has chocolate in it.