Some people look up. Some satellites look down. But between them, fascinating and rare events have been captured on film.

Moments range from the adorable, like a moon trying to eclipse the largest planet in the solar system to record-breaking fire and hurricane seasons battling each other. There is also the ISS hogging attention during a full eclipse and rainbow circles buzzing a helicopter.

Jupiter is known for the Great Red Spot, a massive storm larger than Earth. But a black spot? In 2019, NASA captured just that. However, this was not a new storm. It was a wacky solar eclipse.

One of Jupiter’s moons, Io, is about the size of our Moon. Io passed in between the Sun and Jupiter and had the planet been the size of Earth, it would have been a total solar eclipse. But Jupiter is the biggest planet in the solar system. Instead of a total darkening, Io only managed to cast a small black dot.

If anything, the moon’s stark shadow against Jupiter’s soft colours created a stunning photograph.

9 The Star Of Bethlehem 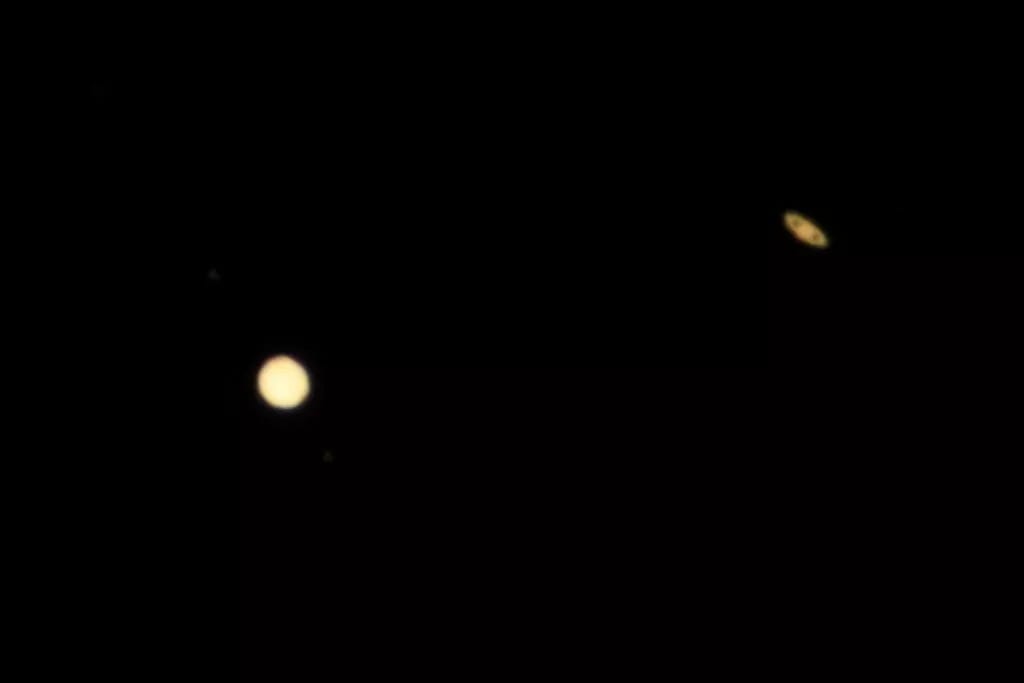 In December of 2020, a lot of sky-gazers were disappointed when thick clouds robbed them of experiencing a rare sight first-hand. The “Star of Bethlehem” was not the famous Biblical star appearing in modern times. Instead, the remarkable event involved two planets. Jupiter and Saturn lined up in such a manner that they appeared extremely close to each other and the Earth.

Luckily, there was no shortage of photographs. Among the best was captured by an amateur photographer who used a telescope and a camera. But what made this image stand apart from the pack?

Despite the fact that the photographer’s equipment was not particularly high-tech, the rings of Saturn were surprisingly clear. As a bonus, the photographer also captured four of Jupiter’s moons running in a straight line near the left bottom corner of the image. 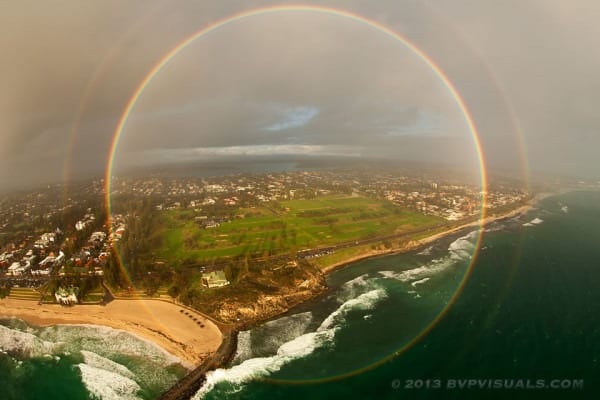 Most full-circle rainbows is a case of mistaken identity. What most people see are different phenomena such as sun halos and aeroplane glories. True rainbows appear when the Sun is at your back and you are looking towards rain. But full-circle rainbows come with an extra rule—to spot one, a person must be high up in the air. This makes them exceedingly rare.

In 2013, all the conditions came together. A helicopter was flying near the city of Perth when the craft passed in between a shower and the sunset. That was when a photographer onboard noticed the elusive sight.

The rainbow was not alone. Like most rainbows, it had a faded mirror image. In this case, the second full-circle rainbow could be seen framing the first. 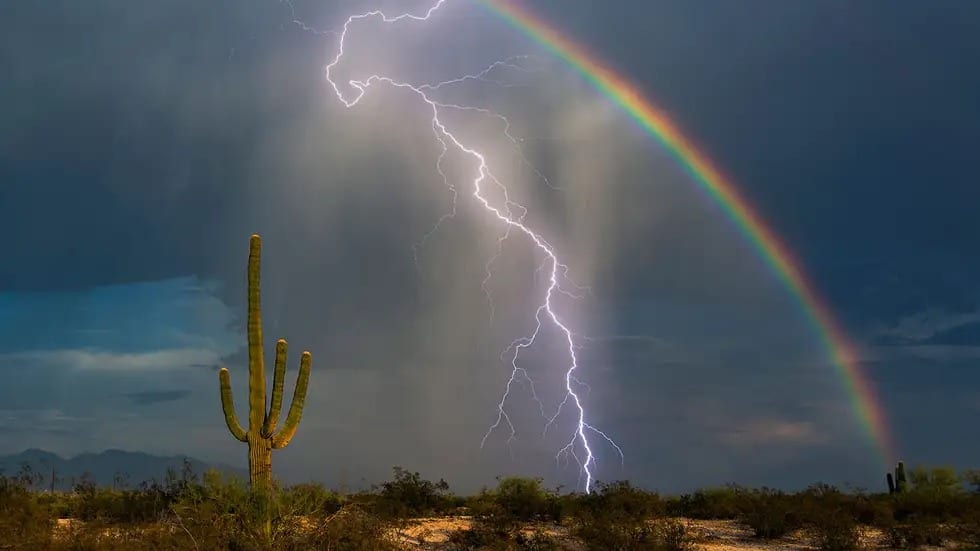 There is something even rarer than full-circle rainbows. Unfortunately, rainbow lightning does not involve multi-coloured bolts of light streaking through the sky. At first glance, the truth seems more mundane. Okay, so some guy snapped a picture of a rainbow with lightning in front of it. So what?

One has to be extremely lucky to catch both phenomena together.

The photographer also had to stand in the right place at the right time. Taken in Arizona, late in 2016, he gazed at a storm with the Sun at his back. The setting Sun’s angle scattered sunlight through the rain and a rainbow appeared. At some point, a negatively-charged cloud and the positively-charged earth zinged each other with a lightning bolt, completing a photograph that wowed the Internet.

6 The Moon’s Shadow And A Hurricane 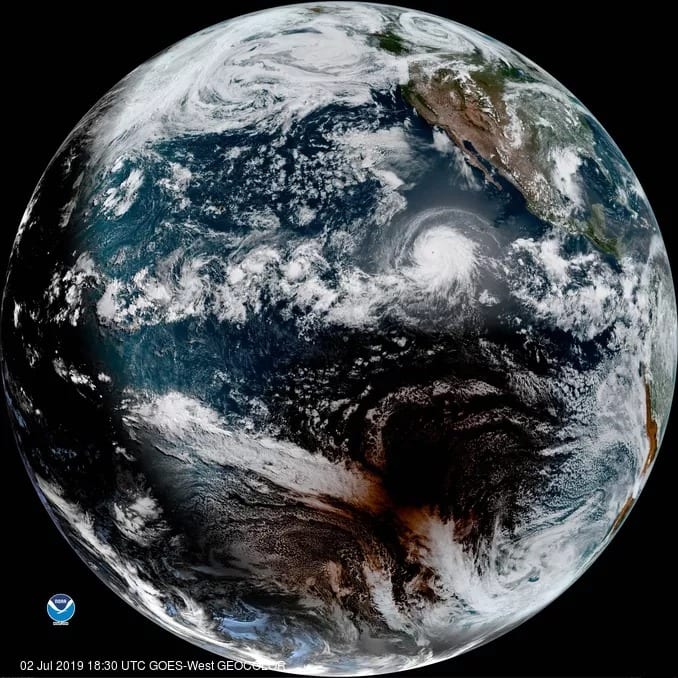 One of the best satellite images of 2019 was taken by GOES-West. The weather satellite was known for taking crisp images and in July, GOES-West trained its cameras on the Pacific Ocean. Why? Because gorgeous stuff was going down in this patch of the sea.

Hurricane Barbara was heading towards the United States. The spectacular storm was the first major hurricane of the year and could be seen churning in the northern half of the globe. But what made the image so unusual was a dark mass floating in the south. Almost directly below Barbara.

This was the shadow of the Moon, cast upon the Earth during a solar eclipse.

5 STEVE And NEOWISE (Plus Two Friends)

In July 2020, Donna Lach was standing near her farm in Manitoba, Canada. The photographer wanted to catch two celestial phenomena together—the aurora lights and the comet NEOWISE. The latter was one of astronomy’s superstars of the year. Sporting two tails, the comet could be seen by anyone with a good pair of binoculars.

Lach got more than she bargained for. Sure. The aurora lights hung like green mist in the night sky and NEOWISE also dutifully showed up. But the pair was not alone. To Lach’s delight, STEVE showed up. The initials stand for the mind-numbing phrase of Strong Thermal Emissions Velocity Enhancement. Despite the lengthy description, nobody knows what causes STEVE (which resembles purple aurora).

Lach took over 600 photographs. The trio already made the images rare but to her surprise, a fourth visitor showed up. For a split second, a meteorite entered and burnt up in the Earth’s atmosphere. It streaked along the top left corner of the image, NEOWISE curved towards the horizon on the right, while STEVE and the aurora lights hung in between them. 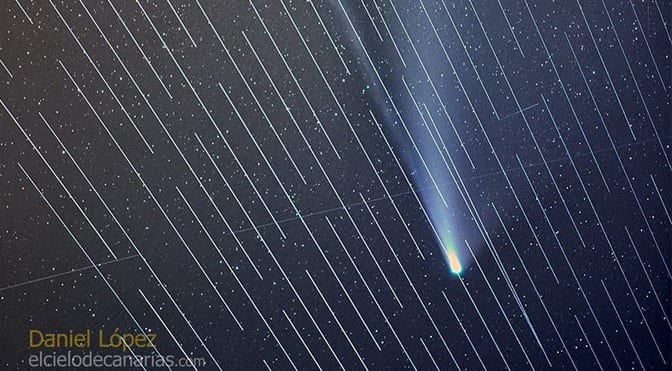 Photographers and astronomers had a special interest in the comet NEOWISE. Sure, it came incredibly close to Earth and had two tails. But something else made it incredibly special—nobody alive today will ever see the comet again. NEOWISE has such a huge orbit that the next time it swings by Earth will be 7,000 years from now.

Needless to say, astronomers were eager to get close-up shots of NEOWISE.

When astrophotographer Daniel Lopez took a time-lapse image of NEOWISE, he caught the comet looking bright-eyed and bushy-tailed. The image would have been perfect except for one thing. To his dismay, the image was streaked with white lines. It was not the result of equipment failure or shooting stars. The streaks were caused by SpaceX’s Starlink satellites passing by at the worst moment.

This photograph took most of January to create. In 2015, an observatory in the Chilean Atacama Desert used different photographs and long-exposure to catch six celestial phenomena together. True, it might not be as organic as STEVE and its three companions but the resulting picture was still spectacular.

Comet Lovejoy appeared as a green glow near the centre. A star cluster, known as the Seven Sisters and the California Nebula (a red streak of gas), were both to the right of the comet. A meteorite also entered the atmosphere on the left. Lower in the sky, there was a green haze near the horizon and this was the result of oxygen gathering in the upper atmosphere. Finally, a thick shroud of low-altitude clouds sat like a thick carpet under the green haze.

In 2020, America saw catastrophic weather. Cyclones were approaching from the east and the Gulf Coast. At the same time, the West Coast was on fire.

The wildfires destroyed a record-breaking 3.6 million acres (1.4 million hectares) of land in California. Not to be outdone, hurricane season caused devastating flooding and spawned so many storms that the government ran out of names for them.

NASA satellites captured the two seasons interacting with each other. A remarkable series of images showed how a massive blanket of smoke covered almost the entire country, travelling from west to east. At the same time, several storms could be seen near the coastline. One of them, Hurricane Paulette, was strong enough to block the smoke from reaching the Atlantic ocean. Only when Paulette perished the next day did the smoke move out to sea.

When a solar eclipse occurred in 2017, few people were aware of what Joel Kowsky was up to. The NASA photographer had arrived in Banner, Wyoming, to record the eclipse. But Kowsky was not interested in giving the world another Moon-hides-Sun picture. He knew that the International Space Station (ISS) was going to fly past the Sun at the exact moment of the eclipse.

Catching the ISS buzzing an eclipse was something nobody had ever photographed before.

But this was no easy task. The ISS is relatively small (about the size of a football field) and hurtles through space at a blinding speed of 17,500 miles per hour (28,000 km/h). To capture the speedy dot, Kowsky took images at the rate of 1,500 photographs per second.

The blitz paid off. One of the best results was a composite image that showed the ISS in different places as it moved across the Sun.