We know a lot about space, which is to say that we know very little about space. But that’s fantastic because we’re constantly having our minds blown when we find new things. Recently, we discovered the astonishing celestial phenomena below. 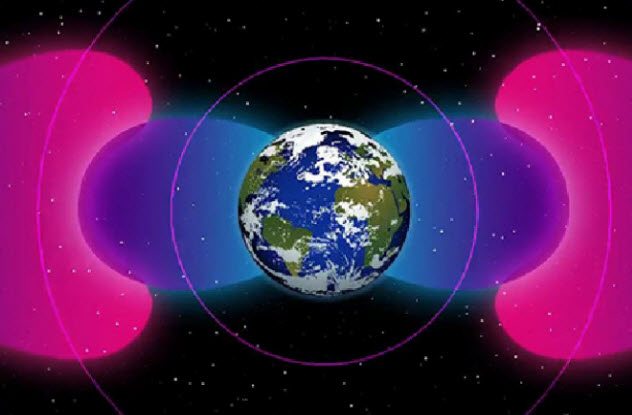 NASA researchers have found a surprising and beneficial by-product of radio transmissions: an anthropogenically created “VLF (very low frequency) bubble” around Earth that shields us from some types of radiation.

The Earth also has its all-natural Van Allen radiation belts, where Sun-spewed energetic particles are trapped within the folds of Earth’s magnetic field. But now scientists see that Earth’s accumulated electromagnetic output inadvertently created a kind of radioactive barrier that deflects some of the high-energy space particles constantly assaulting Earth.[1]

The barrier is a mix of electromagnetic gunk, including leftovers from the orbital nuclear tests of the Atomic Age. Earth has also been consistently beaming radio waves into space for over 100 years now, as well as electric “residue” from the many power grids sprawling across the globe. 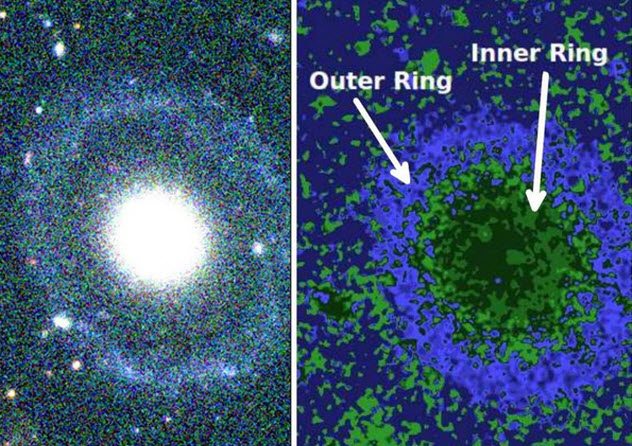 Galaxy PGC 1000714 is possibly the “most” unique ever observed. It’s a Hoag-type object with a ring around it, like Saturn, except scaled way up to galactic size. Not even 0.1 percent of galaxies are ringed, but PGC 1000714 is in a class of its own with not one but two rings.

The rings surround the core, a 5.5-billion-year-old region teeming with aging stars that glow red. Around that is a large, much younger 0.13-billion-year-old outer ring, which glows with the hotter, blue brilliance of youthful stars.[2]

When scientists looked at the galaxy across multiple wavelengths, they spotted the totally unexpected fingerprint of a second, inner ring, closer to the core in age and completely unconnected to the outer ring. Considering that the overwhelming majority of galaxies are elliptical or spiral-armed, PGC 1000714 may remain unique for a long while.

8 A Planet Hotter Than Stars 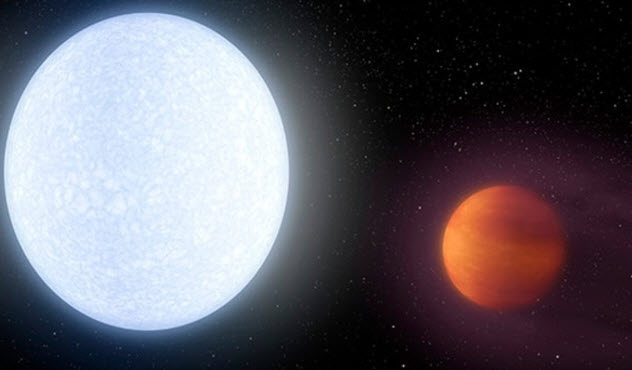 The hottest exoplanet discovered so far is hotter than a whole lot of stars. The newly described Kelt-9b is a scorching 3,777 degrees Celsius (6,830 °F), and that’s on the dark side! On the side actually facing its star, the temperatures rise to about 4,327 degrees Celsius (7,820 °F), almost as toasty as the surface of the Sun.

The star in question, Kelt-9, is an A-type star, a mere 650 light-years away in the constellation Cygnus. A-type stars are among the hottest, and this particular individual is a baby at only 300 million years old. But as it ages and expands, its bloated surface will eventually touch Kelt-9b.[3]

By then, the planet may be nothing more than a rocky cinder because the UV barrage from its parent strips away 10 million tons of material per second, forming a gleaming, streaming tail as Kelt-9b moves around its star on an odd, pole-to-pole orbit. 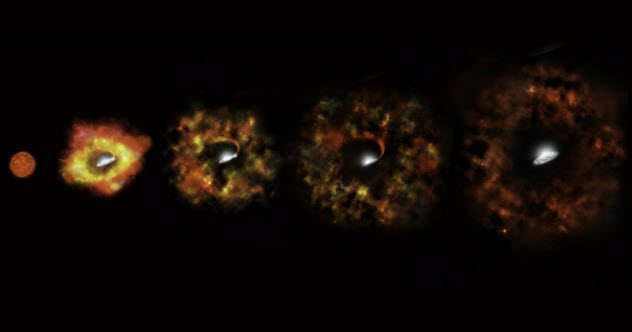 It doesn’t require a space-ripping supernova or a collision between two incredibly dense objects like neutron stars to create a black hole because, apparently, stars can collapse into black holes with a relative whimper.

Researchers thought it could happen, made it happen on computers, and now think they’ve finally seen it happen in the wild.[4] The Large Binocular Telescope survey picked out thousands of potential “failed supernovae.” Out of all these, one appears to be the real deal.

Star N6946-BH1 had just the right amount of mass for this to occur, about 25 times more than the Sun. The images show it doing exactly what researchers thought it would do—get a bit brighter (compared to other supernovae) and then vanish into darkness. 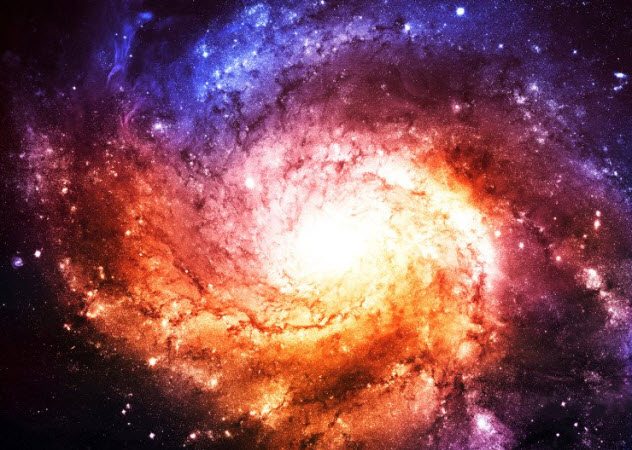 Lots of celestial bodies produce magnetic fields, but the largest ever discovered belong to gravitationally connected clusters of galaxies.

A typical cluster spans about 10 million light-years, compared to the Milky Way’s relatively slim 100,000-light-year waistline.[5] And these gravitational behemoths produce the magnetic fields to match their sheer immenseness.

The clusters are a bumper car pit of charged particles, gas clouds, stars, and dark matter, and their chaotic interactions create an electromagnetic witch’s brew. When the galaxies themselves float too close and bump together, it compresses the roiling gases, shooting arc-like “relics” that extend up to six million light-years, potentially larger than the cluster that births it. 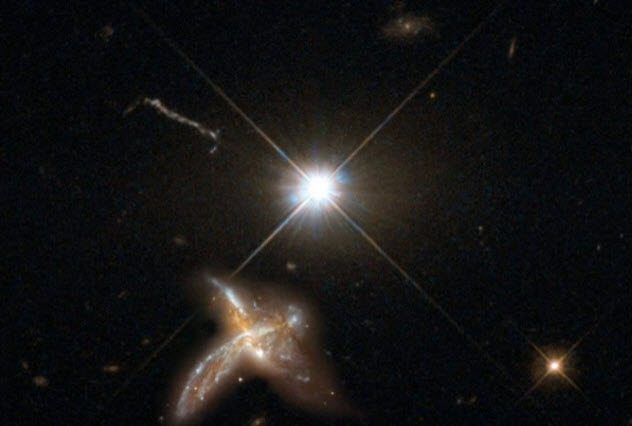 The early universe is full of mysteries, including a bunch of mysteriously chubby galaxies that shouldn’t have existed long enough to get to their observed level of fatness.

These galaxies had hundreds of billions of stars (a decent number by current standards) when the universe was only 1.5 billion years old or so.[6] Looking back even further in space-time, astronomers have found a new type of hyperactive galaxy that preempted and fed the early behemoths.

When the universe wasn’t yet a billion years old, these precursor galaxies were already pumping out an insane number of stars at a rate 100 times faster than the Milky Way. And even in the sparsely populated infant universe, researchers found evidence that the galaxies were merging to form the earliest, beefiest specimens. 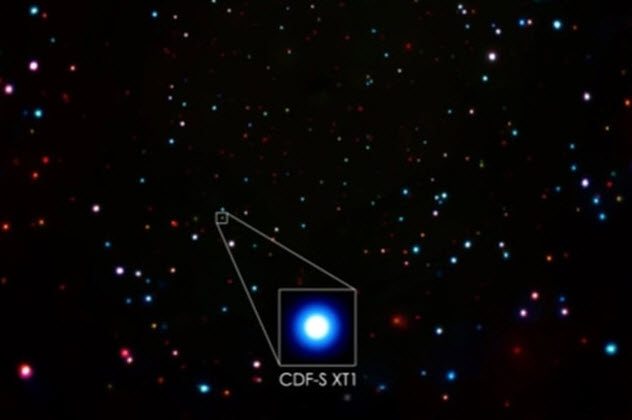 The Chandra X-ray Observatory saw something weird while peering into the early universe. Chandra observed a puzzling X-ray source, 10.7 billion light-years away. It suddenly grew 1,000 times brighter and then faded to darkness in the course of about a day.

Astronomers have discovered similarly bizarre X-ray bursts before, but this one sticks out because it’s 100,000 times more luminous in the X-ray range. Preliminary culprits include gigantic supernovae, crashing neutron stars, or possibly white dwarfs.

But the evidence doesn’t point to any of those events. The galaxy that hosted the blast is much smaller and more distant than the previously observed sources, so astronomers hope they’ve found a “completely new type of cataclysmic event.”[7]

3 A Most Precarious Orbit 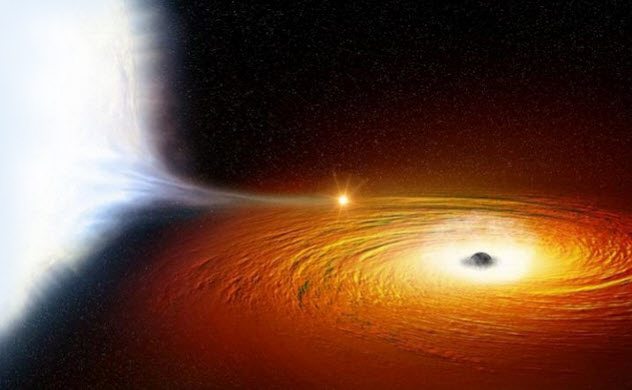 We imagine black holes destroying anything foolish enough to get near them, but objects can wander ridiculously close without getting cracked into trillions of bits.

The newly discovered white dwarf X9 is the closest orbiting body ever spied around a black hole. X9 is not even three times as far away from its black hole as the Moon is from Earth, so it completes its orbit in only 28 minutes. This means that a black hole is propelling a white dwarf around itself faster than the average pizza delivery.

It is 15,000ish-light-years away in the globular star cluster 47 Tucanae, part of the Tucana (toucan) constellation.[8] Astronomers say X9 was likely a big red star before a black hole persuaded it to come close and then sucked its outer layers, an ongoing process that may leave behind a diamond-like body. 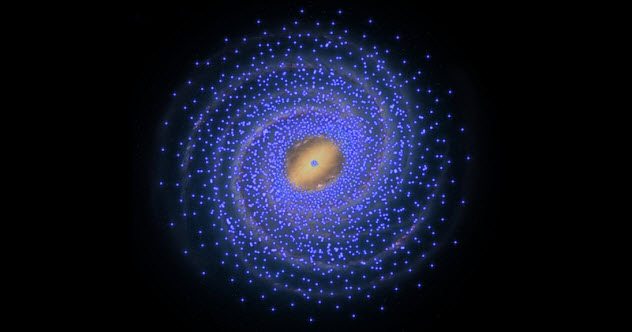 Cepheids are toddler stars only 10 million to 300 million years old. They pulsate, and their regular changes in brightness make them perfect cosmic mile markers.

Researchers have discovered them all over the Milky Way. But they weren’t sure what was going on, Cepheid-wise, near the galactic core, which is made nigh-invisible by huge globs of interstellar dust. Astronomers can cut through it by observing the core in the near-infrared, which revealed a surprisingly barren “desert” lacking any young stars.

A few Cepheids are snuggled up in the very center of the galaxy. But just outside this region, a great dead patch extends 8,000 light-years in all directions. This extreme inner patch has no new stars and has been eerily dormant for hundreds of millions of years.[9] 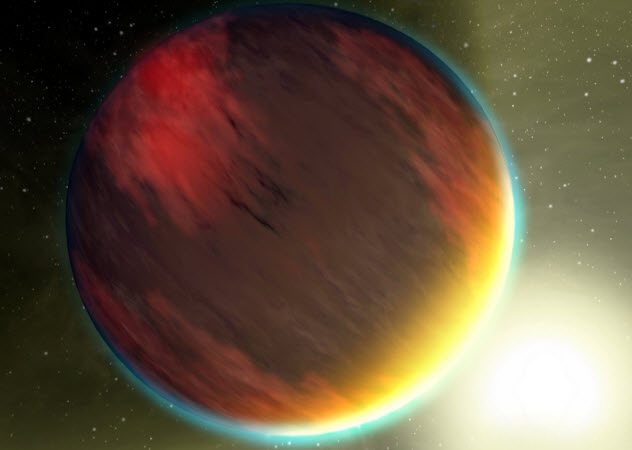 Hot Jupiters don’t make any sense. They’re Jupiter-sized gas balls but way closer to their stars than they should be, turning in tighter orbits than even Mercury.

Scientists have been studying these odd beasts for the past 20 years and have logged about 300 of them. But they are always alone in their orbits. Then in 2015, University of Michigan researchers finally confirmed something that seemed impossible, a hot Jupiter with a companion.[10]

And not just one, but two! The WASP-47 family includes the Sun-skirting hot Jupiter in question and two wildly different underlings, a larger Neptune-like body as well as a smaller, much denser, rocky super-Earth.