At roughly 9:00 PM on June 17, 2015, a 21-year-old gunman opened fire in a historic black church in Charleston, South Carolina, killing nine people. The suspect, Dylann Roof, was a white supremacist with the stated goal of triggering another civil war. While it’s tempting to write him off as a lone nutjob, experts are cautioning we’d be foolish to do so. Rather than an aberration, Roof and his actions may well represent the dark future of domestic terrorism. Here’s how.

10The Rise Of The Lone Wolf 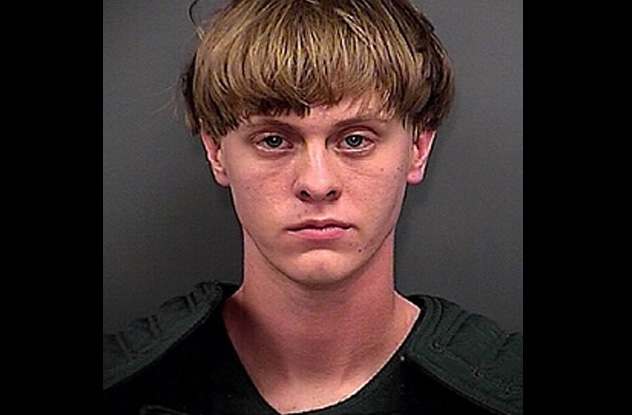 At time of writing, Roof is thought to have acted alone. Although he was involved with at least one openly racist group, the decision to pick up a gun and murder nine people came from his own twisted mind. Terrifyingly, this may be a future norm for terrorism.

Though well-funded groups rampage across the Middle East and Africa, terrorists who attack within the United States are largely solo fliers. Out of 60 incidents noted by the Southern Poverty Law Center (SPLC) between April 2009 and February 2015, 75 percent were found to be the work of one lone individual, and 90 percent involved no more than two people. The SPLC has dubbed the post-2009 era “the age of the lone wolf.”

While nine people dead is an unmitigated tragedy, lone wolves have previously shown they are capable of much worse. In 2011, Anders Breivik murdered 77 in a gun and bomb attack in Norway. As further people follow in their footsteps, preventing an attack becomes ever harder. While the authorities can monitor a terror group’s communications, how do you monitor one person’s thoughts? The answer: You can’t. 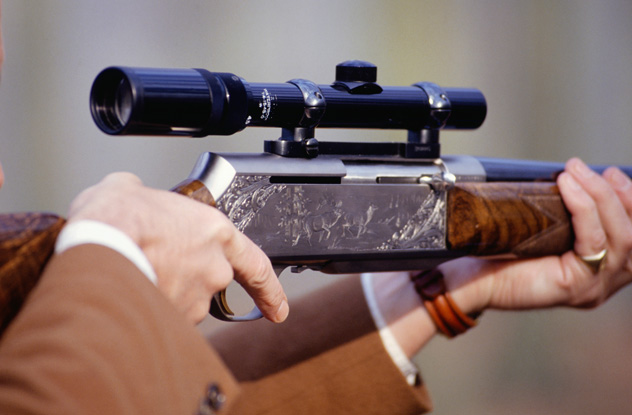 The Southern Poverty Law Center study covered perpetrators inspired by Islam, racism, opposition to the government, and hate against other specific groups. It covered mentally ill perpetrators and those acting on personal grudges, and it included attacks, aborted attacks, and confrontations initiated by authorities. Under this definition of domestic terrorism (which is not shared by everyone), an attack has been attempted on American soil every 34 days.

In 2013, one Texas native tried to bomb a gas pipeline but succeeded only in injuring himself. In 2014, Robert James Talbot Jr. was arrested only minutes before initiating a string of robberies and attacks that would have culminated in blowing up government buildings. Last summer, two Nevada residents shot dead two police officers and daubed swastikas on their bodies.

Remember Frazier Glenn Miller? Last year, the self-described “proud terrorist” opened fire at a Jewish community center, killing three. Then there’s David “Joey” Pedersen and his wife, Holly, who drove across three states, shooting Jews and black people. Or Wade Michael Page, who gunned down six people at a Sikh temple. In each instance, law enforcement had limited or no knowledge that an attack was about to happen. 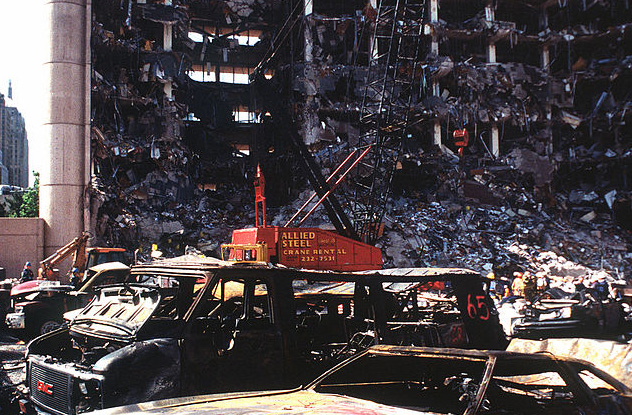 As the Charlie Hebdo attacks showed, Islamist violence is a real and grave threat. Since 2001, over 50 US citizens have been killed by Muslim extremists, most famously in the Boston Marathon bombings. Yet while we constantly hear about Islamic terror, other, deadlier kinds get swept under the rug. In the same post-9/11 period, right-wing attackers killed five times as many Americans as their Muslim counterparts.

This collective myopia is creating a worrying cultural blind spot. The years before the Oklahoma City bombing were characterized by a kid-gloves attitude to domestic terrorism. In the years after, law enforcement cracked down hard on right-wing terror. As a result, at least three catastrophic bomb plots were foiled, including one near miss in 1997 that could have killed 10 times as many people as 9/11. Then came 2001. Since then, resources and intelligence have all been directed toward thwarting Islamic terror, with the result that right-wing terrorists are overlooked.

7Terrorists Use Modern Means To Broadcast Their Message 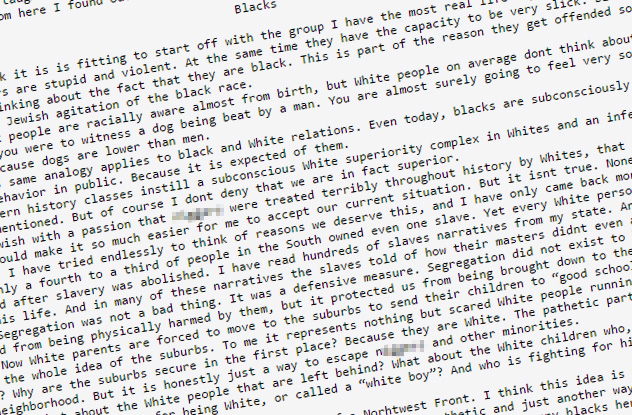 In an online manifesto published before the Charleston attack, Dylann Roof wrote:

“The event that truly awakened me was the Trayvon Martin case . . . this prompted me to type in the words ‘black on White crime’ into Google, and I have never been the same since that day. The first website I came to was the Council of Conservative Citizens. There were pages upon pages of these brutal black on White murders. I was in disbelief. At this moment I realized that something was very wrong. How could the news be blowing up the Trayvon Martin case while hundreds of these black on White murders got ignored?”

His manifesto highlights a trend. As beneficial as the Internet may be in increasing everyone’s access to information, some terrorists are radicalized online, often without even realizing it.

Infamously, ISIS has been using their social media skills to drawn in Western women and spread terror. Others are radicalized almost by accident. Anders Breivik was inspired to kill dozens by far-right websites, even though their owners claim they don’t want to cause violence. Similarly, Roof took inspiration from the inflammatory writings of the Council of Conservative Citizens, a group that does not overtly encourage their readers to shoot up churches. The 2009 Fort Hood shooter was similarly exposed to hate, this time via radical Islamist websites.

It’s difficult to figure out who is being radicalized by a website, all the more so if those running it don’t even advocate murder. Twenty years ago, angry young men had to go to compounds and safe houses to get turned into killers. Now, they simply have to pick up their tablet.

Data on hate crimes is terrible. Here’s why.

According to figures from the Bureau of Justice Statistics, there are roughly a quarter of a million hate crimes in the US every year. Want to guess how many get reported? Around 2 percent.

The SPLC has called hate crimes “horrifically underreported,” with local and state police frequently failing to pass such incidents on to the FBI. In 2013, for example, the FBI officially recorded zero hate crimes in South Carolina, a state that lacks any legal hate crime designation. Later, they revised that figure to 51.

This makes tracking hate groups and potential terrorists much harder. While organizations like the SPLC do the best they can, this nationwide negligence can only ever give an incomplete picture.

5They Also Fail At Tracking Terrorists 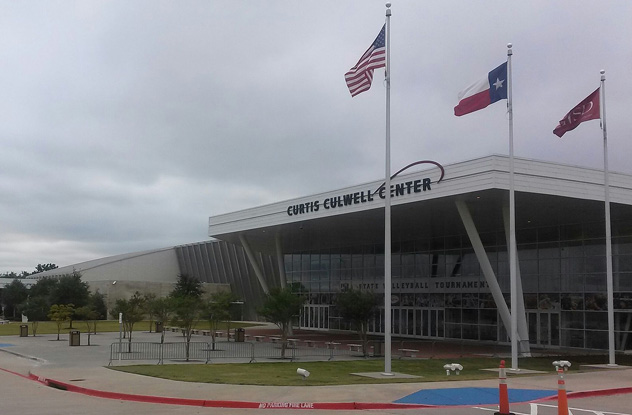 In May 2015, the FBI enlisted local law enforcement to conduct surveillance on hundreds of ISIS supporters in the United States. This followed the Garland, Texas, attack, in which Elton Simpson and Nadir Soofi tried to shoot up a “Draw Muhammad” contest before being killed by local police officers.

Simpson had already been known to the government. He’d been found guilty about lying to the FBI over his intent to wage jihad in Somalia and was being actively monitored. Then, suddenly, they lost track of him. Despite being under surveillance, Simpson managed to acquire an assault rifle and get to Garland without the FBI realizing. Were it not for local law enforcement, their mistake could have resulted in a massacre.

In 2012, the US government had only a single analyst researching all far-right groups in the country. With such a dubious allocation of resources, it’s perhaps no surprise Roof wasn’t on anyone’s radar.

The killing of Lee Rigby, the attack in Garland, and the foiled suicide attack in Kansas City all saw a broad media consensus form against the terrorists responsible. No such thing happened in Charleston. Instead, the media debated the definition of terrorism.

The attack had certain hallmarks of terrorism, including a politically motivated ideology and a desire to inflict terror on a specific group of people. Some in the media, however, classified it as a hate crime. Some also saw it as a gun control issue, sparking renewed arguments about guns and mental health.

According to the director of the Council on American-Islamic Relations, since 9/11, “We have been conditioned to accept that if the violence is committed by a Muslim, then it is terrorism.” When the perpetrator is white, he is likely called something else. Even Anders Breivik was held by sections of the media to simply be mentally ill.

After Charleston, The Confederate Flag Is Still Flying High

In a photograph posted online, Dylann Roof can be seen flying a Confederate flag. In another, he’s wearing the flag of Apartheid-era South Africa. Both flags symbolize hatred, forged by states that explicitly declared black people to be inferior to whites. Both have had horrendous, crimes committed under their banner. But only one of them is still venerated publicly.

In South Carolina, the Confederate flag has historically been flown at the state capitol. In the wake of the Charleston shootings, the governor has called for the flag to be taken down, and some other states have done the same. But let’s look at the larger picture: Had Roof been flying Nazi flags, ISIS flags, or Italian Fascist flags he may have come to law enforcement’s attention long ago. But the Confederate flag gets a pass because of its association with various aspects of Southern heritage.

After World War II, Germany underwent extensive de-Nazification, which involved even banning flags and other symbols. In the United States, the First Amendment protects against such measures, but the government can still refuse to use such symbols themselves. The alternative—flying the Confederate flag on an official government building—unwittingly endorses the hate that the flag represents. Taking the flags down is a step in the right direction, but it’s unfortunate that it took something like this event to bring that change.

2We Still Don’t Understand The Cause

Dylann Roof was a soft-spoken, friendly kid. Anders Breivik was middle-class, intelligent, and played the stock market. Timothy McVeigh was an angry, outspoken, semi-homeless veteran. These conflicting personality types highlight a very unfortunate truth about terrorism: We still don’t know what causes it.

Over the years, there have been many attempts to find what might lie at the root of terrorist acts. Some reports claim poverty is the one significant factor. Others identify middle- and upper-class kids as the most likely to get involved. The only tentative link seems to be between mental illness and lone wolves, but even that has been disputed.

Since we don’t know the causes of terrorism, we’re not very good at predicting it. This means the next attack will likely come out of the blue, just like the Charleston shootings.

In the days after the Charlie Hebdo attacks in Paris, millions of people gathered in solidarity to march and declare “Je suis Charlie.” There were candlelight vigils, speeches, and donations. In Norway in 2011, political parties put aside their differences to mourn for the dead. Turn to South Carolina, and the same thing is happening. In the immediate aftermath, vigils were held across the country. People marched to end the hate. Rather than be torn apart by Roof’s longed-for civil war, strangers chose to stand together.

That’s the single good thing we’ve learned from all these attacks. Whether they’re perpetrated by violent Islamists or those on the far right, they never succeed in destroying our basic faith in one another. Even as lone wolves shout about killing all black people, establishing a Sharia state, or bringing down the government, their actions put their goals beyond their grasp. Instead of driving us apart, they only make us more determined to stand together against such nonsense. It may not be much comfort in the face of all the death and horror that gripped Charleston that night, but these murderers won’t win, no matter how many times they try to destroy us.