Throughout military history, generals have known that to hold the high ground is to gain an advantage on the battlefield. Since the launch of the world’s first satellite, outer space has become the ultimate high ground, the control of which could theoretically give an advantage to any nation capable of deploying weapons into space. However, many of the programs that were created to militarize space have failed miserably or been canceled, with some being nothing more than money pits. 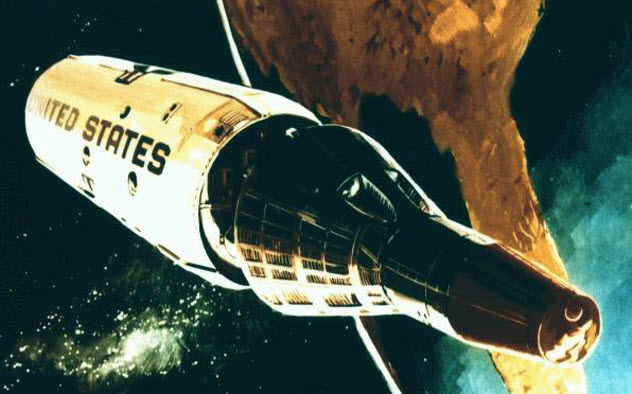 The Manned Orbiting Laboratory (MOL) was a US Air Force project announced in 1963, supposedly to conduct experiments in orbit which would determine the military usefulness of placing a man in space. However, the real mission of MOL was to place a manned reconnaissance platform into orbit.

The final MOL configuration had a Gemini capsule in the front, a pressurized module for astronauts in the middle, and cameras in the back. There was even a test launch of a mock-up MOL in 1966. However, toward the latter half of the 1960s, MOL was increasingly criticized. The project was over budget by more than $1 billion, and technology had improved to the point of potentially making the presence of astronauts unnecessary.

In 1969, MOL was canceled unceremoniously by President Richard Nixon.

Like the US MOL program, the Almaz program was the Soviet Union’s attempt to militarize manned spaceflight at the height of the Cold War. The Almaz program actually had several manned missions and returned useful surveillance footage. To disguise the nature of the program, the launches of the Almaz space stations took place within the civilian Salyut space station program.

The first successful Almaz launch, OPS-2 (disguised as “Salyut-3”), contained not only a variety of cameras but also a 23-millimeter (90 in) cannon. However, firing the cannon with a crew on board was ruled out because it would shake the entire station. OPS-2 received a Soyuz transport spacecraft with two cosmonauts, while OPS-3 received three crews with two astronauts per crew.

After just two space stations, senior Soviet officials reached the same conclusion that the Americans had with MOL eight years earlier: The addition of a man in space was not worth the expense, effort, and risk, and the program was canceled. Soviet cosmonauts managed just 81 cumulative days in orbit, a short time compared to the billions of rubles spent on the project. 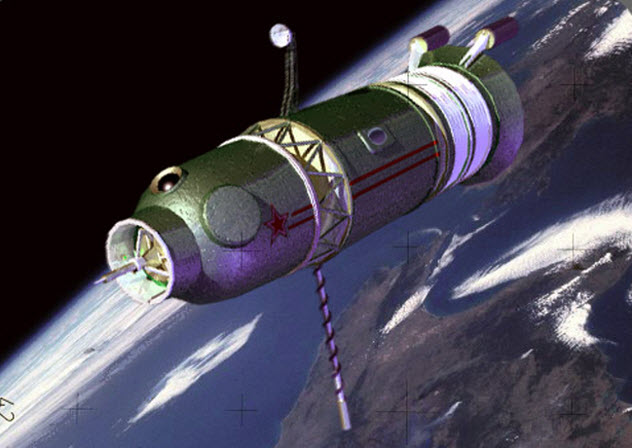 The Soyuz spacecraft is a workhorse system to transport crew members to the International Space Station. However, during the development of the spacecraft in the 1960s, chief designer Sergei Korolev initially proposed military applications for the project because he needed military funding to cover construction and other costs. While Korolev worked on the civilian version, the development of the military version was subcontracted to another designer.

The Soyuz PPK spacecraft was meant to be a manned space interceptor capable of rendezvousing with enemy satellites, with the goal of either destroying or inspecting them. For visits to satellites in higher orbits, the spacecraft would have refueled via a separate tanker spacecraft. It was believed that the Soyuz PPK could have reached an orbit of 6,000 kilometers (3,700 mi).

By 1964, the program was put on hold. With technological advances, unmanned military spacecraft had become more viable, and the Soviet military lost interest in manned spacecraft. The Soyuz PPK project was canceled in 1965. However, the civilian version of the Soyuz survived and is still used today.

During the Cold War, the Soviet military was in a continual nuclear arms race with the US military. The US had early warning radars facing the North Pole, the most likely direction from which Soviet missiles would come. Realizing that the US would be blind to missiles approaching from other directions, the Soviets devised the Fractional Orbital Bombardment System (FOBS) to take advantage of this military weakness.

With FOBS, nuclear warheads would be launched into a steeply inclined polar orbit, allowing them to approach the continental US from any direction, especially the south. The warheads would break out of orbit on Soviet command, giving the US no warning before a nuclear detonation.

The R-36 SCARP missile, equipped with a modified warhead with navigation and braking systems, was the launcher for the FOBS warheads. Test launches occurred from 1966 to 1967. Then the signing of the Outer Space Treaty prohibited the Soviets from launching nuclear warheads into space.

However, the Soviets could still orbit everything without the nuclear warheads. They also kept FOBS missiles on alert in silos, with 18 systems deployed. The missiles were ultimately phased out in 1983 under the SALT II arms reduction treaty. 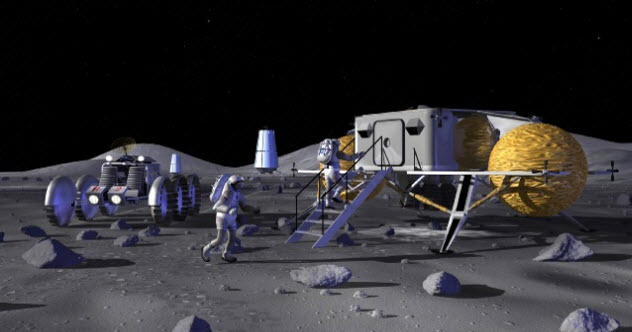 In 1961, just as President John F. Kennedy set a goal for America to send civilian astronauts to the Moon, the US Air Force released a summary of its secret plan for Project Lunex, a military base on the Moon that was supposed to be built by 1967. For the launch vehicle, the military envisioned a space plane launched by a solid rocket booster and a LOX/LH2 core, a design similar to that of the space shuttle. Some hardware developed for the project, such as the RL-10 rocket engine, is still in use today.

A primary goal of the project was to increase the involvement of the US military in space travel. As the Soviets did not have separate military and civilian space programs, a US military presence in space would allow a rapid response to Soviet attempts to militarize space. However, the US military was ill-suited to undertake a manned lunar mission that would require it to independently develop all the hardware for the project.

Ultimately, the program was shelved when the military threw its weight behind a unified national project, which became Project Apollo.

During the 1970s, the Soviet military responded to the development of a US space shuttle with its own spacecraft, Buran. The Buran shuttle was mainly a military project because the USSR was paranoid that the US space shuttle could deploy nuclear weapons over Soviet territory. In general, Buran had design elements and capabilities similar to the US shuttle. But there were some differences, such as liquid-fueled boosters and expendable main engines that used a separate Energia rocket system.

Unlike the US space shuttle, which was designed mainly to deploy satellites, Buran was supposed to service, assemble, and return large payloads from space. For example, Buran was meant to assemble Mir-2, a large Soviet space station, and deploy and service large antimissile and antisatellite complexes in orbit. However, the collapse of the Soviet Union forced the cancellation of the program after just one unmanned flight, with Buran and its associated support facilities left to decay. 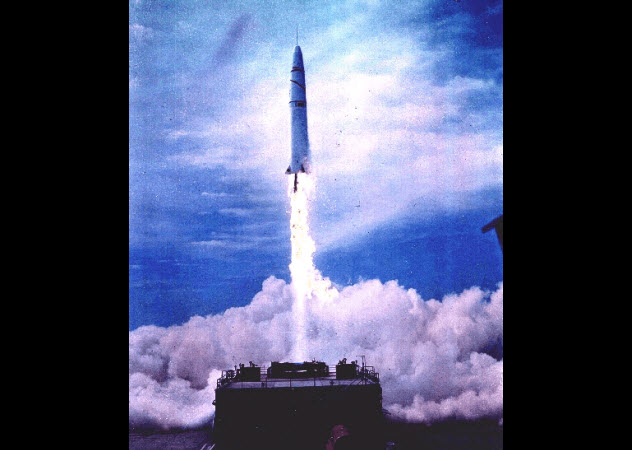 In the early 1960s, the US Air Force planned to launch nuclear missiles into space to destroy enemy satellites in the event of a nuclear attack. Known as “Program 437,” the project was approved by US Secretary of Defense Robert McNamara in 1962. With missiles deployed on Johnston Island in the Pacific, the program was declared operational in 1964 after four test launches.

Program 437 was the successor to Operation Fishbowl, in which nuclear weapons were detonated in the upper atmosphere and space to investigate the effects of the explosions. The largest of the tests, a 1,400-kiloton blast, disrupted power and communications as far away as Hawaii and severely degraded or destroyed seven satellites.

Program 437’s demise was slow but inevitable. The launch site’s vulnerability to severe weather and the age of the available Thor rockets meant that the program had an expiry date. In addition, with the closest military support for Johnston Island hundreds of miles away in Hawaii, the isolated site was at heightened risk for a Soviet commando attack. Finally, the Vietnam War was also ramping up and draining US military resources, so the Air Force decided to cut back and eventually terminated Program 437. 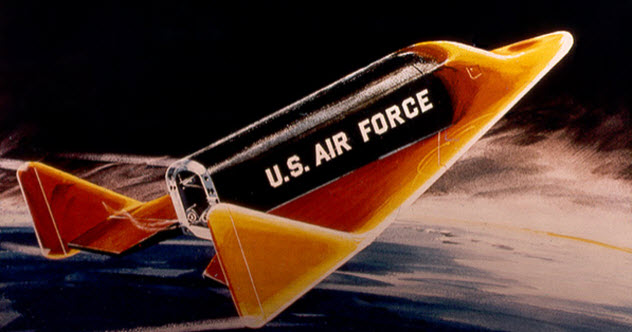 The Dyna-Soar program, a military precursor to the shuttle, started in 1958. Dyna-Soar was a hypersonic glider carrying one pilot and a small payload that would have launched on a Titan missile and glided back to base. The small payload and limited crew capacity heavily restricted the missions that Dyna-Soar could undertake. At one time, it was expected to be the first manned US spacecraft. But ultimately, the space plane became a vehicle in search of a mission, whether military or civilian.

There were many military uses envisioned for the spacecraft. When flying at low altitudes, Dyna-Soar could attack from any direction while remaining undetectable until three minutes before arriving at its target, potentially making the spacecraft an unstoppable nuclear bomber. Dyna-Soar could also skim over the Soviet Union at altitudes of 25–50 kilometers (15–30 mi), providing much better imaging resolutions than the best spy satellites.

However, Dyna-Soar, much like its namesakes, was destined to become extinct. The unclear nature of the space plane’s potential missions led to its program being canceled in favor of MOL, which was also later canceled. However, some good did come from Dyna-Soar. After the program’s cancellation, Neil Armstrong, who had originally signed up as a test pilot for Dyna-Soar, transferred to NASA as a civilian astronaut. 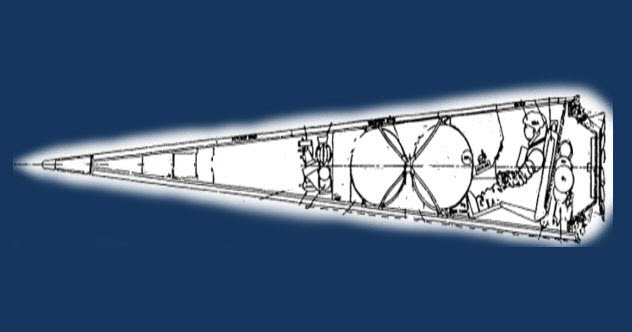 In the 1970s, the US Navy, concerned about Soviet spy satellites tracking their warships, began development of a one-man space cruiser that would be launched by missile from a submarine and would destroy Soviet satellites before the enemy’s tracking system knew what happened.

The space cruiser was a cone-shaped vehicle less than 9 meters (30 ft) long. The design was so basic (see blueprints above) that the lone astronaut would have had to rely on a space suit for life support at all times. With an open cockpit in space, the pilot would have his head sticking outside the vehicle during orbital operations.

This project, along with other plans to militarize space, was apparently canceled by the mid-1970s when the US military was forced to accept use of the space shuttle for all their launch needs. 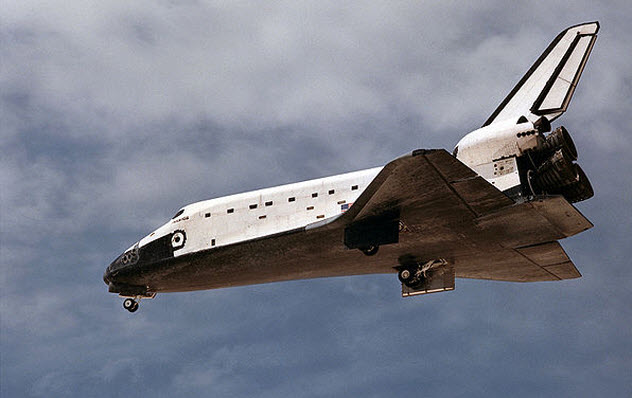 From the end of the Apollo program until 2011, the space shuttle was best known as the main US transportation system to space. However, it’s not widely known that the payload and operational requirements for the space shuttle were largely driven by the US military. With the shuttle designed to replace all existing US launch systems at the time, the military wanted a large payload bay of 5 meters (15 ft) in diameter from which to launch spy satellites.

The US military also planned shuttle missions with a single polar orbit to photograph the Soviet Union or even snare a Soviet spacecraft and bring it back to Earth. Concerned that the Soviets would defend their satellites with antisatellite weapons, the US Air Force wanted these thefts of Soviet spacecraft to be done quickly. Also, due to the Earth’s rotation after one orbit by the shuttle, the craft needed large delta wings to have the cross-range to glide back to its launch site.

Although the military could provide the budget and political clout to shield NASA from skeptical US politicians, the military didn’t really need the shuttle because they had expendable rockets. However, NASA did need the shuttle to build a planned space station and maintain a human presence in orbit. That gave the military the upper hand in negotiations. With no choice, NASA agreed in 1971 to all of the military’s conditions for the shuttle’s payload and cross-range capabilities.

SLC-6, an old launchpad at Vandenberg Air Force Base, had to be reconstructed to launch the shuttle into polar orbit for military missions. Originally intended for MOL launches, SLC-6 was mothballed for a few years after the MOL program was canceled.

When the Challenger disaster happened, the military had an excuse to abandon the shuttle, which was not launching quickly enough for their needs anyway. This ended the military shuttle and their manned space missions for good.

Mark Chen is an Internet aficionado primarily interested in current and recent conflict occurring across the globe, with a dash of economics and technology thrown in for good measure.