In Roman mythology, Jupiter is the equivalent to Greece’s Zeus and is called “dies pater,” or “shining father.” Jupiter is the son of Saturn, brother of Neptune, and brother of Juno, who just happens to also be his wife. Jupiter the celestial body, meanwhile, is the largest planet in the solar system. It also may be the most important to us after Earth itself, since it changed the way we viewed Earth, the solar system, ourselves, and the universe we call home. 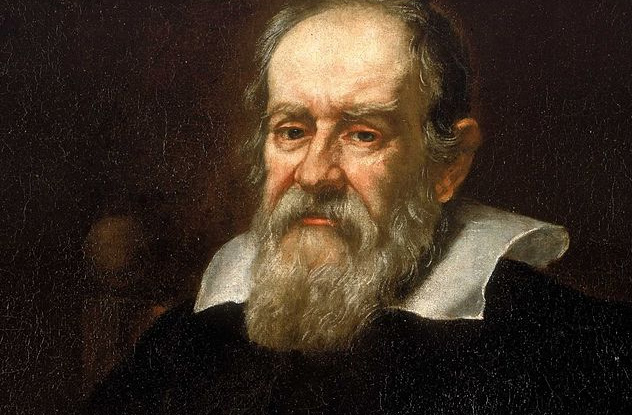 In 1610, Galileo discovered Jupiter and its four primary moons Europa, Io, Callisto, and Ganymede, which today are known collectively as the Galilean moons. This was the first time a celestial body was observed circling anything other than the Moon orbiting Earth. This provided excellent support for Polish astronomer Nicolai Copernicus and his theory that Earth was not the center of the universe.

As the largest planet in the solar system, Jupiter has more than twice the mass of rest of the solar system combined, not counting the Sun. Jupiter has an atmosphere very much like a star, consisting mainly of hydrogen and helium, and planetary scientists think that had it gotten about 80 times larger, it would have turned into a star. As it is, with its four massive moons and many other smaller ones, Jupiter is a miniature solar system in and of itself. Jupiter is so massive that over 1,300 Earth-sized planets would be required to match the volume of the gas giant.

9Jupiter And His Great Red Spot 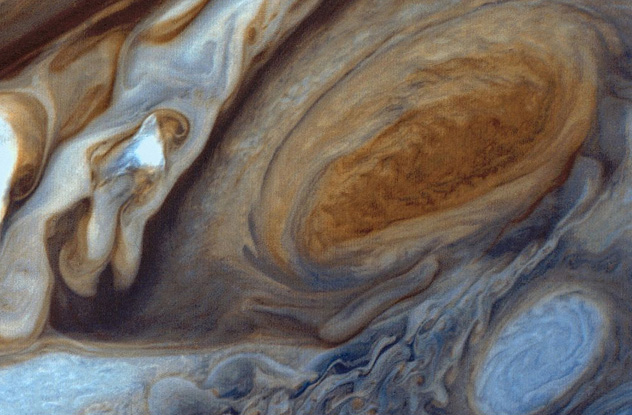 The magnificent bands of Jupiter are divided into light zones and dark belts caused by constant pounding by strong east-to-west winds that have been clocked at 650 kilometers (400 mi) an hour. Zones of white clouds in the upper atmosphere consist of a frozen, crystallized form of ammonia. Darker clouds, containing other chemicals, are found in the darker belts, and blue clouds are observed at the deepest visible levels. These climatic features are far from stagnant and change dramatically over short periods of time.

Besides the possibility of diamonds raining down from the atmosphere, the feature that stands out the most on Jupiter has got to be the giant, 300-year-old super-storm called the Great Red Spot. Rotating counter-clockwise, the Great Red Spot is at its widest over three times the diameter of Earth. Winds in the center blow at 450 kilometers (225 mi) an hour. The Great Red Spot constantly changes in size and sometimes even seems to disappear, only to return every time.

8The Incredible Magnetic Field Of Jupiter 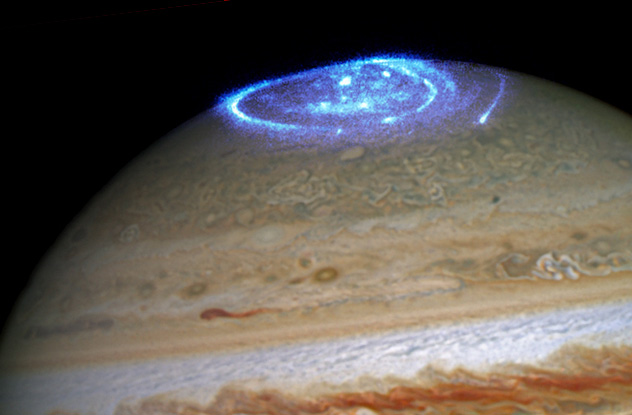 With a magnetic field almost 20,000 times stronger than that of the Earth, Jupiter is by far the magnetic king of our planetary system. Using an intensified band of electrons, Jupiter traps electrically charged particles that continuously bombard the system with a level of radiation over 1,000 times that of the fatal level for human beings. This radiation is so intense that it can damage even the most heavily shielded NASA spacecraft, like the Galileo probe.

7Jupiter Is The King Of Spin

Jupiter takes just under 10 hours to complete a full rotation on its axis, compared with 24 hours here on Earth. A day on Jupiter varies from nine hours and 56 minutes at both poles to nine hours and 50 minutes around the equator of the giant planet. This exceedingly fast rotation causes Jupiter to bulge out at the equator and flatten at top, causing the giant to be around 7 percent wider at the equator than it is at the poles. This rotation speed is exceptional when one considers the sheer size of the great planet, which allows it to reign high in yet another category: the shortest day in the planetary system.

Being a gaseous planet, Jupiter does not rotate as a solid sphere like Earth does. Instead, it rotates slightly faster at the equator than at the polar regions, at a speed of 50,000 kilometers (30,000 mi) per hour an hour—27 times faster than the earth rotates.

6Jupiter Is The Biggest Radio In The Solar System 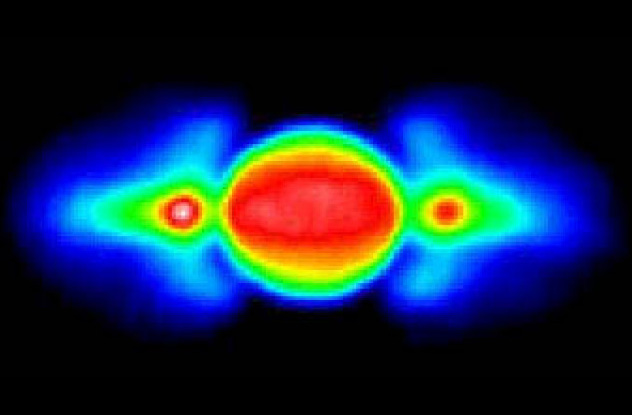 Another area in which Jupiter excels at is the blasts of powerful natural radio waves it produces, creating eerie noises when received by the antennas of shortwave radios here on Earth. The radio waves, though inaudible to the human ear, can make for some strange entertainment when converted to audio signals by earth-bound radio equipment.

These radio emissions are naturally generated by instabilities in plasma in the magnetosphere of the gas giant. They caused quite a stir until they were verified as being of natural origins rather than from some alien species. Most astrophysicists theorize that ionized gases above Jupiter and its magnetic poles occasionally act as a very strong radio laser, producing radiation so intense that the gas giant quite often outshines even the Sun as a radio energy source of shortwave radio wavelengths. Scientists think that the power for this phenomenon is somehow connected to the volcanic moon Io.

5The Rings Of Jupiter 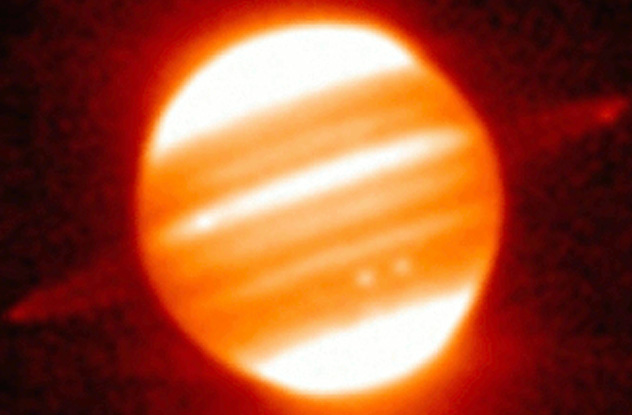 NASA was pleasantly surprised in 1979 when the Voyager One spacecraft discovered three rings around the equator of Jupiter. These rings are much fainter than the rings of Saturn so could not be detected with Earth-based scientific instruments. The main ring is around 30 kilometers (20 mi) thick, 6.000 kilometers (4,000 mi) wide, and flat.

The inner ring—cloud-like and called a halo—is some 20,000 kilometers (12,000 mi) thick. The halo of this inner ring extends about half of the way down to the tops of the uppermost cloud layer and expands by interacting with the powerful magnetic field of Jupiter. Both the main ring and halo are composed of small, dark particles.

Due to its transparency, the third ring, also known as the gossamer ring, is in reality three rings consisting of microscopic debris from three moons of Jupiter—Adrastea, Thebe, and Amalthea. Most likely constructed of dust particles that are less than 10 microns in diameter, around the same size of smoke particles, it reaches out to an outer edge some 130,000 kilometers (80,000 mi) away from the center of the planet, and inward around 30,000 kilometers (20,000 mi). Planetary scientists think that the rings of both Saturn and Jupiter may be due to impacts from celestial objects such as asteroids and comets.

4The Protector Of Planets 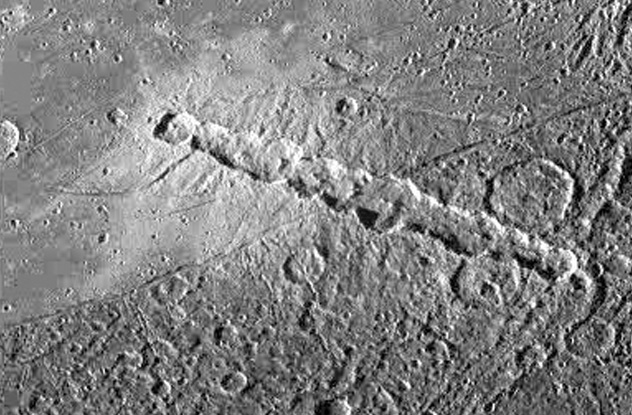 Since it’s the largest body in the solar system besides the Sun, the gravitational forces Jupiter produces may have assisted in literally shaping the rest of the solar system and maybe even allowing life to exist as it does today. According to a study published in Nature, Jupiter might have swung both Uranus and Neptune out to where they currently reside, in what was a violent show of sheer planetary might. And according to an article in Science magazine, along with help from Saturn, Jupiter may have also hurled a massive amount of debris in at the inner planets during the early history of the solar system.

In fact, scientists are now pretty sure that the gas giant is keeping some asteroids from impacting the planet, and recent events such as the Comet Shoemaker–Levy 9 impact have shown that it can, and does, rein in what would be catastrophic impacts had they hit Earth. Current data shows the gravitational field of Jupiter has a strong influence on many asteroids that have gathered into the areas directly before, and right after, the giant planet during its trip around the Sun. These asteroids are collectively known as the “Trojan asteroids” after three of the largest ones that reside there—Hector, Achilles, and Agamemnon, names from Homer’s The Iliad written concerning the Trojan War. 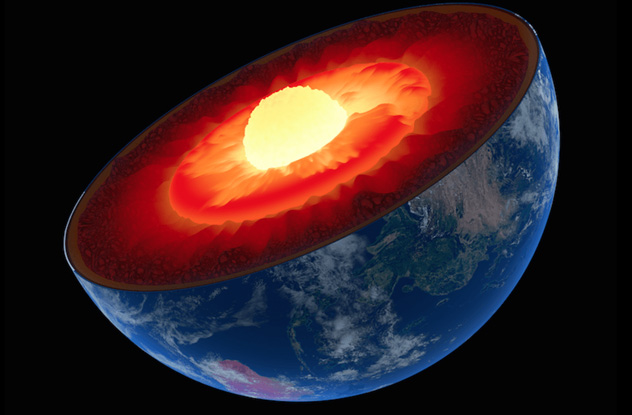 Scientists postulate that Jupiter has an inner core that is 10 times smaller than the entire planet Earth is, with the aforementioned layer of liquid metallic hydrogen making up 80–90 percent of the diameter of the entire planet. The diameter of Earth is just under 13,000 kilometers (8,000 mi), so the core of Jupiter should be just under 1,300 kilometers (800 mi) across. This makes it the same size as the core of the Earth, which is thought to be around 1,200 kilometers (750 mi) in diameter.

According to NASA, Jupiter is over five times farther away from the Sun than planet Earth. 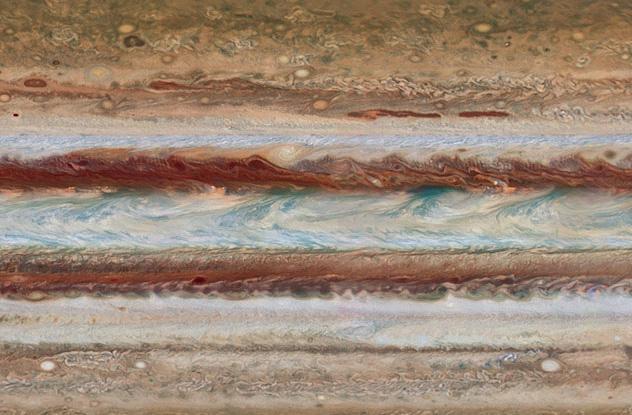 The atmospheric composition of Jupiter is a chemical smorgasbord consisting of 89.2 percent molecular hydrogen and 10.2 percent helium. The rest of the atmosphere is made up of trace amounts of ammonia, hydrogen deuteride, methane, ethane, water, ammonia ice aerosols, water ice aerosols, and ammonia hydro-sulfide aerosols—a chemical nightmare as far as human life is concerned.

With a magnetic field 20,000 times that of Earth, the enormous gas giant has a dense inner core of currently unknown composition, which is completely encompassed by a thick layer of helium-enriched, fluid metallic hydrogen, all rolled up into an atmosphere made up mainly of molecular hydrogen—truly a gassy giant. 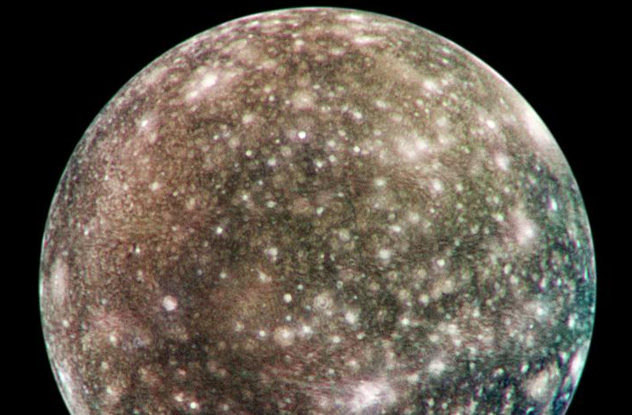 Yet even another bragging point for Jupiter is Callisto, the most heavily cratered object in the solar system. Callisto is the farthest out of the four Galilean moons and takes around one Earth-week to orbit its giant host planet. Since it orbits out beyond the radiation belt of Jupiter, Callisto suffers from less tidal influences than any of the other Galilean moons. Since it is tidally locked like our own moon, the same side of Callisto always stays faced at Jupiter.

Callisto is 5,000 kilometers (3,000 mi) in diameter, about the same size as the planet Mercury. After Ganymede and Titan, Callisto is the third-largest moon in the solar system, with our moon being the fifth-largest, following Io as the fourth. The mean surface temperature of Callisto is –139 degrees Celsius (–218 °F).

One of the four Galilean moons, Callisto was discovered by the great astronomer Galilei Galileo and almost contributed to his demise. The discovery contributed to his belief in heliocentrism, which got him in major trouble with the Catholic Church.

I live in northwestern Pennsylvania, “one of the Original 13,” where I grew up with a fascination for collectibles like baseball cards, coins, stamps, and old bottles. I have been writing in several capacities for several decades.