Over its 4.5 billion–year tenure, Earth has played host to numerous breathtaking geologic formations and awe-inspiring events. Each has shaped the planet as well as the organisms that followed, and no one can imagine what we’d look like today had these events conspired differently. 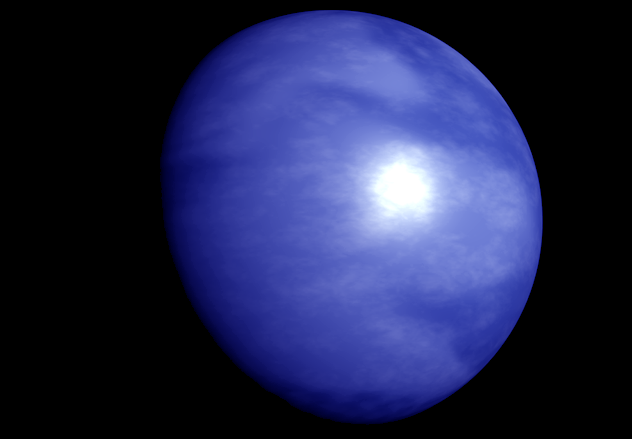 Approximately 71 percent of Earth’s crispy outer layer is covered with water, though that still leaves a good amount of dry terrain for postcard-worthy landscapes. Go back several billion years, however, and our planet was the real-life Waterworld.

Any extraterrestrials zipping through the solar system 2.5 billion years ago would have glanced down on a brilliant blue sphere. At this time, Earth was an almost uninterrupted ocean, with only 2–3 percent of the surface above water. According to Nicolas Flament from the University of Sydney, this is because the mantle was 200 degrees Celsius (360 °F) hotter than it is today, due to an abundance of radioactive materials. The radioactive heat sources raised the suboceanic crust, pushing the seas upward and causing floods worthy of the Bible.

The planetary ocean was assumed to be a scalding pot with few minerals, but new research from Stanford suggests downright pleasant temperatures. Previous estimates ran as high as 55–85 degrees Celsius (131–185 °F), enough to melt the planet’s fledgling organisms into hydrocarbon gumbo. However, the hydrogen and oxygen isotopes in chert, or fine sedimentary rock, show the all-engulfing seas topped at a comfortable 40 degrees Celsius (104 °F), perfect hot tub temperature. The abundance of hydrogen might have harmed some early species by raising aquatic acidity, but most of it escaped into space.

The asteroid that slammed into the Yucatan Peninsula 66 million years ago was not the sole cause of the dinosaurs’ demise. Prescribing to the notion that, “If you want something done right, do it yourself,” Earth itself struck the coup de grace with a flurry of volcanic violence.

A fresh study from UC Berkeley suggests that the asteroid rang Earth like a bell, sending vibrations rippling throughout the planet and “popping” volcanoes like geological zits. In addition to the force imparted by the cosmic impact, it’s speculated that frothy plumes of molten rock naturally bubble up through the mantle every 20–30 million years. In fact, such events have been implicated in several mass extinctions. Furthermore, geological evidence shows that earthquakes trigger volcanic activity, and researchers believe that the asteroid trauma resulted in magnitude-9 tremors across the entire globe.

The most notable eruptions occurred in what is now India, unleashing vast basaltic flows, which produced the Deccan Traps and at one point covered a California-sized chunk of land under 1.6 kilometers (1 mi) of lava. This region was active before the disaster, but the space rock seems to have redoubled the Deccan fury, as pre- and post-impact magma differs chemically.

During the last ice age, glaciers besieged the Pacific Northwest. The great freeze invaded the Idaho panhandle and blocked off drainage channels, creating the 600-meter-deep (2,000 ft) Glacial Lake Missoula. With more water than Lake Erie and Lake Ontario combined held behind a creaking ice dam, catastrophe was inevitable . . . and magnificent to witness!

Prone to leaks, the ice dam suffered a complete failure sometime between 13,000 and 18,000 years ago. With nothing to hold back the glacial waters, Missoula released two great lakes’ worth of water all over Idaho, Washington, and Oregon’s faces. The vast lake attained a peak flow 10 times greater than all of Earth’s rivers combined and emptied itself over the course of only a few days.

While the ice sheets have retreated until the next ice age, they’ve left us a memento. Parts of the Northwestern US are covered in ripples, similar to those formed on beaches by the waves. However, these furrows are up to 15 meters (50 ft) tall, produced by Biblical floods that rolled the ground up like a carpet in its 80-kilometer-per-hour (50 mph) sprint to the sea. 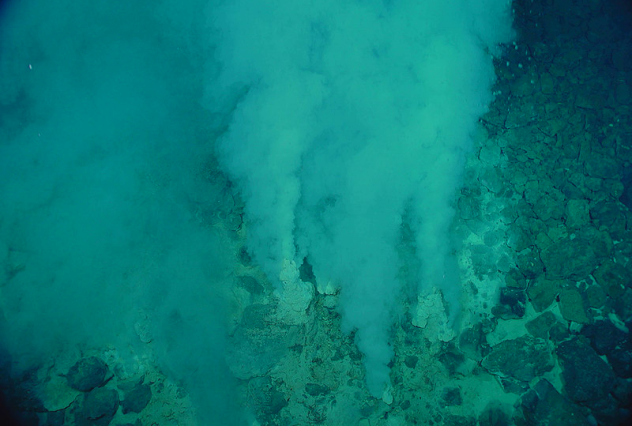 Before complex life took hold, most of Earth’s landmasses were locked together in a supercontinent called Rodinia. As Rodinia fractured and its constituent landmasses drifted, atmospheric carbon dioxide levels dropped. Then, around 700 million years ago, the planet was plunged into an ice age, known as “Snowball Earth.”

It appears that the catastrophe which froze our world eventually saved it and even seeded the oceans for the variegated procession of life-forms. How? According to a Southampton-led research, the fragmenting Rodinia birthed an oceanic ridge thousands of kilometers long. This ridge was lined with numerous volcanoes that enriched the seas with minerals from deep within the planet.

This idea is supported by formations called cap carbonates—thick, craggy deposits laid down by antediluvian volcanic flows. These could not have formed, however, unless the ocean was unexpectedly alkaline. It had been speculated that rainfall swept dissolved minerals into the ocean, turning the pH scale on its head, though it’s unlikely that this could have occurred to such a degree. Instead, explosive underwater volcanoes peppered the seas with all sorts of chemical goodies, especially the phosphorus that’s so essential to building cellular membranes and DNA, the tent poles of multicellular life.

A few hundred miles from Africa’s West Coast, the Cape Verde Islands bear the subtle signs of a prehistoric catastrophe. On Santiago, the largest island and home to 250,000 people, researchers found something odd—Sisyphean boulders that did not match the surrounding landscape. Other than sorcery, only a tsunami could hurl 700-ton stones around 800 meters (2,600 ft) inland, hundreds of feet above sea level.

About 50 kilometers (30 mi) away from Santiago, researchers caught the perpetrator red-handed—Fogo, one of Earth’s most belligerent island volcanoes. The massively scarred volcano tells us that about 73,000 years ago, one of its flanks collapsed into the sea, displacing large amounts of water and sending apocalyptic waves hurtling toward Cape Verde.

The tsunami towered 170 meters (560 ft) high, as tall as the Washington Monument. For comparison, the earthquake-induced tsunamis that battered the Indian Ocean and Japan, in 2004 and 2011 respectively, reached peak wave heights of 40 meters (130 ft). Luckily, such events are exceedingly rare. Researchers speculate (read: hope) that such a disaster will only occur once in the next 100,000 years. 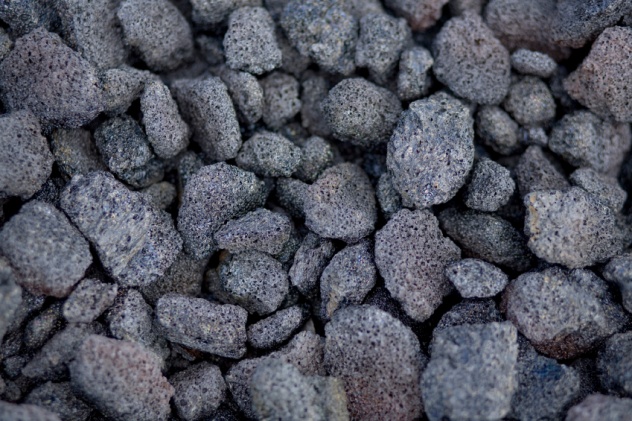 Utah wasn’t always a salty desert. Southwestern Utah was dotted with oozing volcanoes 20–30 million years ago. Although long gone, they’ve left behind a carpet of ash and igneous material across a broad swath of land that is now known as the Marysvale volcanic field.

Unexpectedly, geologists also found bits of broken rock sandwiched between the layers of volcanic ejecta. For a while, they assumed that the stones had appeared randomly from different sources, as rocks are wont to do. Now, it seems that the fractured boulders were deposited simultaneously during a single event—a record landslide named the Markagunt gravity slide.

It’s credited as one of the largest landslides ever, covering an area larger than 39 Manhattans combined. In all, 1,700–2,000 cubic kilometers (400–500 mi3) of rock are now strewn across 3,400 square kilometers (1,300 mi2) of Utahan landscape. Dating the strata of ash above and below the rocks, geologists have estimated the landslide to have occurred somewhere between 21.6 and 22 million years ago.

The cause is still unknown. It’s possible that rising magma forced a volcano’s flanks outward, creating an unstable pile of broken rock. What is known is that the landslide produced enough friction to melt the material into shards of glass 2–5 centimeters (1–2 in) thick. 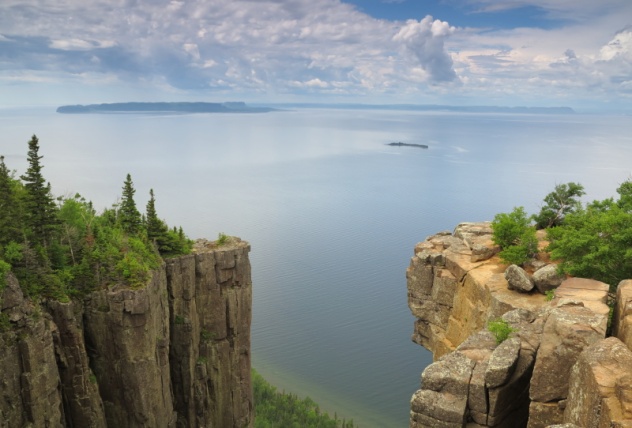 During the peak of the most recent ice age, known as the Last Glacial Maximum, the western United States boasted its own set of great lakes, as voluminous as the current Great Lakes. Stanford researchers have finally sussed out that their mammoth size was due to lower evaporation rates.

Covering large parts of California, Nevada, Oregon, and Utah, the lakes grew slowly, fed by rivers and streams. Previously, increased rain and snowfall were falsely implicated in fattening the lakes. To determine the climatic conditions of the era, researchers sampled tufa, or limestone, from Lake Surprise, a small fossil lake in Surprise Valley, California. Its dry bed is a geological time capsule ruffled with undulating ridges—the remnants of ice age shorelines.

From the decay of carbon-14 and uranium as well as the ratio between oxygen isotopes, researchers found that evaporation rates were 40 percent lower than today due to the mass cooling. They also found that Lake Surprise was once as large as San Francisco Bay, with a surface area of 1,010 square kilometers (390 mi2).

It’s geobiology’s greatest enduring riddle: Around 600 million years ago, a mysterious source enriched the oceans with molecular building blocks and spurred a massive proliferation of life-forms. Now, research has revealed an unexpected philanthropist—an ancient mountain range comparable to the Himalayas.

The range was formed as two continental plates smashed into each other, forcing chunks of crust 100 kilometers (60 mi) down into the mantle. So was born the world’s largest prehistoric mountain range, as well as a gamut of new materials from the mass heating and pressurization of rocks. The find also confirms that Himalaya-sized landforms existed in the past.

The mountains stretched 2,500 kilometers (1,600 mi) across Africa and Brazil, which were then connected as part of the supercontinent Gondwana. The range suffered brutal erosion, the fate of all gigantic terrestrial formations, and its many minerals poured into the seas. Over hundreds of millions of years, the mountains have been ground into dust. All that remains today is a network of rocky roots and a few cacti to mark the spot. 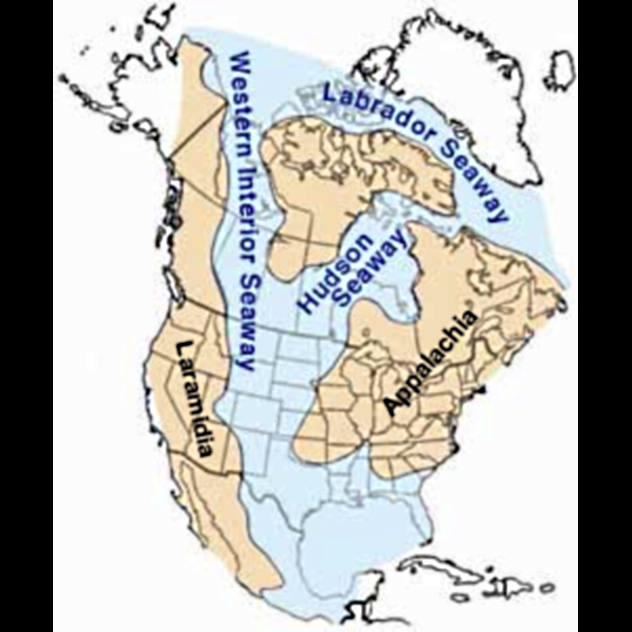 During the early and mid-Cretaceous period, North America was split by the Western Interior Seaway, which connected to the Labrador and Hudson Seaways that girdled Canada and the high North. These shallow inland seas formed as tectonic shifts sank the Americas, allowing waters to rush in. The Seaway completely dominated the terrain, stretching from the Arctic Ocean all the way down to the Gulf of Mexico.

Haphazard tectonic activity caused the inland seas to vacillate, drastically shifting their shorelines back and forth while leaving telltale deposits of sand, silts, and clay. Some of these leftovers are visible today, notably the sandstone outcropping of “Rimrocks” in Billings, Montana.

As the landscape continued to change in the late Cretaceous, the Seaway gradually retreated northward and left behind vast alluvial plains, revealing some of North America’s richest dinosaur fossil sites. Further subduction and grinding of the continental plates eventually produced a mammoth uplift that would become the Rocky Mountains.

The Sahara Desert is now a mostly inhospitable wasteland, but geologists have found the outlines of three major riparian highways that crisscrossed the desert 100,000 years ago—the Irharhar, Sahabi, and Kufrah Rivers.

They weren’t just tinkles of water. The mighty rivers created green, fertile channels through the now-parched landscape. These may have aided early humans as they migrated to gentler climes. Exactly when and where our ancestors crossed into the Mediterranean remains a mystery, though researchers now believe it may have been along these vegetated paths. In addition to rivers, northeastern Libya featured 70,000 square kilometers (27,000 mi2) of lagoons and wetlands, an oasis for travelers and a watering spot for the small animals that our forebears may have hunted.

A separate radar survey by a Japanese satellite also uncovered a network of long-gone waterways hidden under Mauritanian sands. The channel traverses over 500 kilometers (300 mi) of the Western Sahara on its way to the sea. It last flowed 5,000 years ago, and if the river could be restored to its former glory, it would rank 12th in the world.