A lot of things can happen in a week, and nobody can be expected to stay up-to-date with everything. Luckily, we’ve got you covered. Click here, and you can find out about all the important goings-on in the world. In this list, we focus more on the strange and distinct.

This week’s stories are dominated by events of the past. We take a look at shipwrecks, Chinese art, World War I weaponry, mythological monsters, and dead pop stars.

10 NASA Plans To Create Coldest Thing In The Universe 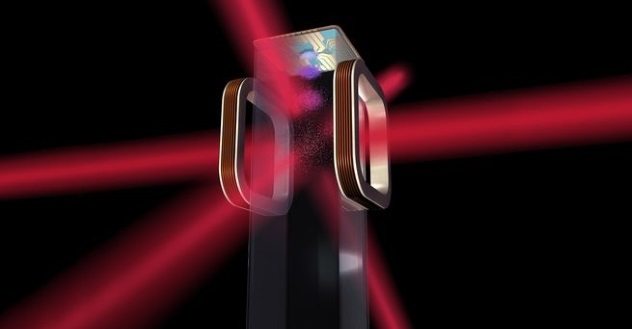 Last Sunday, NASA launched a Cygnus spacecraft headed for the International Space Station. On board were several research projects, and among them was the Cold Atom Laboratory (CAL). Scientists hope that this experiment will allow them to reach the coldest temperature in the known universe.

Once it is operational, CAL will produce clouds of ultra-cooled atoms called Bose-Einstein condensates (BECs). The current record was set in 1993 by researchers at the Low Temperature Laboratory at Aalto University in Finland. They achieved a temperature of 100 picoKelvin, or 0.0000000001 degrees Kelvin above absolute zero. NASA scientists believe CAL can be used to reach that temperature, and even surpass it, for a longer period of time.

The end goal here isn’t to break the record but rather to study BECs. When they are chilled, the atoms in Bose-Einstein condensates begin to slow down until they are almost motionless. At this point, the atoms become synchronized and behave like a wave instead of particles. However, on Earth, gravity prevents them from maintaining this state for more than fractions of a second.

Scientists are hopeful that the microgravity on the ISS will provide them with ten seconds of observation time.[1] This will grant us a never-before-seen look into the quantum world. 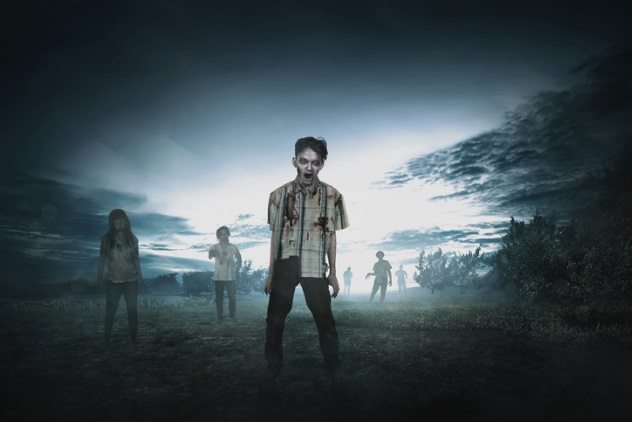 The city of Lake Worth, Florida, experienced a power outage last weekend. It lasted less than 30 minutes and affected around 8,000 people. This alone hardly seems noteworthy, but residents received an automated alert warning them of “extreme zombie activity.”

The message advised of a “power outage and zombie alert for residents of Lake Worth and Terminus.” The latter is a location featured in the zombie TV show The Walking Dead, indicating that the alert was sent as a joke. City officials issued a statement saying that Lake Worth did not have any zombie activity at the moment.[2]

Currently, authorities do not know who was behind the alert or what caused the power outage. An investigation is still ongoing, but Lake Worth spokesman Ben Kerr said that it wasn’t done by an employee or staff member. He also mentioned that their system of pre-prepared messages had been scrubbed to ensure no more zombie alerts in the future. Kerr didn’t specify if officials found any other edited messages during their investigation.

8 Old Vase In Attic Identified As Valuable Work Of Art 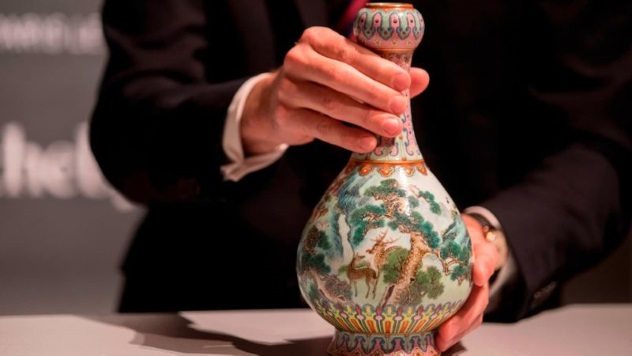 We all hear those stories about people who bought some random junk at a thrift store for a few bucks or found it gathering dust in the garage and discovered afterward that it was actually worth a fortune. It recently happened again, this time to a family in France. They were cleaning out their attic and stumbled upon a Qing dynasty porcelain vase.

The vase had been sitting in an old shoebox for a long time because its owners didn’t like it too much.[3] They had obtained it from their grandparents, who, in turn, were bequeathed the alembic by an uncle alongside several other Chinese and Japanese works of art.

The owners finally decided to take it to be appraised at Sotheby’s Paris. Art expert Olivier Valmier immediately recognized it as a high-quality, genuine item. He identified it as a Yangcai Famille-Rose porcelain vase with the mark of the Qianlong Emperor, who ruled over China during the mid- to late 18th century. He appraised it at $600,000. 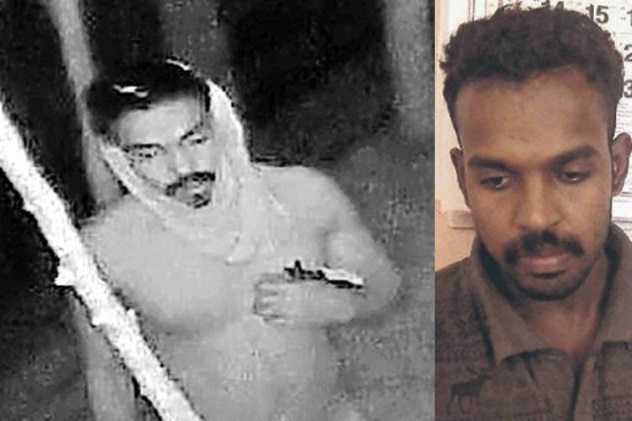 A prolific burglar was apprehended in the Indian state of Kerala. Identified as 27-year-old law student Edwin John, the criminal perpetrated at least 15 break-ins before being caught and becoming known for his odd modus operandi. Prior to entering the home, John would strip naked and cover his body in black paint. He only donned a pair of underwear . . . which he wore on his head to avoid identification.[4]

Unsurprisingly, his unique method earned John monikers like “the Naked Thief” or “Captain Underpants” from the Indian media. Despite his “foolproof” disguise, John could still be recognized from CCTV footage in which he failed to cover up his face.

The thief would also steal bikes and scooters to make his way to and from the crime scenes. Police say that there are multiple cases of theft registered against Edwin John in various cities in Kerala, and he is being investigated for many others in the neighboring state of Tamil Nadu.

6 World War I Shell Left Out With The Trash 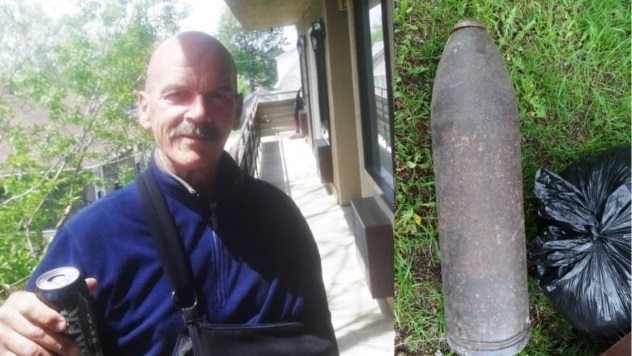 A bomb squad unit from the Canadian Forces had an unusual task when it was called out to London, Ontario, in order to dispose of a live artillery shell left out with the trash.

The ordnance in question was 60 centimeters (24 in) long, weighed 41 kilograms (90 lb), and contained 24 dynamite sticks’ worth of explosives. It was most likely made during the World War I era and was placed at the end of the driveway next to a garbage bag. The shell was discovered by neighbor Danny Vellow. Fortunately, he used to work at a bombing range and was able to recognize the bomb as live and extremely dangerous. He then proceeded to alert local police while going on a beer run. In turn, they called the bomb squad.

Authorities are still investigating the people who left the artillery shell by the curbside. Vellow described them as two “nefarious” brothers who rented the house for a short while and were recently kicked out.

The former ironworker was pleasantly informed that he had broken two records for biggest and oldest bomb found by a civilian in Canada.[5] The shell was later taken to Canadian Forces Base Borden and destroyed in a controlled explosion.

Michael Jackson’s music video for “Smooth Criminal” might be around 30 years old, but it is still of interest to neuroscientists studying spine biomechanics. One scene in particular features a seemingly gravity-defying dance move where MJ leans forward at a 45-degree angle while keeping his spine straight. A paper published in the Journal of Neurosurgery: Spine examined that move in the context of modern dances leading to new types of spinal stresses and injuries.

The paper says that the average human can tilt forward at 20 degrees. A trained dancer with good core strength can achieve 25 to 30 degrees. So how did Michael Jackson manage to lean forward so much without falling while keeping a straight spine?

It wasn’t done with wires or some kind of camera trickery. MJ often performed the feat live at concerts. Instead, he used a special shoe which he actually patented. It featured a triangular cutout in the heel which could hitch itself to a peg that rose up from the floor and anchor the dancer. This shifted the fulcrum from the sacrum to the Achilles tendon.[6] Even so, the move still put a lot of strain on the lower limb and spinal muscles.

The paper authors opined that dance moves like those pioneered by Michael Jackson and artists influenced by him challenged neuroscientists to better understand the mechanics behind spinal injury and will continue to do so in the future with new forms of injuries that will perplex neurosurgeons. 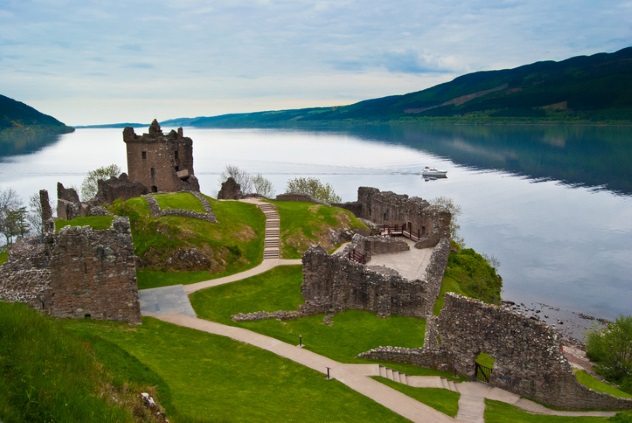 The Loch Ness Monster is, arguably, the most famous cryptid in the world. Besides throngs of true believers who flock to the lake in hopes of seeing “Nessie,” she has also attracted plenty of scientific attention over the decades. Even so, we still have no concrete evidence that there is any kind of unusual animal in Loch Ness.

The legend will soon be put to the test again. Next month, an international team of researchers will be collecting hundreds of DNA samples to determine what species inhabit the loch. The project is spearheaded by Professor Neil Gemmell from the University of Otago in New Zealand.

The plan is to take 300 water samples from various locations and depths. They should all contain DNA fragments left behind by all the animals that inhabit the lake. These can then be extracted, sequenced, and compared to a database of known species. Any results that won’t match up could lend credence to the idea that there is some mysterious creature prowling the waters.

Even if the study yields no evidence of the Loch Ness Monster, Gemmell believes it will still be a comprehensive survey on the biodiversity of the lake. He expects the project will be finished by the end of the year.[7]

3 Latin Is Too Filthy For Cake Maker 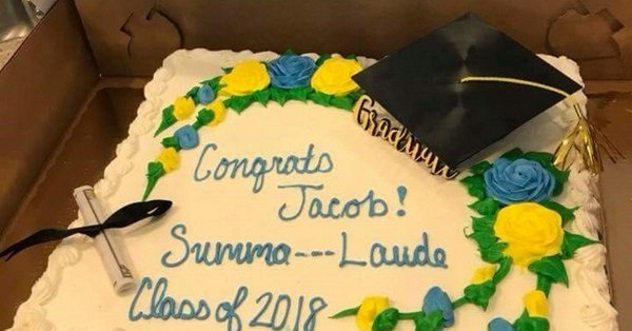 Despite her efforts, the cake maker still considered the expression vulgar. When the dessert was presented at a party for Jacob, it read “Summa –  —  – Laude.” The supermarket chain issued an apology and a refund, although Koscinski remains incredulous of the fact that she was the first person to request that particular phrase on a cake.

2 Child In Swingers Club Turns Out To Be Short Woman 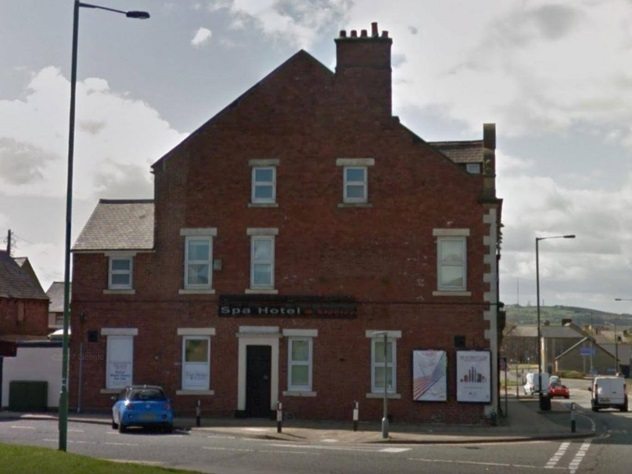 Recently released police records regarding an English swingers club revealed a curious incident that took place in July 2015. Authorities looked into the disturbing complaint that a minor was on the premises of a club that boasted, among other things, pole dancing, a spa, and a “fully equipped dungeon.” After investigating, police realized that the “child” in question was actually just a very short woman.

ClubF is a pretty notorious locale in Stanley, County Durham, that caters to swingers. For obvious reasons, minors are not allowed, yet a neighbor called authorities to report that they saw a child enter the club.

Law enforcement officials arrived on the scene and talked to staff members, who assured them that the female was an adult client. The report doesn’t say if officers met the customer under scrutiny but confirms that she was a woman of “shorter stature.”[9] 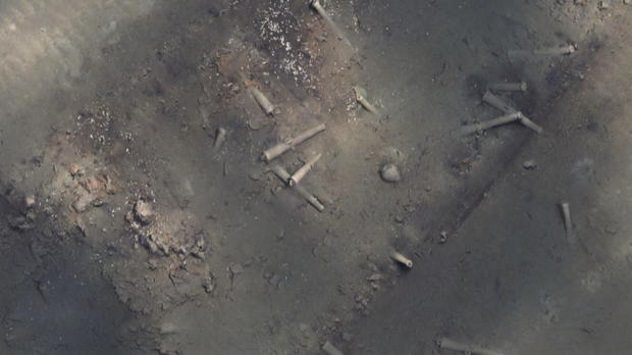 Researchers from the Woods Hole Oceanographic Institute were able to confirm the shipwreck of the San Jose, a Spanish galleon sunk three centuries ago while carrying gold, silver, and emeralds worth billions.

The identification was done with a small underwater robot called Remus 6000. It was able to scan the seafloor using long-range sonar and photograph all objects that seemed out of place. Using this technique, the submarine found bronze cannons engraved with dolphins, a telltale sign that they belonged to the San Jose.[10]

Called by many the “Holy Grail of Shipwrecks,” the galleon could potentially carry up to $17 billion in treasure. It was actually located back in November 2015 off the coast of Cartagena, Colombia, by the country’s navy. Since then, Spain and Colombia have been arguing over who is the legal owner of the booty. In fact, even now, the precise location of the shipwreck is still a secret.