Nearly 200 species of plants and animals become extinct on an average day. At the same time, thousands of new species turn up every year, each with seemingly more spectacular features than the last. 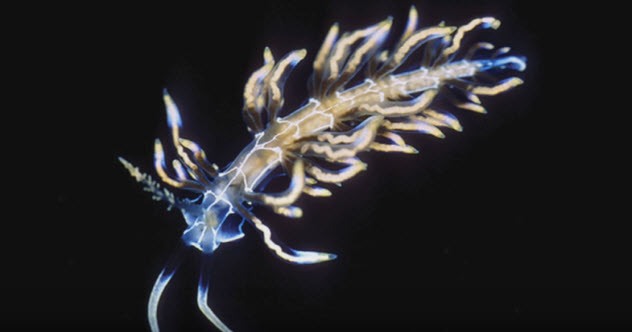 These faceless beings look like something out of an alien movie. With their fingerlike protrusions and electric, rosy-blue markings, they pulse with a rare beauty.

Phyllodesmium acanthorhinum, a newly discovered kind of sea slug, is only 2.5 centimeters (1 in) long and proud to show off its bright red, blue, and yellow coloring. Specimens have been located in the waters around Okinawa, various other islands, and the Great Barrier Reef.

Scientists have hailed this creature as a missing link between coral-eating sea slugs and those that dine on hydroids, which are microscopic organisms. But these eye-popping beauties aren’t the only gastropods that boast spectacular characteristics.

Although discovered some years earlier, sacoglossans possess a superpower of their own. With the ability to steal energy from the Sun, these solar-powered creatures may prove that slugs deserve more love despite their slime and facelessness.

Colorful CRAW-FISH ARMY in My AQUARIUM!!

Ordinary crayfish never wear colors quite as pretty as these colorful crayfish. Imagine walking through your average pet store and suddenly finding one of these beauties staring back at you through the glass.

That’s exactly what happened to German researcher Christian Lukhaup. Even though these mysterious crustaceans have been sold since 2000, no one had bothered to research them. Lukhaup traced their origins to Indonesia.

Generally, crayfish have life spans of about 40 years. These omnivores feed on rotting wood, carcasses, leaves, and insects. The adult crustaceans have no natural predators, but the juveniles must constantly avoid fish and platypuses.

These colorful crayfish—given the scientific name Cherax pulcher—are certainly blessed with good looks, but they are also plagued by bad luck. Their lives in the wild are threatened by the pet trade, habitat loss, locals hunting them for food, and all the other burdens that plague most wild animals.

The Lantern Shark Glows in the Dark | Alien Sharks

With a name as cool as “ninja lanternshark,” you’d expect the animal to be just as interesting. But you may not expect them to be slightly terrifying, too. With their bulging pale eyes and gaping teeth, these black sharks look like something out of a horror movie.

Don’t worry, though. At about 46 centimeters (18 in) long, ninja lanternsharks are much smaller than great white sharks. You’re unlikely to bump into them when you swim because they were found 300 meters (1,000 ft) underwater off the coast of Central America.

Lanternsharks are deep-sea dwellers with glowing organs called photophores that compensate for their jet-black undersea habitat. The ninja lanternshark—a new species scientifically known as Etmopterus benchleyi—got its common name from its shadowy ninja appearance that lacked most of the glowing jack-o’-lantern organs of other lanternsharks. 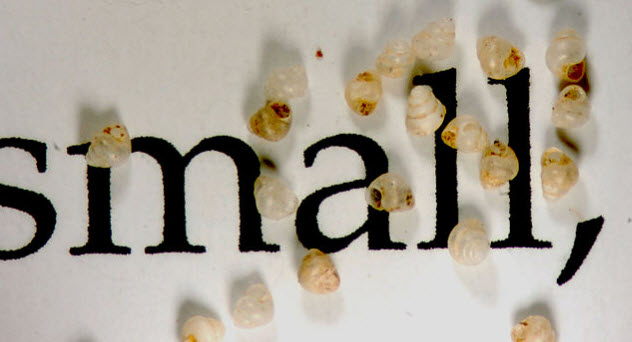 The world’s new smallest snail has a shell diameter of a mere 0.7 millimeters, dwarfing the previous trophy winner, Angustopila dominikae. These miniature beasts, called Acmella nana, are located on the island of Borneo in Malaysia and require a microscope to be seen in the wild.

These snails can help scientists to better understand how isolated species evolve in one place. They get stuck in one habitat because they move so slowly. There, they have enough time to grow undisturbed from the rest of the world.

Although they inhabit three places on the island, their delicate limestone caves are extremely easy to destroy. “A blazing forest fire at Loloposon Cave could wipe out the entire population,” explained researcher Menno Schilthuizen in an interview with LiveScience.

Quarrying the limestone hills in the area could also completely ruin the homes of these record-breaking snails as well as 47 other newly discovered species.

Although Omura’s whale wasn’t discovered recently, it deserves some recognition because it was caught on film for the first time in late 2015. Like a cryptid of the sea, Omura’s whale was mysterious and almost unknown except for some corpses that had washed up on beaches and a few specimens caught during Japanese whaling expeditions.

Until late 2015, no living specimens had ever been found. Omura’s whales are so elusive that we don’t know how many exist. Only 25 have been cataloged so far. A team of scientists led by Salvatore Cerchio of the New England Aquarium and Woods Hole Oceanographic Institution have successfully completed field observations of this marine mammal off the coast of Madagascar.

This species has often been confused with Bryde’s whale. But Omura’s whales are unique because they have smaller dorsal fins and one-of-a-kind markings on their lower jaws.

Although little is known about these creatures, researchers agree that they are tropical and probably don’t migrate beyond the western Indian Ocean. Scientists hope to study more about their population density, vocalizations, and behavior.

The hawksbill sea turtle dwells in the tropical waters of the Indian, Atlantic, and Pacific Oceans. It is probably the most critically endangered turtle species in the world. As you would expect, these sea turtles swim, eat sponges, and have beautiful shells.

Yet at least one sea turtle decided that it was tired of being an average hawksbill. A team of diving scientists in the Solomon Islands found and filmed the world’s first biofluorescent reptile.

This hawksbill sea turtle really does glow in the dark. The scientists also found a community nearby that held young hawksbills, all of which glow red. The researchers aren’t quite sure how these miraculous reptiles do it.

With their neon red-and-green coats, they appear to be radioactive and otherworldly. Although we’ve known about regular hawksbill sea turtles for quite a while, only a handful of the glowing variety have been found as of early 2016.

Biofluorescence occurs when an animal absorbs light into its body and then emits that light as a colorful glow. Numerous fish, sharks, corals, and seahorses possess this ability. They use it to attract prey, communicate with others, or deter predators.

Under ordinary light, biofluorescent creatures appear unremarkable. But their true colors shine in deeper and darker depths. Water absorbs most of the visible light spectrum. So these biofluorescent animals take the remaining blue light and use it to make themselves glow neon shades of green and red. 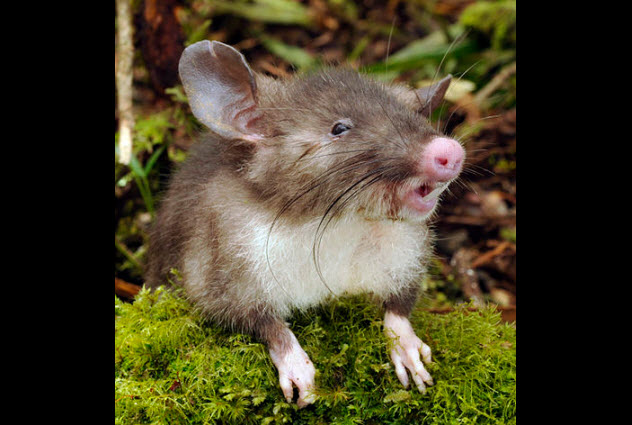 This unflattering name unexpectedly belongs to a small, relatively defenseless rodent with a face that you can’t forget. Hyorhinomys stuempkei is a rat with a large, hoglike nose that lives in Sulawesi, Indonesia.

But its most eye-catching feature is its impressively long incisors, which are big enough to compete with Dracula. The bottom teeth of this shrew rat can grow up to 19 millimeters (0.75 in). Researchers admit that they’ve never seen anything like it.

In fact, the strange anatomy of these pig-nosed rats sets them so far apart from other species that scientists have categorized them in a new genus. Their big ears are one-fifth as long as their bodies.

They have also lost the coronoid process in their jaws. This leads them to have a weak bite, which is a relief if you catch sight of their grisly fangs. Fortunately for the rodent, they don’t need to chew much when they dine on their normal meals of worms and beetle larvae.

While shape-shifting frogs can’t morph like witches or use magic spells, they are amazing nonetheless. Found in Ecuador, they can change the texture of their skin at will—from smooth to bumpy depending on their surroundings. So far, only two species are known to do this: Pristimantis sobetes and the more recently discovered Pristimantis mutabilis.

These frogs are the size of a marble, yet it is spectacular to see their skin in action. Naturalists Katherine and Tim Krynak discovered one of the tiny amphibians and kept it in a lidded cup to study later. The creature’s back had been riddled with thornlike prickles, giving it the appearance of a punk rocker.

However, once they set the frog on a sheet of paper, its skin morphed to become as smooth as the page on which it sat. Scientists aren’t sure how the frogs accomplish this feat, but their skin structures may allow water movement to change their texture.

The technique undoubtedly gives them added protection from predators by allowing these shape-shifting frogs to blend in with their surroundings, whether bumpy rocks or smooth leaves.

Australia is infamous for its wide diversity of venomous creatures, ranging from the smallest arachnid to the deadliest snake. However, there is one spider that may be cuter than all the rest.

First discovered in 2014, Jotus remus doesn’t boast a colorful design or a startling appearance. Instead, the male’s remarkable feature is the unique way in which it attracts a mate. The two front pairs of legs on this tiny jumping spider are normal enough. But the third leg on each side of its body is longer and topped with a heart-shaped paddle.

While hiding underneath a leaf, the male will raise these paddles and wave them around like an enthusiastic cheerleader to attract the attention of a female. Sometimes, the male waves his paddles for hours. If luck is on his side, the female gives chase. Then, after what seems like a game of cat and mouse, the two finally mate.

Throughout the arachnid world, courtship is famously known to be a dangerous business. If the male isn’t careful, his potential partner will turn him into a tasty meal. So male spiders like Jotus remus have developed interesting dances to convince females to give them a chance and, with any luck, not slaughter them for dinner.

For 20 years, scientists have been baffled by the appearance of strange circles on the ocean floor. These intricate geometric designs can have diameters of up to 2 meters (6 ft). Could underwater aliens be creating these wacky shapes?

Male white-spotted puffer fish wriggle in the sand to create these masterpieces in the hopes that a passing female will notice their artistic ability. The nests contain grooves to protect the eggs from predators and ocean currents.

Located around Japan, the white-spotted puffer fish looks normal, but its artistic talent is unique. This fish feeds on hard prey such as corals and crabs to stop their teeth from overgrowing.

White-spotted puffer fish are nocturnal and territorial. When their young eventually hatch, currents pick them up and sweep them far away from the nest. With luck, they will survive and create undersea pictures of their own someday.

Aoxue is a lazy writer who has accomplished nothing in her life but is well loved by her cats.