Even as many existing species of animals edge closer to extinction, hundreds of new species have been discovered and named. These new species reflect the planet’s amazing unexplored biodiversity. And with an estimated 10 million species yet to be discovered, it’s more important than ever to protect our natural heritage. 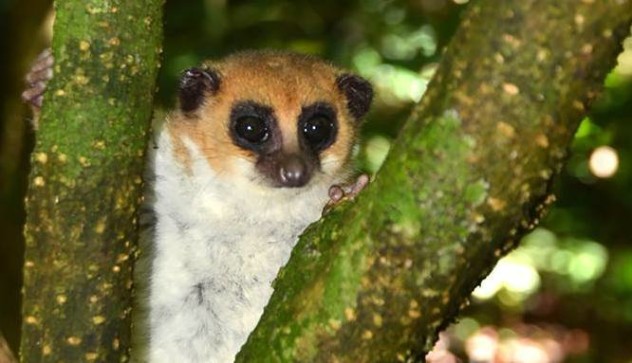 In one of the cutest discoveries of recent years, an adorable new species of reddish-brown dwarf lemur has been identified in Madagascar’s Montagne d’Ambre National Park. Dubbed Andy Sabin’s dwarf lemur (Cheirogaleus andysabini) after philanthropist Andy Sabin, the little lemurs are about the size of a squirrel and sport a long tail of around 26–27 centimeters (10 in).

The petite primates were actually first spotted in 2005, but they were only confirmed to be an entirely new species after genetic analysis in 2015. Astonishingly, that makes them the 23rd new lemur species to be discovered on Madagascar by scientists from Omaha’s Henry Doorly Zoo & Aquarium since 1999. Sadly, more than 90 percent of all lemur species are at risk of extinction and the new species is probably no exception, since its habitat is threatened by the spread of illegal slash-and-burn agriculture and the growth of the nearby town of Joffreville.

Another cute new creature is Snubby, the sneezing snub-nosed monkey of northern Myanmar. Formally named Rhinopithecus strykeri, the monkey is one of 211 new species recently identified in the Eastern Himalayas. Locals hunters told researchers about the monkey in 2010, prompting a team from Fauna & Flora International (FFI) to track down and document an example of the species.

According to the FFI report: “The monkeys have almost entirely black fur with white only on ear tufts, chin beard, and perineal area. They also have a relatively long tail, approximately 140 percent of its body length.” Their most distinctive feature is an almost nonexistent upturned nose. Locals claim that this makes the monkeys easy to find when it rains, since the water drips straight into their nose and makes them sneeze. To avoid this, the monkeys are known to sit with their heads wedged between their knees during rainstorms.

The total population of Rhinopithecus strykeri is tentatively believed to be about 260–330. And with their habitat threatened by logging and hunting, the snub-nosed monkeys have already been added to the International Union for Conservation of Nature’s Red List of critically endangered species.

Since the early 1900s, the giant tortoises on the island of Santa Cruz were assumed to be one species: Chelonoidis porteri. However, researcher Tom Fritts noticed that there seemed to be two distinct groups and asked Yale evolutionary biologist Adalgisa Caccone to investigate. In 2015, Caccone’s team revealed that the tortoises on the east side of the island were genetically distinct from the west side tortoises. In fact, both groups were more closely related to tortoises from different islands than to each other.

That posed a conundrum—which tortoise was the real Chelonoidis porteri and which was the new species? To make matters worse, the original specimen of Chelonoidis porteri was tracked down to a museum and revealed to be an extremely unusual hybrid of the two species. In the end, DNA experts decided that the west side connection to the original tortoise was stronger and the east siders were renamed Chelonoidis donfaustoi in honor of legendary retiring park ranger Fausto Llerena Sanchez. 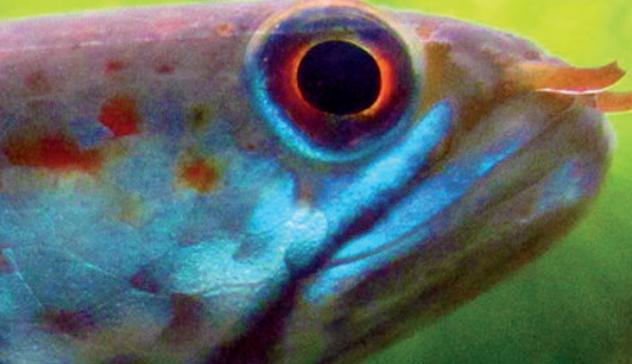 But not all of the new Eastern Himalayan species are as adorable as the sneezing monkey. Channa andrao is a species of snakehead fish boasting sharp teeth, a taste for blood, and the ability to slither on land for almost 500 meters (1,600 ft).

Dubbed “Fishzilla” by National Geographic, the vibrant blue nightmare was found lurking in the Lefraguri swamp of West Bengal’s Himalaya region in 2013. Although related to other snakehead fish, it was easily identified as a distinct species thanks to its unique color pattern and lack of pelvic fins. It is believed to be an aggressive ambush predator, skulking at the bottom of the swamp before lunging upward to snatch passing prey.

Interestingly, Channa andrao and other snakeheads are “primitive” fish and can actually only breathe air. If they can’t reach the surface to breathe they will suffer from oxygen starvation and die. The upside is that they can survive on land for up to four days, allowing them to slither along between ponds like a clumsy snake.

Disturbingly, the official World Wildlife Federation report on the species discovered in the Eastern Himalayas claims that Channa andrao can grow up to 1.2 meters (4 ft) long. Fortunately, this appears to be a typo for 12 centimeters (4.8 in), which makes Fishzilla a little less terrifying.

If Fishzilla gave you the creeps, then you might want to skip this one. A new species of wasp discovered in Southeast Asia’s Mekong Delta is so terrifying that it has officially been named Ampulex dementor after the soul-sucking monsters from Harry Potter.

To be fair, the name was picked by visitors to Berlin’s natural history museum, so it might be slightly overdramatic. But the wasp is pretty disturbing. Reaching up to 10 centimeters (4 in) in length, the red-and-black wasp preys on cockroaches by turning them into mindless “zombies.”

After landing on a cockroach, Ampulex dementor plunges its stinger into the unfortunate bug’s abdomen and injects it with venom. This blocks the cockroach’s ability to process the neurotransmitter octopamine, causing it to lose control over its mobility and submissively follow its attacker. The wasp them uses its antennae to guide the cockroach to a safe location to be devoured.

Sadly, the Mekong Delta is considered one of the most threatened environments in the world and conservation groups warn that we may not have much time left if we want to save the increasingly endangered dementors. 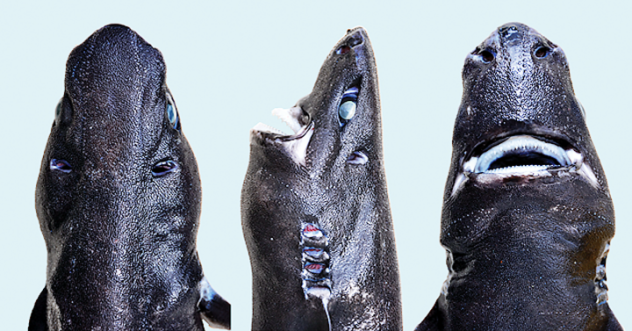 The ninja lanternshark might sound like it was named by an eight-year-old, but that’s unfair. It was actually named by two eight-year-olds. Researcher Vicky Vasquez was describing the recently discovered shark to her young cousins when they proposed the name “Super Ninja Shark.” Vasquez subsequently proposed a modified version of the name as a way to “get people excited” about the new shark. Since you’re currently reading about it, the plan seems to have worked.

And the shark definitely deserves its cool name. Discovered by researchers from the Ocean Science Foundation, the ninja lanternshark grows up to 0.5 meters (18 in) long and is the first lanternshark species to be discovered off the Pacific coast of Central America. Like other lanternsharks, the new species can glow in the dark via tiny cup-shaped organs called photophores. However, while other lanternsharks have photophores all over their bellies, the new shark has a smaller number of photophores concentrated on its head and doesn’t glow as brightly as other species. That, combined with their sleek appearance and stealthy movements, reminded the researchers (and their young cousins) of “the typical outfit and stealthy behavior of a Japanese ninja.”

“This new amphibian looks like something out of a bad monster movie. It was as long as a small car and had hundreds of sharp teeth in its big flat head, which kind of looks like a toilet seat.” With these stirring words, the University of Edinburgh’s Steve Brusatte recently announced the discovery of a fossilized species of salamander-like amphibians, which roamed the Earth 200 million years ago, preying on early dinosaurs.

Named Metoposaurus algarvensis after its discovery in the Algarve region of Portugal, the ancient amphibian lived in lakes and rivers during the Late Triassic period. Although related to modern salamanders, Metoposaurus algarvensis was more like a crocodile, feeding mostly on fish, but doubtless happy to snap up any dinosaur that strayed too close to the swampy water it lurked in.

According to Brusatte, monster amphibians like the saurian-snacking super salamander were common at the time, but “perished in a mass extinction about 201 million years ago, when the joined continents split apart. And with a few exceptions, the meeker amphibians inherited the Earth.”

3The Roundworm Of Many Faces

Specifically, the roundworms had five distinct mouth shapes. Since the mouth is one of the roundworm’s few distinguishing features, that essentially gave them five very different “faces.” But after the genetic sequencing was carried out, the researchers realized that the worm could simply develop five different mouths based on the specific niche they occupied in the ecosystem of the local fig. Some mouths are better for consuming yeast, while others are designed to feed on bacteria.

Named Pristionchus borbonicus, the roundworms represent an extreme example of evolutionary divergence within one species. However, researchers still aren’t sure how this came about or how the worms contribute to the ecosystem of a fig (although we do know that they ride from fig to fig on board local fig wasps). As such, MPI is already planning a follow-up trip to Reunion.

2The First Frog To Give Birth To Tadpoles 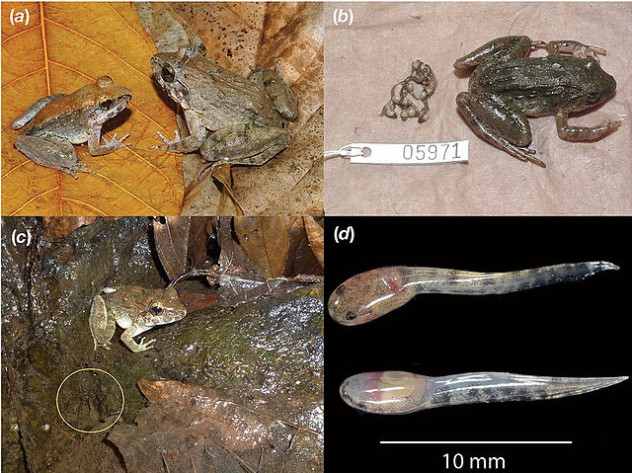 In the summer of 2014, herpetologist Jim McGuire was on the Indonesian island of Sulawesi when he spotted a strange fanged frog. When he picked it up, the frog “squirted tadpoles all over my hand.” Naturally, McGuire was delighted. After all, no other frog known to science gives birth to live tadpoles, making the Indonesian amphibian a unique new species.

Dubbed Limnonectes larvaepartus (“marsh swimmer that gives birth to larvae”), the frog gives birth to tadpoles directly into pools of water deep in the rain forest. In most other frog species, the female lays eggs and the male quickly fertilizes them. Some frog species do give birth to miniature froglets that have “already passed through a modified tadpole stage while still in an egg capsule inside the female.” But Limnonectes larvaepartus is the only frog known to give birth to tadpoles themselves.

In 2015, the International Institute for Species Exploration listed Limnonectes larvaepartus as one of the “Top 10 New Species” discovered in 2014.

1A New Species Of Human 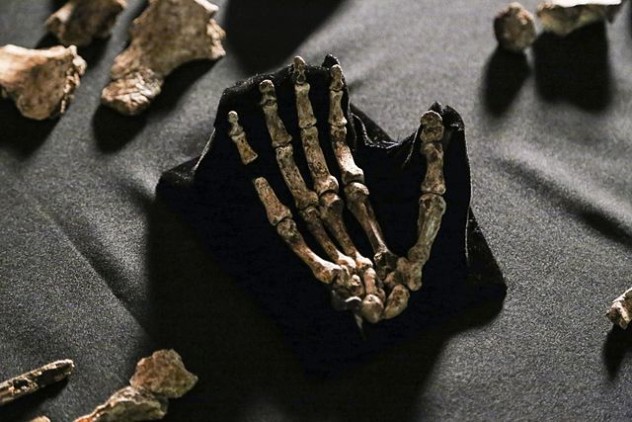 These days, Homo sapiens are the only species of human hanging around. But that wasn’t always the case and scientists recently announced the discovery of a new species of early hominid. Recreational spelunkers Steven Tucker and Rick Hunter were exploring a South African cave system known as Rising Star when they decided to squeeze into a narrow fissure in the floor. That led them to a small cavity containing 15 partial skeletons of both males and females of varying ages, representing one of the most important archaeological finds in recent history. Homo naledi was formally described by a team of international scientists in September 2015.

According to the scientists, Homo naledi had many similar features to modern humans, including a progressive skull shape, small teeth, long legs, and almost entirely modern feet. On the other hand, the species had a tiny brain (the size of a gorilla’s), apelike shoulders, and primitive fingers. Experts believe that the species could possibly be the first example of the genus Homo and may have lived in Africa up to three million years ago.

The find was even more remarkable because the skeletons were clustered together deep inside the cave system. That suggests that Homo naledi might have used the deep cave as a burial chamber, perhaps over generations. Ritual behavior like ceremonial disposal of the dead had previously “only been associated with much later humans within the last 200,000 years.”

Perhaps the most intriguing part of the discovery is how it almost didn’t happen. As National Geographic put it: “If we learned about a completely new form of hominin only because a couple of cavers were skinny enough to fit through a crack in a well-explored South African cave, we really don’t have a clue what else might be out there.”

Amy Daher is a freelance writer and translator. Please send your constructive criticism to her email address.