Not many people know much about Mongolia apart from that Genghis Khan was from there. This is unsurprising given the impact of the Khan and his descendants on the world, but the story of Mongolia goes far further.

10Mongolia Is One of the Oldest Countries in the World 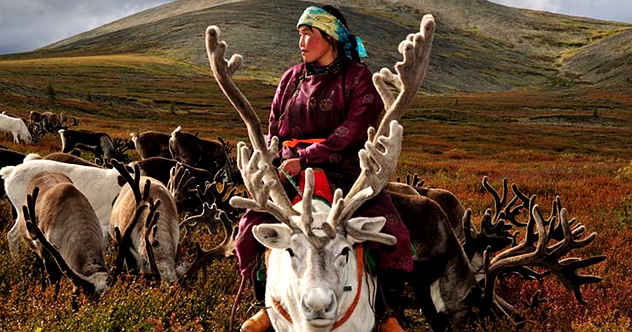 The Xiongnu people who lived north of the Great Wall were a pastoral, nomadic sort. This didn’t prevent them from organizing into a nation a full three years before the founding of the Han dynasty in 209 B.C. After a lengthy period of these early Mongols whipping the early Chinese all over the place, peace finally broke out in 162 B.C. Emperor Wen of the Han is the first to formally recognize Mongolia as an independent power:

“As the Xiongnu live in the northern regions, where the cold piercing atmosphere comes at an early period, I have ordered the proper authorities to transmit yearly to the Shan Yu (the king), a certain amount of grain, gold, silks of the finer and coarser kinds, and other objects. Now peace prevails all over the world.”[1]

Of course, it wasn’t until Genghis Khan united all the tribes that Mongolia, as we understand it today, began to take shape, but the people and cultures were present 1000 years before his reign. 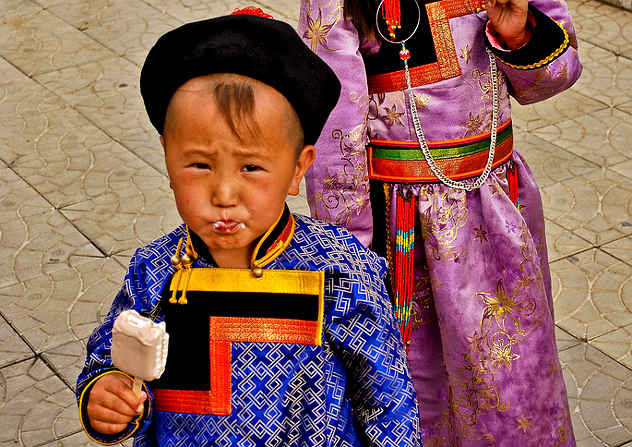 Mongolia can get pretty cold—cold enough, in fact, that the ice cream sellers today can happily hawk their wares directly from cardboard containers, with no need for a freezer. The story goes that, sometime before Marco Polo returned to Italy with the delicacy, horsemen on a long journey across the Gobi desert in winter carried with them cream, in containers made of animal intestine. As they rode, the liquid cream was shaken vigorously in the sub-zero temperatures, causing the cream to freeze and be mixed all at once.

It is unknown as to whether the Mongols had Rocky Road or ate ice cream while crying after being dumped for a better horseman. What we do know is that when the Mongol Empire expanded and conflicted with the Chinese, ice cream followed in their footsteps, allowing Polo to nick the idea—and for Italians to proclaim how clever they are for centuries afterward. 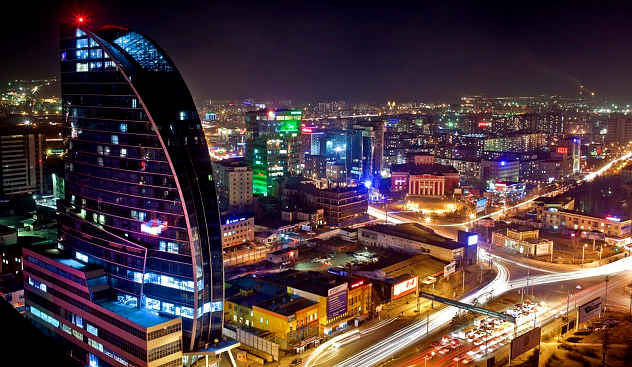 For almost 150 years, Ulaanbaatar was a mobile capital. As one might expect of a people with millennia of nomad lifestyle, sitting around in one place was pretty boring. So, when the Khan moved, so did his entire city. Originally known as Örgöö (translated as Palace-Yurt) the city moved 25 times before finally settling at the meeting of the Selbe and Tuul Rivers. The reason for the permanent settlement is likely to be that the city just got too big to shift easily. According to Scottish traveler John Bell in 1721:

“What they call the Urga is the court or the place where the prince (Tusheet Khan) and high priest (Bogd Jebtsundamba Khutugtu) reside, who are always encamped at no great distance from one another. They have several thousand tents about them, which are removed from time to time. The Urga is much frequented by merchants from China and Russia and other places.”[2]

By the time the city finally put down roots, it is estimated that as many as ten thousand monks inhabited the temples. 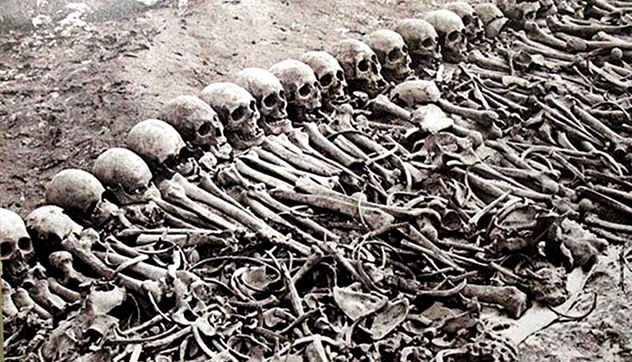 It certainly seems that almost every country on Earth has a few million skeletons in the closet, and it would be remiss to neglect to mention the contribution to the noble art of exterminating humans of the great Khan. Second only to the Armenian Genocide for unmechanized mass killing (see our article on Armenia for details), the Mongols posted a high score unmatched by any before the advent of firearms and chemical weapons.[3]

At the Persian city of Merv, Genghis defeated his enemies, but the people still refused to submit. So he led them all outside, which took 13 days, and then each of his warriors was instructed to kill 400 of them. Historians put the death toll in excess of a million people. 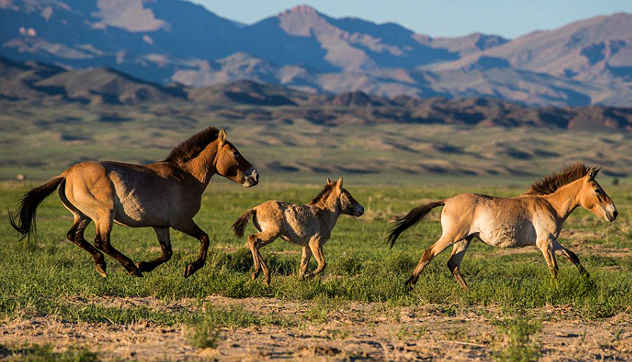 Przewalski’s horse, named after the Pole who “discovered” the breed in the 19th century, is known in Mongolia as the Takhi. Because of their rarity, and humans being kind of monsters, the horse was driven to near extinction in Mongolia as really smart people rushed in to catch the horses for zoos and things. Cool! It gets better.[4]

At the start of World War II, Kazakh soldiers fleeing the Chinese army were starving and freezing to death. So they ate whatever they could find, including lots of Takhi. Subsequent freezing winters (-40c) and boiling summers (+40c) and an explosion in the indigenous wolf population finished off the last Takhi by 1968.

Fortunately, the Western European horse collectors had inadvertently saved the species, and in 2004, twelve of these rarest of horses were re-introduced to Mongolia. Today, 300 live wild there, in addition to an unknown number who have taken up residence in the Chernobyl Exclusion Zone, and to be honest, who is going to want to go and count those ones. They have probably got two heads and are eating meat by now. If ever there is a land that proves that not all systems work in all nations, Mongolia is it. After being tied onto the USSR in 1924, becoming the world’s second Communist state, Mongolia had a degree of autonomy. This was allowed for a few reasons. The leader of Communist Mongolia was a Stalin devotee. China was on the southern border, and trade and diplomacy could easily be run through the Mongolians.

After Perestroika, the Mongolians decided to give this newfangled democracy a try, but apparently haven’t enjoyed the experiences granted by neoliberalism. The Mongolian People’s Party won a landslide in the 2016 elections, although they run on a platform stripped of hardline communist policies.

Despite fears of social repression, Mongolian politician Nambariin Enkhbayar insists that his communists are a different breed. “These are not some monsters that have come to power but people who speak the same language,” he said. “We just want to live in a civilized, developed and democratic society.”[5] 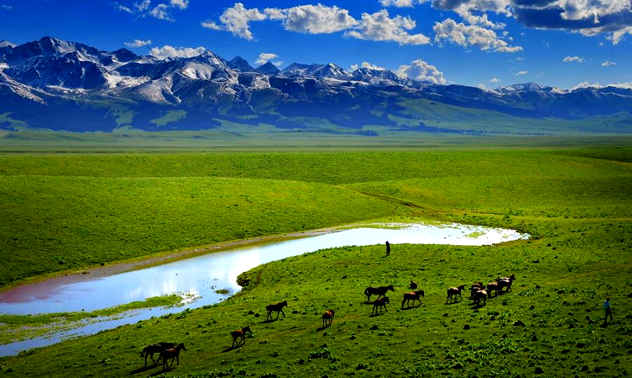 With just two people per square kilometer, Mongolia is a great location for recluses, hermits, antisocial weirdos, and writers for Listverse, who are usually reclusive, antisocial, weirdo hermits. The only problem is what to do about That Other Guy in your square kilometer. Kill him? Leave him to freeze to death in -30 degree winters? Chase him away on your Battle-Yak? The choice is yours.[6]

Fortunately, the neighbors are quite friendly when you can find them. It is a tradition in Mongolia to always have warm, slightly salted milk tea in case of visitors, which makes sense because it can be a long way to the next ger (nomadic tent). Imagine trying to borrow a cup of sugar. Just outside Ulaanbaatar, sits a 131-foot tall statue of Genghis Khan. We can understand why, he did found the country—but he also killed millions. It would be kind of like finding a Statue of Lenin in Seattle. Sure, everyone in the area thinks the guy is cool, but . . . the mass murdering is problematic, surely.

Anyway, we must, of course, remind ourselves that the 12th century was a very different time, and shooting bows from horseback is just too cool to ignore. So, an hour from the coldest capital city on Earth, you will find the tallest statue of a horse anywhere on the planet.[7]

“All Mongolian people are proud of this statue,” said Sanchir Erkhem, 26, a Mongolian sumo wrestler living in Japan who was posing for photographs on the platform during a trip home in 2009. “Genghis Khan is our hero, our father, our god.”
“He was a cruel man but he led our country to greatness,” said Toguldur Munkochir, 25, “If you look at Lincoln, Hitler, and Julius Caesar, it’s kind of the same thing.”

2The Weirdest Rally on Earth Forget gumball or Paris-Dakar. Forget Wacky Races. The wildest race on Earth is from wherever you are right now to a pub in Mongolia. The rules are odd—your engine must be less than one liter unless you are in a comedy vehicle. Like an ambulance or something. You can ride a motorbike, but it has to be less than 125cc.[8]

For comparison, when film stars Ewan McGregor and Charlie Boorman traveled across Mongolia, they did it on all terrain BMW bikes with ten times the power, and they still nearly failed to cross the country.

In short, if you take part in the Mongol Rally, you are insane and deserve to die. Which, surprisingly, only two people have since the start of the competition in 2004. On the upside, the rally has raised millions of pounds for charity, so that’s nice. For those of us who are unfortunate enough to live in so-called modern countries, there are few things more romantic than the sight of the Kazakh people in Mongolia hunting with eagles—Golden Eagles, at that. The massive birds have been tamed and hunted with by the peoples of the steppes for over 4500 years. As an example of the enduring power of tradition and culture, it is incredible.[9]

An anecdotal story runs as follows: A hunter reunited with his one-time eagle, honorably discharged after eight years of service. Years after her release, the hunter was out riding with his friend, and they looked up and saw two eagles circling high overhead. The hunter said, “that’s my eagle.” His friend scoffed, but the hunter gave a high-pitched whistle and, sure enough, the bird came down and landed right on his arm!

Read more about Mongolia on 10 Brutal Moments In The Conquests Of Genghis Khan and 10 Dark Secrets Of The Mongol Empire.