Some classic paintings have surprised us with their “secrets”—forgotten paintings and images concealed for centuries until restoration techniques or new technologies revealed them. Surreal but true, these discoveries have left the art world breathless. 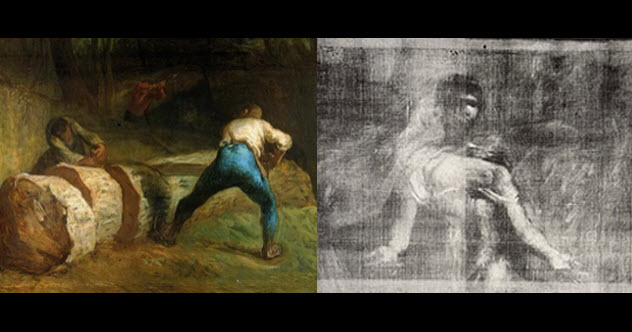 Using infrared reflectography, an image of a head was exposed above the left shoulder of one of the men in Jean-Francois Millet’s The Wood Sawyers. With further assessments and thorough scanning, the other parts of the hidden image were completely revealed. It was the figure of the famous French statue La Republique.

Alfred Sensier, the artist’s biographer, later confirmed that this image was originally created as an entry for a certain state competition. Unfortunately, it didn’t earn a prize in that contest. So Millet painted The Wood Sawyers over the original picture. He reused the same canvas simply to save money.

Other details found by the scan were some folded parts, tears, and dark holes in the hidden image. These were probably caused by adjusting the original canvas to its new size.

Whale tale: a Dutch seascape and its lost Leviathan

The painting View of Scheveningen Sands was created by Hendrick van Anthonissen around 1641 and donated to Fitzwilliam Museum in 1873. The painting depicts an innocent scene of a calm beach in winter with clusters of people gathered for no apparent reason. Yet the picture still seemed normal.

When a student conservator was tasked with removing a yellowing patch of paint, she discovered the painting’s peculiar secret. On the horizon of the ocean, a figure emerged next to a shape that resembled a sail. After further cleaning, the conservators found a picture of a stranded whale. The “sail” turned out to be the whale’s fin.

There was no indication that the van Anthonissen painting featured a beached whale when the museum acquired it. Later analysis suggested that the paint used to conceal the animal was applied in the 18th or 19th century.

Experts believe that the whale was concealed because the picture of a dead animal was considered offensive in the 18th and part of the 19th centuries. Without the whale, the painting was probably more salable.

8 A Peasant Woman
Patch Of Grass 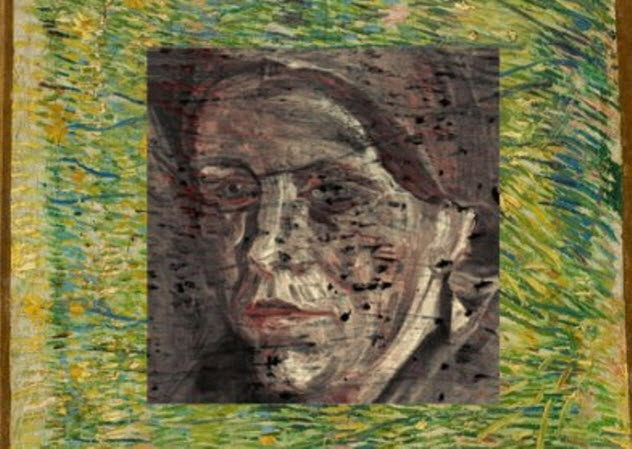 Vincent van Gogh, an artist with a tragic life story whose works are quite valuable today, painted his masterpiece Patch of Grass in Paris in 1887. However, scientists from the Netherlands and Belgium have revealed a forgotten portrait hidden behind this painting.

Although the final painting is composed mostly of blues and greens, the portrait is done entirely in brown and red. It was discovered in 2008 with the help of an advanced color mapping technique done with fluorescent X-rays. The details show an image of a woman who appears to be a peasant. Her identity is unknown.

According to art experts, van Gogh often recycled his canvases to save money, which explains why this image remained covered and forgotten. 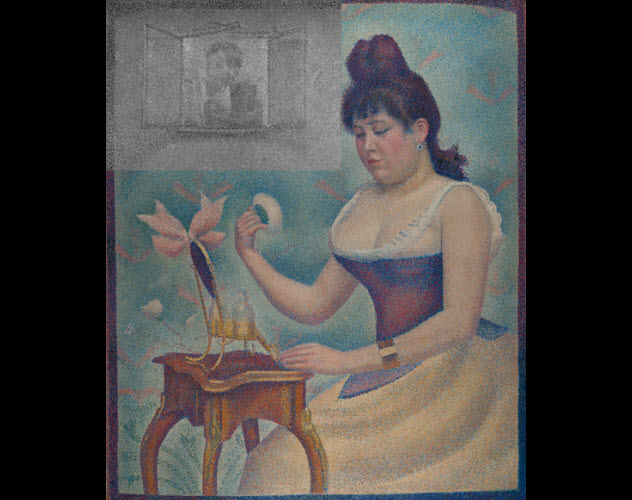 Photo credit: George Seurat via The Courtauld Institute Of Art

To save his dignity, George Seurat intentionally covered up part of his controversial painting Young Woman Powdering Herself. The painting depicts a young woman vainly applying makeup.

The woman was model Madeleine Knobloch, Seurat’s mistress. The background of the painting is a detailed room with several items on display. One of those items is a mirror in the wall that reflects a vase of flowers on a table. Seurat concealed his self-portrait beneath the mirror.

Recent technical examinations have proven that Seurat added the reflection of the flowers to cover his own reflected image. Before the painting was displayed, Seurat had supposedly asked a friend for his opinion of the picture.

Unaware of the illicit affair, his friend commented that the portrait in the room was comical. Seurat then decided to cover his self-portrait to keep his affair secret. 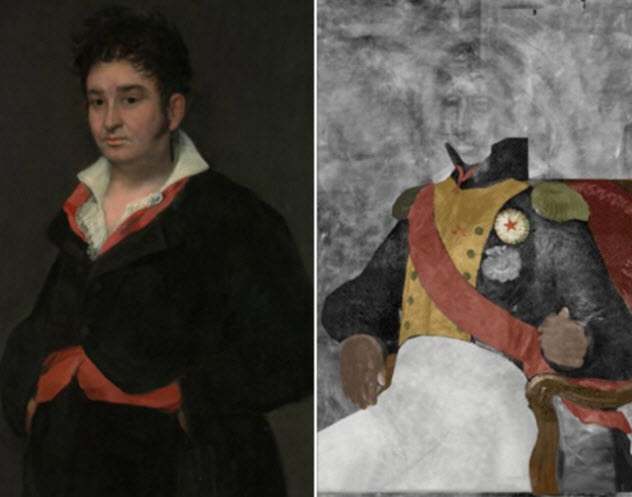 An unfinished portrait of a man in a formal uniform was discovered when scanning underneath the Portrait of Don Ramon Satue by Francisco de Goya. The details of the face were not completed, so the man is still unidentified. But that hasn’t stopped the speculation about who he is.

The embellishments on the uniform were only used by the highest-ranking men of a chivalric order created by Joseph Bonaparte, who was appointed king of Spain by his brother, Napoleon Bonaparte. Historically, only Joseph and 15 other generals were entitled to wear this type of uniform. Experts haven’t narrowed it down any further.

Joseph Bonaparte’s reign as king lasted from 1808 to 1813. After the ruling party was driven out, Goya continued as the court painter for the new king. Goya probably painted over the man because it would have been dangerous to depict someone in the old regime with a new monarch in power. 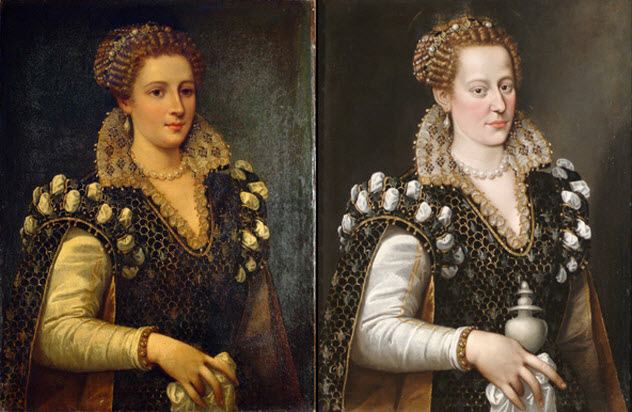 After some experts doubted the authenticity of Isabella de’ Cosimo I de Medici, a conservator at Carnegie Museum in Pittsburgh did a detailed examination of the 16th-century portrait of the Italian noblewoman.

Ultimately, the painting was found to be authentic, but the museum experts were still in for a surprise. Through the top layer of cracked paint, they found another painting with the real face of de Medici.

Apparently, the painting had undergone a drastic makeover in the 19th century that made the noblewoman look much younger and prettier. For centuries, people have been fooled into believing that de Medici looked like that.

The original painting revealed an older woman with a wrinkled face and large, unattractive hands that the 19th-century restorer decided to change. Experts have already confirmed that the hidden painting was the real appearance of de Medici. They believe that the painting was altered to make it more appealing and marketable. 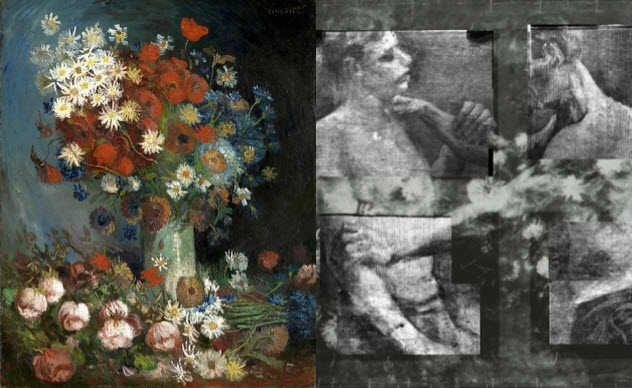 Since 1974, there have been questions about whether Vincent van Gogh actually painted Still Life with Meadow Flowers and Roses. Experts have studied its format, its composition, and even the location of the signature.

They concluded that too many details of this painting didn’t match those of van Gogh’s other works. With its authenticity in question, the painting was ultimately removed from van Gogh’s catalog.

It was only when the image of two wrestlers was discovered beneath the painting that the work was deemed to be a real van Gogh. Art experts knew that van Gogh had once drawn images of wrestlers and painted over them when he reused his canvases.

After 10 years of careful research—including a study of the pigments used by the painter—the image of the wrestlers was declared a complete match with van Gogh’s work. Van Gogh had also mentioned the picture of the wrestlers in an 1886 letter: “This week, I painted a large thing with two nude torsos—two wrestlers.” He added that he was delighted with the results.

When John Singer Sargent’s Madame X was first exhibited at the Salon of 1884, it became a subject of controversy and disapproval by many guests and contemporary commentators. At that time, the painting was considered indecent because it featured a fair lady in a simple black gown with one strap falling off her right shoulder in a suggestive manner.

The lady in the painting was Madame Pierre Gautreau, an expatriate from New Orleans who had made a name for herself as a great beauty in Parisian society. Eventually, her humiliated family demanded that the portrait be removed from the exhibition.

Fearing that his painting would be taken from him and destroyed by the Gautreau family, Sargeant decided to alter the painting and draw the strap in its proper place.

As of early 2016, the portrait is displayed at the Metropolitan Museum of Art, where the previous version was uncovered.

2 A Secret Prostitute
Woman At A Window 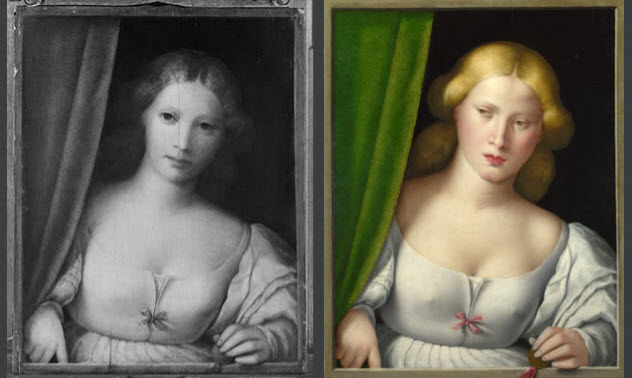 Like Madame X, Palma Vecchio’s Woman at a Window was drastically altered to adjust to the sexual and moral norms of society at the time that it was painted. A planned restoration revealed the painting’s secret when a supposedly damaged underlayer was discovered to be in good condition. It was merely hiding something.

Restoration reports show that the woman in the painting actually had rich blonde hair. Her jawline had been adjusted and her nipples covered. Her eyes, which could have been the most expressive part of the portrait, had also been altered. These changes almost made the subject an entirely different person.

In the original image of the woman, her more prominent breasts, distant stare, and appearance by the window implied that she might have been a prostitute. This explains why her mere presence was socially unacceptable and had to be altered in the painting.

1 The Other Women
Mona Lisa

Of all the popular classic paintings, the Mona Lisa is arguably the most well-known to the general public. Her enchanting, mysterious smile has made her famous in the art world.

The identity of Mona Lisa has been debated for centuries. Most believe that she was Lisa del Giocondo (aka Lisa Gherardini), the wife of a Florentine merchant. But a recent discovery may shatter that belief.

Two other portraits have been found beneath the Mona Lisa painting. One of them is believed to be the real Lisa. Pascal Cotte, the French scientist who discovered and reconstructed the other two images, noted that the results may destroy many myths and alter our vision of Leonardo da Vinci’s masterpiece.

However, other art historians are not convinced. They argue that the hidden images simply show da Vinci’s creative process as his painting evolved into its final form. As of early 2016, representatives of the Louvre Museum in Paris have not publicly commented on the situation.

J.M. Riennard is a budding writer. He finds passion in arts, music, and literature.