When people hear the word “clone,” they are most likely envisioning Dolly the sheep or a scene out of a trippy sci-fi film. In reality, cloning happens every day in nature. Many plants reproduce asexually (without sex) and create carbon copies of themselves. However, there are some interesting critters in the animal kingdom that do the same thing. 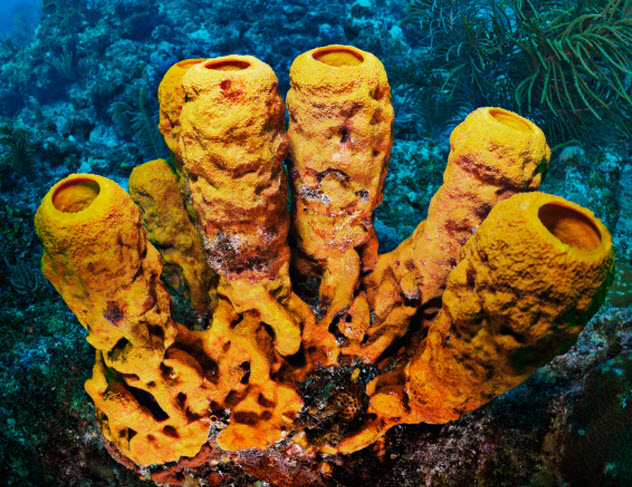 The usually sedentary but often colorful sea sponge has incredibly simple anatomy. Regardless of size, each organism is composed of a mass of cells and fibers without any true organs.

The fact that such a simple animal has the capability to clone itself is rather remarkable. Sponges can duplicate themselves through a process called gemmulation.

Gemmulation starts with the formation of gemmules—groups of cells that are enclosed in a protective casing. When each gemmule is provided with a food supply, it is moved to the surface of the sponge and ejected from the adult. From there, it will mature into a new sponge.

Even more amazing is the ability of the sponge to regenerate due to injury or predation. If part of the sponge is broken off, that part can survive on its own. It will grow into a completely new sponge that is genetically identical to the parent sponge. 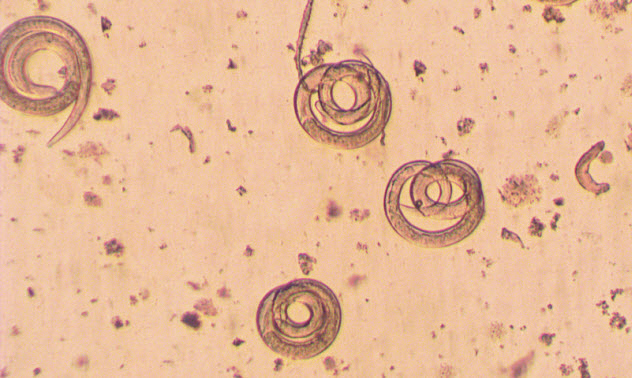 Parasitic tapeworms also possess the power to replicate themselves. Both humans and animals run the risk of harboring and becoming infected with these long, flat worms. People who like their meat on the undercooked side increase their chances of becoming infected.

Once inside the human body, the tapeworm matures into an adult. When the adult reaches the reproductive stage of its life cycle, it detaches a rear segment of its body called a proglottid.

The proglottid, which is ripe with eggs, passes out of the body and is eventually ingested by another grazing animal. The result is a multitude of cloned tapeworms that will infect other unsuspecting victims. Tapeworms are even more dangerous because most people don’t know when they’re infected, which allows the parasites to spawn a clone army of worms.

Avid gardeners are probably well acquainted with the pesky aphid, a soft-bodied insect. Like moths to a flame, aphids are drawn to soft leaves, drawing out and feeding on the sap of the unlucky plant.

Aphids are masters of self-replication because they are capable of asexually reproducing all year long—up to 12 young a day. The nymphs (immature aphids) shed their exoskeletons about four times before reaching maturity. In warm weather, 80 clones from one aphid are possible.

After laying their eggs, the adults essentially seek and destroy, moving on to other plants to devour. Once aphid populations have become severe, they can cause obvious discoloration and distortion of leaves, attract unpleasant fungus, and even spread plant-based viruses. Aphids are also crafty in that they are hardly noticeable until the fungus—called sooty mold—starts to materialize.

And jellyfish are born: scyphozoa strobilation

Both beautiful and deadly, jellyfish exhibit a rather complex life cycle because they are able to reproduce sexually as well as asexually. These multitalented creatures are called medusae at adulthood.

During spawning season, each medusa releases either sperm or eggs. In most species, the eggs are fertilized in open water. Once the young jellyfish finds a suitable spot to set up shop, the cloning begins.

At this point, the polyp begins to reproduce asexually via budding. Basically, the polyp divides itself in half, which produces a genetically identical twin. In another species of jellyfish, the polyp reproduces through strobilation. In strobilation, the polyps split into a number of segments that mature into adult medusae when released.

A recent marvel, the marmorkreb (German for “marbled crayfish”) astounded scientists after it was discovered that the sea creature reproduced without mating. Making history, the marbled crayfish is the first crustacean of its kind to clone itself by reproducing asexually. Through a process called parthenogenesis, the marmorkreb produces an egg that develops without fertilization.

These animals were discovered in the European pet trade during the 1990s. Afterward, it was found that the lineage of the crayfish was entirely female. Since then, there has been great concern that the marmorkreb is becoming an invasive species. The marmorkreb‘s ability to clone itself without mating creates self-sustaining populations when they are released into the wild.

Recent studies suggest that the marbled crayfish is related to Procambarus fallax, another species of crayfish which reproduces sexually. It is still unclear as to where and how the marmorkreb originated, but its numbers continue to grow.

In a rare moment in scientific history, a female boa constrictor gave birth to two litters of young that have no trace of male DNA in them. Even more incredible is that both litters (22 snakes in total) retained the rare color mutation that the mother constrictor exhibits.

As the young were produced through parthenogenesis, the entire litter is female. Normally, female snakes exhibit ZW chromosomes and males express ZZ chromosomes. In this instance, however, all of the snakes in the litter expressed WW chromosomes, which has never been seen before. The snakes are considered “half-clones” because they carry the WW chromosomes.

The researcher who made the discovery speculates that the new finding will change the way that scientists look at how reptiles, especially snakes, reproduce. 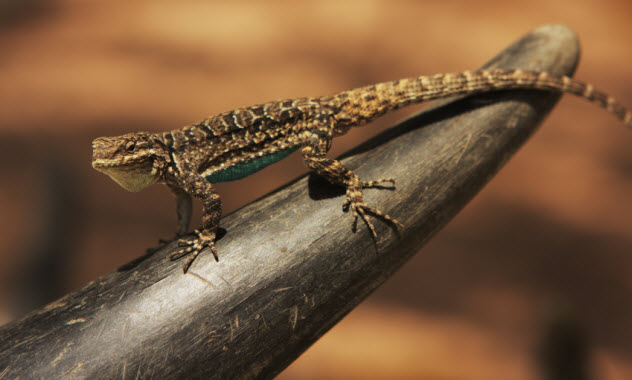 One of the distinguishing features of the whiptail lizard is its namesake tail, which can grow to a length of 30 centimeters (12 in). Like some other species, the whiptail can reproduce asexually. But what’s even more fascinating is why.

A recent study revealed that certain species of animals can reproduce asexually if necessary but some whiptail species do it because they have no choice. It is reported that these parthenogenetic lizards have twice the number of chromosomes as other whiptail species.

This oddity makes it easier for the female to reproduce without needing the male’s genetic material. The result is all-female offspring carrying chromosomes that were paired from the mother alone.

Although the reasons why whiptails have twice as many chromosomes are still not fully understood, the reproduction of whiptail lizards allows the species to populate a habitat more easily than if male and female species were present together.

Gall wasps are a truly resourceful group of insects. These wasps are particularly skilled at laying their young on virtually every major part of a plant or tree. The wasp uses the ovipositor on its rear end like a drill to burrow downward and implant the eggs directly into the chosen part of the plant.

This action stimulates an increase in the production of the plant’s growth hormones which triggers the formation of a gall. A gall is an abnormally shaped structure made up of oversized cells of plant or organ tissue at the site of implantation. It is these galls that house and facilitate the growth and development of the young wasps until they are ready to enter the world on their own.

Since the females reproduce asexually, the unfertilized eggs mature into clones of the mother without the assistance of male sperm. With male gall wasps so rare, there are many female gall wasps prowling about and waiting to impregnate other plants with their clones. 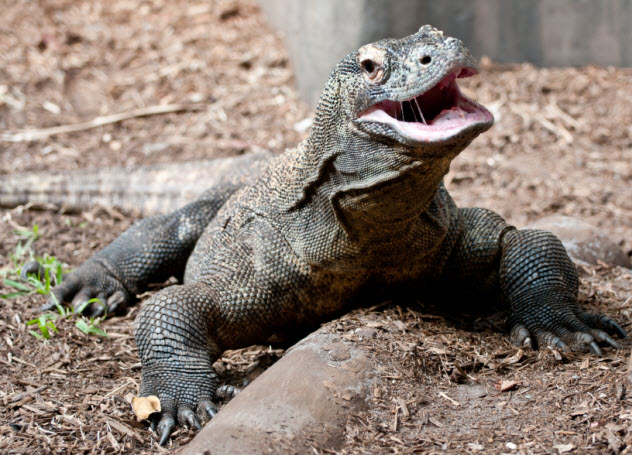 In 2006, something astonishing happened: A monitor lizard (aka a Komodo dragon) gave birth to four pups at London Zoo. Even more extraordinary is that another dragon was expecting to give birth to eight additional babies that year.

Both mothers were held in captivity, and both mothers reproduced asexually. Until this point, Komodo dragons had never been known to reproduce without male participation.

After conducting tests on the young males, it was confirmed that the babies were not an exact genetic match with the mother. Instead, the mother’s DNA was doubled to create the young and showed no presence of male DNA.

Herpetologist Richard Gibson speculated that the lizards developed the ability to survive in isolated situations:

Imagine you’re a Komodo dragon and you’re living in an archipelago of tiny islands, and a female gets caught in a storm and swept out to sea, ending up on an island with no other dragons. After two or three years of waiting with no one to breed with, she spontaneously reproduces parthenogenetically.

Gibson added that the ability would eventually cause genetic problems similar to extreme inbreeding, explaining why dragons always treat virgin births as a last resort. 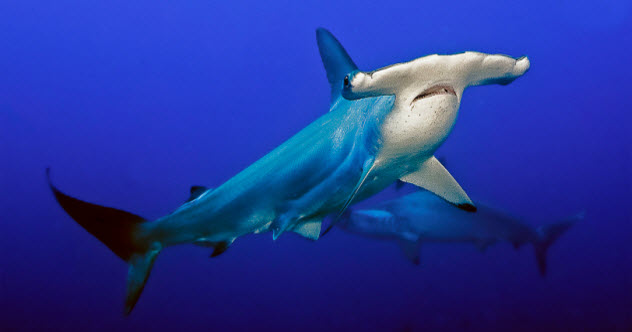 Sharks are one of the most feared sea creatures. When hammerhead sharks begin cloning themselves asexually, they become even more of a biological threat. This happened to a female belonging to a species of hammerhead sharks known as the bonnetheads or shovelheads in 2001.

American and Irish researchers made the historical discovery after a female shovelhead kept in captivity at the Henry Doorly Zoo in Omaha gave birth to a live female pup. In 2007, it became clear after extensive testing that the female pup had DNA that was identical to its mother’s DNA. There was no trace of male DNA.

Parthenogenesis is once again the culprit, although scientists say that it results in decreased genetic diversity. Sadly, the pup was killed shortly after its birth by another fish in the tank, possibly a stingray.