Insects, arachnids, crustaceans, and other arthropods have dominated our planet for nearly half a billion years. Over that time, they’ve come in an unbelievable variety of shapes and sizes. 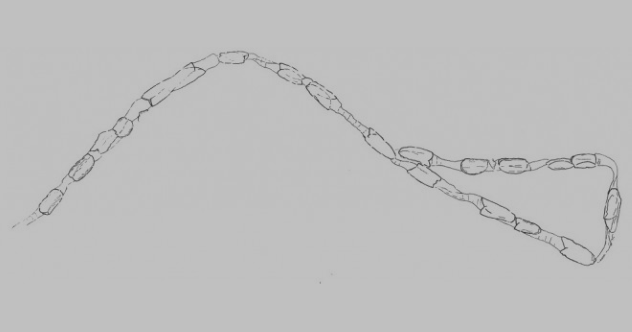 Synophalos xynos was a shrimp-like marine arthropod that inhabited Cambrian seas over 500 million years ago and exhibited a behavior unknown in any modern animal. A groove on its face could “lock” onto the tail of another of its kind, and groups of S. xynos would apparently link themselves together in long, living chains. These connections were tight enough that they often remained in a chain even when buried and eventually fossilized. They presumably swam and fed almost as though they were one long, worm-like animal. 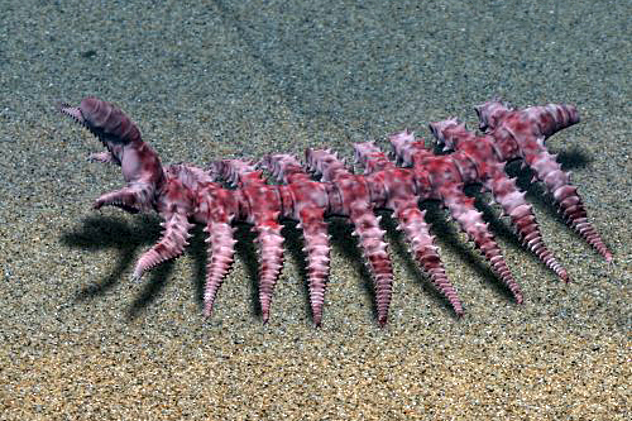 Another Cambrian sea creature, fossils of Diana cactiformis look more like wilted ferns, with many fuzzy “leaves” curling off a thin central stalk. In reality, this was a worm-like animal supported by fat, flexible legs covered in small thorns. It would have crawled along the sea floor feeding on soft-bodied invertebrate prey. D. cactiformis was a member of a group known as the lobopods, which are believed to be the ancestors of all insects and other hard-shelled arthropods. Today, the only surviving lobopods are velvet worms. 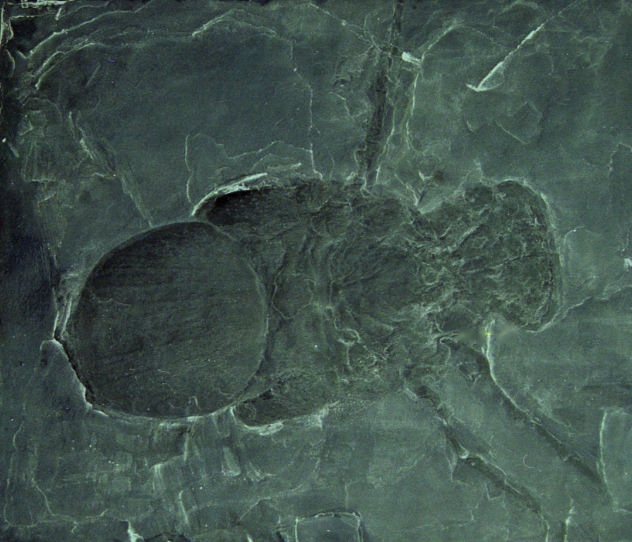 With a thick, rounded body and eight legs, Megarachne was once believed to have been the fossil of a gigantic, tarantula-like spider. If that were the case, it would have been the largest spider ever documented. Further analysis, however, has shown that Megarachne was actually a sea creature. Specifically, it was a member of a group commonly known as sea scorpions, although it was a very big, very spider-shaped sea scorpion. 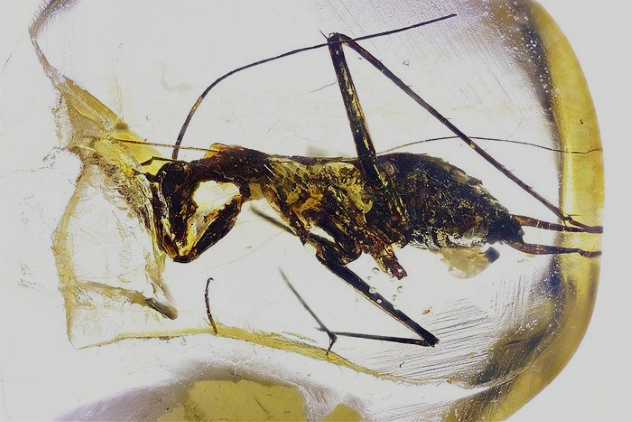 Cockroaches have been among the most successful animals on Earth since very nearly the dawn of terrestrial life, but some of the most amazing species are unfortunately no longer with us. Manipulator modificaputis was a fully predatory cockroach from the early Cretaceous, and its anatomy is closer to that of a preying mantis, featuring a swiveling head and clawed, raptorial front legs. It’s interesting to note that modern mantises and cockroaches do share a common ancestor, but it’s not M. modificaputis, which independently evolved mantis-like properties, an evolutionary experiment in roachdom that simply didn’t stick around. 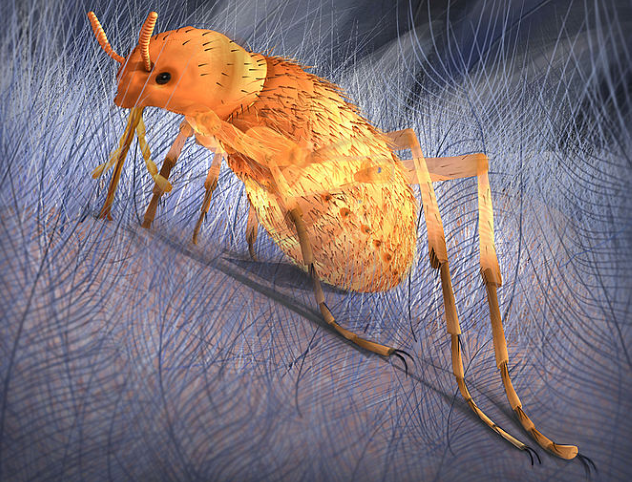 The “fleas” that fed off dinosaurs have an interestingly rocky history. For a while, insects called strashilids were believed to have drank the blood of dinosaurs and pterosaurs, until they were proven to be harmless, aquatic invertebrates. It wasn’t until 2012 that new fossils surfaced of what were almost definitely flea-like parasites from the dinosaur era, with one species dating back to the Jurassic and another to at least the Cretaceous. Nearly 2.5 centimeters (1 in) in length, these insects were flattened like bedbugs and unable to jump. They probably perched on vegetation to grab onto their hosts like modern ticks. 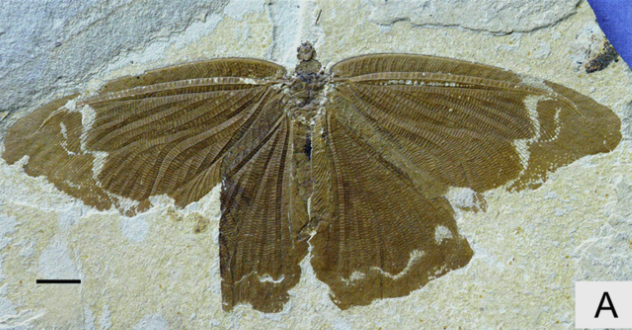 With so many organisms adapting to so many roles, evolution can often repeat itself. Just look at the similarities between sharks and dolphins, neither of which evolved from the other. Such is the case for a group of Jurassic insects which looked and lived almost exactly like butterflies, albeit millions of years before the first true butterflies ever evolved. Kalligrammatids were actually insects known today as Neuroptera, a group that now includes the lacewings, antlions, and such obscure creatures as owlflies and spongillaflies. 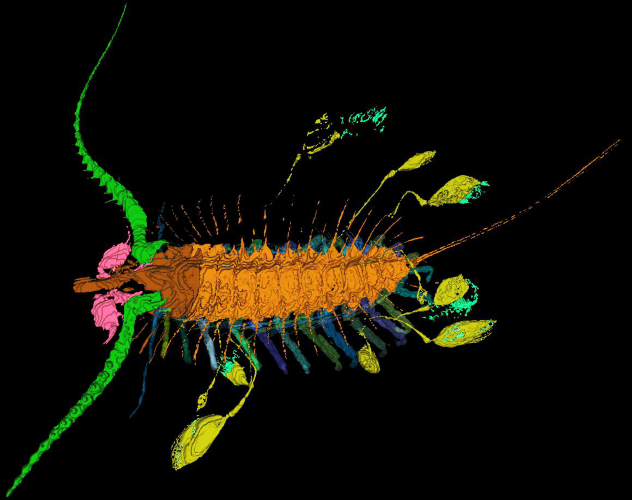 Aquilonifer spinosus was a trilobite-like arthropod that lived over 400 million years ago during the Silurian period. It’s known from only a single fossil with strange, pod-like organisms attached to its tail by thin, straight strands. At first, the possibility was considered that these creatures were parasitic, but their attachment method didn’t seem very effective for parasitism. Anatomical similarities soon revealed that these were A. spinosus‘s own young, tethered to their parent like “kites,” which may have floated behind it in the water. No modern animal carries its young in this manner, and it’s uncertain what benefits it may have presented. 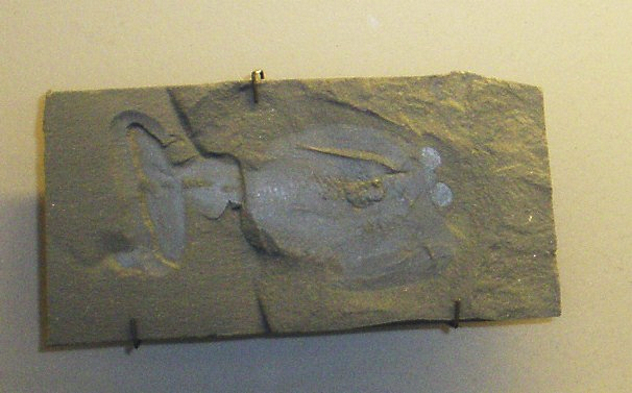 This swimming arthropod made headlines in 2015 for the perfectly preserved brain of one fossil specimen, though the rest of the animal was fairly unusual as well. With huge, protruding eyes, a barrel-shaped shell, and a three-finned tail, the creature floated and propelled itself through the water more like a fish than most marine arthropods. It’s believed have swam along on its back. 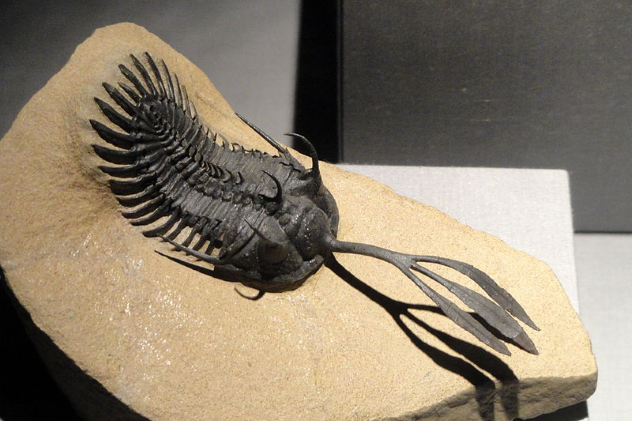 There are over 20,000 known species of trilobite, but Walliserops trifurcatus is completely unique among them, possessing three “leaves” or “spikes” on the end of a long, thin pole in the middle of its face. No two “tridents” seem to be quite the same among members of W. trifurcatus, with some even curling to the left or right and making the entire animal asymmetrical. The purpose of the appendage is completely unknown, but it could have been for attracting a mate or even wrestling with rivals, like the horns of some modern beetles.

Readers may already be familiar with Anomalocaris, a genus of 1-meter (3 ft) swimming arthropods believed to have been an apex predator of the Cambrian seas. One of its relatives, however, took a very different evolutionary course, losing its killer jaws in favor of a delicate filtration system. Though still only a few feet in length, Tamisiocaris borealis dwarfed most other animals of its time and would have been one of Earth’s first swimming filter feeders, like today’s baleen whales. Amazingly, the possibility of a filter-feeding Anomalocarid was predicted by artist John Meszaros long before any evidence of such a creature was ever uncovered.