Great Britain’s rich and colorful history has been a host to some of the best-known mysteries across the world. Just looking at England alone—the cases of Stonehenge, The Princes in the Tower, and Jack the Ripper have been endlessly analyzed and debated over the years.

As interesting as these classic cases are, however, there are plenty of other historical British mysteries that deserve a second look—from the strange death of a medieval king to a handful of unsolved Victorian murders.

10 The Assassination Of Robert Pakington 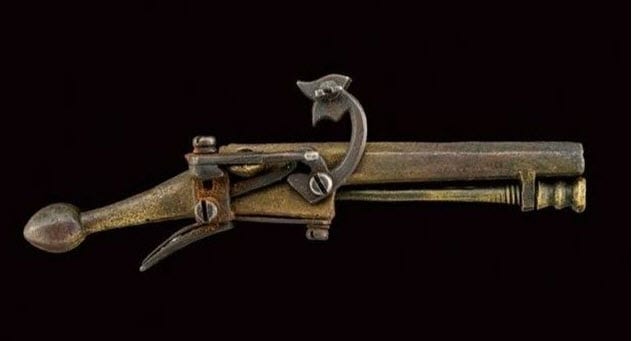 Robert Pakington has the unfortunate distinction of possibly being the earliest victim killed by a handgun in London. Pakington was a merchant with political ambitions, becoming a member of Parliament in 1533 and again in 1536. Politically, Pakington represented the interests of his fellow merchants, and he was also a critic of the Catholic clergy.

On a misty morning on November 13, 1536, Pakington woke up at 4:00 AM to go to church. The church was somewhere across from Pakington’s house. While the merchant was crossing the street, he was shot and killed. Neighbors confirmed hearing the gun, but nobody actually saw the murder or its perpetrator.[1]

Pakington’s murder shocked the city, all the more so due to the weapon used in the crime. Despite the mayor’s offer of a hefty reward, nobody was ever captured or charged. Later historical chroniclers, such as the Protestant John Foxe, tended to pin the murder on Catholic elements, with Foxe claiming that Pakington was assassinated on the orders of a priest.

9 The Murder Of Janet Rogers 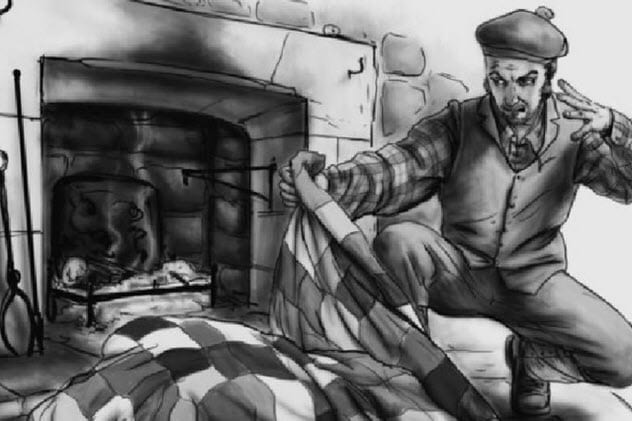 When Janet Rogers agreed to help her brother William Henderson on his farm near Perth, Scotland, it was only supposed to be a temporary job. Henderson had just fired a domestic servant, and Rogers would fill her place until another worker could be found. In March 1866, only three days after her arrival, Rogers was murdered in Henderson’s kitchen with an axe.

Henderson was the first person to find his sister’s body. Police considered the farmer a suspect, and they arrested him with one of his workers, a plowman named James Crichton. However, the possibility that Henderson was the killer was weak because he’d been at a farmer’s market in Perth at the time of the murder. Both men were eventually released, yet Crichton was later arrested again.[2]

With a lack of physical evidence, the case against Crichton was flimsy. His trial ended in an acquittal, but William Henderson never stopped believing that Crichton was the culprit. One plausible theory suggests that Crichton tried burglarizing the farmhouse, but when he stumbled on Rogers in the house, he struck her with an axe and fled.


8 The Disappearance Of Francis Lovell 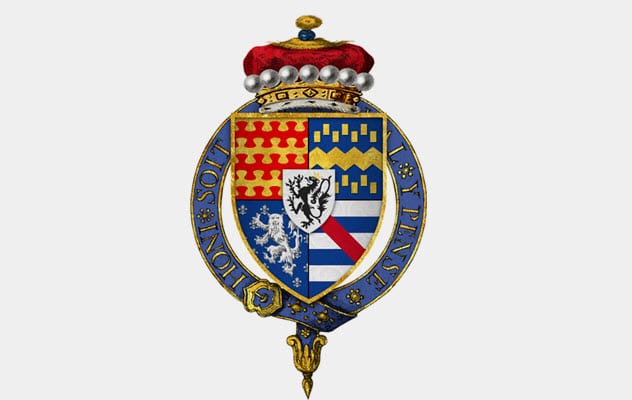 As one of King Richard III’s closest friends, the nobleman Francis Lovell was a dedicated ally during the final years of the Wars of the Roses when Richard III and his Yorkist supporters fought for the English throne with Henry Tudor and the Lancastrians. In August 1485, the civil war took a decisive turn when Richard III died during the Battle of Bosworth Field, making his rival Henry Tudor the new king, Henry VII.

Even after Richard III’s death, Lovell stayed loyal to his old friend’s cause. In 1486, Lovell came out of hiding to take part in a rebellion against Henry VII.

When that revolt failed, Lovell took up the cause of the pretender Lambert Simnel, a boy pushed by the Yorkists as King Edward VI, the “true” new king of England. During the Battle of Stoke Field, the Yorkists and their boy king were soundly defeated, and it is here that Francis Lovell disappears from history.[3]

While it’s known that Lovell escaped the battle, his whereabouts have remained a mystery. It was said that he might have retreated into a cave or perhaps fled abroad. On the other hand, he might never have left England. As a matter of fact, in 1708, a skeleton never identified was uncovered in a hidden part of Lovell’s house.

7 The Murder Of Fred Atkins 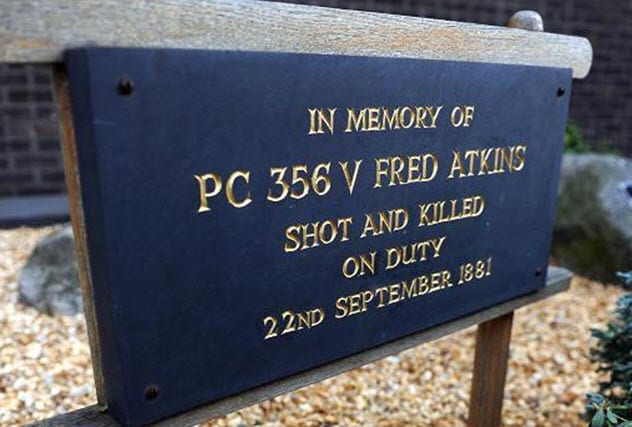 In the early hours of September 22, 1881, police officer Fred Atkins was assigned to patrol the district of Kingston Hill in London, a neighborhood then plagued by burglars. While walking his beat, Atkins was suddenly shot multiple times, taking wounds in his chest, abdomen, and left thigh. The gunshots attracted the attention of a mansion’s resident and housekeeper, who discovered Atkins lying on their front steps.

Atkins was hurt badly. But he was still able to talk, stating that he hadn’t seen or heard anybody on his beat. Unfortunately, Atkins was too fragile to move to a hospital, and the young policeman died soon after his attack. A lantern and chisel were found outside the mansion where Atkins had collapsed, and a window on the building was also missing its iron bars.

Investigators believed that Atkins must have been ambushed by a burglar while conducting his patrol. With few leads to follow, authorities were never able to bring Atkins’s murderer to justice. Since 2012, a plaque honoring the memory of the murdered officer has stood outside a pub in Kingston Hill.[4]


6 The Murder Of Georgina Moore 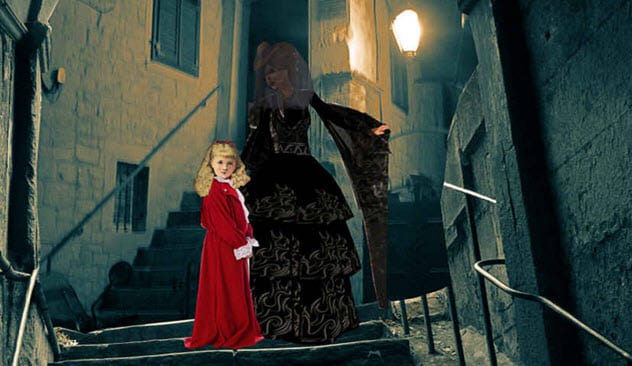 Georgina Moore was only seven years old when she vanished in London on December 20, 1881. The little girl had eaten lunch at a family friend’s house and was last seen heading back to school. When Georgina didn’t come home afterward, her parents organized a search effort. Despite looking all night, Georgina’s father, Stephen, couldn’t find a trace of her.

A boy at Georgina’s school reported seeing her with a woman whom the police believed was Esther Pay, an acquaintance of the Moores. Pay denied any involvement. But as the weeks passed by, she often asked Georgina’s parents whether there’d been any updates on the case. Nearly six weeks after Georgina’s disappearance, the girl’s body was found in a river.

An autopsy determined that Georgina had died on December 20 as a result of being strangled. Suspicions mounted against Esther Pay, especially when it was revealed that Stephen Moore once had an affair with her and that Esther still seemed bitter that Moore broke it off.

While Pay was brought to trial for Georgina’s murder, she was ultimately acquitted. It still hasn’t been established whether Pay might have murdered Georgina or whether an accomplice or somebody else was responsible.[5]

5 The Death Of King William II 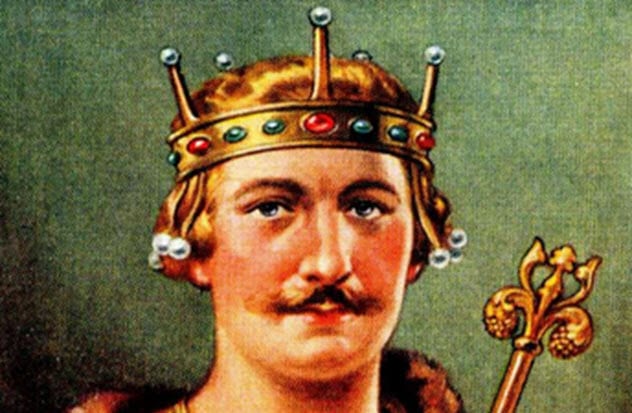 On August 2, 1100, the English king William II went hunting in southern England’s royal New Forest. Among his party was Walter Tirel, a courtier, and the king’s brother Henry. Soon after the hunt began, the news spread that William had been shot and killed by an arrow in the heart.

At the time, hunting was a dangerous activity, and few people doubted that William’s sudden death was unintentional. Tirel swore that it was an accident. But afraid that he might be held accountable, he ended up leaving England for France. Meanwhile, William’s brother declared himself King Henry I.

While modern historians believe that William was killed accidentally, others have speculated that something more sinister was afoot. There have been numerous theories about William’s death—from the bizarre accusation that William was murdered by a pagan fertility cult to the more grounded suggestion that the hostile king of France had masterminded everything.

Whatever the reason, it was very convenient for the ambitious Henry I, who just happened to be with his brother that fatal day.[6]


4 The Innocence Of Elizabeth Fenning 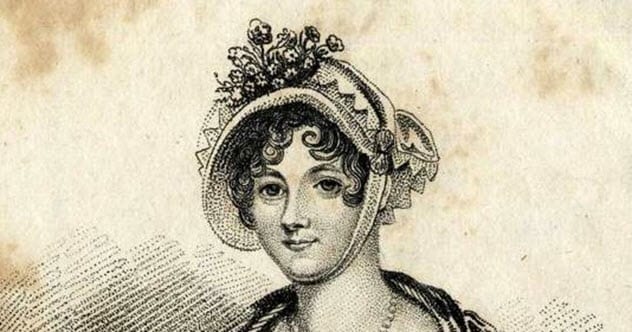 Until 1861, an act of attempted murder could warrant the death penalty in England. This was the charge on which Elizabeth Fenning, a servant convicted of trying to murder her employer and his family, was hanged in July 1815. Fenning’s execution provoked a scandal, and many people believed that she had been wrongly accused.

Fenning lived in London, where she worked as a cook for a man named Orlibar Turner. On March 21, 1815, Fenning, Turner, and two other members of the household became terribly sick after eating some dumplings that Fenning had made. Although everybody recovered and the cook became the sickest of the bunch, Fenning was accused of trying to poison the Turners.

An analysis of the dough in the dumplings found arsenic in the mix, a sign taken that Fenning must have been the poisoner. While Fenning repeatedly maintained her innocence and there was only circumstantial evidence, the law determined that she was guilty anyway.

Years later, a man on his deathbed in Essex is said to have confessed to the crime. The details are vague, but the supposed culprit claimed that he resented his uncle, “Mr. Turner,” and had slipped poison into some dough when Fenning wasn’t in the kitchen.[7]

3 The Disappearance Of Urban Napoleon Stanger 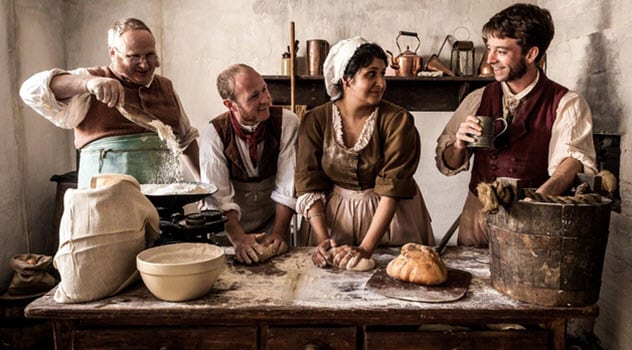 The German-born Urban Napoleon Stanger was a baker who set up business in London in 1870. Stanger’s shop did well and was popular among other Germans. On November 13, 1881, the baker never showed up to work. After his disappearance, Stanger’s employee Felix Stumm hastily took over the bakery.

When Scotland Yard was called in, officers searched Stanger’s house to no avail. They dug up his backyard, checked under his floorboards, and inspected his ovens. While the officers did recover some bones, these were shown to have belonged to a small animal.

Stanger was untraceable. His worker Stumm seemed awfully suspicious, especially considering that he’d gone drinking with Stanger and some friends the night before his boss vanished.

Stumm was never proven to have been involved with Stanger’s disappearance, but he was caught using Stanger’s name on securities. The law found Stumm guilty of fraud and sentenced him to 10 years in prison. His boss, Stanger, was never seen or heard from again.[8]


2 The Death Of Owain Glyndwr 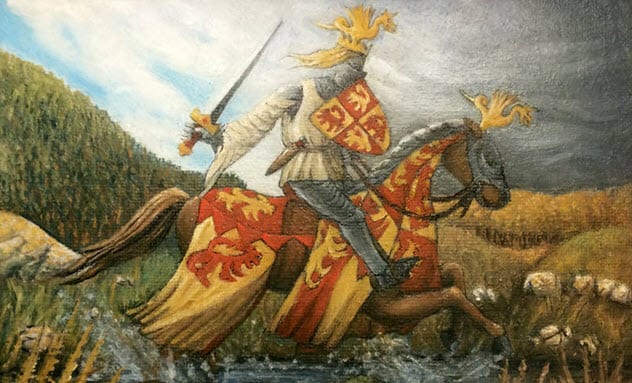 England had conquered Wales in the late 13th century, putting an end to the country’s independence. While there were some minor rebellions afterward, the strongest threat to English rule erupted in 1400 when the Welsh nobleman Owain Glyndwr declared himself the Prince of Wales.

Welsh laborers, students, and soldiers all flocked to Glyndwr’s army, launching a rebellion that would last over a decade. Even though Glyndwr was ultimately defeated, he still had many sympathizers.

Living as an outlaw after 1410, Glyndwr went into hiding and disappeared. Sightings of him continued for years. But according to the medieval Welsh historian Adam of Usk, the great rebel leader died in 1415.[9]

The circumstances of Glyndwr’s final years are murky, and the locations of his death and burial have been debated for centuries. After his disappearance, Glyndwr became a national symbol, a mythical king that legend said would someday return to lead Wales to independence.

1 The Murder Of George Burrington 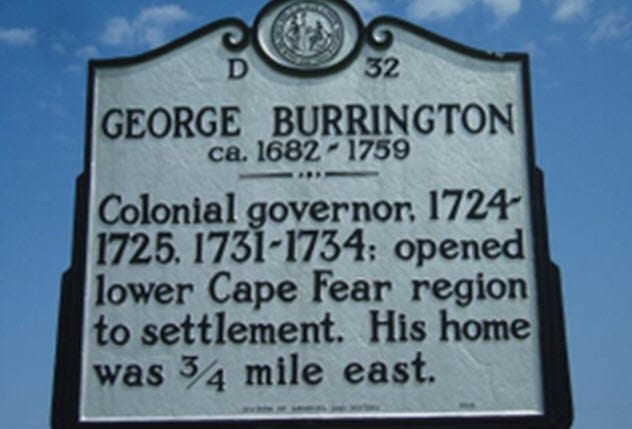 The English official George Burrington served two terms as governor of North Carolina. The first was from 1724 to 1725, and the second from 1731 to 1734. During his oversight of the colony, the hot-tempered Burrington made a number of enemies. In fact, his first term ended in a dismissal after a judge reported to the British government that Burrington had tried to break into his house.

Following his dismissal, Burrington demanded a duel with his successor, Sir Richard Everard. When Burrington came back into office in 1731, it wasn’t long before he alienated and insulted many of his fellow officials with his crude and unruly behavior.

This second term also ended in a dismissal, with the result that Burrington returned to England. In 1736, the retired official claimed that an assassination plot had been hatched against him during the last stretch of his governorship.

Burrington’s retirement was a comfortable one, but his life ended violently and mysteriously. On February 22, 1759, the former governor’s body was found in a canal in Westminster.

As his pockets were turned inside out and there wasn’t money on him, it was thought that Burrington had been robbed and murdered. His walking stick was also damaged, indicating that Burrington didn’t go down without a final fight.[10]

Tristan Shaw is an American writer who enjoys folklore, literature, and history. You can follow him on Twitter.