Most humans no longer live in agrarian communities. We’re divorced from the natural world. In the past, and not so long ago, it was to ritual rather than science that we look to solve our problems. If the crop failed, or we could not have children, there was no one else to turn to. Here are ten strange rituals used to boost fertility. 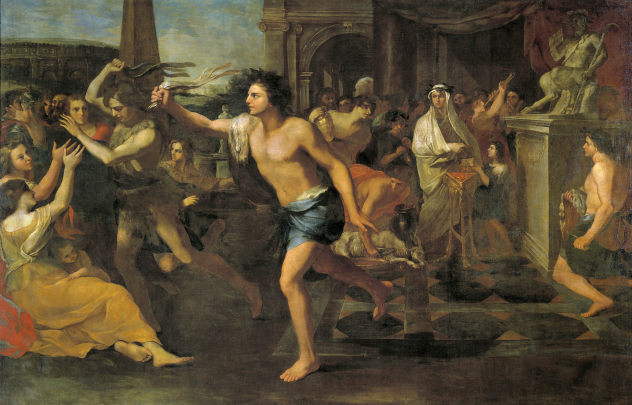 Forget not, in your speed, Antonio,
To touch Calphurnia; for our elders say,
The barren, touched in this holy chase,
Shake off their sterile curse.

The Lupercalia ritual took place in February each year. Plutarch’s Life of Romulus describes the ceremony:

Two young noblemen would be taken, and two goats would be sacrificed. The bloody dagger would be touched to the men’s foreheads, and then the mark would be wiped off with milk. The young men laugh and then cut up the goats’ skin to make whips. They then run a circuit of the city, striking everyone they can. Most people tried to avoid this, understandably, but not everyone. Young married women would step forward to be struck in order to either get pregnant or to ensure an easy childbirth.

Shakespeare’s Julius Caesar opens with the celebration of the Lupercalia. He describes pregnant women using their swollen bellies like battering rams to get in the way of the runners. Despite being master of the world, Caesar has no son to leave it to, so he thrusts his wife in the way of a man to be beaten to try to ensure her fertility. It doesn’t seem to occur to him that he might be the one who needs hitting.

If you think that beating women for fertility is an ancient barbaric rite, then you should visit the Czech Republic and Slovakia during Easter. Beautifully decorated eggs may be the most obvious fertility symbol to be found there, but alongside them can be found intricately woven whips made from willow. Willow was used as a replacement for palm leaves in Easter services where palms were unavailable.

These whips, known as pomlazka, are decorated with ribbons and are used on Easter Monday to whip good health and beauty into women. The freshness of the willow passes to the girls, who are beaten about the legs with them and guaranteed health. This whipping may also come with a drenching. Girls who answer the door may have a bucket of cold water tipped over them. 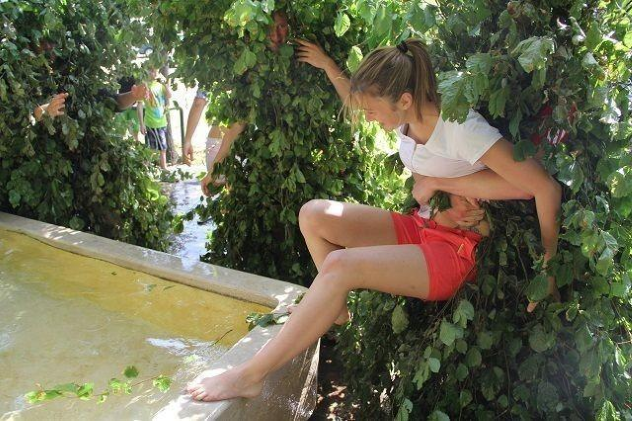 Women who receive a bucket of water may well consider themselves lucky that they do not live in the Swiss village of Ettingen. There, a ritual called Pfingstbluttlern takes place that seems to be trying its best to terrify women into fertility.

Men dress themselves up in branches and leaves to passably disguise themselves as bushes. They then seize a passing woman, pick her up, carry her to a well or water trough, and dump her in. The women so “honored” are supposed to become pregnant through the ritual. However, since the ritual dates from only the 19th century, there may well have been alternative reasons for men wishing to see a woman in clingy, wet clothes. 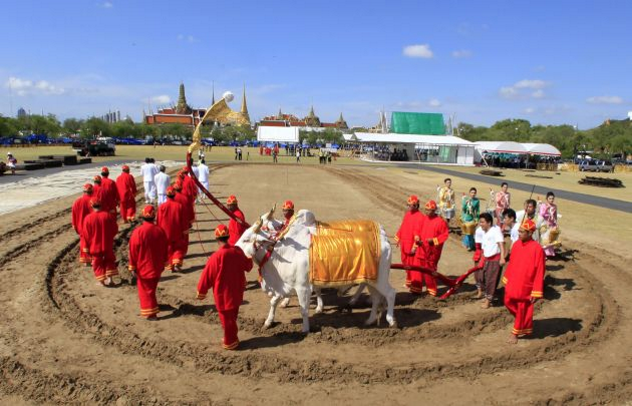 It’s not always human fertility that needs a boost. If the crops will not grow, then all the extra mouths produced by other fertility rites will become a burden. To ensure that the Earth is bountiful, all manner of rituals have sprung up around farming.

In Thailand, the Royal Ploughing Ceremony takes place each year. Two sacred oxen plow a furrow under the watchful eye of the monarch or another member of the royal family. Someone from the Ministry of Agriculture, serving as lord of the ceremony, leads the oxen. Behind him come ladies who scatter seed from gold and silver baskets and Brahmin blowing conch shells and chanting prayers.

The oxen are offered bowls of various seeds and water as well as one of liquor, and the bowls they choose to eat from can be used to predict the coming harvest. After the ceremony, the watching crowd will pick up the scattered seeds, as they are believed to be lucky. 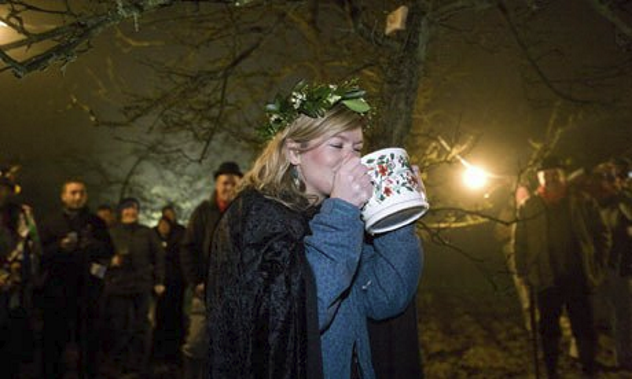 On Twelfth Night, traditionally the end of Christmas, people in parts of England can be found singing to apple trees. This may sound strange at first, but the presence of cider may help to explain it. These people, called Wassailers, are singing to wake up the apple trees for the coming summer in hopes of a good harvest. After all, a bad one might hit the cider supply.

Traditionally, a wassail king and queen lead the procession into the orchard. Here, a punch, or wassail, is made with last year’s cider. Into the wassail is dipped toast, which the queen hangs in the trees. They do this to appease any spirits which may be living there and to encourage the trees by showing them how well they did last year. 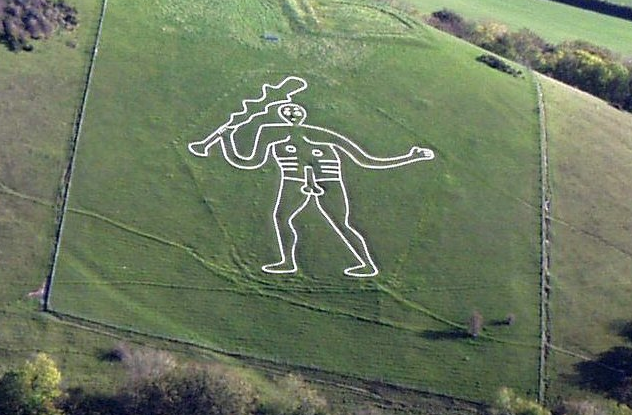 Also in England can be found the Cerne Abbas giant. This giant is a 55-meter (180 ft) chalk outline cut into the side of a hill. The giant is nude, bears a mighty club, and has other large parts, which suggest that his role may be in fertility. It is said that women who sleep on the giant’s phallus will be soon become pregnant. It must work; the surrounding area has a high level of fertility.

Of course, napping is not the best way of conceiving a child. It is said that in hopes of curing infertility, some couples have been known to couple on the giant’s member. The efficacy of this tactic has yet to be peer-reviewed.

On Clean Monday, the first day of Lent in the Orthodox Church, a remarkably dirty festival of fertility and festivity takes place in Tyrnavos, Greece. The whole day is given over to a riotous carnival in celebration of the penis. There is phallus-shaped food, a throne made of phalli, and hymns of praise are sung to the male member.

Visitors will be forced to drink soup while a large pottery penis is pushed between their legs. They then drink a strong liquor from a phallus. Those who do so are marked with ash. It should be remembered that Clean Monday in the Orthodox Church is analogous to Ash Wednesday. The Church has made its disapproval of this basically pagan rite clear, but despite various bans, the ritual has always reappeared.

A long procession of childless couples will push carts carrying statues of the saints through the streets to be honored. When they reach a church, the couples praying for children will dance inside. It is said that vigorous movement of the hips to the music is vital for the success of the ritual. 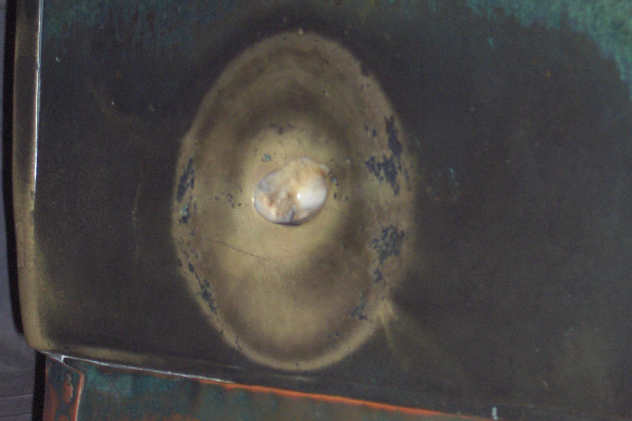 The Hagia Sophia in Istanbul was built by Emperor Justinian and stands as one of the great marvels of the Byzantine world. It has been both a church and a mosque and is now a museum. While many go there simply to appreciate the grand dome and the history of the site, some go to stick their thumb into a marble column.

The column in question is said to have come from one of the Seven Wonders of the Ancient World, the Temple of Artemis at Ephesus. Legend has it that one day, the emperor had a headache, rested against the cool marble, and was cured. When water was found to be dripping from the rock, it was suggested it was the Virgin Mary’s tears. Now people will line up to place their thumb into the hole to be healed by the water. 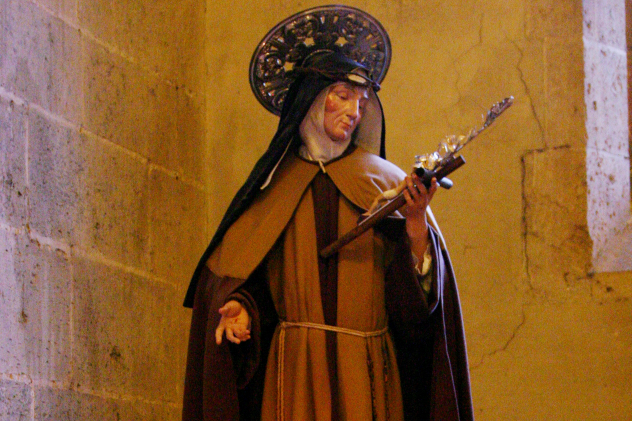 Saint Mary Frances was born to a hard father, who mistreated her cruelly. He attempted to force her to marry, but she insisted on becoming a nun. She took the name Mary Frances of the Five Wounds of Christ. Her devotion was said to have led to her receiving the marks of the Stigmata.

Today, this chaste saint has somehow become associated with fertility. Women hoping to become pregnant will make a pilgrimage to Naples, where the saint’s armchair can be found surrounded by her relics. Married women will sit in the chair and be touched by a reliquary containing Maria Frances’s vertebra and hair while nuns pray for the woman’s fertility. On the walls of the room are posted pink and blue notices announcing the births of those blessed by the saint, which the faithful see as proof of her efficacy.