It stands to reason that in any large population, police will encounter odd situations from time to time. The situations we’ll be taking a look at, however, straddle a fine line between “odd” and “those involved woke up inside a Quentin Tarantino film.” Reality can and often does one-up fiction in terms of sheer weirdness, and we’ve got the proof. 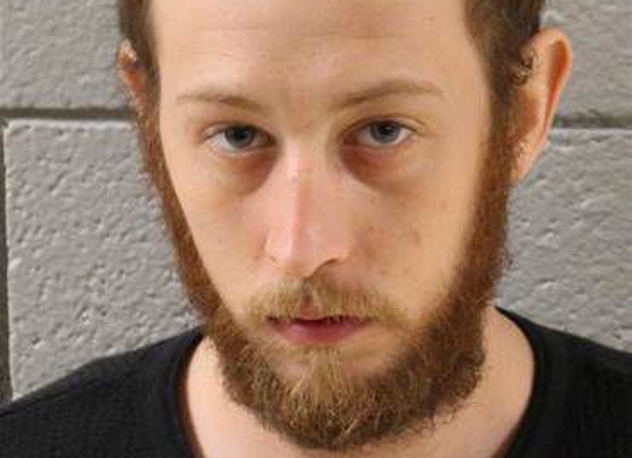 In July 2016, police raided the home of Pennsylvanian Joshua Lee Long looking for evidence relating to a series of burglaries in the area. They found more than enough to arrest him, but they also found something rather unexpected in a Walmart shopping bag underneath the porch—a jar of embalming fluid containing a human brain. Joshua had named it “Freddy.”

Police are pretty sure that the brain was stolen, too, perhaps from a lab or university. Joshua also found another use for the formaldehyde-based embalming fluid: He’d been spraying it on his marijuana to intensify the high. Pennsylvania State Trooper Bob Hicks astutely summed up the raid: “This is one of those situations where, I think, a lot of guys were surprised.” 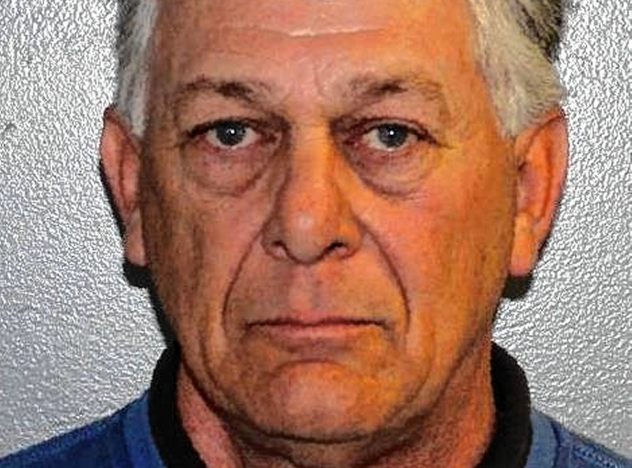 Frank Moracco, age 60, had been serving as mayor Frankfort, New York, since 2004 while pulling double duty as foreman of the New York Department of Transportation’s sign shop. Apparently feeling that Frankfort wasn’t getting its fair share of signs, Moracco used his position as a means to plunder 111 street signs from the DOT, which ended up with the Frankfort street department.

Frank had begun distributing the shiny new street signs around his own town, but the theft was discovered after an investigation in 2015. Frank was arrested and charged with official misconduct and petit larceny, both misdemeanors, and continues to serve as mayor of Frankfort. At election time, he may want to remind the voters that he was willing to go to jail just to get them some new street signs. 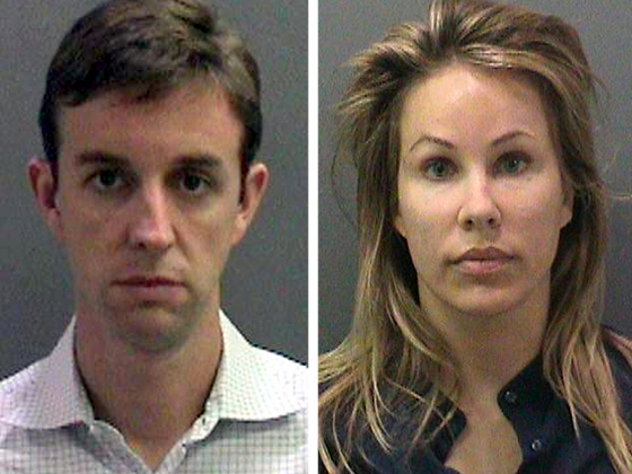 In 2010, Kent and Jill Easter took it poorly when PTA mom Kelli Peters uttered a perceived slight against their seven-year-old son’s intelligence (saying he was “slow to line up”). They reacted the way that no parents outside of a soap opera would—by starting a year-long campaign of harassment, false stalking accusations, and calls for Ms. Peters’s job. This finally came to a head when Kent planted marijuana and prescription drugs in Ms. Peters’s car and then called in to report the tip with a fake Indian accent.

Despite resulting in a humiliating police interrogation for their victim, the Easters’ cartoonish scheme did not succeed. Incredibly, both Easters are former attorneys (Kent’s law license was suspended; Jill was disbarred) who represented themselves at both their criminal and civil trials. The end result was several months behind bars for each and a $5.7 million judgement against them. Also, Jill now goes by the name “Ava Everheart” because “Jill Easter” didn’t sound quite enough like a soap opera villain. 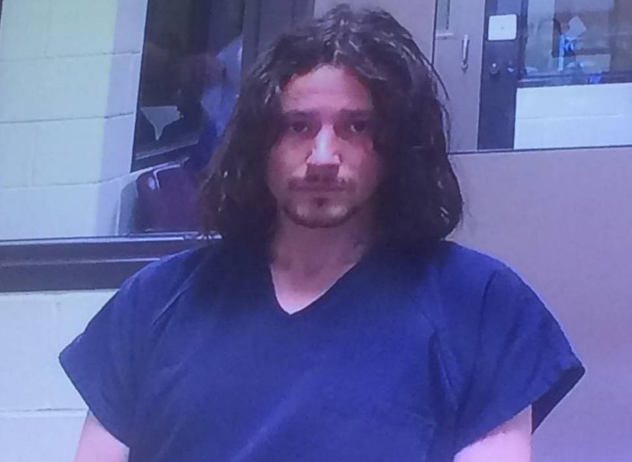 In 2016, police responded to a report of a man tearing down flyers around a college library. They got a whole lot more than they bargained for.

The agitated man struggled and fought, and he took a punch to the face and two shots from a Taser before . . . getting up and running away. Several baton strikes and Tasings later, the suspect was finally brought under control with assistance from another deputy. For as long as it took to place him under arrest, it took almost as long to write his name on the police report: Beezow Doo-doo Zopittybop-bop-bop. (That’s three bops.)

The man had been previously been arrested in 2012 and 2013 on weapons and drug charges. He insists that he legally changed his name to Beezow Doo-doo Zopittybop-bop-bop in 2011 to represent “the explosion of awareness of the interconnectedness of the infinite love in the universe.” We submit that it’s more likely that he changed his name with the intention of getting arrested as often as possible to troll the police. 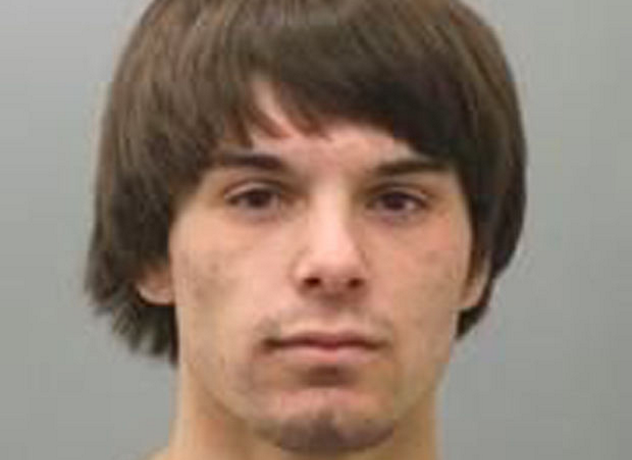 Photo via the St. Louis Post-Dispatch

After crashing his car one evening in late 2015, a St. Louis teenager panicked and abandoned the vehicle. He jumped a fence into a secure area and was quickly met by two security guards. A brief struggled ensued, the teen was subdued, and the police were called. They presumably then started looking for the prank show’s hidden cameras. After all, they were standing in the middle of a Budweiser brewery, getting ready to arrest a trespasser named Bud Weisser.

Unfortunately for Bud, who’d apparently stumbled on his namesake brewery by pure coincidence, he was already on probation for a 2014 burglary charge. This case had resulted in a five-year suspended prison sentence. 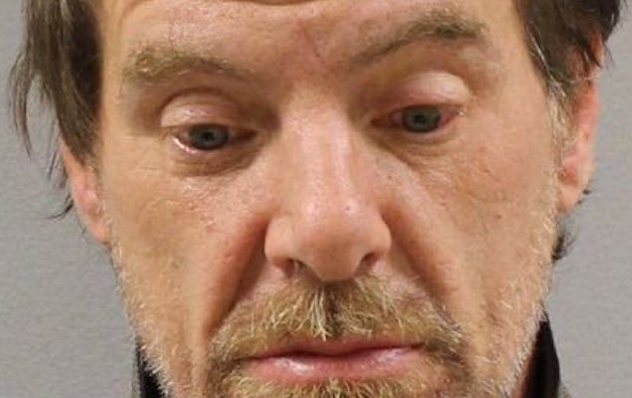 In July 2016, a Tennessee lingerie store clerk called police to report a peculiar incident. Shortly after midnight, a visibly drunk man had barged in, grabbed an expensive mannequin in a pink spandex dress, and dragged it out to the parking lot, losing one of its arms in the process. After a brave store employee argued with the man for a few minutes, he heaved the mannequin into the back of his truck and took off.

The license plate was easily traced, and police found suspect Christopher Wade at home in bed. The mannequin, still wearing all of the merchandise from the store, was in bed with him. Christopher was arrested on an outstanding warrant, with a new charge of theft. His would-be bride remains in evidence, as the case is ongoing.

Photos via The Smoking Gun

Police conducting a DUI bust outside of Knoxville, Tennessee, in 2016 immediately noticed some strange details about their hulking, bald, male subject. The ribbon tied into his goatee was the first red flag. As the man exited the vehicle, the police noticed that he was wearing a skirt with white and pink leggings. He smelled of booze and was unsteady on his feet, but that may have been due to the high heels he was also wearing.

Upon being informed he was slightly over the legal limit, the man told officers he would need a pair of keys from his truck—one on his keychain, the other around his female passenger’s neck—to unlock the chastity device he was wearing. Yes, we’re referring to the medieval-era, highly uncomfortable, locking metal underwear designed to prevent sexual activity. The man was booked into jail on a drunk driving charge, but the booking report unfortunately fails to describe the device or how it was dealt with by jail staff. 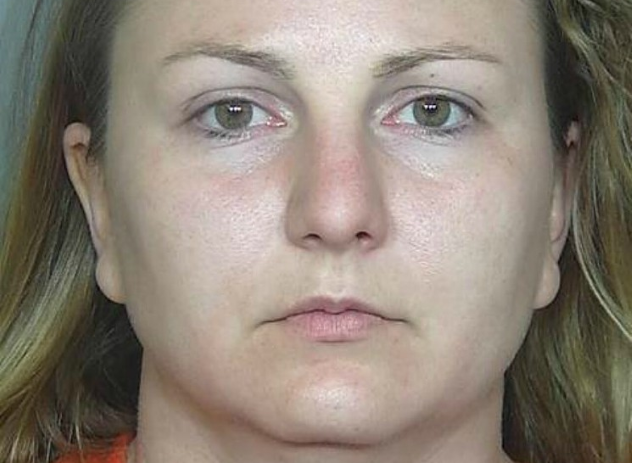 In May 2016, police in Weld County, Colorado, responded to a robbery report at a local bank. A car without license plates had come through the drive-thru, and the female driver told the teller that a man in the backseat was threatening her kids with a gun and demanding cash. After receiving an undisclosed amount of cash through the tube, the robber drove off. The teller told the police that she didn’t see any man in the backseat.

A vehicle matching the description of the one used in the robbery was soon found parked outside a home in the area. The resident, Rachel Einspahr, confessed to the robbery and admitted that there had been no man, but the part about the kids was true. She had been babysitting them for a friend, and they were in the backseat at the time of the robbery.

Rachel had been driven to the crime immediately after meeting with her defense attorney. She owed $15,000 restitution in a previous criminal case—and she decided that robbing a bank was the best way to come up with the money. 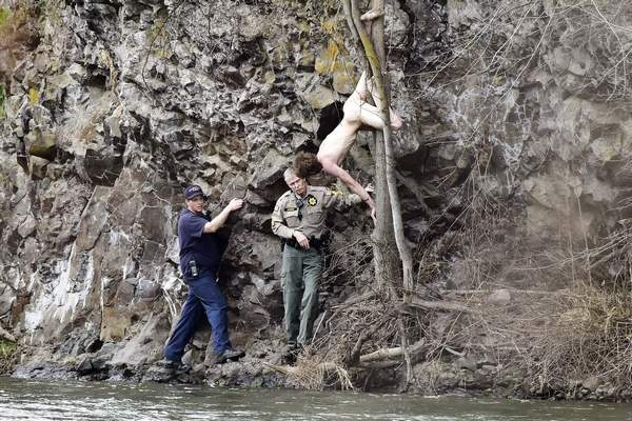 On a Saturday in March 2016, Gail Wilson’s weekend began the way that so many do—with a strange naked man casually strolling through her front door and saying “Hi!” It ended in a similarly mundane fashion—with said naked man hanging upside down from a tree on her property, trying in vain to fight off the police.

After making his entrance, the man tried several times to hug Gail, which for some reason she wasn’t too keen on. While the man dragged Gail’s dog into another room, Gail managed to call 911, fearing the worst. Then, the man was suddenly in her backyard, poking around the shed, which was situated near a 15-meter (50 ft) cliff. When the police arrived, he took off running and scaled a fence . . . and over the cliff he went.

Police found him at the bottom in the condition described above, flailing and combative. After an hours-long rescue operation and a brief trip to the hospital, Steven Burton was booked on a litany of charges, including disorderly conduct and resisting arrest.

Sand Lake, Michigan, police came upon a grisly scene in the summer of 2015. Martin and Glenna Duram, a middle-aged married couple, had apparently been shot and left for dead. While Martin didn’t make it, Glenna survived and eventually recovered, claiming to have no memory of the shooting or anything that had happened prior to it.

However, Martin’s pet parrot, Bud, started to say some strange things after going back to live with Glenna. Bud seemed to imitate an argument between a man and a woman, with two distinct voices, always ending the same way—“Don’t f—ing shoot!”

As a result, the police investigation continued, eventually turning up three suicide notes written by Glenna Duram as well as the handgun used in the shooting. Based in large part on the testimony of Bud the parrot, Glenna was charged with first-degree murder in June 2016.