It’s easy to forget that during the 1930s, Adolf Hitler and his National Socialist Party—though seen as radical by many—were not necessarily considered a threat to world peace. It’s even easier to forget that Hitler had more than a few sympathizers, even outright supporters, in the United States. Here are some pieces of history that are seldom discussed, but should serve as a reminder as to how extremist ideals can take hold anywhere, anytime. 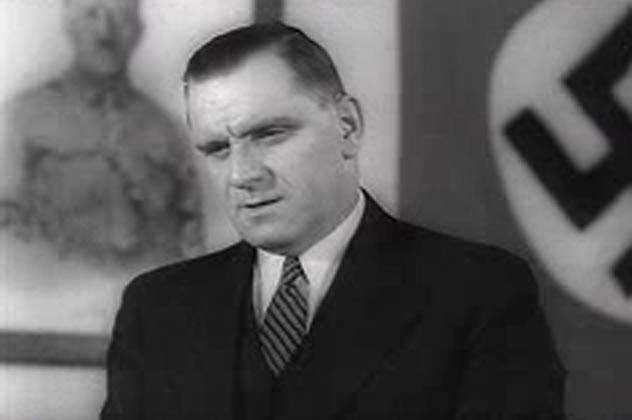 A great portion of Nazi ideology revolved around the purity of the German “race,” and Hitler shrewdly realized early on that this could be exploited in the German migrant populations of his potential foes. A mere four months after his rise to power in 1933, an American organization known as “Friends of the New Germany” was assembled from several smaller organizations around the US. Originally made up of both German nationals and US citizens of German descent, it was restructured in 1936 into the German American Bund (“Bund” meaning “Alliance”), which admitted only German-Americans.

Since a quarter of the US population at the time had some German ancestry, membership was higher than one might imagine. The Bund’s leader, Fritz Kuhn, was even dubbed the American Fuhrer. While taking care to ensure its perception as an American organization remained solid (expressions of American patriotism were plentiful in Bund gatherings, which often took place on American holidays or on presidents’ birthdays) the fact remains that American citizens gave the Nazi salute, shouted “Heil Hitler,” and otherwise behaved much as an attendee at any German Nazi Party gathering would have. Fritz Kuhn was exposed by undercover journalists in 1937 and jailed for embezzlement two years later. 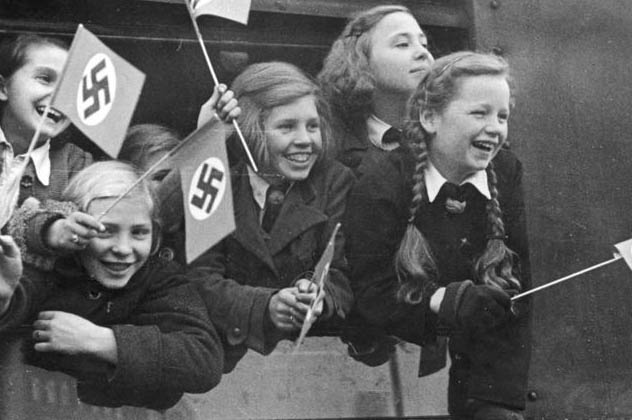 After its 1936 restructuring, the Bund began making a concerted effort to advance Nazi ideology in the hopes that the US could be made sympathetic to, or even a stronghold for, Hitler and his armies. Among its most alarming projects: summer camps for American youths. While not supported by or directly related to the infamous Hitler Youth program, the similarities were nevertheless glaring. Parents and children alike saluted the Fuhrer and wore the same armbands their German counterparts did. By the time they were shut down shortly after the start of the war, 16 of these camps existed all across the country, from New York to Los Angeles.

Anti-Semitic sentiment was at an all-time high in the US at this time, and programs like these were intended to indoctrinate America to racist, fascistic ideologies. Children from eight to 18 were taught to speak German and participated in military-style drills. Nazi ideology and German heritage were essentially presented as part of the same package, and many German-Americans were receptive to the message. 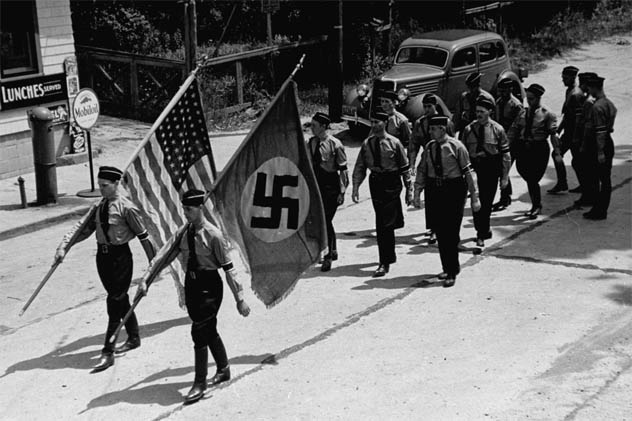 The most prominent of these camps was Camp Siegfried in upstate New York, outside the small town of Yaphank. The town’s small houses were originally built as bungalows for the summer campers. Anyone seeking to purchase land in the town had to be primarily of “German extraction.” Many of its main streets were named after Hitler, Goebbels, and other prominent Nazi Party leaders.

Even after the beginning of the war, pro-Nazi sentiment would, shall we say, not get one kicked out of the town of Yaphank. Nazi-themed parades were held on its streets, Nazi and SS flags were flown side by side with American flags, and residents carved a giant hedge into the shape of a swastika.

Though the land was eventually seized by the FBI after the war, the town still stands, retaining the original tract homes built for pro-Nazi summer campers. Unfortunately, though many of its residents are unaware, its racist bylaws are still in effect. Even today, virtually all of its resident are white and of German ancestry. 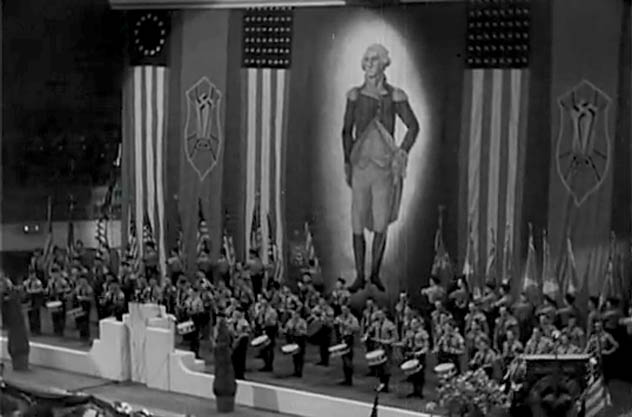 Friends of the New Germany, and later the Bund, were headquartered in New York, making the state a primary hub of American pro-Nazi activity. As early as 1934, the predecessor organization was holding rallies at Madison Square Garden. Participants gave the Nazi salute, chanted slogans, and bore banners with sentiments such as “Stop Jewish Domination of Christian Americans.”

The most infamous of these gatherings took place on February 20, 1939, when the Bund was at the height of its power. A Bund gathering wrapped in the title of a “Pro-America” rally at the Garden was attended by over 20,000 people that day. Four times that number protested outside the venue, attempting to storm it and shut it down. They were unsuccessful, but this was among the last such events. The Bund was dissolved after the US declared war on Germany in late 1941. Conspiracy theories have long examined a possible collusion between the US government and the Nazi regime. Circumstantial evidence abounds, from the similarities between the CIA’s reviled MKUltra program and similar programs developed by the Nazis, to the role of some of Hitler’s top rocket scientists in the development of NASA.

Among the many outlandish claims, a truth was revealed near the turn of this century that is somehow even more outlandish: Prescott Bush—a US senator and father of future president George H.W. Bush—had mutually beneficial business relationships with German companies that were directly involved with Hitler’s rise to power.

While the secretive nature of these dealings helped them avoid scrutiny for decades, the eventual reveal prompted speculation as to whether Bush should have been tried for war crimes. The assets of his company were seized in 1942 under the Trading With The Enemy Act. Not only may this relationship have played a substantial role in helping fund the Nazi war effort, it may have also laid the foundation for the Bush family fortune. 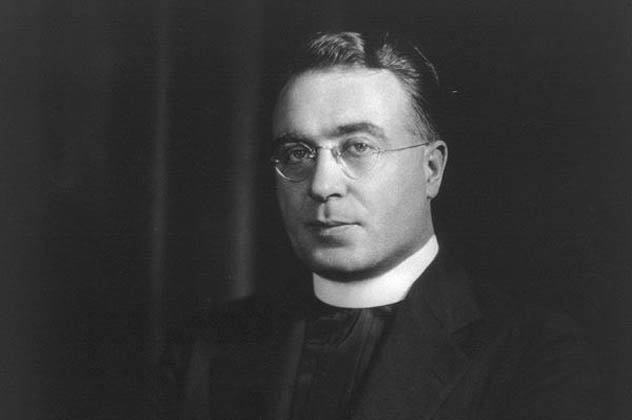 As previously suggested, fascism was not as dirty of a word in the 1930s as it is today. Still, the vast majority of Americans were wary of fascist regimes and their tactics; after German paramilitary forces and citizens took to the streets on November 9, 1938—the infamous Kristallnacht—an American poll revealed that 94 percent of Americans disapproved, despite the pervading anti-Semitic sentiment of the time.

Yet throughout it all, one loud voice could be relied upon to defend and explain Hitler’s actions: Father Charles Coughlin, a Catholic priest and radio personality with an audience of millions. Coughlin had built his audience attacking “bankers” during the Great Depression, and he extended this criticism specifically to Jews in a broadcast that took place a mere 11 days after Kristallnacht. He railed against German Jews for appropriating Christian property and attempting to spread Communism.

Although his show was canceled shortly thereafter, the damage was done. Coughlin became the hero of Berlin . . . and America. The station owner reported that that, in response to the cancellation, “several thousand people encircled the block where our studios are located, denounced . . . WMCA as un-American, and shouted its slogan of ‘Don’t buy from Jews,’ ‘Down with Jews,’ etc.” Eugenics was a crucial component in Nazi ideology. The concept is largely thought to have originated with the Nazis or at least in Europe, but in reality, eugenics originated in America with some of the most prominent scientific and business leaders of the era.

Financed by such venerable entities as the Carnegie Institute and Rockefeller Foundation, many of America’s most respected scientists were busy working up theories of “race science” at the behest of their corporate financiers. Data was tweaked and faked to serve the premise that non-white races are genetically inferior and must be bred out of existence.

This “science” became prominent in the early part of the 1900s and became a vital part of Hitler’s ideology. The United States at this time actually had laws pertaining to eugenics on the books. Hitler was familiar with these, enabling him to frame his anti-Semitism in (completely invalid) medical and scientific terms. He once confided to a subordinate, “I have studied with great interest the laws of several American states concerning prevention of reproduction by people whose progeny would, in all probability, be of no value or be injurious to the racial stock.”

3Failure Of The American Press 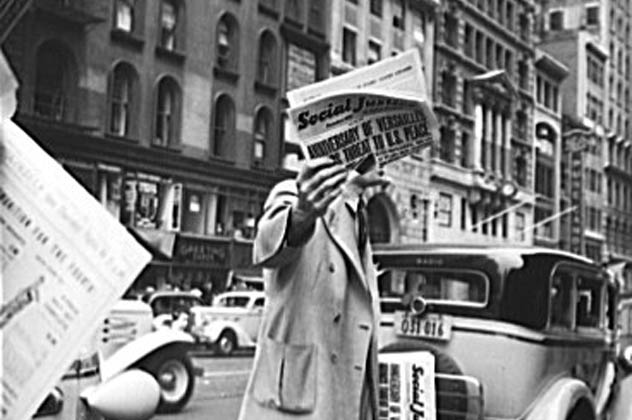 After Hitler’s initial rise to power in 1933, much of the American press seemed to be confused—and even at odds with each other—over what the ramifications were and how it should be reported. The Nazis had risen from small fringe party to majority political party in just a couple years. Many newspapers seemed to think that he would calm down with his expansionist rhetoric once in office. Some reporters even thought he’d bring peace and prosperity to Germany after all.

The Christian Science Monitor, in a 1933 piece, praised the “quietness, order, and civility” observed by a visiting reporter; there seemed to be “not the slightest sign of anything unusual afoot.” Later in the decade, the New York Times reported “a new moderation” in the German political atmosphere since Hitler’s rise, with the New York Herald declaring stories of atrocities against Jews to be “exaggerated and often unfounded.”

While much of this can be explained by the Nazi regime’s deft handling of foreign press, much of it can also be explained by a deep misunderstanding on the part of Americans as to the nature of Hitler’s problem with Jews. Many US newspaper editors framed the conflict as one between ideologies of differing political views, rather than one between a race of people and those who wished them exterminated. 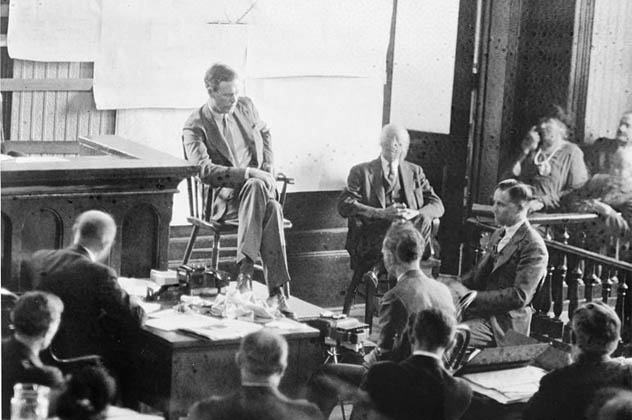 Aviator Charles Lindbergh was an American hero of the 1930s. He performed the first solo flight across the Atlantic in 1927 and had endured the very public ordeal of the kidnapping and murder of his infant son in 1935. He was unfortunately also a proponent of eugenics, having become close with French scientist Alexis Carrel, who was a firm believer. In a 1935 interview, Lindbergh asserted, “There is no escaping the fact that men were definitely not created equal,” and discussed Dr. Carrel’s eugenics-based ideas on race. A 1939 radio address was the final blow to his weakened public image. In it, he opined that “our civilization depends on a Western wall of race and arms which can hold back . . . the infiltration of inferior blood.”

Auto manufacturer Henry Ford was also an unrepentant anti-Semite and Nazi sympathizer, allowing recruiters for the Bund to work in his factories and employing Gestapo-like thugs to crack down on those employees who might have tried to unionize. Konrad Heiden, a biographer for Hitler, stated that Ford supplied Hitler with direct financial support totaling at least $340,000. Ford even paid for the reprinting and distribution of the racist hoax pamphlet “Protocols of the Learned Elders of Zion” to libraries in the United States. In politics and culture, “Nazis” and “Hitler” have become catch-all comparisons for those who would brutalize or subjugate others. Nevertheless, the legacy of America’s brief flirtation with this poisonous ideology is all around us.

White supremacist movements and neo-Nazi groups have long flourished in the US, but Hitler’s failed attempt at world domination gave many of them a new focus and a defined ideology. According to the Southern Poverty Law Center, which tracks hate groups, neo-Nazi organizations still exist in every single state as of 2016.

The CIA isn’t spotless, either. Documents uncovered in 2014 indicated that as many as 1,000 former Nazis were employed by the agency as spies during the Cold War, with some still living in the United States under government protection as late as the 1990s.