“GMO” foods may seem like a modern phenomenon, made possible only because of well-funded labs and genome analysis. What most consumers don’t realize is that most of humanity’s crops were already genetically modified thousands of years ago. In almost all cases, our favorite fruits and vegetables were engineered to be fundamentally different from their wild ancestors.

SEE ALSO: 10 Foods That Have Been Genetically Modified Beyond Recognition 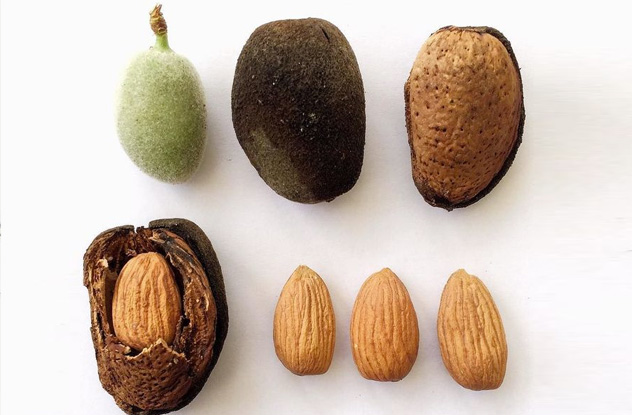 The almonds we eat today are a domesticated variety derived from several species of wild almonds, all of which are bitter, spiny, and contain deadly amounts of cyanide. In the wild, almond trees produce a sugary compound and an enzyme that inevitably combine into cyanide when the edible parts of the plant are chewed up.

The identities of the specific strains used to create modern almonds are unknown. However, it is clear that humans selected and interbred the sweetest varieties of bitter almonds until the nuts were edible. This is quite a feat, considering that eating a dozen or so of the toxic kind would kill whoever had the task of testing out the newest crops. Luckily, the mutation that halts cyanide production is a dominant one, and almonds quickly became a popular treat. 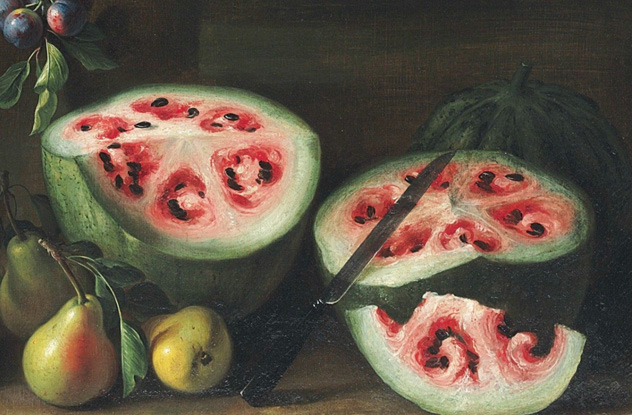 The modern watermelon is one of the most extensively modified fruits in human history. Sub-Saharan Africans created the first domesticated varieties, which came in larger sizes and different colors. After the fruit’s introduction to Asia and Europe, it became substantially fleshier, sweeter, and larger.

Compared to the original watermelons found in the wild, which consisted mostly of seeds and weighed a mere 80 grams, modern ones are 91.5 percent water and weigh 2–8 kilograms (4–18 lb). Through several thousand years of artificial selection, the average volume of the watermelon has undergone a 1,680-fold increase.

The fruit’s appetizing red color is relatively new as well. It’s caused by the overproduction of the compound lycopene, a trait intentionally bred into watermelons by humans. Analysis of the watermelon genome also reveals that domestication has reduced the plant’s natural resistance to diseases. Today we are still modifying them, mostly to restore and then improve these natural immune functions.

8Broccoli, Cauliflower, And Other Cultivars 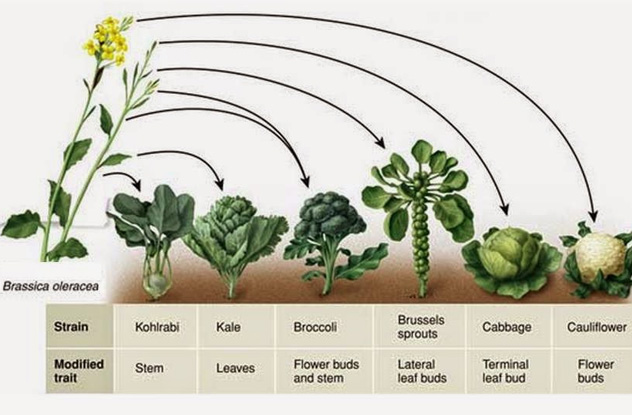 Broccoli doesn’t exist in the wild. Neither does cauliflower, cabbage, Brussels sprouts, collards, or kale. All of these plants are the result of human cultivation, and they’re all the same species. These crops are artificially bred variations of the mustard plant Brassica oleracea. In its wild form, this plant produces several large leaves, as well as bunches of small yellow flowers. Different subspecies such as broccoli or cauliflower are created by modifying the expression of genes controlling the way the plant grows.

In broccoli, the flower clusters that once bloomed in the wild have been expanded into a cloud-like structure of many closed buds. In cauliflower, the flowery white head consists of mutant, undifferentiated cells that almost always remain sterile. One of the most striking examples of unique structures in this species is Romanesco broccoli: Its single modified bud is made up of smaller and smaller buds, forming a distinct logarithmic spiral pattern. 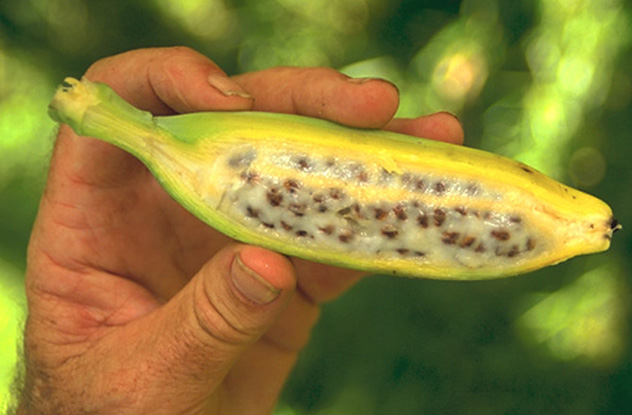 It seems like bananas were practically designed for us primates: They’re soft, seedless, tailor-made for the grip of our hand, and even come with a tab for easy opening. In reality, wild-type bananas are mostly inedible, and the plantains we eat today are completely different after genetic modifications. Wild-type bananas, which are tiny, tough, and filled with pit-like seeds, sometimes produce mutant variants without seeds.

Humans have been playing with this specific mutation for at least 6,500 years to produce all the varieties of seedless bananas available today. The banana’s design might even be too popular at this point; today’s mass-produced bananas are considered too genetically uniform, making them susceptible to diseases. Looks like we have some more work to do. 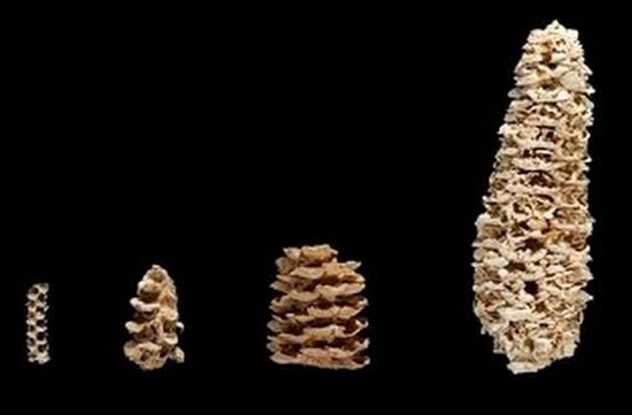 The wild ancestor of modern-day corn is a grass known as Zea or teosintes. Ancient Meso-Americans began selectively breeding this species as far back as 10,000 years ago. Gradually, they produced a plant unlike any other found in the world.

These soft, starchy plants appeared suddenly and mysteriously in archaeological records; the secrets of its development were only discovered recently through molecular and genetic analysis. The most important change suppressed branching of stalks. As a result, the plant produces fewer ears, but these ears are enormous, with long rows of kernels.

Stranger still, very little was changed in the plant’s genome during its domestication. The difference between the ancient and modern version amounts to a mere five or so genes. 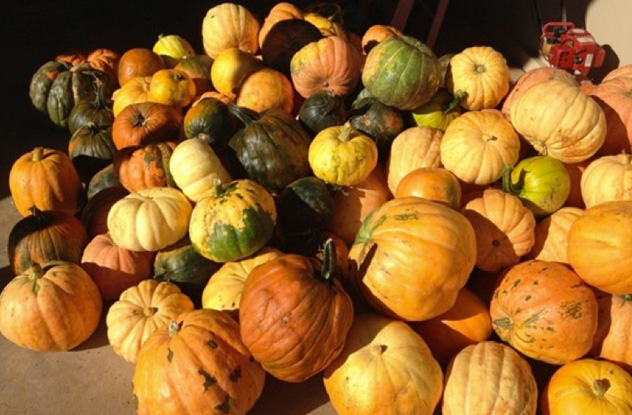 Pumpkins, squash, and all other gourds are cultivated forms of tiny ancient plants. They all hail from the genus Cucurbita, which has become one of the most important plant groups for human consumption. Like corn, it was domesticated in the Americas at least 7,000 years ago. Ancient varieties were small, with extremely bitter flesh and few seeds. At some point, they were bred to produce more seeds. Later in history, there was more focus on creating different shapes, sizes, and types of flesh.

Pumpkins are native to North America and have no known wild variety that still exists. Long before their domestication, specifically around 14,000 years ago when humans first arrived to the continent, the early varieties of pumpkin nearly went extinct. These plants were once rich in cucurbitacins, one of the bitterest compound groups known to science. It appears that humans first used these gourds as containers and later began to use them as food sources. 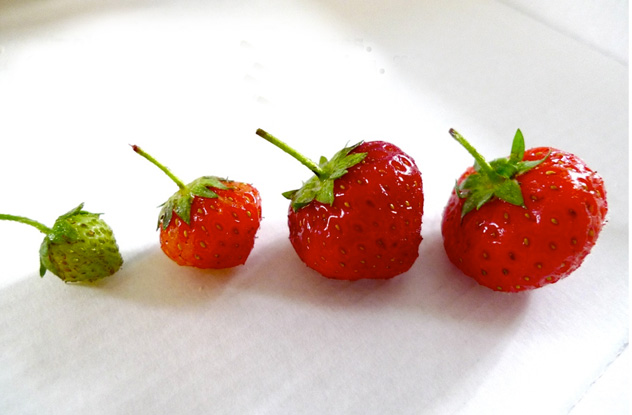 Sweet, juicy strawberries are a very recent creation. Tiny ancestors were sometimes collected throughout the British Isles during the ice age, but the strawberry we enjoy today was cultivated as recently as the 1750s.

Mathematician and engineer Amedee-Francois Frezier brought a larger variety of wild strawberry while mapping out Chile for Louis XIV. After decades of trial and error, garden strawberries were created in France by crossing this plant with wild berries from America.

In 1759, pine strawberries became commercially significant. Finally, the huge, “modern” type of strawberry appeared by accident during hybridization experiments in 1806. 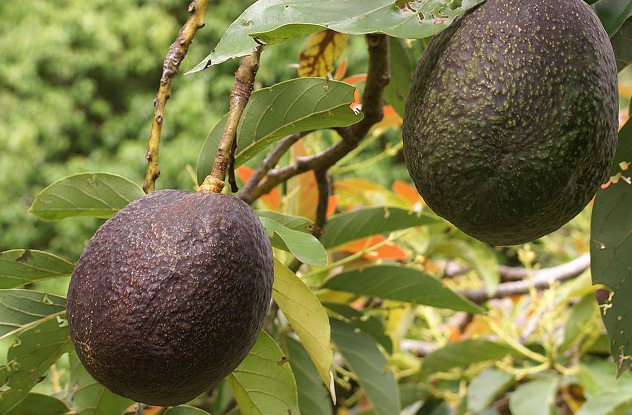 The original, primitive forms of the avocado are better described as “avocado-like fruits.” Unlike the fleshy, leathery-skinned kind we have today, most wild avocados are encased in hard shells. Uncultivated avocados are tiny enough to fit into the center of your palm, growing to about two or three inches in diameter. The wild-type flesh is gritty instead of creamy, and there is very little of it because the pit takes up almost all of the space inside the fruit. In 1927, agricultural explorer and researcher Wilson Popenoe commented that “the flavor is strong, not pleasant, and the fruit is scarcely considered eatable.”

For most of its time as a domesticated crop, the avocado remained unchanged due to its status as a sacred plant in tropical Mesoamerica. Large gardens—sometimes even entire forests—of avocado trees were grown and carefully maintained over ancestral burial grounds. 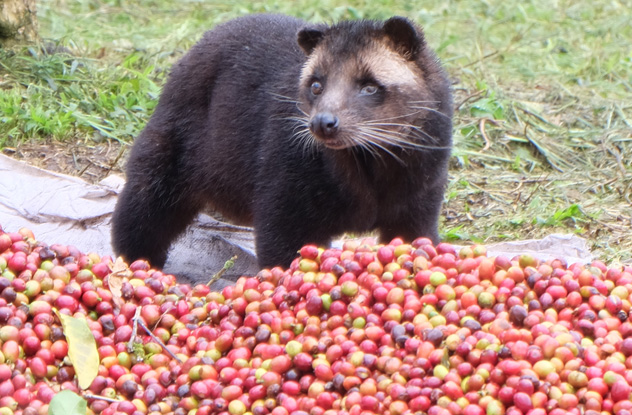 The coffee bean is another recently discovered and cultivated plant. It makes this list not because it has been fundamentally changed from its wild form but because there are so many varieties created solely to satisfy our cravings for novel tastes.

First cultivated in India during the 1600s, this African plant now comes in several dozen varieties and cultivars and continues to evolve with humans. Not even looking at varieties within each species, there are about 10 distinct species of coffee plant at present. Need your coffee less bitter? More bitter? Slightly buttery? Caffeine-free? Sourced from frost-resistant, self-fertilizing genetic stock that is purposely grown in civet feces? There’s a variety of bean for that. All modern, genetically modified varieties descend from ancient Arabica beans, which in itself is a hybrid of mysterious origin. 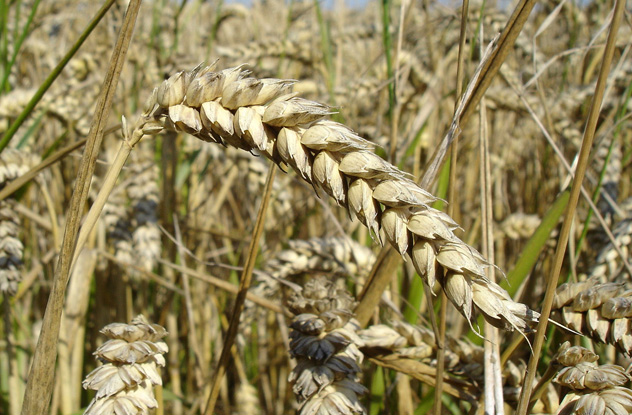 The cultivation of wheat began long before recorded history. In fact, the start of human civilization itself began when primitive people transitioned from the nomadic, hunter-gatherer lifestyle to an agriculturally based one. Wheat was one of the first and most important crops grown during this time, and the first human settlements gathered around areas where this food could be grown.

At first, prehistoric man was content to gather stray seeds of wild grasses. But soon (before people started making pottery, even) they had started to gather plants from areas with more seeds and replant them back home. Eventual changes in seed size and nutritional value were achieved, but the most important trait we managed coax out of their genomes was something called “indehiscence.” Normally, pods containing the edible parts of these plants shattered, so seeds could spread across the wind and ground. Thanks to prehistoric artificial selection, this trait was eliminated and our ancestors could harvest the plant itself, with all its seeds intact.