The earliest prostheses were crude. Whether peg legs or hand hooks, they helped the men and women who wore them to perform the everyday tasks associated with their vocations. Over the thousands of years since prostheses first appeared, many improvements have been made regarding their materials and design. This may make the 10 antique body parts in our list seem even more bizarre than they might appear otherwise. 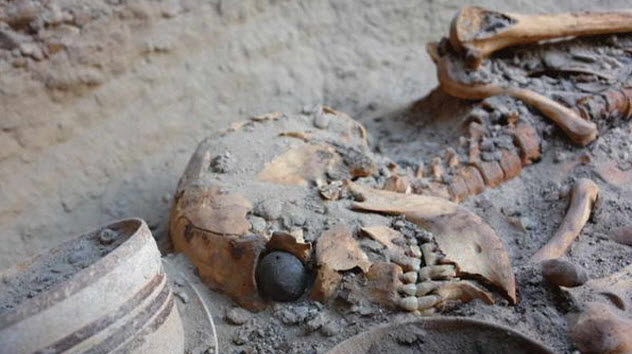 Shahr-e Sukhteh, a Bronze Age settlement in southeastern Iran, yielded a lightweight, 2.5-centimeter (1 in) prosthetic eyeball made of bitumen paste over which was laid a thin layer of gold. Hemispherical, it bore a hole through each side, which enabled it to be secured to the eye orbit with gold wire.

The center of the eyeball was “engraved” with an iris and the golden rays of the Sun. The remains with which the prosthetic eye was found date from 2900 to 2800 BC. At a height of 1.8 meters (6 ft), the unusually tall woman was likely to have been of royal or noble blood.

In the fifth century BC, Egyptian priests also fashioned early prosthetic eyes known as ectblepharons. Constructed of painted clay or enameled metal that was attached to cloth, these prostheses were worn outside the socket. 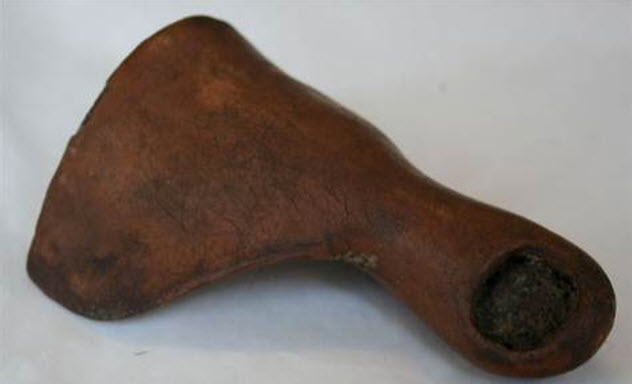 Archaeologists have unearthed two prosthetic toes. One, known as the Greville Chester toe, dates to 600 BC and is displayed in the British Museum. Made of cartonnage (ancient papier-mache) mixed with linen, “animal glue, [and] tinted plaster,” the big toe assisted its wearer in walking.

An older prosthetic big toe, the Cairo toe, found near Luxor, Egypt, and currently exhibited in the Egyptian Museum in Cairo, dates from 950 to 710 BC. Made of wood and leather, the prosthesis is shaped somewhat like a gaiter but covers only the instep. Research shows that its use with sandals provided the wearer with 60–87 percent “of the flexion of the intact left toe.” 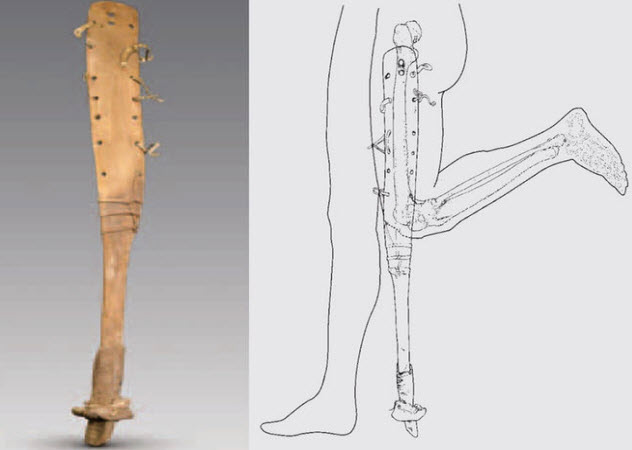 Discovered in 2016 in a grave in Turpan, China, the 2,200-year-old remains of a 50- to 65-year-old Gushi man 170 centimeters (5’7″) tall included his prosthetic leg. Made of poplar, the leg features holes along two sides that allowed the prosthesis to be secured to the deformed leg with leather straps.

He was fitted with the artificial limb, which was equipped with a horse’s hoof rather than a foot. His kneecap, thighbone, and tibia had fused together at an 80-degree angle, possibly because of joint inflammation, rheumatism, or trauma. However, it is likely that tuberculosis caused the deformity when a “bony growth” fused the joint.

An older prosthetic limb, dating to 300 BC, was found in 1858 in Capua, Italy. The leg was made of bronze and iron surrounding a wooden core, but it was destroyed in 1941 “during an air raid on London.” 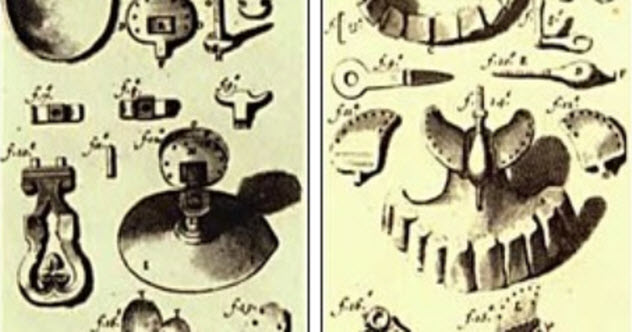 It appears that the famous Greek orator Demosthenes (384–322 BC) “may have used pebbles to obturate [fill in] a congenital cleft lip and palate.” Since then, other obturators have been designed for a variety of uses. In the mid-18th century, such a device “was inserted into the palatal defect [followed by a] pair of mechanical wings [that] were made to contact the superior surface of the palate through a turnkey mechanism operated by the patient.”

The late 18th century introduced obturators similar to those used today. One such device was inflated with water to fill the maxillary defect. In 1893, President Grover Cleveland (1837–1908) was fitted with “a vulcanite obturator to close a defect resulting from surgical resection of a malignant maxillary tumor.” 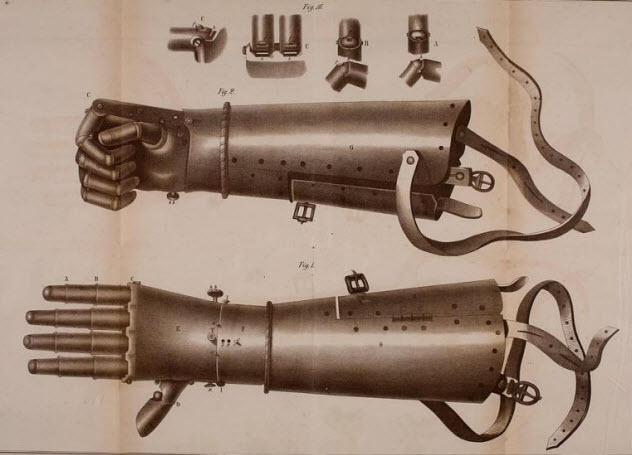 Pliny the Elder (AD 23-79) wrote of a prosthetic right arm made for a general so that he could hold his shield in battle during the Second Punic War (218–200 BC). However, it wasn’t until the early 1500s that the art of making artificial arms began to reflect details such as the “nail beds and knuckles of [the] hand.” This was the case when an artificial arm of iron was fashioned for 24-year-old Gottfried von Berlichingen (1480–1562), who lost his arm to a cannonball in the siege of Landshut in 1504.

Gottfried’s artificial arm was secured by leather straps fixed to the end. Articulated fingers could move and spread apart. The hand could close in a fist. Although the limb must have been heavy, the increased mobility of its joints was an improvement over earlier prosthetic arms. 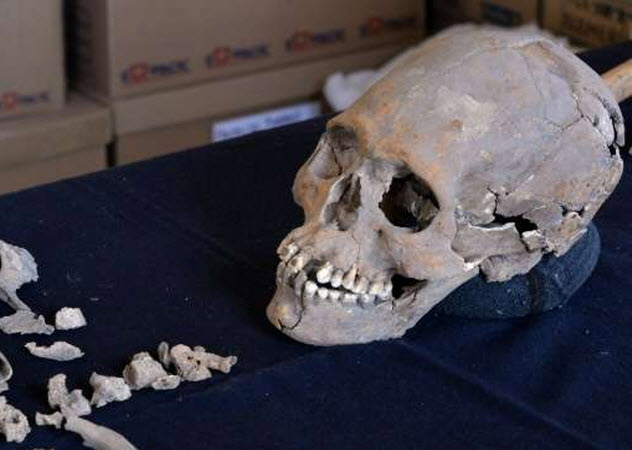 The 1,600-year-old skull of a 30- to 45-year-old, upper-class woman found in Teotihuacan (50 kilometers (30 mi) north of Mexico City) shows prosthetic dental work. Her upper front teeth are surfaced with “two round pyrite stones” indicative of the Mayan regions of southern Mexico and Central America. This shows that she was a foreigner rather than a Mexican native. Her lower jaw also sports an artificial tooth made of serpentine. 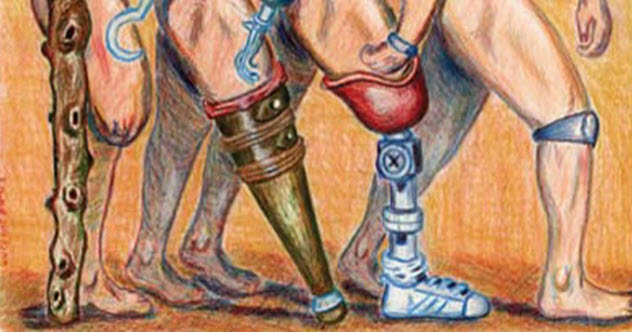 The ancient Greek historian Herodotus (484–425 BC) wrote of one of the world’s first prosthetic feet. Sentenced to death, a “Persian seer” escaped by cutting off his own foot and replacing it with “a wooden filler” that allowed him to walk 50 kilometers (30 mi) to the next town.

Usually, prosthetic feet were included as parts of artificial legs, largely because amputations were too crude to allow the replacement of only a foot. In 1843, this situation changed. Sir James Syme (1799–1870) “discovered a new method of ankle amputation that did not involve amputation at the thigh.” As a result, an amputee required only a prosthetic foot, rather than an artificial leg, to recover the ability to walk. 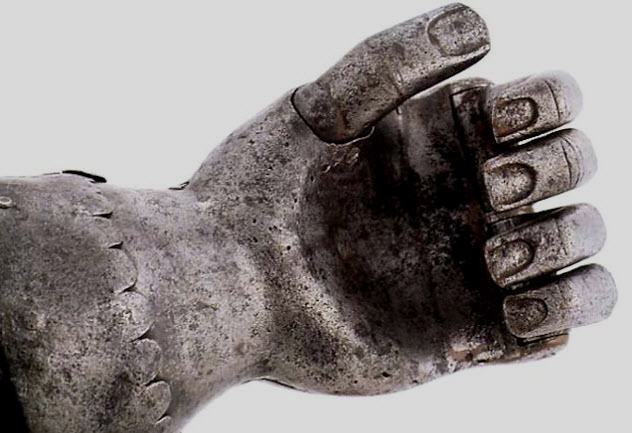 Several bizarre antique prosthetic hands of various designs were made in medieval and early modern times. In about 1580, a German prosthetic hand made of iron featured distinct fingernails and wrinkles over its knuckles. It fit like a glove over a metal framework that slipped over the forearm.

In the latter half of the 19th century, artificial Victorian hands were made of metal. They were relatively flat and decorative, but the joints of the thumbs and fingers were articulated so they could be moved. In at least one prosthetic hand, the wrist could be moved up and down to some extent.

Often, the hands attached to an armature which was connected to a sort of sleeve that slid over the arm or the remaining stub. The hand of a 16-year-old girl was made of “wood, leather, and textile” and was equipped with wooden joints that allowed the fingers to curl or extend. 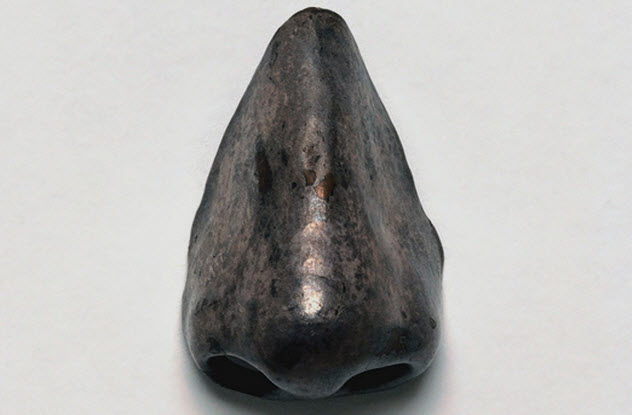 A brass nose attached to a pair of eyeglasses mounted to a metal loop that fit over the top of the head was a prosthesis for a mid-19th century syphilitic woman who lost her nose to the ravages of the disease.

A little over 300 years earlier, Tycho Brahe (1546–1601), the Dutch astronomer, lost his nose in a duel in 1566. As a result, he “wore a brass prosthesis” for the remainder of his days. Although it was noticeable up close, it covered a gap in the bridge of his nose. 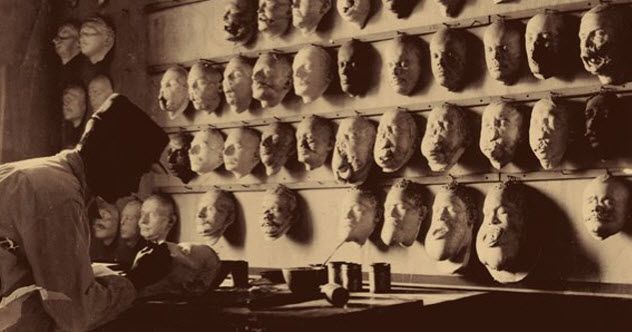 Program founder Francis Derwent Wood (1871–1926) used his artistic ability to create lightweight masks that bore customized prewar portraits of the wounded soldiers. Although they had aesthetic value, the prosthetic masks also benefited the men psychologically by restoring their self-reliance, self-respect, confidence, and pride in their appearance.