What we used to know as a single archaeological site consisting of a few rings of monoliths has been transformed into a huge prehistoric complex covering several square miles at least. The recent advancements in radar technology, which was used in locating these ruins, will no doubt shed much more light on Stonehenge in the months and years to come. This list is a compilation of some of what the British scientists have discovered so far.

10Stonehenge Is Not The Main Monument 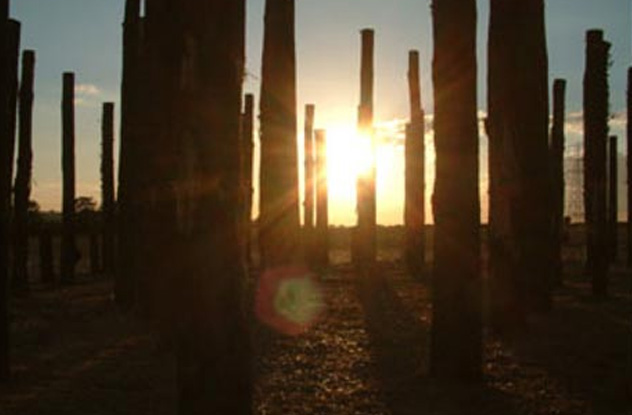 The Stonehenge Hidden Landscape Project is a group of British archaeologists who are mapping the Stonehenge area. In 2015, they announced the discovery of an entire complex consisting of multiple monuments, all situated within a couple miles of the world famous Stonehenge site. One of these structures was a huge building made from timbers that is thought to have been used to prepare the dead for burial, including defleshing operations.

Making use of new imaging techniques, the scientists have discovered prehistoric pits, some of which are aligned to the path of the Sun. The project so far has already added much information on Bronze Age, Iron Age, and Roman settlements that were once in the area, making it one of the biggest Bronze Age archaeological sites on the planet. 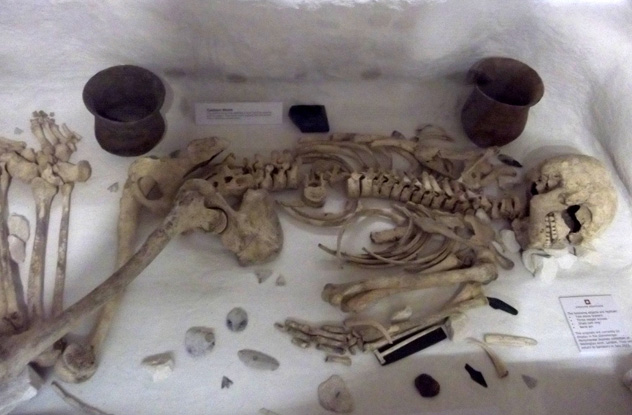 In a grave was found a gold earring which may be the oldest-known handmade gold object excavated in Britain. Extremely rare, these gold objects usually occurred in pairs.

The grave is one of the richest early Bronze Age burials ever discovered in Britain. The occupant is known as the Amesbury Archer and may possibly even have been the king of Stonehenge. A black wrist band used for archery and tools were discovered with him, along with an exquisite copper knife. Behind him was the tusk of a boar, a collection of flints, and a Beaker pot, a type of Bronze Age vessel. 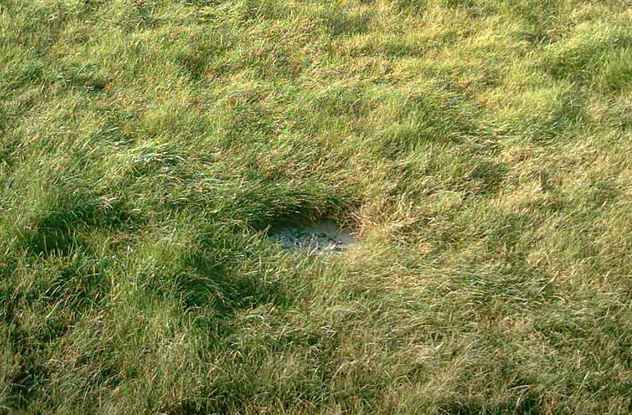 The Aubrey Holes are 56 pits discovered at Stonehenge in 1920, named after the 17th-century antiquarian John Aubrey. Thirty-two of these were excavated between 1920 and 1924, with two more in 1950.

The Aubrey holes contained mostly prehistoric debris with veins of cremated ash and bone. Some 60 individual discoveries of cremated remains have been excavated and recorded at Stonehenge, representing some 50 individuals. Most of this skeletal evidence was excavated from Aubrey Hole Number Seven, but it has been suggested that in total, as many as 240 individuals may have been interned at Stonehenge, which would make it by far the largest Early Bronze Age cemetery in the British Isles. 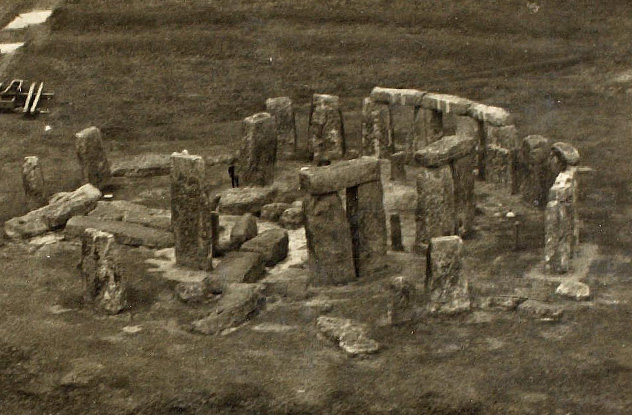 The first scientist to associate astronomy with Stonehenge was Reverend Edward Duke, who described the monument as “a planetarium full of significant astronomical alignments.” Most of his ideas were somewhat mystical and not very scientific.

Realizing that on the summer solstice in the second and third millennium BC the Sun rose precisely at the point of the main axis, Sir Norman Lockyer became the first to identify the purpose for the orientation of Stonehenge. Gerald Hawkins in his book Stonehenge Decoded explains how he found 165 measurable points that astronomically align with the Moon and Sun and not with any stars or inner planets visible to the naked eye, which include Saturn, Jupiter, Mar, Venus, and Mercury. He also found that lunar eclipses could be accurately predicted via a system of moving stones around the Aubrey Holes.

Formally announcing his conclusions about how the ancients moved the Stonehenge monoliths to the Society of Antiquaries in London in 1921, geologist Herbert Thomas offered a theory involving intrepid Neolithic travelers. These travelers first quarried and then carried off multi-ton bluestones from the tops of tall jagged crags in western Wales to Stonehenge, almost 400 kilometers (250 mi) across the prehistoric terrain.

There have been multiple attempts at replicating the transportation of similar but much smaller megalithic stones by using a wooden sled or wooden rollers to move them along. These methods have proved to be problematic at best, even when moving smaller stones.

5Theories On The Purpose Of Stonehenge

An ancient people, without the wheel or steel, created a masterpiece of monolithic construction tens of centuries ago, and they did it in what is now modern-day Wiltshire England. These ancient people erected multi-ton sandstone monoliths in a complex circular pattern that has baffled scientists since the day it was found.

Middle-age legend has it that the magical wizard Merlin conjured up the site in the 12th century. Contemporary rumors are that UFOs visit the site on a regular basis. However, there are several plausible theories that are based on solid science. They range from a burial site, to a place of healing, to a sound stage, and an astronomical observatory and celestial calendar, or possibly even an example of a civilization-wide morale-building exercise. 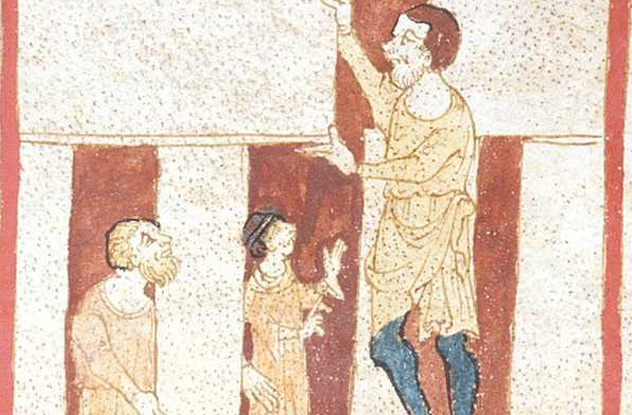 One theory says Stonehenge was built for ritualistic purposes by the high priests of the Celts—the Druids. John Aubrey, the scientist the Aubrey Holes were named for, was one of the first to theorize that the Druids were the builders, along with Doctor William Stukely a century later. Stukely was so convinced that the Druids were responsible for Stonehenge that he became one himself.

Modern carbon dating techniques have disproven this theory by pointing out that the monument predates the arrival of the Druids on the British scene by over 1,000 years. Excavations put the Druids there, who used the site for several reasons, but they could not have constructed it and probably found it as an ancient ruin just as we did. 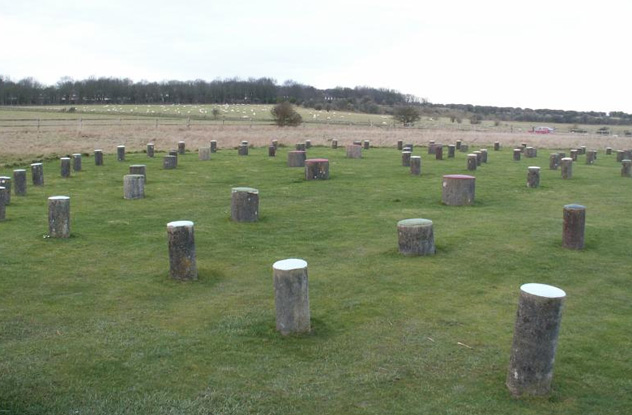 Woodhenge, a Neolithic site constructed sometime around 2300 BC, was at first thought to be a huge burial mound. It is completely surrounded by a ditch and a bank that was almost destroyed by the working of the fields. Aerial photography helped discover the presence of Woodhenge by revealing dark spots in the wheat crop to the scientists. Later excavation proved these dark spots to be places where timbers were set upright into pits in several rings. The third, or outer ring, had timbers set much deeper than the inner rings suggesting they were used to support roofing timbers.

It has also been suggested that the center was open to the air, allowing light into the building, much like the medieval courtyards of later years. A grave was excavated in the center of the site, containing the body of a three-year-old child thought to be a sacrificial victim since the child’s head had been split open by an axe. Woodhenge is only 70 meters (230 ft) from Durrington Walls and less than 3 kilometers (2 mi) from Stonehenge. 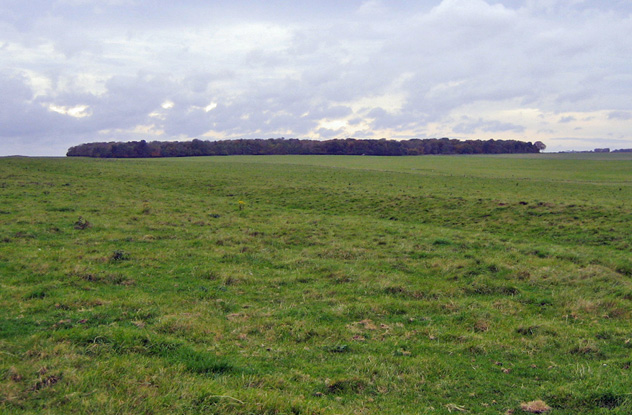 A large ditch thought to have been built between 3100 and 2800 BC, the Great Cursus sits less than 300 meters (1,000 ft) from Stonehenge. This enormous artifact runs in an east to west alignment, dug into the hard chalk.

The purpose of this colossal construction is unknown. Some think it may have been some kind of racetrack, while others think it was some type of precession way possibly used for honoring the dead. 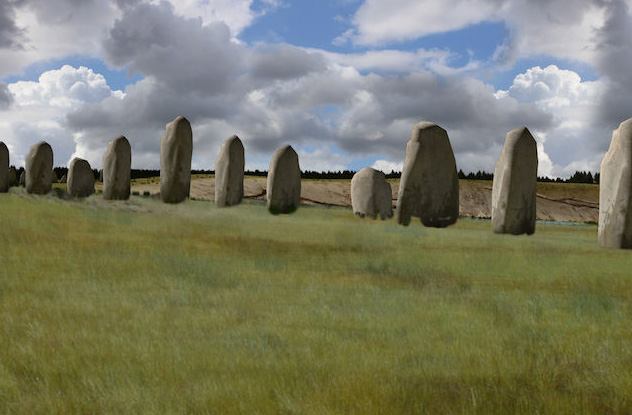 The Stonehenge Hidden Landscape Project in Britain have found part of the largest Neolithic ritual monument ever discovered in the British Isles, an enormous semi-circle made from huge stones. Thought to be 4,500 years old, the megaliths were detected at Durrington Walls. Some of the giant monoliths measure up to 5 meters (15 ft) in length and are located completely buried deep in fertile soil. Researchers said that the monument is very unique and of “an extraordinary scale.”

Duane lives in northwestern Pennsylvania in the United States of America and grew up with a fascination for collectibles like baseball cards, coins, stamps, and old bottles.