Non-professional enthusiasts play a key role in nearly every scientific field. But in the realm of archaeology, such casusal-to-obsessed hobby explorers shine. They have made some extraordinary contributions to history, mostly on their own dime and time. Their efforts enrich history, break records, bring new knowledge and on occasion even prove that a myth was real. 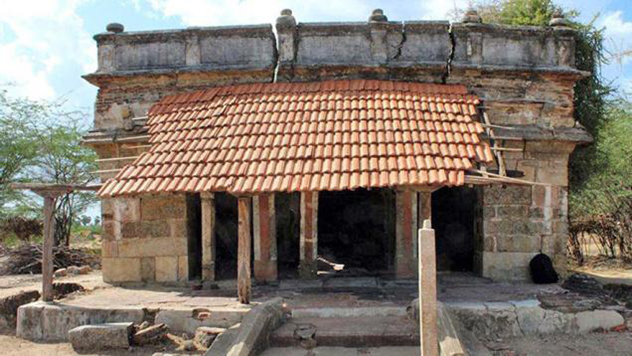 While searching for historical goodies, an Indian schoolteacher came across an old building in a forest. Mr. Rajaguru, an avid follower of archaeology, realized that it was an ancient temple. Once it must have meant something to somebody but when it was found the place was a looted ruin. However, there were still enough wonders to wow any amateur seeker’s heart. It consists of three complex parts: a sanctum sanctorum, mandapam and a flag post. It’s likely age hinges on the sculptures and a stone-carved mural. They are very similar—especially the wall image—to known 9th century Indian art. Located at the tributary of Pambaru, the Jain temple is richly decorated with images of sea life such as fish and crab, possibly in honor of a fishing community. Standing a short distance outside the ruins are pillars depicting two people in the act of worship. 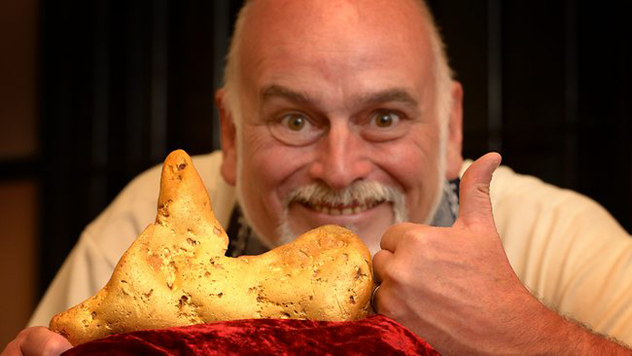 A novice prospector searching the Ballarat region in Australia, found a record-breaking nugget while sweeping the area. Gold has been found in the same vicinity before but nothing matches the size of this monster. The lucky man (who refused to share his identity) took the bling to be evaluated at the Ballarat Mining Exchange Gold Shop. The staff couldn’t believe the size before their eyes. Intact, the 12 pounds (5.5 kilograms) rock was estimated to be worth more than $300,000 but considerably less if melted down. It’s worth lies not in how many pieces of gold jewelry can be forged from the metal but as a complete mineral specimen. It’s size and shape is significantly rare. The previous record from the Ballarat area was a nugget that weighed 8 pounds (3.66 kg). 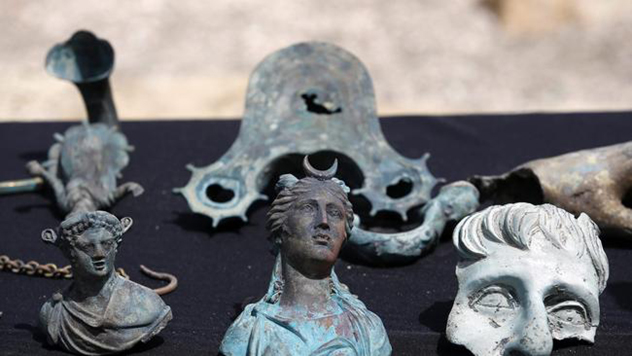 When Ran Feinstein and Ofer Raanan investigated a shipwreck off the coast of Israel, they found a sculpture on the seabed. They initially didn’t think much of it and continued to explore the vessel which had sunk near the ancient port of Caesarea. While they continued to find more sculptures, the pair didn’t yet know it but they had come across a slice of submerged Roman history. The biggest haul in thirty years included lamps and jars, bronze statues, animal effigies and anchors. Coins numbering in their thousands revealed the printed faces of Roman emperors Constantine and Licinius. The priceless items date back to different eras; some belong to the fourth century AD and others were forged in the first and second centuries. Experts believe that a storm had threatened the ship 1,700 years ago and sunk it despite her crew’s best effort to anchor the vessel. 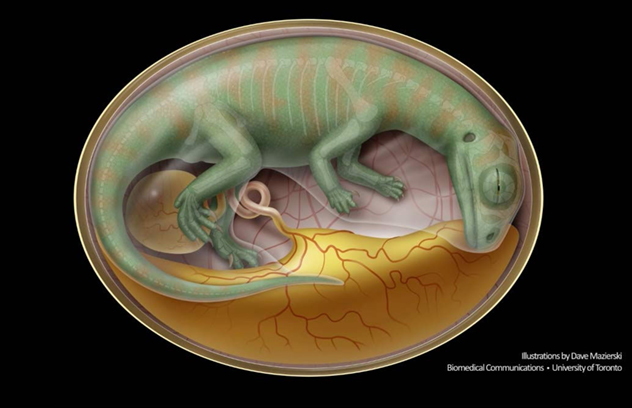 Amateur archaeologist Timothy Huang, a trained chemist, came across something science-changing in Yunnan Province, China. The dinosaur nests contained 200-plus embryonic bones in different stages of development. To follow the growth stages of a species whilst still inside the egg, Lufengosaurus in this case, is something that’s never been possible before. Scientist focused on the tiny femurs and learned two fascinating facts. The thigh bones were very porous inside. Such cavities allow blood to reach growing tissue and the bigger they are, the faster the indicated growth rate. These creatures grew faster than any other mammal or bird embryo today. Secondly, the femurs showed some thickening of the bone – the result of muscles being used. This means that the baby dinosaurs were not only rapid growers but they also actively kicked while still inside their shells. The eggs were laid between 199.6 million and 175.6 million years ago, making them the oldest embryos ever discovered. 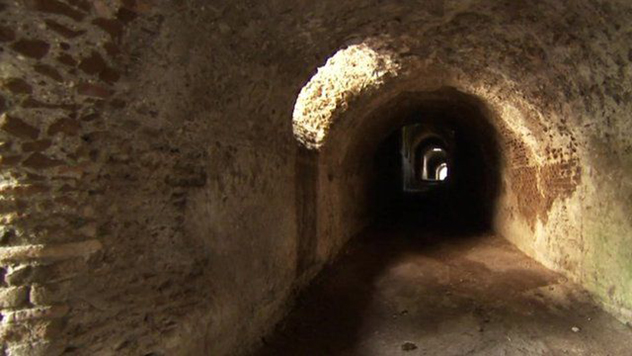 In Italy, the Roman Emperor Hadrian’s villa yielded a surprise—a massive subterranean network of tunnels. Most of it was already known from ancient architectural plans but researchers suspected that the underground had more to offer. They enlisted the help of amateur archaeologists who specialized in rappelling down into the earth. Eventually, the team dug open the first of several unmarked passageways and the mystery began. The charted tunnels most likely helped thousands of servants, slaves and merchants to keep the villa running smoothly without swarming the place. But the purpose of the new section remains unknown. It’s definitely more secretive. First not being recorded and then actually leading away from the estate to an underground roadway. Hadrian, who ruled from A.D. 117 to A.D. 138, might have used them for clandestine meetings or perhaps to be alone. 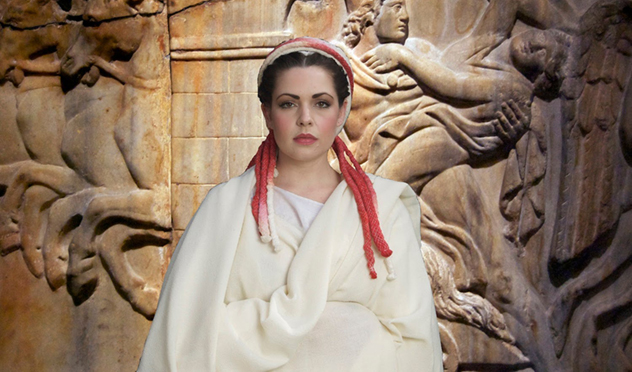 An amateur archaeologist and professional hairdresser found a unique way to blend her two professions. Janet Stephens recreated the oldest Roman hairstyle and not just any old ponytail. Her diligent detective work revealed the sini crenes, the braided hairstyle of the Vestal Virgins. They were the six most important women in Rome and their trademark tresses symbolized chastity. In time their complex hairdressing became lost knowledge. Only two busts of Vestal Virgins exist with enough detail and Stephens investigated each braid-line to see where they began on the scalp. Slowly, the sacred weaving unraveled. Waist-length hair would be parted in sections, each of those producing six braids. Hairline hair (twisted around a cord) was fastened at the nape of the neck. In pairs, the braids were tied at the back in half square knots, their ends folded towards the face and fastened to a cornrow that ran past each ear. A seventh braid, made from leftover locks, was then coiled underneath the knotted plaits. 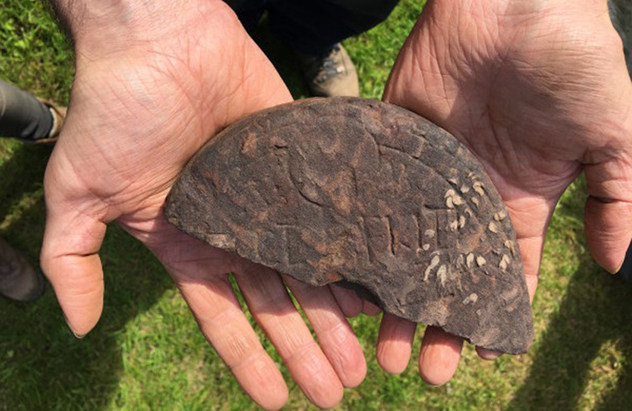 One of the earliest monasteries built in England left no clue as to where it once might have stood. The only known facts stated that it was erected in 635 AD and most likely in the vicinity of a later-era medieval priory. Despite the fact that the priory’s remains were known and visible in Lindisfarne, the actual monastery remained elusive. In a crowd-funded effort, a search was organized nearby and one of the civilians who assisted at the dig made a momentous find. A rare grave marker from the 7th to 8th century linked the excavation site to the sought-after ruins. It belonged to the period the archaeologists were looking for and the name on the stone ended with “frith”, something that was common to Anglo-Saxons, the community believed to have lived there at the time. 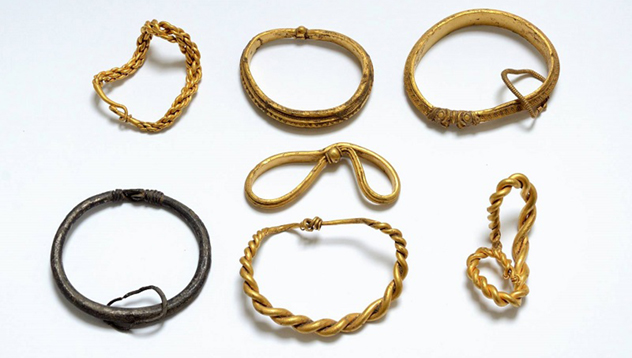 When amateur archaeologists found seven bracelets in a field, the event was remarkable for Denmark. Six were gold (the remaining one was silver) dating back to 900. The precious yellow metal had a total weight of 900 grams (1.98 pounds), making it the largest Viking gold cache discovered in Denmark. Gold from that era is scarce, unlike Viking silver. Finding one such bangle is something but six together is unprecedented. The first was found within ten minutes and the archaeologists were shocked when they soon unearthed more. The bracelets could have been made for an elite person since two resembled the “Jelling” style—an upper class design. How they ended up in the field is unknown but perhaps they were part of a ritual burial or a treasure hideout. Years before, in 1911, the same field yielded a 67-gram gold chain, most likely part of the same jewelry collection. 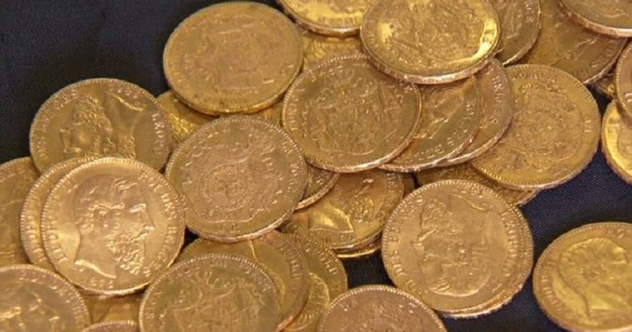 World War II era coins with a value of $65,000 was found buried under a tree. Their likely origin was Germany’s central bank because two swastika-bearing seals with the words “Reichsbank Berlin 224” were found with the gold. The coins were a mix of French, Belgian, Italian and Austrio-Hungarian currency from 1831 to 1910. Experts believe the money, most likely part of the bank’s gold reserves, was stolen by an insider or someone who got his hands on the hoard while it was being transported. Either way, it appears that the bounty was buried near the end of the war. It laid hidden under the hollow tree, which itself is only about fifty years old, until it was found by an amateur archaeologist a few years ago near Lueneburg, northern Germany. 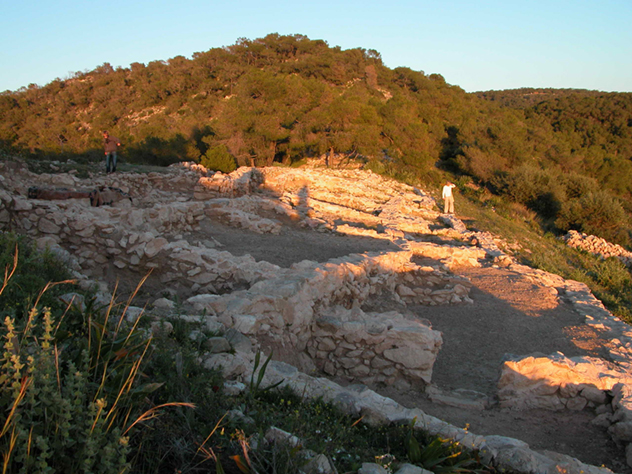 A self-styled British archaeologist believes he’s found Ithaca, the island home of legendary hero Odysseus of Homer’s epic poem The Odyssey. Robert Bittlestone used field trips and satellite images to search for the site in Cephalonia, western Greece. In the poem Odysseus returns home to an island, which is described by Homer. Bittlestone claims to have matched the poem’s geological description to a modern-day Cephalonia peninsula known as Paliki. While a peninsula is not an island, Bittlestone suggests it once was, and that earthquakes filled up the channel that had kept Ithaca separated from Cephalonia. He identified 26 Odyssey locations in northern Paliki just to drive the point home. If he sounds like a lone nut, he’s not. Bittlestone is backed by some serious supporters, including a Cambridge University professor and a geologist from Edinburgh University. 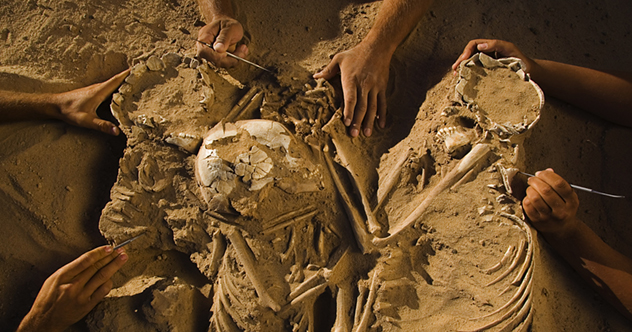 Archaeology is a fascinating topic that we have covered time and again on Listverse. Here are some other lists you will probably enjoy: