SEE ALSO: 10 Unsettling Cartoons From Around The World Meant For Children 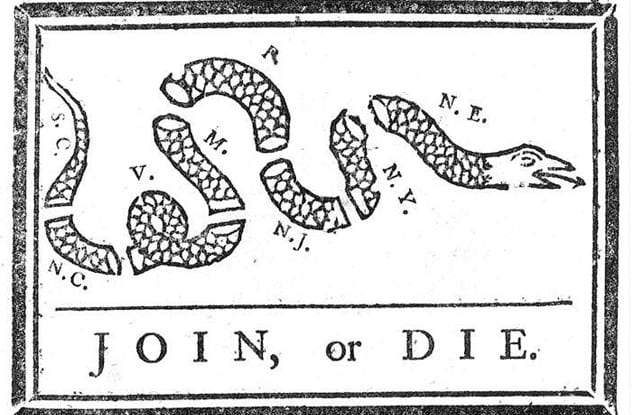 “Join, or Die” is recognized as the first political cartoon published in America. The drawing of the fragmented snake was first printed on May 9, 1754, in Franklin’s Pennsylvania Gazette, more than 20 years before the war for American independence.

While the phrase “Join, or Die” became the battle cry of the American Revolution, the cartoon was illustrated to depict the fractured colonies in support of unifying against French expansion in North America during the Seven Years’ War. Decades later, the image would be used alongside the slogan to unite the colonies against Britain.

9“The Abolition Of The Slave Trade—Or—The Inhumanity Of Dealers In Human Flesh”
Isaac Cruikshank, 1792 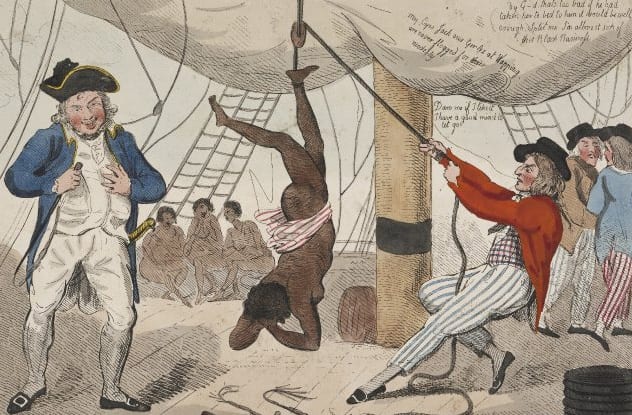 Britain did not abolish slavery until 1833, but the anti-slavery movement was operating in full force in 1792 when Cruikshank’s cartoon was first printed. The image depicts Captain John Kimber, who captained the slave ship Recovery and was accused of torturing and killing a young girl aboard his vessel in 1791. He was charged with murder but was quickly acquitted of all charges.

The cartoon was used by the abolitionist movement helmed by William Wilberforce to further the argument against slavery. Depicted is the inhumane treatment of a 15-year-old African girl suspended above the deck of the ship by her ankle. It was said that she refused to dance naked on the deck, which was why Kimber allegedly tortured and killed her. 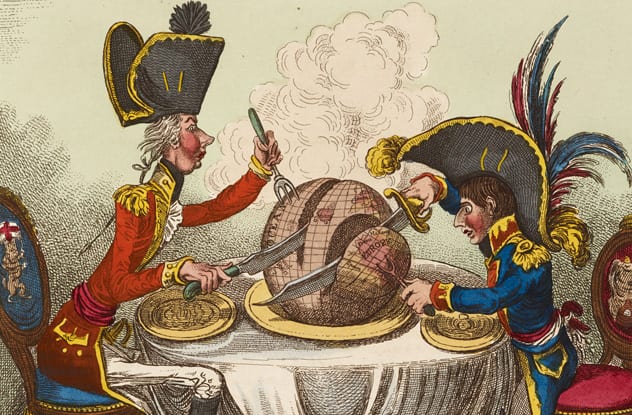 James Gillray fought for England during the Napoleonic Wars, though he never picked up a weapon other than his pen. Often considered the bane of the French emperor, Gillray would illustrate depictions of Napoleon in such a way as to infuriate him.

The “Plumb-pudding in danger” is one of his most famous pieces. It depicts British Prime Minister William Pitt sitting opposite a rather diminutive Napoleon Bonaparte slicing into the globe, each trying to tear off a larger piece than the other. The image ridiculed not only Napoleon but also Pitt, by suggesting that the French and British leaders were more concerned with international dominance than anything else. Napoleon is depicted with an enlarged nose and small stature, while Pitt is made to look extremely skinny and tall. The depictions were not lost on the two leaders, and the image stirred much controversy at the time.

7“A Scene On The Frontiers As Practiced By The ‘Humane’ British And Their ‘Worthy’ Allies”
William Charles, 1812 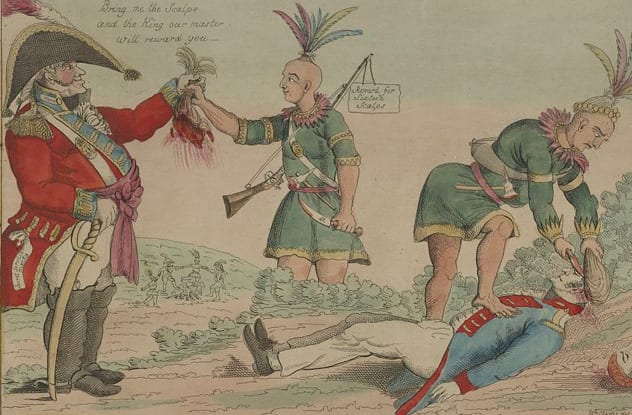 During the War of 1812, Americans adamantly opposed British alliances with the supposed savages, who are depicted in the image scalping an American soldier and handing a scalp over to a rotund British officer. The cartoon was widely distributed throughout the young nation and was often cited when describing British atrocities committed against the Americans.

The image was reproduced in an attempt to stir up anti-British sentiment among the population and may have been inspired by a massacre in Chicago. Following the massacre, British Army Colonel Henry Proctor purchased American scalps from the natives, effectively placing a bounty on them. 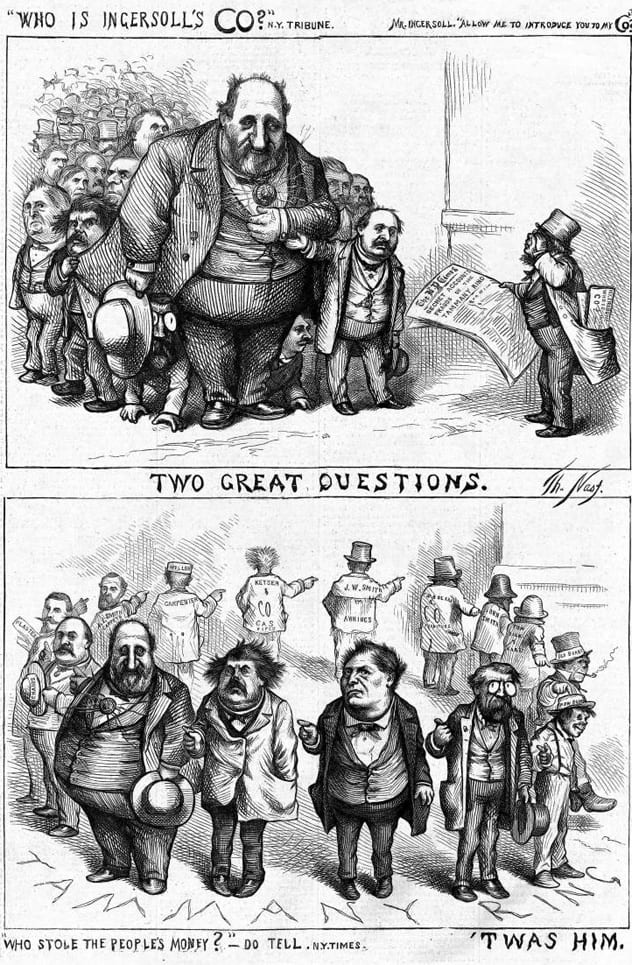 William “Boss” Tweed is depicted in these cartoons drawn by Thomas Nast in what was one of the largest corruption scandals of the 19th century. The Tweed Ring stood accused of pilfering the public coffers via kickbacks, extortion, and other methods totaling $30–200 million. The scandal was so big, most people could not believe the numbers reported in the New York Times.

As the scandal began to take hold and these images were reprinted for more to see, Boss Tweed reportedly said, “I don’t care a straw for your newspaper articles; my constituents don’t know how to read, but they can’t help seeing them damned pictures!” 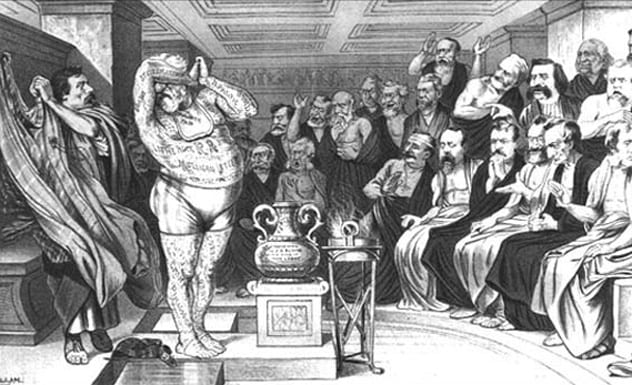 Though it isn’t remembered today as being as scandalous as modern politics, the US presidential election of 1884 was very contentious. Famed cartoonist Bernhard Gillam first created “The Tattooed Man” in the satirical journal Puck in 1884 to depict then-Republican candidate James G. Blaine as a man tattooed with all of his political sins covering his body.

Though it was meant as satire and not a personal attack, the cartoon was so popular, Gillam made an additional 20 more for the series. Due in large part to the public’s adoration of the character and the connection to Blaine, the election was decided in favor of the Democrats. Blaine’s biographer, David Muzzey, said, “It is doubtful if any cartoon in our history ever had the vogue and influence of Gillam’s Tattooed Man.” 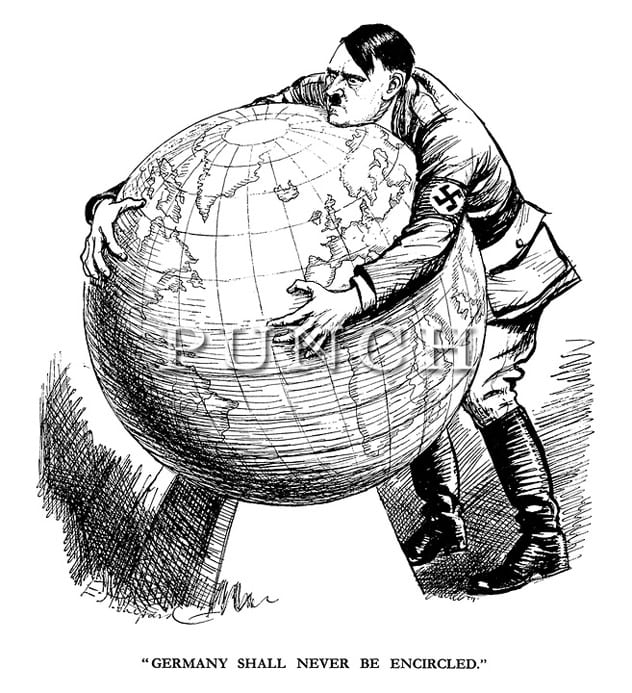 Ernest Howard published this cartoon in Punch Magazine in late 1939, depicting Adolf Hitler trying to put his arms around the globe. The cartoon was published shortly after the Munich Agreement, which allowed for Germany to annex portions of Czechoslovakia, fell apart when Germany invaded Poland.

The image clearly shows Hitler’s desire to expand his reach outward with the caption “Germany shall never be encircled” suggesting it would encompass all the enemy lands surrounding it and retain complete control of Germany no matter what. Punch was famous for its satirical depictions of world leaders in political cartoons, and this was one of its most famous and widely disseminated images of the war. 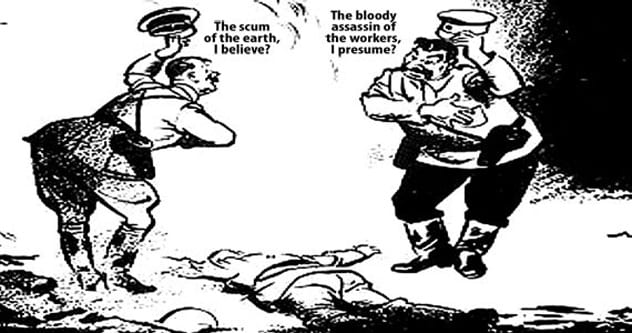 Adolf Hitler had no short supply of enemies, but few got under his skin like cartoonist Sir David Low. During the war, Low drew Hitler as a humorous figure who looked ridiculous.

“Rendezvous” was published in September 1939 as a way of satirizing the Nazi-Soviet Pact, something the West saw as a marriage of convenience that would lead to ruin. The cartoon depicts the two leaders meeting at a crossroads above the body of a fallen soldier. The greetings, “The scum of the Earth, I believe” by Hitler and Stalin’s “The bloody assassin of the workers I presume” shows exactly what Low thought about each.

Low’s work was so successful that the Nazi party petitioned the British government to restrict his work in 1937—a move that backfired and only made Low’s work more renowned. 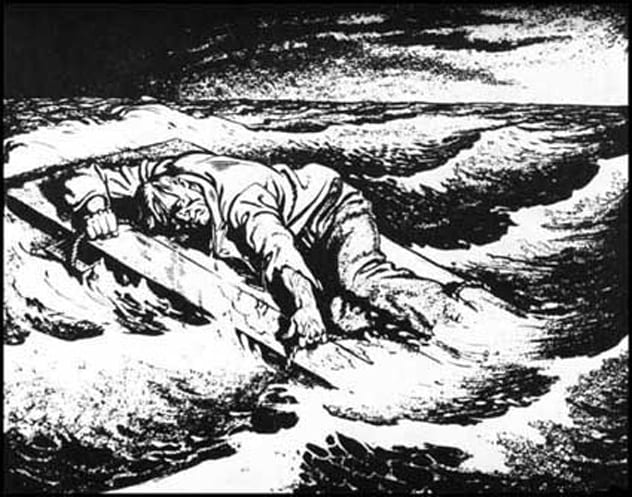 Philip Zec’s cartoon printed on March 5, 1942, in The Daily Mirror was received by the British government as truly insulting. The government had recently increased the price of petrol, which spurred Zec to illustrate a torpedoed sailor lying on a raft with oil smeared on his face. The caption read, “Don’t waste petrol. It costs lives.” Winston Churchill felt that the sailor’s life was sacrificed on the altar of profits for the petrol industry.

The cartoon earned the paper a reprimand from the government after initial plans to shut it down were reconsidered in a debate at the House of Commons and Zec was investigated by MI5. 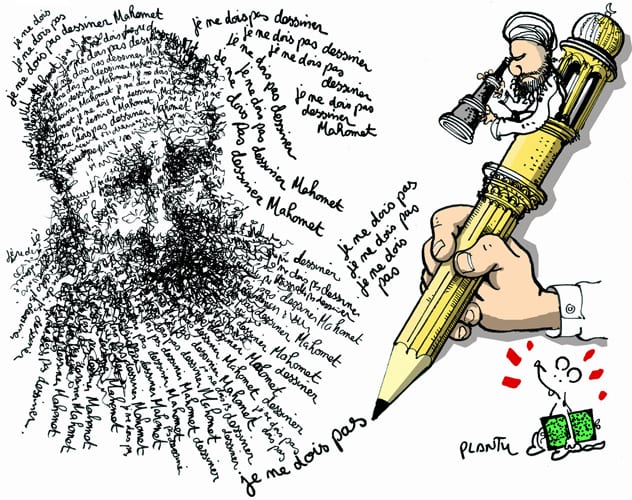 There were many cartoons between World War II and the present to choose from for this list, but none were as provocative as the Plantu illustration “A Graphic Sentence” published in 2006. The depiction of the Prophet Muhammad is forbidden in the Muslim religion, which has led to riots and murder in some places. A controversy was brewing over several publications depicting the Prophet, so French magazine Le Monde commissioned Plantu to illustrate the controversy for their feature article published on February 3, 2006.

The image shows a hand holding a pencil topped with a minaret and a turban-wearing man peering down with a telescope at the words. The sentence “I must not draw Muhammed” is written again and again until the image of a bearded man in a turban can be seen from the words. The drawing stirred controversy where one was already swelling and raised international awareness to the issue unlike ever before.

Jonathan is a graphic artist, illustrator, and game designer with a few independently-published games through his game company, TalkingBull Games. He is an Active Duty Soldier and enjoys researching and writing about history, science, theology, and many other subjects.