Schizophrenia can be a real-life horror story, far more terrifying that any supernatural phantom. Schizophrenics are real people living with real, haunted minds. They may even become trapped, living through their own personal terror. 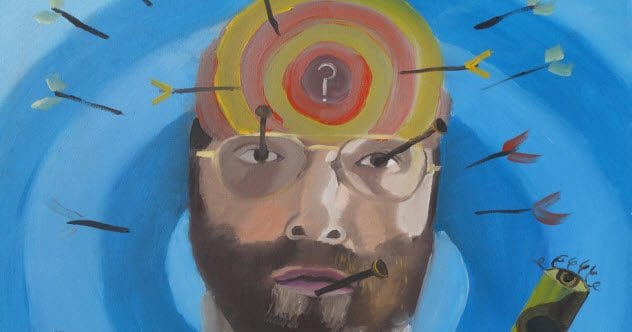 As his schizophrenia worsened, Bryan Charnley spent the last year of his life experimenting with different doses of medication and drawing self-portraits. He drew a note on each portrait to explain his thoughts, which revealed the torment inside his mind.

His first portrait was a realistic picture of his face. For the second portrait, he added vibrations to represent the thoughts escaping from his head. “The person upstairs,” Bryan’s note explained, “was reading my mind.”

Shortly after, Bryan cut his thumb and splattered the blood on the canvas to show his mental pain. He often drew himself with a nail in his mouth or brain, representing his struggle to communicate normally with others.

His last picture was a just a streak of red, yellow, brown, and purple. He painted it and then killed himself, the last splash of colors still sitting on his easel as his final note to the world. 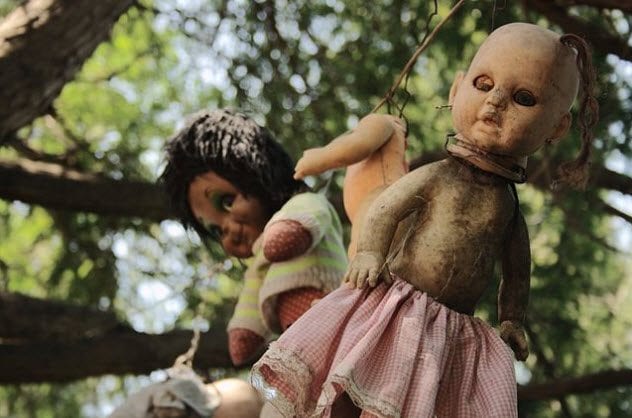 On an island south of Mexico City, the trees are decorated with hundreds of dolls with severed limbs and decapitated heads, which hang off other branches. Don Julian Santana Barrera started putting dolls in the trees after finding a drowned girl in the water. When her doll came floating down the river behind her, he hung it in a tree as a memento to the girl.

Today, tourists can visit the island and see the hundreds of spirits that haunted Barrera’s mind, manifested physically as broken dolls hanging from trees. 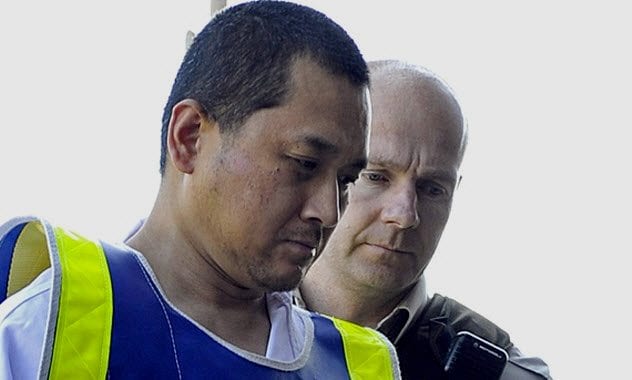 Vince Li made headlines around the world when he stabbed and cannibalized an innocent man, Tim McLean, on a Greyhound bus. But an equally terrifying story was happening inside Li’s mind.

On the bus, Li became convinced that the voice of God was telling him that McLean was a deadly force of evil. Li panicked and began fighting for survival against a demon of his imagination.

When the officers came, Li told them, “I have to stay on the bus forever.” He believed that God would not let him leave. He had no recollection of desecrating McLean’s body and refused to believe it had happened.

When the facts of the case were presented to Li, a sliver of his mind had to face the reality of what he had done. Throughout the court case, his only words were, “I’m sorry. I’m guilty. Please kill me.” 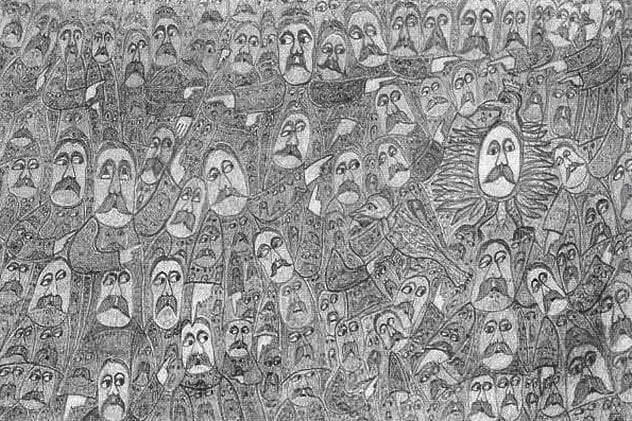 During World War II, Polish artist Edmund Monsiel hid from the Nazis in his brother’s loft, terrified that they would find and kill him. Even after the war ended, he wouldn’t leave and refused to talk to anyone outside his room.

God, Monsiel believed, had chosen him as His emissary. Monsiel drew pictures of his hallucinations, at first showing Christ and the Devil before him. Soon, though, his work started to be full of faces. For Monsiel, every blank space in the walls before him was filled with watching eyes, staring at him with the face of Christ.

Monsiel died in the attic alone nearly 20 years after the war had ended. By the end, he had drawn 400 pictures. 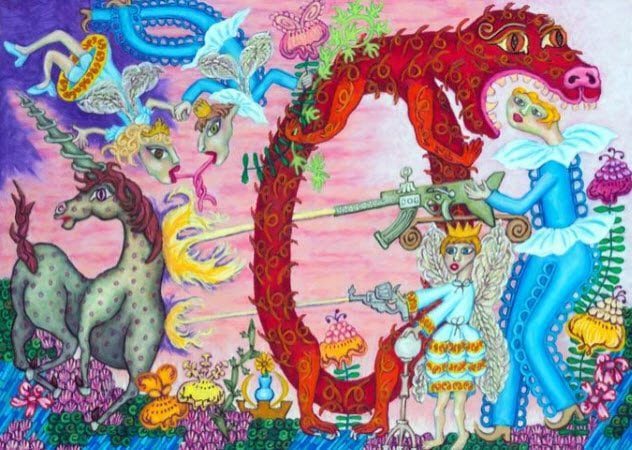 “Be aware of the presence of the Shadow in my art,” Karen May Sorensen says on her website. “Every person has a hidden Shadow aspect to their personality. I just happen to bring my Shadow out into the light of day.”

Sorensen spends almost all her time in her home, drawing pictures and living through the symptoms of her schizophrenia. She compares herself to a monk in a stone room with a single window to the outside world that is too high up for him to see. The monk, she says, can’t see the world outside, but he can “roam free across vast interior landscapes with the Lord as his companion.”

Giving us a glimpse into her interior landscapes, her art shows a world dominated by sexual and phallic images—often violent and perpetrated by malevolent men. “There is a threat,” she writes about her own sexual experiences. “There is some fear.” 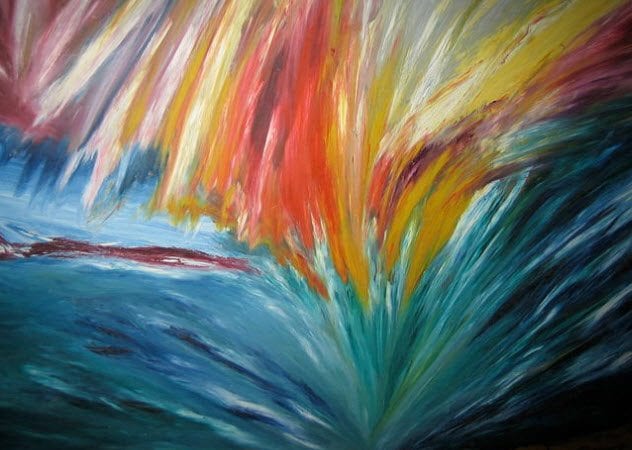 Seeking help for her schizophrenia, Mary Barnes met with Joseph Berke, a pupil of the influential psychologist R.D. Laing. With Berke, Mary entered into regression therapy to access early memories by bringing her to an infantile state.

But Barnes went further back than most. During therapy, she started smearing feces against her own body and against the walls. Desperate to get her to stop, Berke presented her with paints and urged her to use them instead. Barnes soon discovered that rubbing the paint with her fingers let her to create the beautiful images she saw in her mind.

For Barnes, this was the only way to express her reality to the world. 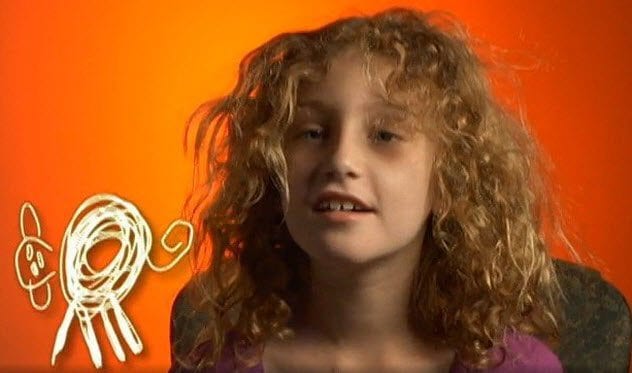 January Schofield showed symptoms of hallucinations from her seventh day of life. By her third birthday, she was chasing an invisible cat named “400” across the room, convinced that it was real.

Soon, she had hundreds of imaginary friends and had withdrawn from all her real ones. She became violent, attacking her parents and baby brother—sometimes until she drew blood. Later, she revealed that 400 scratched her if she didn’t hit people.

According to January, an army of rats feared her baby brother and ordered her to drive him away. One time, January tried to eat him, the whole time telling him, “Bye-bye, Bodhi. I love you.”

In time, January’s parents had to get two apartments to keep Bodhi and January apart. Their lives have calmed somewhat since then. Her father says that January now “only needs to hit once so that the voices will stop screaming [and] 400 will stop scratching her.” 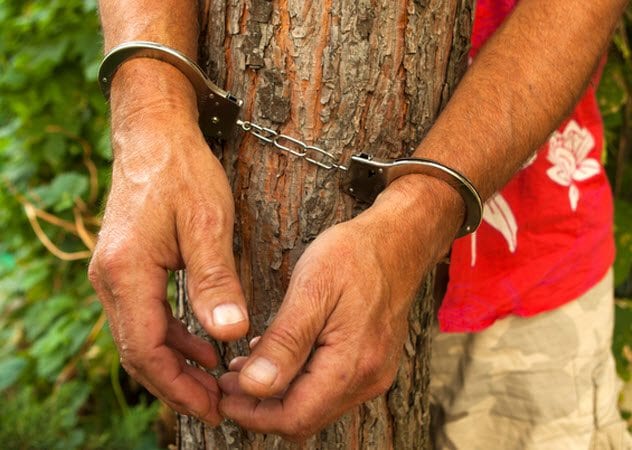 Richard Sumner was an artist who painted scenic landscapes until schizophrenia started to plague his mind. Unable to work or function in society, Richard had to rely on the support of his family, which was hell for him. His sister explained, “He hated to be thought of as a parasite.”

Depressed and worn out by being a burden on his family, Richard went into the woods and handcuffed himself to a tree. He had intended to die there, hoping that no one would find him. But he lost his nerve and unshackled himself.

Richard tried this two more times. The third time, he couldn’t reach the key. He started wrestling with the locks, leaving deep marks in the tree and in the flesh of his wrists. But he couldn’t escape. Slowly, he wasted away, locked to a tree.

Three years later, a woman walking her dog stumbled upon Richard’s skeleton, still locked up in the woods. 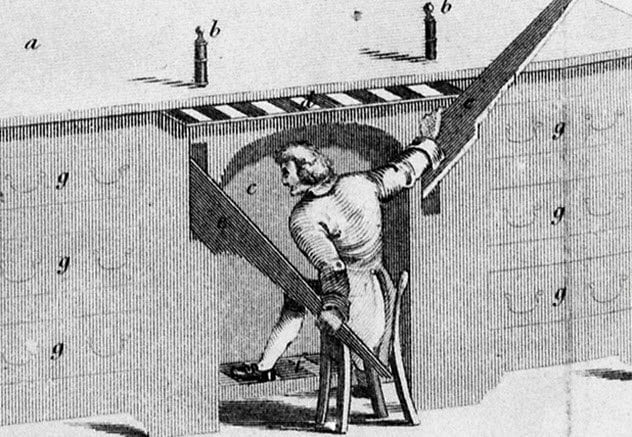 James Tilly Matthews was confined to Bedlam asylum in London during the Napoleonic Wars. The world, he insisted, was overrun with magnetic spies and machines that were brainwashing people to send Europe to the brink of war.

James described a brainwashing machine called the “Air Loom,” which he believed was trying to control his mind. Like many schizophrenics, James believed that an external force in his reality was influencing his mind.

For James, this great machine sent out rays and gases to brainwash him and the politicians of the nation. He drew incredibly detailed diagrams of the machine, which was built to plunge the world into chaos. He claimed that the pockmarked “Glove Woman” operated the machine. 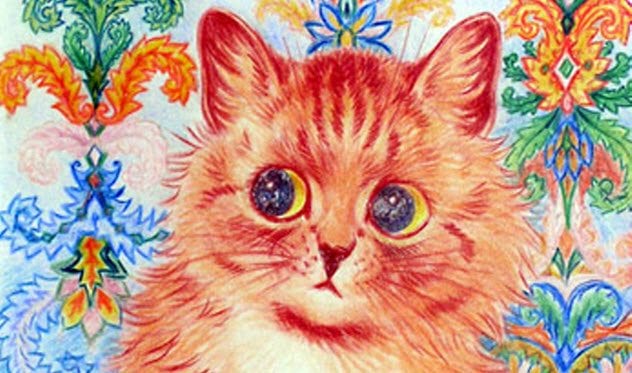 Louis Wain may have been driven to madness by his own cats. He spent his life surrounded by them and illustrating them. However, he didn’t know that a cat’s excrement contains a parasite called Toxoplasma gondii, which can cause hallucinations. In Louis’s case, the hallucinations were usually believed to have been symptoms of schizophrenia.

Louis kept drawing cats even when his mind started to degrade. He couldn’t stop—his family was relying on the money he earned through his work.

As his hallucinations worsened, Louis’s art changed. His early paintings are realistic pictures of cats, but his later paintings became increasingly psychedelic. The cats started to absorb into the patterns of the background, turning into electric kaleidoscopes of color.

In his art, we can see the slow dissolve of his perception of reality and the way the real world gradually slips away as the untreated symptoms of schizophrenia worsen.