The ancient world remains shrouded in mystery, with records and artifacts shining a limited light on our ancestors. Oddly, certain motifs seem popular in many ancient societies. However, no one can say for sure how they spread or what exactly they mean.

10The Master Of Animals 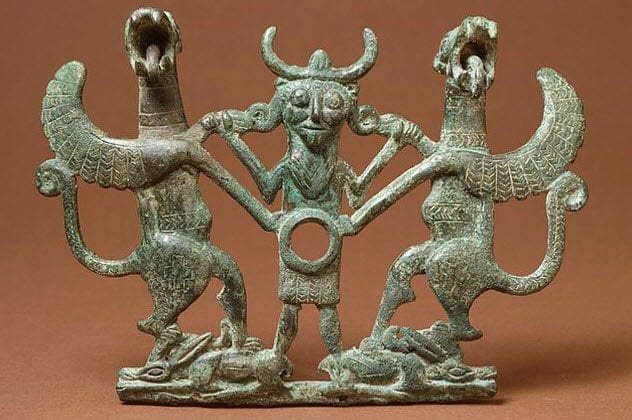 The Master of Animals depicts a man (or woman) flanked by two animals, which he holds in a show of dominance. The specific animals vary, from snakes to bulls to lions. One of the oldest examples, a 5,000-year-old seal from Uruk, shows a figure holding two goats.

For 3,000 years, the symbol was borderline ubiquitous, appearing on everything from Bronze Age Mongolian petroglyphs to bronze vessels from Roman Italy to the grave goods of sacrificed Afghan queens. The mysterious Indus Valley culture put it on seals, while the Scythians loved it so much they put it on basically everything. Two particularly famous examples can be found on the Gebel el-Arak Knife (from prehistoric Egypt circa 3400 BC) and the Gundestrup Cauldron (from Denmark around 100 BC).

The current theory is that the motif arose in ancient Mesopotamia and eventually became associated with the hero Gilgamesh. How it gained such widespread popularity remains unclear. 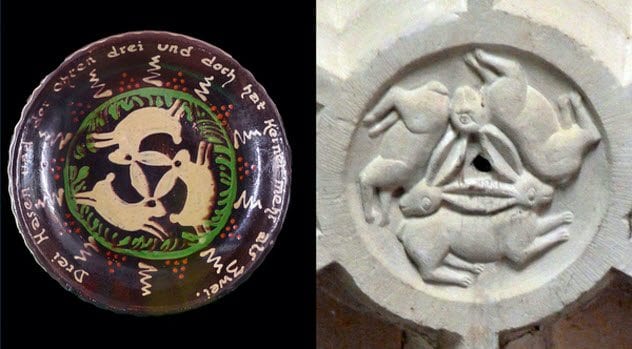 The Three Hares symbol itself is relatively simple. Three hares or rabbits are arranged in a rough triangle so that each appears to have two ears, even though there are only three ears in the design.

The design appears in ancient Buddhist cave temples and on Sui dynasty textiles made in the seventh and eighth centuries. It’s carved into medieval English churches and inscribed on Mongol coins from the era of Genghis Khan. It appears in historic Ukrainian synagogues and the cathedrals of France and Germany.

It’s not clear how the symbol became so popular or traveled so far, and there’s no agreement on what it’s supposed to represent. It may have originated in ancient Persia, where it was particularly popular. But that’s just a conjecture, and the story of the Three Hares looks set to remain a mystery. 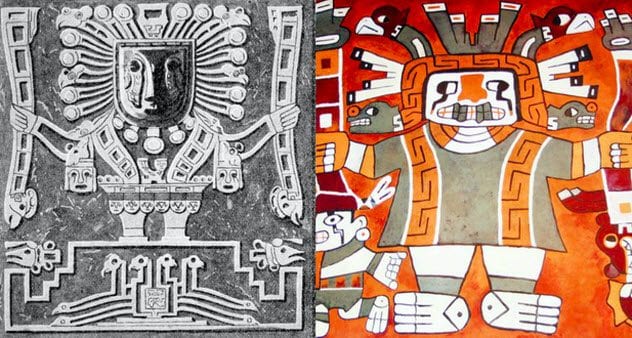 The Staff God image was found throughout the Andes before the Spanish conquest. It depicts a fanged figure holding a staff in each hand. Previously, it was thought that this represented a specific god, but researchers now argue that it is actually a motif, with multiple gods depicted in the Staff God pose.

The oldest image of the Staff God may be on a gourd dating from around 2000 BC. The date remains under dispute, with some archaeologists arguing that the gourd might be 4,000 years old. But the image on it could have been carved much later—the area’s dry climate has been known to preserve such gourds.

The oldest undisputed Staff God image is from around 500 BC. Either way, the Staff God remained an enormously popular design for at least 2,000 years, even though we don’t know why or exactly what it symbolized. 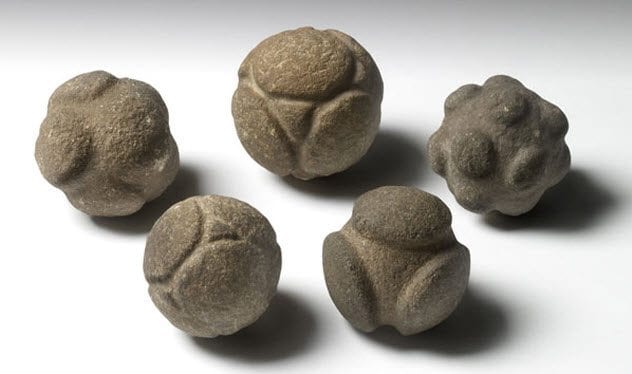 If you ever want to annoy a British archaeologist, ask about the carved stone balls. They have been found in archaeological sites across Great Britain and Ireland (although most are in Scotland), and nobody has any idea what they are.

Most of the balls date to the Late Neolithic, from about 3000–2500 BC. They are almost identical in size and are all carved with circular knobs surrounding the central sphere. The quality of the carving varies, although all show some attempt at symmetry.

There are various theories as to their use, all of them unproven and most of them wildly implausible. We can say that the balls served no practical purpose since they rarely show any signs of wear or damage. Oddly, it’s rare for more than one ball to be found together, although three were discovered at the Skara Brae site in Orkney. 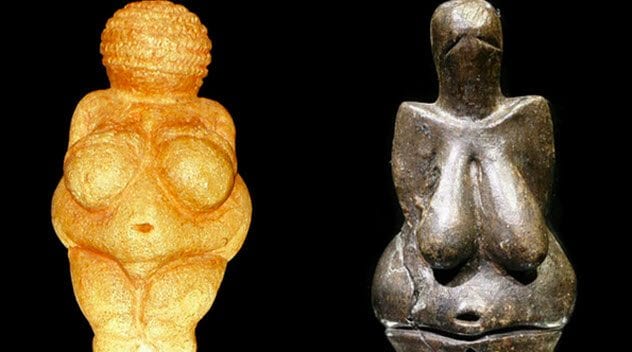 Venus figurines are an extremely popular type of statue from the Paleolithic period, which ended about 10,000 BC. The oldest example, the Venus of Hohle Fels, is believed to be about 35,000 years old. The statues depict women with wildly exaggerated sexual features, including huge breasts, hips, and buttocks. The figurines have been found across Eurasia, from Germany to Siberia.

Although the statues vary in their specific details, they are recognizable variations on a theme. It has been remarked that “considering they . . . were sometimes separated by thousands of years, the general similarity of the sculptures is extraordinary.” 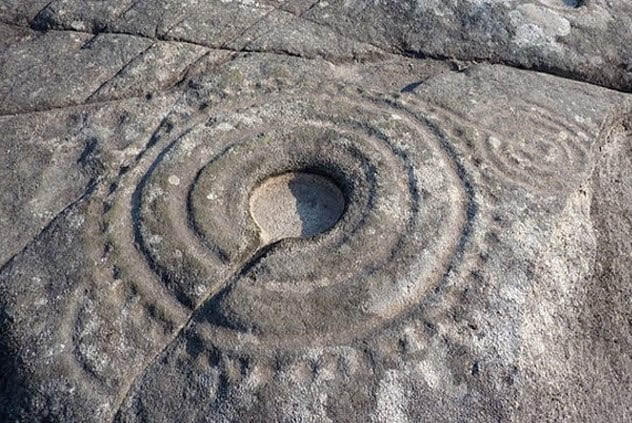 Cup-and-ring marks are one of the most widespread motifs in ancient history. They are a fairly simple design featuring a circular depression carved into stone and surrounded by concentric rings. This pattern has been found everywhere from Ireland to Namibia, Tahiti, and Peru. Although found almost everywhere, it varied in popularity, being very common in western North America but rare in ancient Central America.

In historic times, European cup-and-ring marks were often used for leaving food offerings to fairies or local spirits. However, this piece of folklore is believed to have developed much later since many of the “cup” depressions are carved on the underside of overhangs or on vertically standing rocks. Therefore, they couldn’t have been used for leaving offerings. 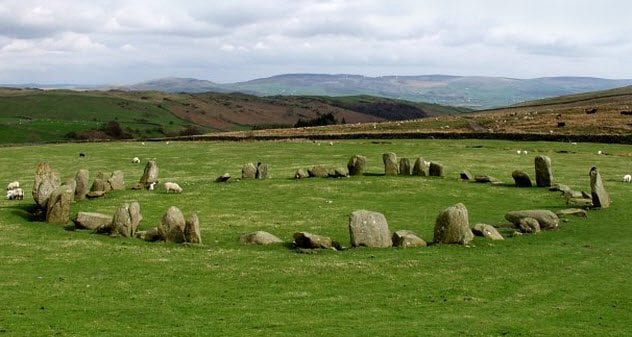 Stone circles are probably the most familiar design on this list, thanks to the fame of Stonehenge. Similar monuments can be found elsewhere in Britain, and the pattern of standing stones in a circle was popular throughout the ancient world. For example, the Taulas of Menorca are standing stones with flat stones balanced on top, similar to Stonehenge. They are believed to have been built at some point between 1000 and 500 BC.

Unlike many ancient motifs, stone circles probably developed independently in many places, although they may have shared a function. For example, the stone circles of Senegal and Gambia were probably built after AD 700, thousands of years after the British stone circles. But it has been speculated that they were used for observing the stars, which is also a popular theory about Stonehenge. 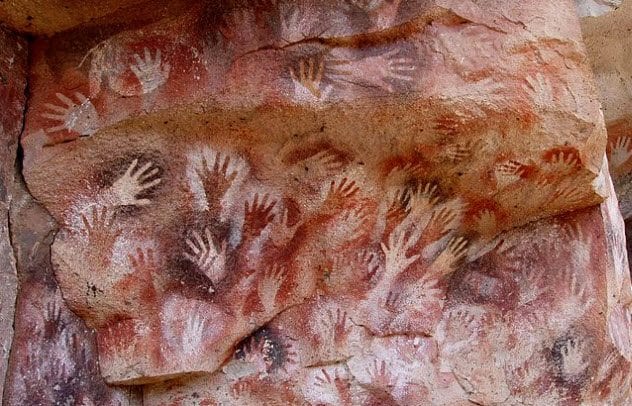 Hand stencils are common features of ancient cave and rock art, found everywhere from Europe to Indonesia to the southern US. They are beautifully simple, created by placing a hand on the rock and then blowing pigment on it, and seem to have been the most widespread art form of the Paleolithic.

Hand art appeared in both Europe and Borneo at the same time, around 40,000 years ago. As a result, some experts now think that Homo sapiens had already developed hand stencils before migrating from Africa rather than developing it simultaneously at opposite ends of Eurasia. However, the geology of our African homeland isn’t particularly good at preserving ancient art, so we’re unlikely to find proof for the theory. 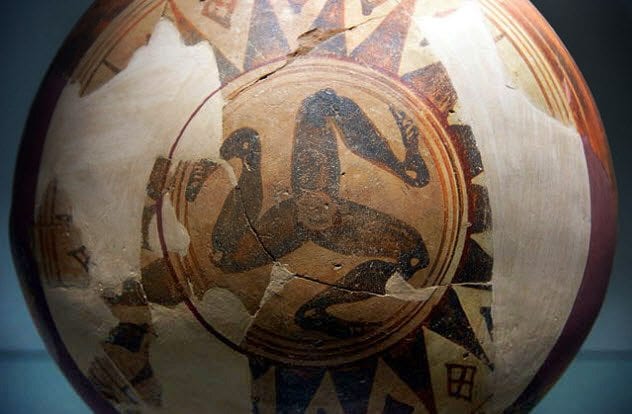 The triple spiral or triskelion is an ancient symbol extremely popular in Celtic art and in ancient Sicily and southern Italy. (Plutarch suggested that it derived from the triangular shape of Sicily.) Some of the finest examples can be found in Newgrange, the famous Irish monument built around 3200 BC.

However it is much older than that, as examples have been found in Malta from at least 1,000 years earlier. In other words, the symbol was thousands of years old when the pyramids of Egypt were built. It survives in various forms to this day, including the three linked legs found on the flags of Sicily and the Isle of Man. 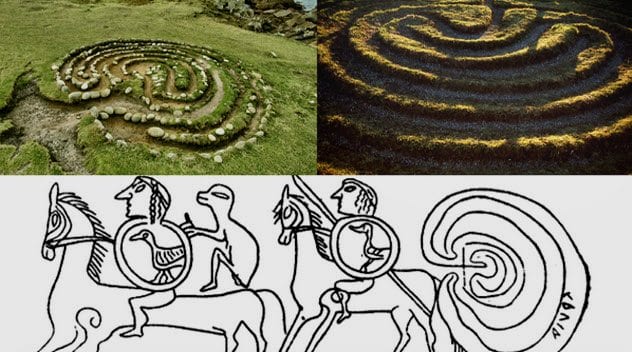 Troy towns are a type of labyrinth first recorded on an Etruscan wine pitcher from the seventh century BC, where it is labeled with the word “Truia.” (A sketch of the image is pictured above.) The pattern was popular throughout the ancient world, appearing on Greek coins and graffitied onto walls at Pompeii.

Somehow, it survived throughout the Middle Ages. Elizabethan Welsh shepherds cut the pattern into the earth, forming mazes called Caerdroia (“City of Troy”). In Scandinavia and the Baltic, the “Trojaburgs” were outlined from stones. The pattern was popular among Native Americans in Arizona by the 18th century, although they may have learned it from Europeans.

The purpose of the Troy towns is unclear, although they have been associated with folk magic and ceremonial dances. It is associated with the legend of the Minotaur and the mazelike walls of Troy. However, the Troy town is not a real maze but a single path that’s impossible to get lost in.

One suggestion is that the Troy town pattern remained popular simply because it looks complicated but is actually quite easy to create once you know the secret. It’s not clear how it survived so long or how it made its way to distant Scandinavia.