Jupiter is the oldest planet in our solar system. Despite centuries of observation, this beautiful world remains mysterious. However, the gas giant is slowly starting to give up its secrets, thanks to high-tech telescopes and probes like the Juno spacecraft.

The best finds from Jupiter are recent and otherworldly. This strange haul includes unique features, incredible new facts, and things scientists cannot even begin to explain. 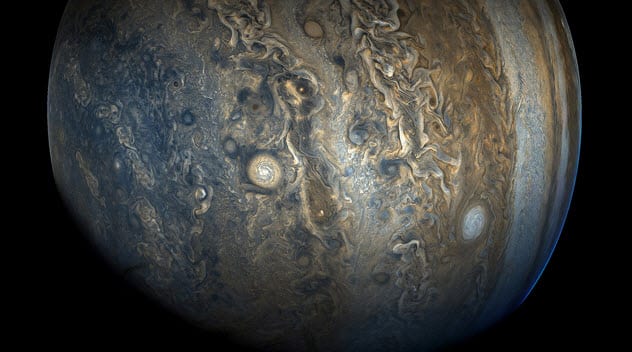 Jupiter may be a heavyweight today, but it had growth issues in the past. In 2018, a study found that the largest planet suffered a delayed growth spurt. The most accepted theory about the solar system’s beginnings starts with the Sun orbited by a dust-filled gas cloud. Eventually, pieces glommed together into lumps, which then formed larger bodies that grew into worlds.

Jupiter was the odd kid. At first, small clumps fattened the planet up for a million years. After ballooning to a stage where it could beat Earth’s mass 20 times over, Jupiter’s growth was arrested.

Suddenly, massive worlds smashed into the planet. Instead of mass, they injected energy. This created zones with so much heat and energy that gas molecules struggled to merge with Jupiter. The bombardment continued for another two million years and ground the planet’s growth down to a snail’s pace.

Even so, Jupiter grew to 50 times Earth’s mass. After that stage, the planet gorged on gas and quickly swelled to its current mass, which equals 300 Earths.[1] 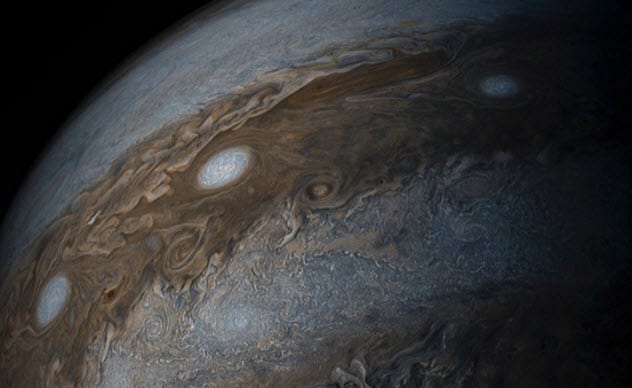 Jupiter is a beautifully patterned world. Immensely powerful winds influence the swirls and stripes. But for a long time, the depth of the bands remained unknown.

In 2018, NASA scientists solved this riddle in a novel way. They used the spacecraft called Juno, which orbited Jupiter every 53 days. As it cruised along, Juno’s signals showed how strongly Jupiter’s gravity pulled at the craft at the time of transmission. This way, researchers could create a 3-D image of the streams.

The greater the pull, the greater the mass of the region below. This gravitational map showed that the stripes ran surprisingly deep, plunging to a depth of 3,000 kilometers (1,800 mi). This discovery could also eventually refine Jupiter’s official mass and the depths at which the winds operate.[2]

As it is a gas world, the winds—moving at 360 kilometers per hour (223 mph)—shift that mass around and make calculations difficult. It may even help to one day unravel why Jupiter’s fluid interior behaves like a solid body underneath the flows. 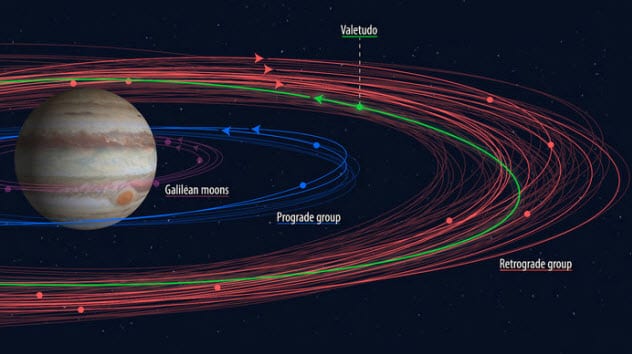 In 2017, astronomers searched for the theoretical Planet X. Something outside our solar system is tugging at objects within. As this could be the missing planet, scientists turned a powerful telescope in that direction. They did not find proof of a ninth planet, but the same patch of sky contained Jupiter.

At some point, somebody viewed the gas giant and noticed more moons. All told, the team found 10 new moons orbiting Jupiter. This brought the planet’s satellites up to a total of 79.

Not only does this give Jupiter the most moons in the solar system, but one of the new guys was highly unusual. Jupiter’s moons move in packs, and two of the new satellites spin with a group that rotates in the same direction as the gas giant. The rest showed up in a cluster that spins against the planet’s rotation. This is what astronomers refer to as “retrograde.”[3]

The weird new moon was inside this group but spinning with Jupiter. Called Valetudo, it could have a short lifetime. Being an anti-retrograde moon within a retrograde cluster, a future collision is inevitable. 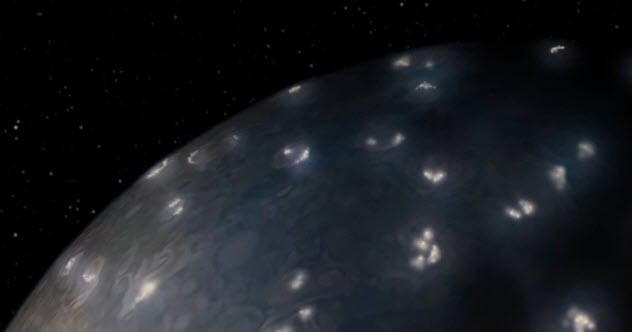 Stormy weather rules Jupiter’s atmosphere. Astronomers long assumed that there would be lightning, which was confirmed in 1979. The bolts turned out to be pretty strange. Lightning releases radio waves, and for decades, every probe that visited the planet recorded something unusual.

Lightning on the gas giant only signaled in the low-frequency range. No theory could explain why as Earth’s lightning emitted radio waves from low to very high frequencies.

In 2018, Juno solved the mystery. As it turns out, the problem was not with Jupiter but with human technology. Previous spacecraft could not match the sensitivity of Juno’s equipment or its close approach. Not only did it record megahertz strikes, but some even zinged around in the gigahertz range.

Intriguingly, the probe also confirmed that Jupiter’s lightning was unlike that of Earth. Lightning on Earth avoids the poles and prefers to zap the equator. The gas giant’s equatorial zone has no lightning. Instead, it lights up Jupiter’s poles with a peak frequency of four bolts per second.[4]

Juno Captures the “Roar” of Jupiter

When the Juno spacecraft approached Jupiter in 2018, one of its main duties was to do the closest flyby of the planet yet. Late in June, it breached the planet’s magnetic field and unexpectedly made an eerie discovery.

To the amazement of astronomers, Juno was listening to a chilling array of sounds. Roars and screeching suddenly filled the data being sent back to Earth. As bizarre as the space music was, there was an explanation.

Jupiter’s magnetic field shields the planet from solar winds. When Juno flew into it, the craft happened to record a related disturbance called “bow shock.” During this event, solar winds collided with the barrier, slowed down too fast, and heated up.[5]

Eventually, this compression resulted in a shock similar to the sonic booms that occur on Earth when pilots break the sound barrier. Remarkably, the bow shock recording lasted two hours, though the spacecraft zoomed toward Jupiter at 241,000 kilometers per hour (150,000 mph). This gave scientists an idea of how massive the phenomenon really was. 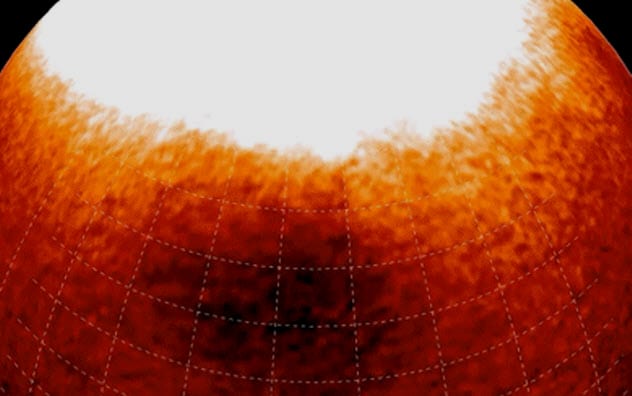 Jupiter’s most famous feature is the Great Red Spot. This giant storm is capable of engulfing Earth twice over. Interestingly, the planet has another dot—the Great Cold Spot. It was recently detected when scientists checked data from an observatory in Chile. To get more information, they riffled through the observations gathered by another telescope over a longer period of time.

Surprisingly, for the 15-year duration of the study, the equipment unwittingly recorded the new spot’s existence. However, this chilly customer is not a teenager. Researchers strongly suspect that Jupiter’s auroras spawn the patch, which is always around 200 degrees Celsius (400 °F) colder than the surrounding region.[6]

The auroras themselves are ancient, and this probably makes the spot thousands of years old. Unlike its red cousin, the newly discovered phenomenon is not stable. Records showed volatile shape-shifting and blooming to 24,000 by 12,000 kilometers (15,000 by 7,500 mi). Sometimes, it completely disappears. However, it always returns to the upper atmosphere, usually after an intense auroral display. 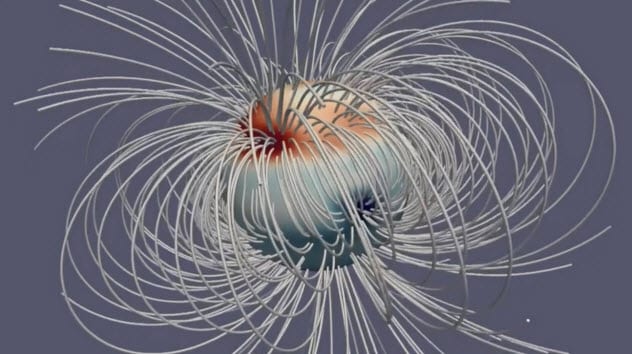 Jupiter has the strongest magnetic field of all the planets. Compared to Earth, it is 20,000 times more powerful. A scientific study published in 2018 revealed that this magnetosphere was a little wacky. In fact, it resembled no other planet’s field.

In the past, illustrations showed something similar to Earth—two poles, relatively near the geographical north and south, connected with magnetic lines. However, when NASA’s Juno investigated, it found things were not that tidy.[7]

The magnetic south pole was well-behaved. The north was a different story. Features included an intensely magnetic ribbon and chaotic pieces of field, some lacking positive or negative counterparts. To make things weirder, another “south pole” hung around the equator.

Researchers suspect that a hydrogen ocean, swirling deep within Jupiter, generates the planet’s field. The strangeness of the magnetosphere could one day explain with certainty what is happening inside Jupiter. The problem is that scientists do not understand the clue. First, they have to unravel the bizarre behavior of the poles to understand what is going at the planet’s core. 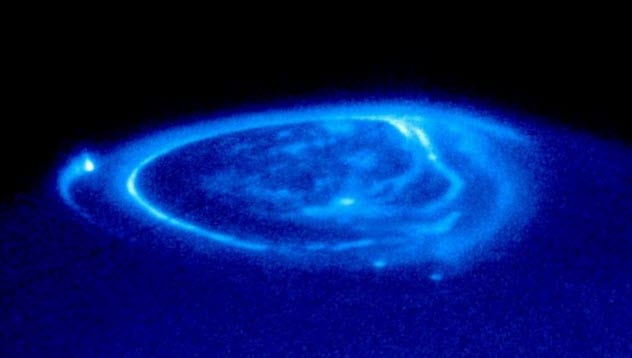 Four of Jupiter’s moons mark the planet in a mysterious way. When in close orbit, they influence something called plasma. Once disturbed, this layer of charged particles is believed to spawn the auroras at Jupiter’s poles. The light show can only be seen with ultraviolet and infrared equipment.

In 2017, NASA’s Juno spacecraft captured the closest view of Jupiter and took images of all the moons’ so-called auroral footprints. The results showed something unexpected.

Previously, the patterns were considered simple and random, but the swirls turned out to be complex and unique to each moon. In particular, Io’s contribution was surprising. Scientists predicted a plain, big spot. What they got was a footprint with a tail that spawned its own vortices.

Ganymede, the only moon with its own magnetosphere, also triggered something unique—twin footprints. The double auroras are probably the offspring of the moon’s magnetic field inside Jupiter’s, but scientists cannot begin to explain Io’s strangely patterned auroras.[8] 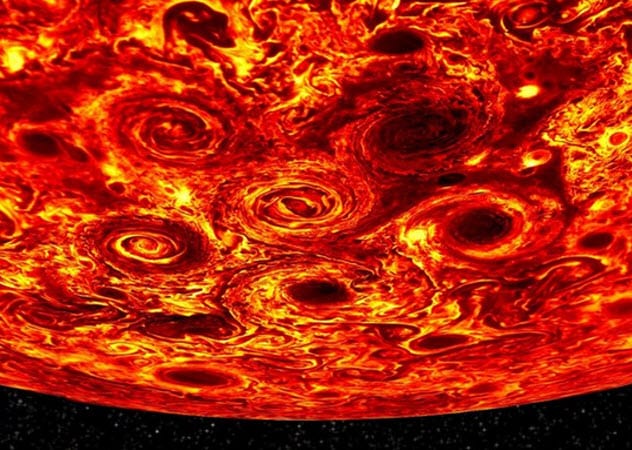 Saturn has two cyclones, one at each pole. As Saturn is also a gas giant and the second biggest planet, researchers predicted the same for Jupiter. Instead of finding single storms, however, they saw something that exists on no other planet.

In 2018, Juno took images of Jupiter’s poles after discovering cyclones there. Immensely large, the storms behaved in a bizarre manner. They clustered together in geometric shapes, including a pentagon at the south pole.

The cyclones were close enough to touch, yet they remained individually stable. Science cannot explain how they swirled together for seven months and never merged. The geometric formations also remain unexplained.[9]

1 It Does Not Orbit The Sun 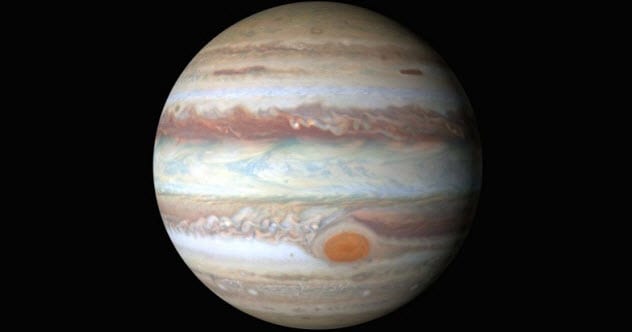 Most people are familiar with the diagram showing the solar system. Visible circles indicate the planets’ orbital paths around the Sun. Reality is a little different. Planets orbit a center of gravity, and since the star is simply just so massive, this point is usually deep within the Sun.[10]

However, Jupiter is such a behemoth itself that it has no ties with this solar point. Just to give an idea of the size of this planet, Jupiter’s mass is 2.5 times that of all the other planets combined. The gravity center between the Sun and Jupiter is not within the star but above it. Interestingly, both the planet and the Sun orbit this center.

As the Sun remains the biggest thing in the solar system and is very close to this gravitational point, it almost appears to have no effect on the star. On the other hand, Jupiter is a dwarf compared to the Sun and is also some distance away, which placed it in a noticeable orbit.