At just 313 square kilometers (121 mi2), Malta is one of the world’s smallest and most densely populated countries. This Mediterranean island is also home to the world’s oldest freestanding structures and enduring mysteries.

Inhabited for over 7,000 years, Malta has been settled by Phoenicians, Greeks, Romans, Byzantines, the Muslim Emirate of Sicily, and Crusaders under the Holy Roman Empire. The history of mysterious Malta is the history of the entire Mediterranean—and beyond. 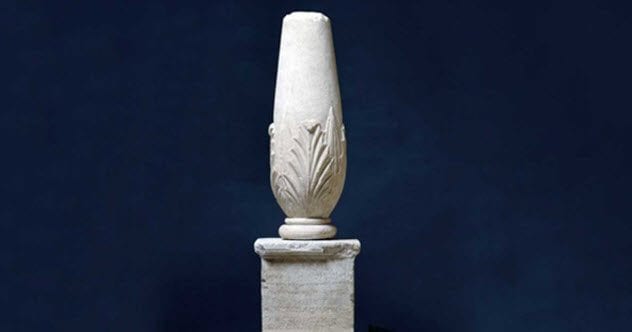 In 1694, the Knights of St. John discovered two ornamental pillars known as the Cippi of Melqart in the village of Marsaxlokk. The pillars contained engravings that allowed linguists to unlock the ancient and mysterious Phoenician language.

The cippi honored Melqart, the Phoenician god of life and death. Around 500 BC, the Greeks began to associate Melqart with their own Hercules. The Greeks and Phoenicians joined forces to build a Maltese temple honoring Hercules/Melqart at the Tas-Silg site where the Cippi of Melqart were discovered.

The Cippi of Melqart were carved into white marble and stand 1 meter (3.5 ft) high. Like most ornamental pillars, these contain inscriptions: three lines of Greek text and four lines of Phoenician. The cippi’s hidden message, an ode to Melqart, was finally translated by a French archaeologist in 1758. The Cippi of Melqart were undoubtedly the key to unlocking the Phoenician language.

9 Temple Of The Giants 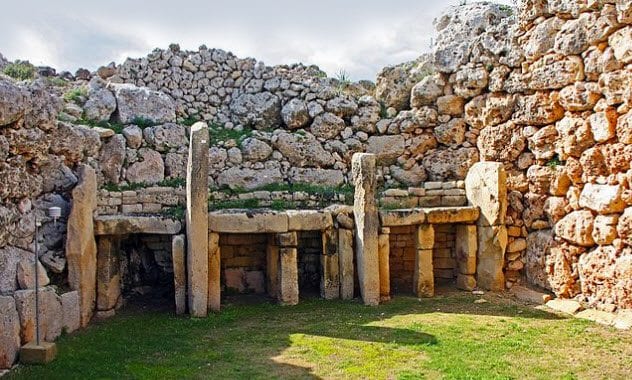 Malta’s megaliths are older than Stonehenge and the Egyptian pyramids. These supersized temples date to between 5500 and 2500 BC. The date of the structures was surmised through radiocarbon dating of human remains and pottery found in the vicinity. Located on the island of Gozo, Ggantija is the oldest freestanding structure anywhere in the world. According to legend, giants built the massive structure.

First excavated in 1827, the Ggantija temples sit on the Xaghra plateau facing southeast. Massive limestone blocks compose the exterior. Slabs reaching 8 meters (26 ft) covered this edifice. The interior walls are made of rough limestone chunks. It is likely that these jagged walls were once smoothed over with clay and a thin coat of lime plaster. 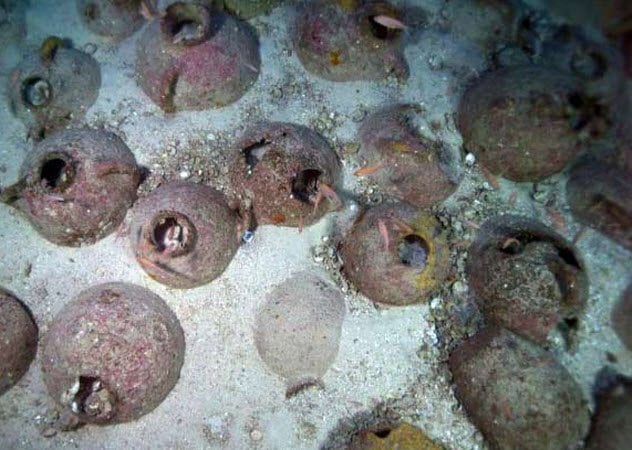 Off the coast of Malta, archaeologists discovered a 2,700-year-old Phoenician shipwreck. Not only is this the oldest shipwreck in the central Mediterranean, but its cargo hold is nearly intact.

Divers spotted the wreck in 120 meters (390 ft) of water about 1.6 kilometers (1 mi) off the coast of Gozo. Based on the ship’s cargo, experts believe that the ship was en route to Sicily when it sank. Researchers are not revealing the exact location of the site.

So far, more than 50 amphorae and nearly two dozen 35-kilogram (77 lb) grinding stones have been recovered. There are seven types of amphorae, suggesting that the ship had traveled to several ports before its ill-fated final voyage.

The Phoenicians’ homeland was in modern-day Lebanon. However, their trading empire stretched across the Mediterranean. The key to their success was mastery of the sea. Precious little is known about these mysterious ancient merchants. 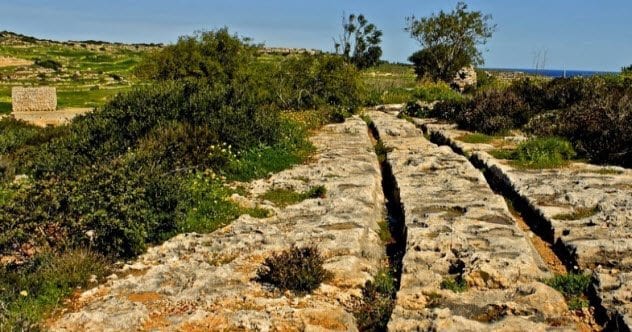 Malta is home to mysterious “cart ruts.” These networks of enigmatic parallel tracks cut across the island’s limestone and appear to be man-made. No one knows how the ruts got there. Some run off sheer rock faces. Others appear underwater. A common theory is that they were a system for catching water.

Most of the cart ruts date to the Bronze Age around 200 BC when Sicilian settlers came to Malta. One theory proposes that the ruts began when early inhabitants moved massive objects via carts and sleds. These modes of transport would cut through the topsoil, leaving furrows that grew deeper through the years.

It is unlikely that the ruts were used to irrigate. Parallel channels would serve no function in that regard. Cart ruts near Dingli Cliffs support the load-bearing sled theory because many lead directly to a rock quarry. 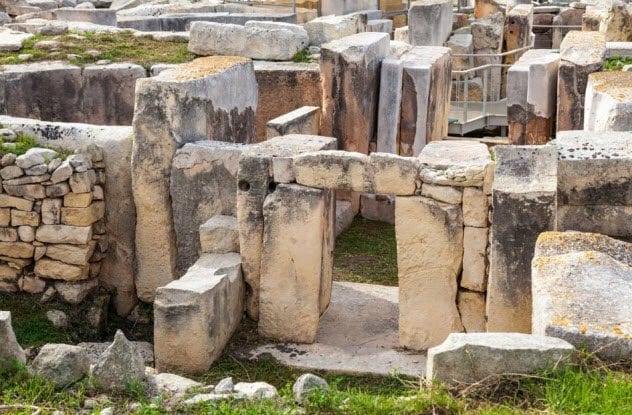 For a little over a millennium, Malta’s Temple people covered their small island with over 30 stone temple complexes. This culture developed in complete isolation. The more it advanced, the more extreme it became, seeming to ignore all influence from the outside world.

The temple complexes contain ritual and burial sites along with hundreds of statues. How this advanced culture developed is an enigma; so is its sudden disappearance.

The Temple people were not wiped out by invasion, disease, or famine. Yet around 2900 BC, they vanished. We are left without written documents to reconstruct their past.

Isotope analysis of human remains revealed that they consumed mostly meat and vegetables. Strangely for an island people, they had very little seafood in their diet. Some theorize that rapid climate change ended the era of the Temple people. But more research is required to prove this. 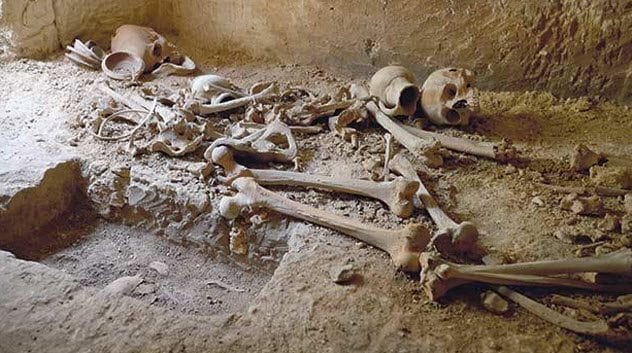 While extending the fields of St. Paul Missionary College, workers discovered ancient catacombs. They contained the remains of at least eight individuals, including a baby. The immaculate remains were completely undisturbed by grave robbers. The chambers were hand-chiseled from stone. For infants, there were burial shelves, which were miniature tombs that had been plastered shut.

The identity of the dead remains a mystery. Calling them “Maltese” would be wrong as this identity is a modern one. The catacombs date back 2,000 years to the Roman Empire.

However, the location and contents of the tombs suggest that the region was transitioning from a Carthaginian colony to a Roman province. A large Jewish population—as well as various other merchants and colonists—also existed on Malta two millennia ago. 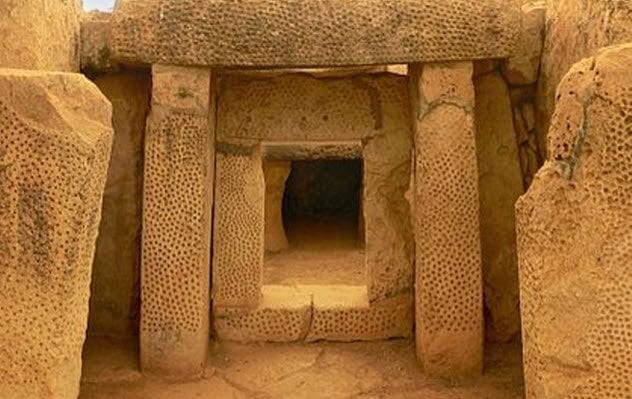 Mnajdra temple complex is located on Malta’s isolated and rugged southern coast. The site dates back to 3600 BC. The most striking element of the temple complex is the attention that its builders paid to astronomy.

Builders sought to harmonize the location with celestial activity. The entrance to the south temple is decorated with large stone blocks containing hundreds of drilled depressions. The doorway and the decorated blocks mark the equinoxes and the solstices.

In 2000, vandals toppled roughly 60 megaliths from the Mnajdra temple complex. Most suspect migratory bird hunters who use ancient stones to build huts. Vandals cut through the fence that secures the site.

In 2009, experts decided to cover the site with Teflon-coated tents. The covering protects the ancient site from the harsh weather and salt air, which steadily degrade the rock construction.

3 Temple Of The Unknown Fertility Cult 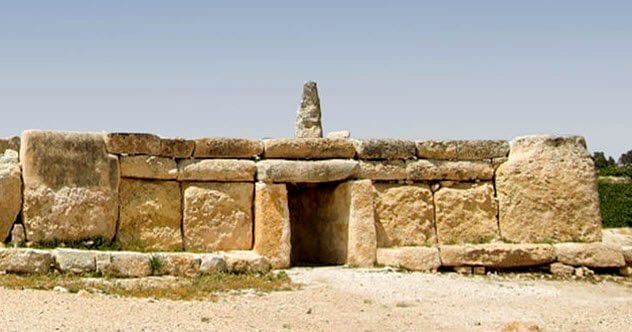 The Neolithic temple complex of Hagar Qim hints at a mysterious Maltese fertility cult. First excavated in 1839, the complex contains a central structure and two outlying buildings. A series of C-shaped rooms, known as apses, give the site structure.

During the summer solstice, the rising Sun’s rays penetrate the sanctuary through an elliptical hole cut from one particular apse and illuminate the lower stones. Combined with the array of fertility statues discovered here, archaeologists theorize that Hagar Qim was a location of ancient reproductive rites.

The ancient fertility temple was active between 3600 and 3200 BC. Several clay and stone statues of androgynous obese figures and fat ladies have been recovered from Hagar Qim. Two stone altars hint at ancient rites once performed here. The limestone construction has stood for millennia. However, modern environmental conditions are beginning to rapidly erode the structure, which is now protected under tents. 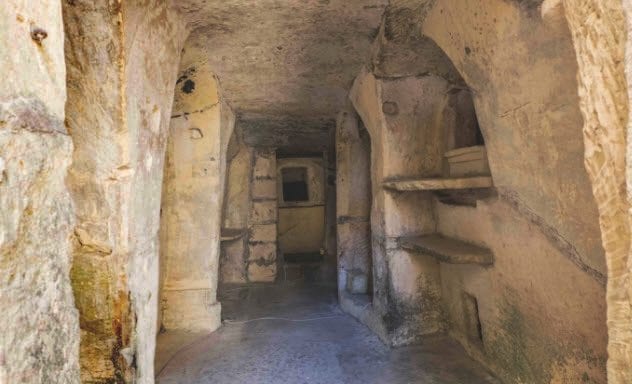 The Ta’ Bistra catacombs reflect a comingling of Christianity, Judaism, and paganism. Fist excavated in 1891, the burial chambers have long since been looted. The Knights of St. John were in the habit of granting treasure hunting licenses.

Located in Mosta, these catacombs date back 1,700 years. The style was adapted from earlier Maltese rock-cut tombs of the Phoenician and Hellenistic periods. The complex consists of 16 chambers cut into the vertical face of the ridge near St. Paul’s Bay.

The hypogea (chambers) are decorated with scallop shells, spirals, arched shelves, and tables. The site is 90 meters (295 ft) long and contains 57 tombs, which are believed to be part of a much larger catacomb system.

After the site was initially excavated, a farmhouse was built over a large portion of the site. Experts believe that the house has probably caused significant damage to the location. 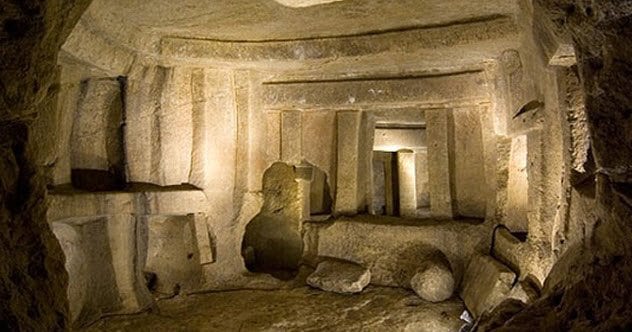 Malta’s Hypogeum of Hal Saflieni is believed to be the oldest underground temple in the world. Dating back 5,000 years, this subterranean sanctuary is notable for its unique acoustics.

Many equate being in the hypogeum with standing under a giant bell. Specific pitches resonate in flesh and bone as much as the ear. With sounds coming from unknown sources, the underground temple transfixes an audience.

Maltese composer Ruben Zahra and an Italian team discovered that sounds within the hypogeum reverberate at 110 Hz. This pitch sensitivity has also been detected at other ancient sites like Ireland’s New Grange.

A 2008 UCLA study revealed that pitches at 110 Hz shift brain activity in the prefrontal cortex. The result is a decrease in linguistic activity and an increase in emotional processing. It is unknown whether the room’s dimensions or its construction have more of an impact on the sound generated. Many mysteries about the hypogeum remain.