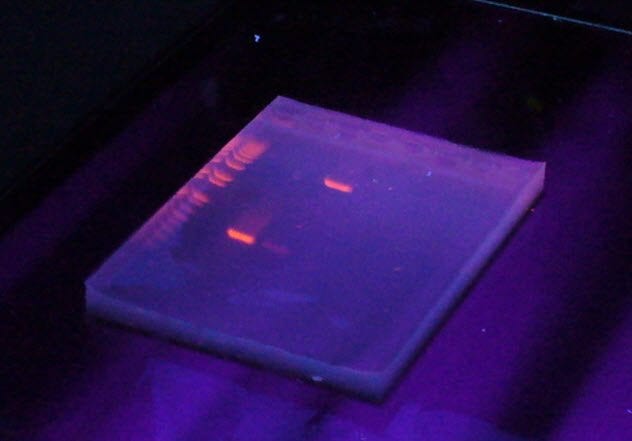 To be a biologist today, you have to learn the tricks of working with DNA. The problem is that DNA is stubbornly invisible at the concentrations in which most people use it. If you want to isolate fragments of DNA, you have to dye it.

Ethidium bromide is an ideal dye for DNA. It fluoresces beautifully and binds tightly to DNA. What more could you want? How about a compound that does not cause cancer?

Ethidium bromide dyes DNA by slotting between the base pairs. This causes breaks in the DNA as the presence of ethidium bromide causes strains in the structure. These breaks become sites for mutation.

Mutations tend to be undesirable. You also have to use UV light, another cancer-causing agent, to visualize the dye, which does not make ethidium bromide any safer. Now many researchers who work with DNA prefer to use safer compounds to stain DNA. 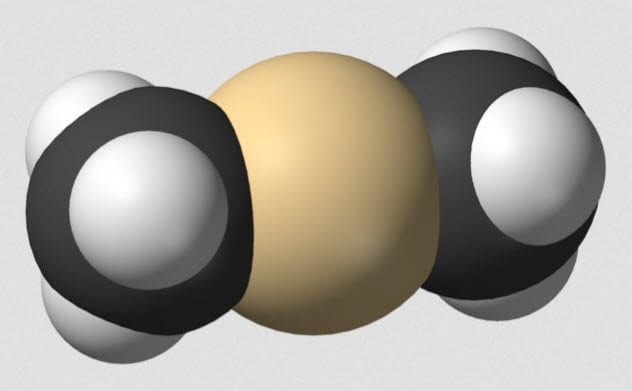 Lead, mercury, and all their elemental friends cause a variety of health problems when introduced into the human body. In some forms, the heavy metals can pass through the body without being absorbed. In others, they are readily taken up. Once inside, the troubles begin.

Dimethylcadmium causes severe skin burns and eye damage. It is also an environmental poison which builds up in tissues. If the physiological effects were not already bad enough, the chemical is flammable in liquid and gaseous forms. Exposure to air is enough to ignite it, and water makes it generate more flammable compounds. 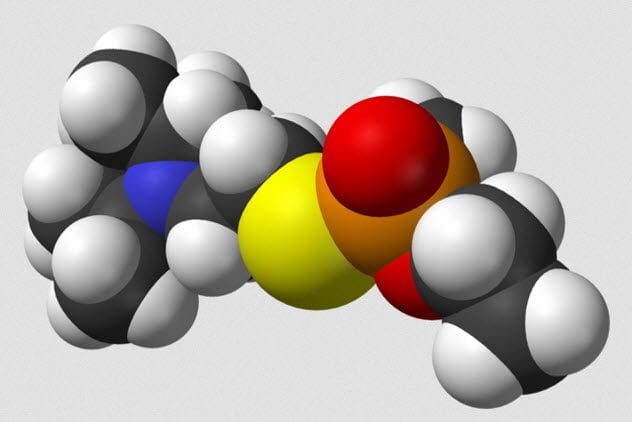 VX, the common name for Venomous Agent X, is a chemical that has no uses outside of chemical weaponry. Developed by the British at the weapon research station at Porton Down, the chemical is an odorless, tasteless compound that is deadly in amounts as small as 10 milligrams. The British government traded knowledge of VX with the US for information on making thermonuclear weapons.

VX is easily taken up by skin exposure. It does not readily break down in the environment, so an attack with VX could lead to long-term exposure risks. Clothes worn during exposure could be enough to cause toxicity in those who come into contact with them. Exposure to VX kills by constantly activating glands and muscles. Death comes when the respiratory system fails.

Sulfur trioxide is a precursor to sulfuric acid and is required for some sulfonation reactions. If sulfur trioxide was not useful, then no sane scientist would keep it around. As can be seen in the video above, sulphur trioxide is caustic in the extreme when it comes into contact with organic matter.

When sulfur trioxide reacts with water (which makes up most of the human body), it creates sulfuric acid and heat. Even if sulfur trioxide does not hit your flesh, just being near the reaction is dangerous. Sulfuric acid fumes do bad things to the lungs. Spilling sulfur trioxide on organic material like paper or wood creates a toxic fire. 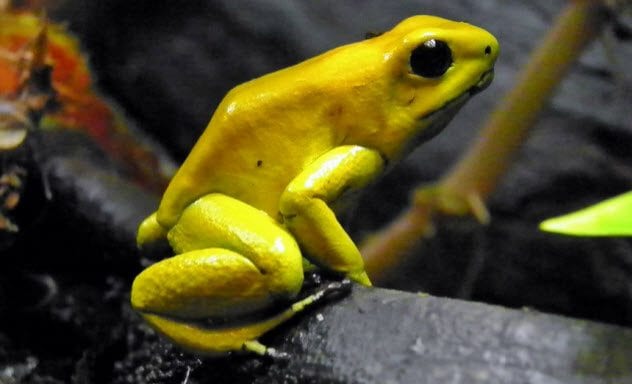 Batrachotoxin is a complex-looking molecule which is so lethal that 136 millionths of a gram would be deadly to a 68-kilogram (150 lb) human. To put this in perspective, that is about two grains of salt. This puts batrachotoxin among the most toxic of all chemicals.

Batrachotoxin binds to the sodium channels in nerve cells. The role of these channels is vital in muscle and nerve functions. By forcing these channels open, this chemical removes all muscle control from the organism.

Batrachotoxin is found in the skin of tiny poison arrow frogs. Some Native American tribes hunt by dipping their darts in the poison secreted by the frogs. Hitting their prey with these darts incapacitates the prey and lets the hunters gather up their prey at their leisure. 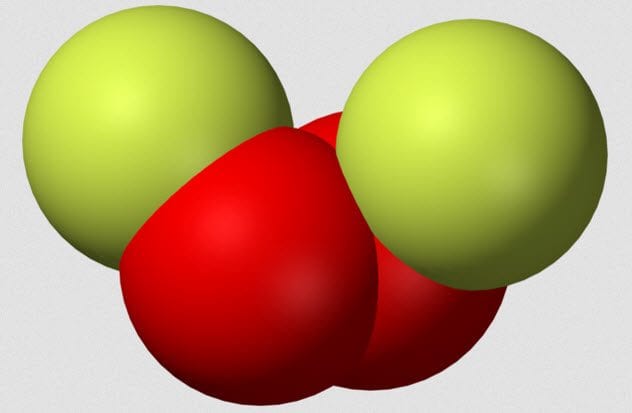 Dioxygen difluoride is a terrifying chemical which also goes by the charming nickname FOOF because it is two fluorine atoms joined by two oxygen atoms. In 1962, chemist A.G. Streng published a paper called “The Chemical Properties of Dioxygen Difluoride.” Although the title may not be thrilling, Streng’s experiments certainly were.

FOOF must be made at a very low temperature as it breaks down when it boils at around -57 degrees Celsius (-71 °F). During his experiments, Streng found that FOOF reacted explosively with organic compounds, even at -183 degrees Celsius (-297 °F). With chlorine, FOOF caused a violent explosion, and contact with platinum caused a similar effect.

In fact, the results section of Streng’s paper is filled with the words “flash,” “spark,” “explosion,” “violent,” and “flame” in various combinations. Remember, all this is taking place at temperatures in which most chemicals sit happily inert. 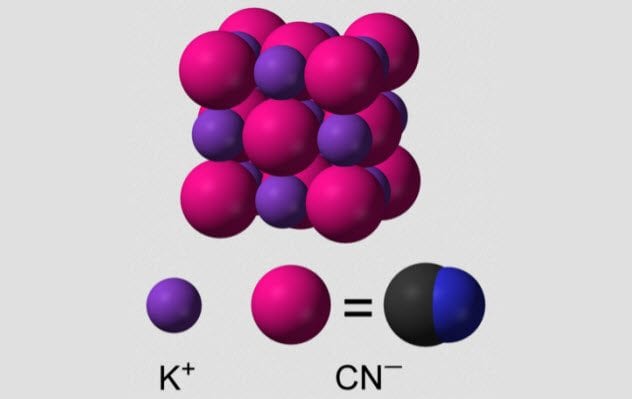 Cyanide is a simple molecule—just a carbon atom triple bonded to a nitrogen atom. Being small, cyanide can slip into many places in proteins, and almost none of them turn out well for us. Cyanide particularly likes to bond with the iron atoms at the center of hemeproteins.

One hemeprotein is very useful to us: hemoglobin, the protein that carries the oxygen in our blood. Cyanide knocks out hemoglobin’s ability to transport oxygen.

When potassium cyanide comes into contact with water, it breaks down to hydrogen cyanide, which is easily absorbed by the body. This gas smells like bitter almonds, although not everyone is able to smell it. 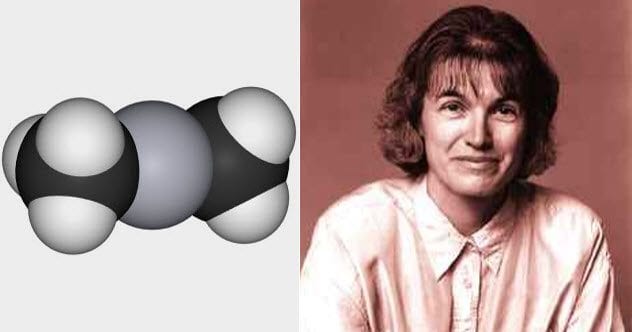 In 1996, Karen Wetterhahn was studying the effects of heavy metals in organisms. Heavy metals in their metallic form are quite hard for living things to take up. Although it is not recommended, you could dip your hand in liquid mercury with few ill effects.

So to introduce mercury to DNA, Wetterhahn used dimethylmercury, a mercury atom with two organic groups attached. During her work, Wetterhahn spilled one drop, possibly two, on her latex glove. Within six months, she was dead.

Wetterhahn was an experienced professor who had taken all the recommended precautions. But the dimethylmercury seeped through her gloves in fewer than five seconds and through her skin in 15 seconds. The chemical left no obvious marks, and Wetterhahn only noticed side effects months later when it was already too late to treat.

A colleague who saw Wetterhahn on her deathbed described the scene: “She was thrashing about. Her husband saw tears rolling down her face. I asked if she was in pain. The doctors said it didn’t appear that her brain could even register pain.” 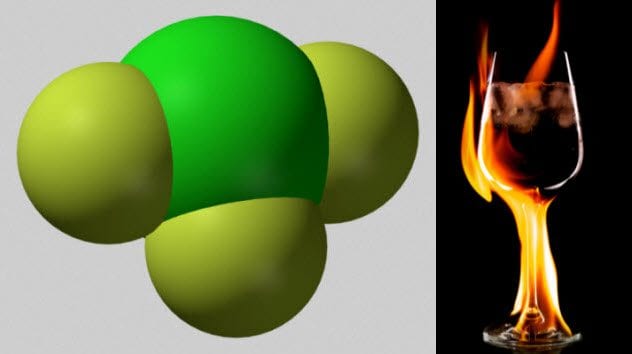 Chlorine and fluorine individually are nasty elements. It turns out that combining them into chlorine trifluoride makes them much worse.

Chlorine trifluoride is a chemical so corrosive that it cannot be stored in glass. It is such a strong oxidizing agent that it will burn things that will not ignite with oxygen.

Even the ashes of things already burned in oxygen will catch fire when exposed to chorine trifluoride. It does not even need a source of ignition. When 900 kilograms (2,000 lb) of chlorine trifluoride were spilled in an industrial accident, the chemical dissolved 0.3 meters (1 ft) of concrete and 1 meter (3 ft) of gravel beneath that.

The only (relatively) safe way to store this chemical is in a metal container which has already been treated with fluorine. This creates a fluoride barrier with which the chlorine trifluoride cannot react.

Everyone who works in chemistry hears the horror stories about hydrofluoric acid. In the technical sense, hydrofluoric acid is a weak acid that does not give up its hydrogen ion readily. As a result, it will not give you a chemical burn rapidly.

This makes hydrofluoric acid that much more insidious. Being relatively neutral, it will pass through the skin without your immediate notice and enter the body. Once there, the hydrofluoric acid will get to work.

When the acid does give up its proton, it leaves the fluorine to react with other chemicals. These reactions are generally transient, so the fluorine swoops in, causes damage, and is then released to wreak more havoc.

One of fluorine’s favorite targets is calcium. Therefore, hydrofluoric acid causes bone death. It also removes the calcium necessary for cardiac function. When a victim is left untreated, death is likely to be brutal and long.