They once housed our brains and were closely associated with our sensory organs. They’re skulls. And when empty of life they’re eerie artifacts of lives now lost. The things made from them strike us as weird, especially when there is no clear connection between the skulls and the objects created from them. 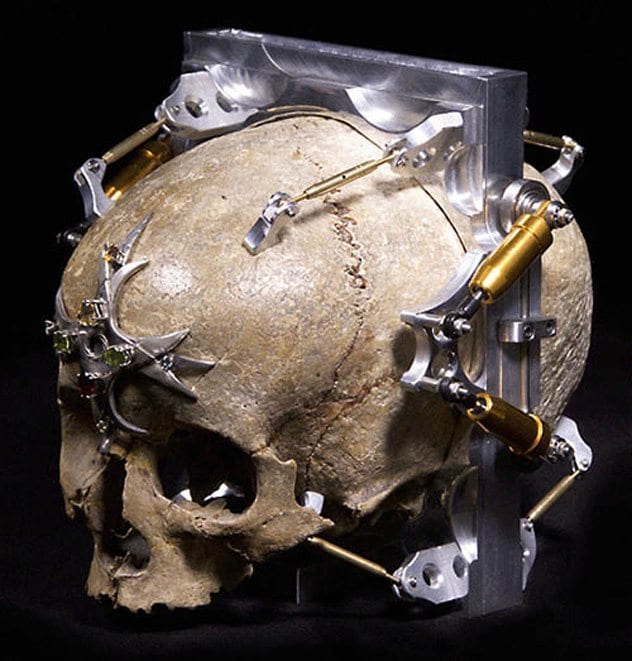 Wayne Martin Belger’s Third-Eye Camera is made of the 150-year-old skull of a 13-year-old murdered Texas girl. To make his camera, Belger “drilled a pinhole into her forehead, and surrounded the opening with jewels in green, amber and maroon,” before cutting “the skull in half, near where the ears would be,” and slipping “the 4-by-5-inch film into this slot.”

The camera complete, Belger used it to photograph several landscapes, some of which look as bizarre as his camera. 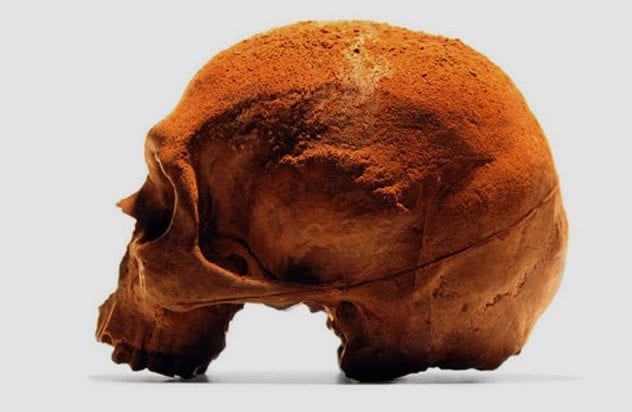 An online confectioner offers “life-size skulls” made entirely of “Belgian chocolate.” The sweet treats are “anatomically correct” in every detail, because they’re made from a “mold cast from a human skull.”

The candy skulls, which remain edible for six months, are also available in “dark, milk, chili and caramel chocolates.” Cast by hand, they’re “finished with a dusting of fine chocolate powder.” 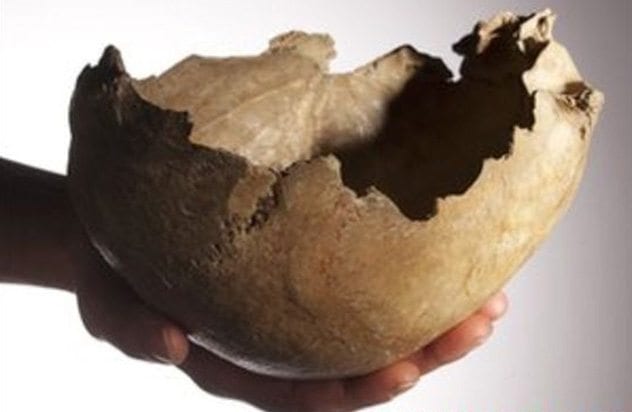 They’re not the only skulls that have been used as chalices. Others were used for this purpose “in more recent times,” paleontologist Sylvia Bello said, “in Tibetan culture, in Fiji in Oceania, and in India.” Although the drinkers’ beverage of choice is uncertain, Stringer said other ritual skulls suggest the libations may have been “blood, wine, and food.” 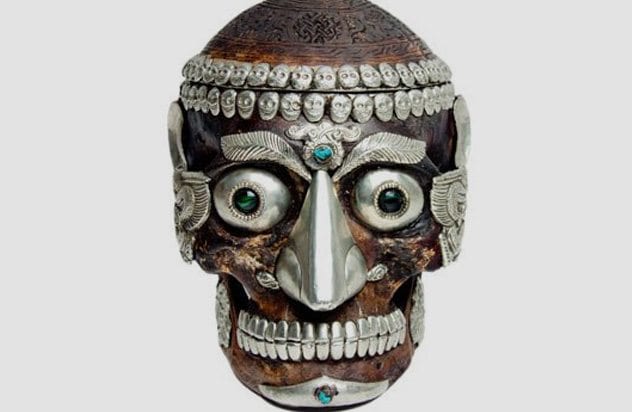 In Sanskrit, kapala means human “skull,” “bowl,” “vessel,” and “begging bowl,” indicating the range of the object’s functions and the activities in which it was used. The skulls are of two types. One is a complete skull. The other, the skull cap, comprises the top half of the cranium.

In monasteries, kapalas held dough cakes or wine, symbolizing “flesh and blood offerings to wrathful deities of Hindu India and Buddhist Tibet.” However, if a ritual required the use of other “substances,” the kapalas might hold “divine nectar . . . Vital nectar (semen), alcohol, ritual cakes . . . Fresh blood, marrow, intestines, fat,” or “the brains, heart and lungs of demonic enemies.” Those who drank from the kapalas believed they thus acquired “the knowledge and personality” of “the person to whom the skull belonged.” The skulls of prepubescent children and the offspring of incestuous unions were considered to have special potency. 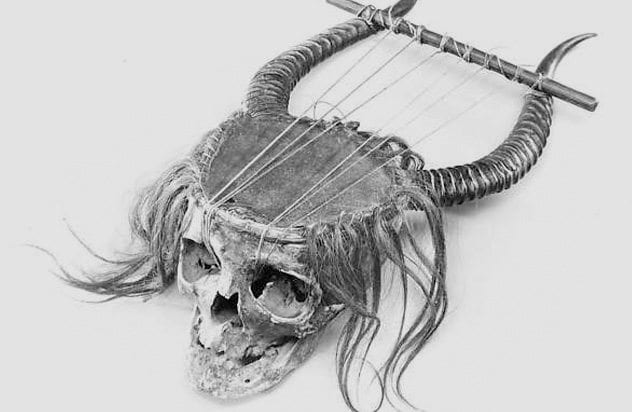 In one of the more bizarre uses of a human skull, the top of the cranium was removed and the rest of the skull covered with skin to yield a flat surface. Strands of hair were sewn to the edges of the skin, a pair of antelope horns were attached to the back of the skull, and a wooden stick was mounted atop the horns, near their ends. Antelope gut, tied to the stick and pulled through the eye sockets, formed the instrument’s strings.

The grisly lyre, representing Central African culture, “was purchased at the end of the 19th century.” Initially, it was believed to have been of South American origin. The purpose of the unusual artifact is uncertain, but it may be the creation of an “indigenous entrepreneur,” designed “for trade” with 19th-century Europeans. Today, the skull lyre is part of New York’s Metropolitan Museum of Art’s collection of musical instruments. 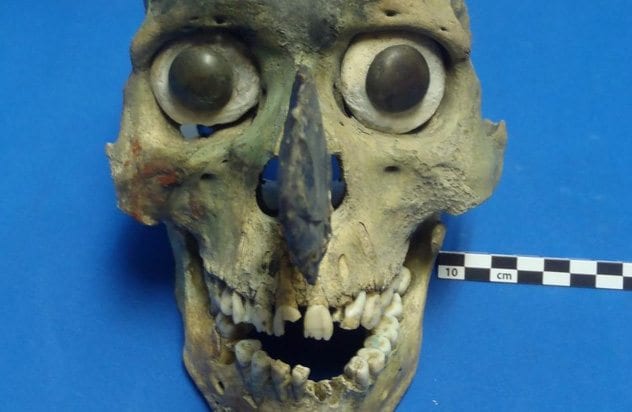 An Aztec temple in Tenochtitlan, Mexico, contains “eight masks made from human skulls.” Although the purpose of the masks is uncertain, archaeologists and anthropologists believe they were made from the skulls of “slain warriors and other elite members of ancient Aztec society.” The skulls may have been obtained through human sacrifice, one of the means of which was beheading.

The masks, worn by the social elite, were decorative headpieces. In one case, an Aztec-style knife was put in the nose, and pyrite eyes were installed in the sockets. 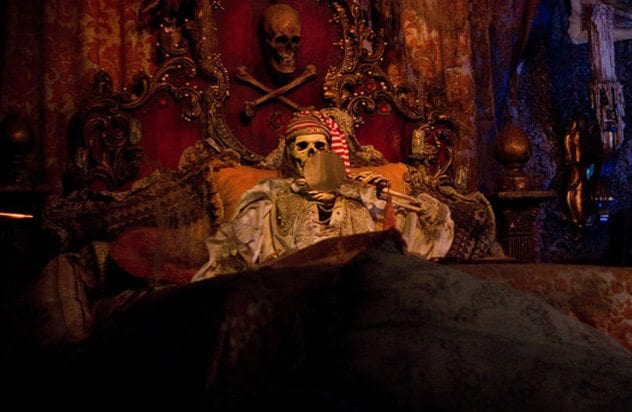 Rumor says Disneyland’s Pirates of the Caribbean attraction featured actual skeletons among its exhibits. Although Walt Disney was pleased with the attraction, his Imagineers, reportedly, were not. Finding the faux skeletons unrealistic, they persuaded friends at UCLA Medical Center to give them “some grisly props from the anatomy department,” Jason Surrell reveals in his book Pirates of the Caribbean: From the Magic Kingdom to the Movies.

The real skeletons were replaced, Surrell writes, once the Imagineeers’ art progressed to the point that they could substitute their creations for the real deal. The actual skeletons were then “returned to their countries of origin and received a proper burial.” The author’s assurances notwithstanding, rumors persist that a few of the actual skeletons remain on location. 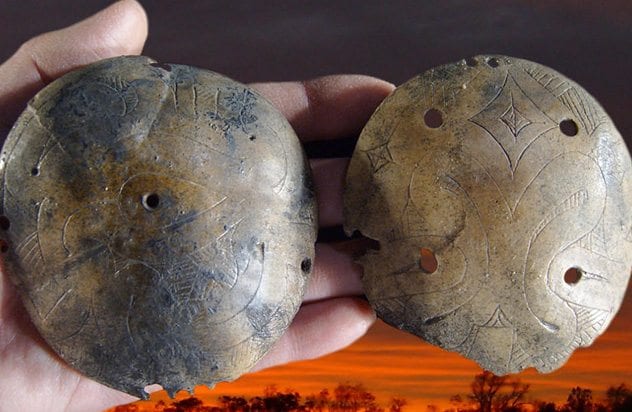 Among the more bizarre items in the Tennessee Department of Conservation’s collection are rattles made of human skulls. The rattles were discovered at the Pinson Mound mortuary complex in Madison County, the engraved pair lying next to the knees of an adult male. The rattles were filled with “small yellow quartzite river pebbles,” and holes were drilled through their edges so they could be tied together. Shaken, the pebbles collided with one another, making the rattles’ distinctive sounds.

Stringed ovoid shell beads, found with the rattles, may have been attached to them. One of the engraved rattles bears maze-like stylized motifs against crosshatched lines that may represent the weave of a basket. The oval space in the center of the motifs could represent a bird’s eye. The other engraved rattle bears a similar basket-weave background interspersed with three diamonds, inside which are other, smaller diamonds, perhaps meant to suggest the four winds. 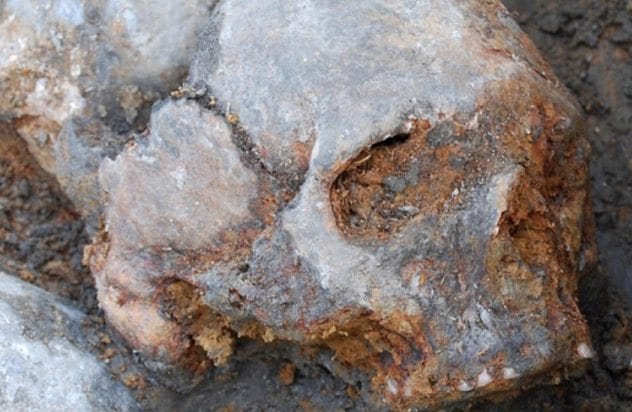 Eleven 8,000-year-old skulls and skull fragments of adults and children, including infants, were discovered in a Stone Age settlement near Motala, Sweden. Two—one whole, the other broken in half—were pierced and mounted on stakes. The find is unique because it represents the only known instance of such a practice during this prehistoric period. One view of the mounted skulls suggests they “could have been used for secondary burial rites, in which individuals’ bones were removed from their graves and reinterred after their bodies decomposed.” Another conjecture contends “the skulls belonged to enemies killed in combat, not departed loved ones whose mourners gave them two funerals,” and were mounted and displayed on the stakes so they could be “carried home as war trophies.”

To date, neither hypothesis has been ruled out, but a chemical analysis of the skulls may confirm one or the other. Fredrik Hallgren, who headed the archaeological team that discovered the skulls, said, “Sulphur and strontium isotopes in the bones” should indicate “whether the skulls belong to locals or come from a distant place.” 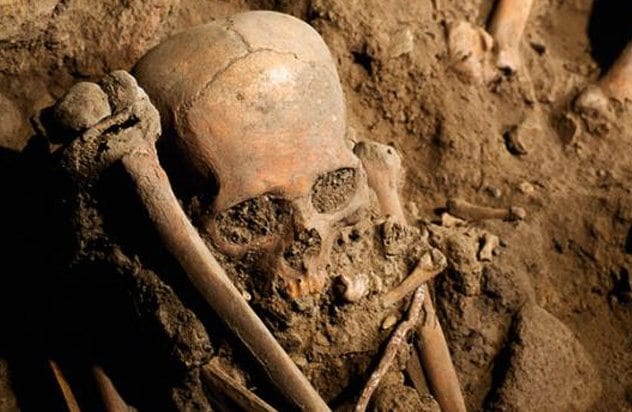 Five thousand skulls, bones, and bone fragments found in the ancient city of Teotihuacan near present-day Mexico City indicate the Teotihuacanos transformed the bones and skulls of their dead relatives into various tools and household items, such as “buttons, combs, needles, spatulas, and dozens of other everyday utensils.” The bodies of the dead had to be of adults “in their prime,” and they had to be relatively “fresh,” said Abigail Meza Penaloza, of the National Autonomous University of Mexico, who led the archaeological expedition.

Penaloza is confident the skulls and other bones are those of locals. The bone of the frontal sinuses, she said, is “so distinctive and unique that it works like a fingerprint,” and it matches the same bones in all the skeletons found at the site. Therefore, the bones are not those of sacrificed foreigners. Moreover, the bones “show only marks left by the defleshing process and no signs of ritual sacrifice.”

Gary Pullman lives south of Area 51, which, according to his family and friends, explains a lot. His 2016 urban fantasy novel, A Whole World Full of Hurt, was published by The Wild Rose Press. An instructor at the University of Nevada, Las Vegas, he writes several blogs, one of which is Chillers and Thrillers: A Blog on the Theory and Practice of Writing Horror Fiction