For most, the Christmas season is a time of joy, presents, and family. However, in Europe, there are certain Yuletide traditions that hint at a darker past. Even more than Halloween, the time around Christmas has traditionally been associated with folkloric creatures of terrifying darkness. 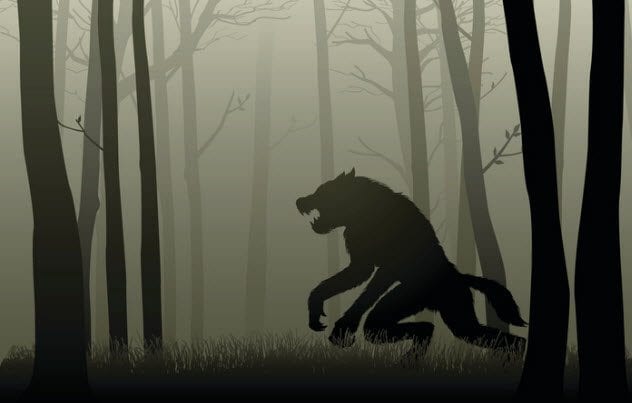 According to the traditions of Central and Southern Europe, children born on Christmas Day are likely to become werewolves. Why? Because being born on the same day as Jesus Christ is seen as a blasphemous affront. In the 20th century, The Werewolf of Paris author Guy Endore revitalized this tradition by having his werewolf, Bertrand Caillet, be born on Christmas Day following the rape of his mother.

Some have argued that the folk Catholic belief in Yuletide werewolves is a remnant of the Roman festival of Lupercalia, a winter celebration intended to honor the she-wolf who raised Romulus and Remus. The fear of werewolves was once so strong that even uttering the word “wolf” was believed to bring bad luck upon the entire village. 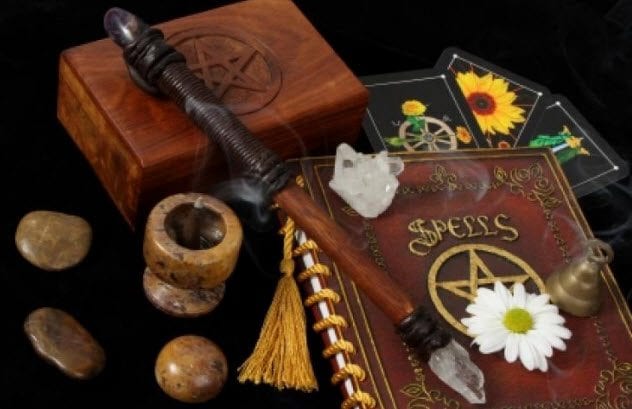 For today’s practicing Wiccans, Yule and the Winter Solstice are some of the most sacred holidays. According to the neo-pagan version of history, Christmas is but a highly sanitized version of Yule, a pagan celebration mostly held by the Germanic and Celtic peoples, and the Roman festival of Saturnalia. Taken together, many Wiccans and others believe that Christmastime is especially good for casting spells.

While it is undoubtedly true that many elements of modern Christmas are lifted directly from the pagan traditions of ancient Europe, much of the idea of Yule witchcraft actually comes from folk Catholic beliefs, primarily the idea that the 12 days between Christmas and Epiphany are a time when the spirit world impinges on our own. 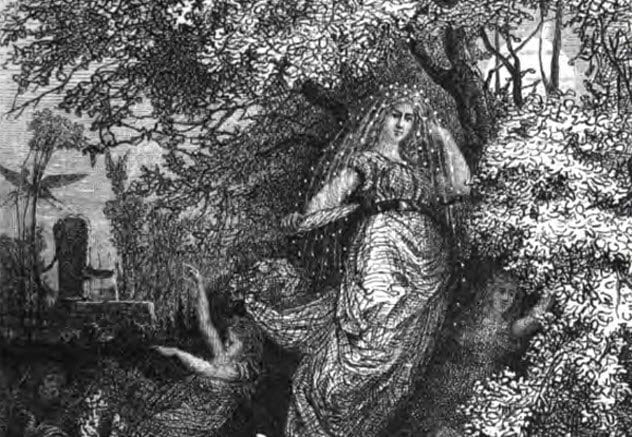 Also known as Holle and Frau Holda, Holda is a Germanic goddess that can be found in the folklore of Scandinavia, northern Germany, and the Alpine regions of Bavaria, Austria, Switzerland, and South Tyrol. According to legend, Holda spends the nights between Christmas and Epiphany traveling via a wagon or on horseback as the leader of a ghostly hunting party.

Her spiritual coterie are believed to be the souls of unbaptized infants and those not yet ready to enter Heaven. Holda, as one of the chief figures of witchcraft in the traditions of German-speaking Catholics, may have connections to the Greek goddess Diana.

Another common idea is that Holda is related to the evil Herodias, the mother of Salome who encouraged her daughter to decapitate John the Baptist. 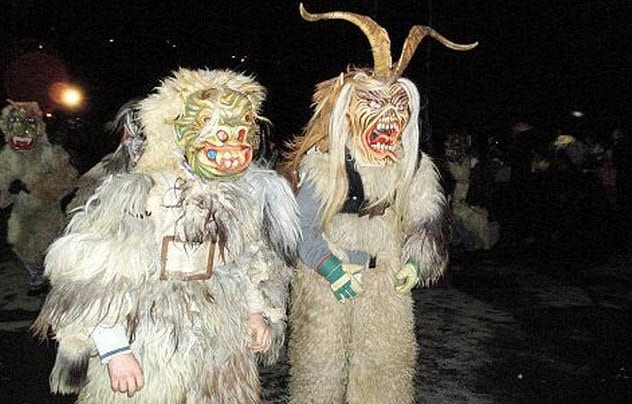 Thanks to the Internet, comic books, and certain horror films, much of the world has seen a renewed interest in the figure of Krampus. A demonic helper of Saint Nicholas, Krampus is native to the German-speaking regions of the Alps. However, it is incorrect to think that there is just one interpretation of Krampus.

In both East Tyrol and the German-speaking Italian region of South Tyrol, the Klaubauf monsters are ugly and hairy creatures that are summoned by the vocalizations of children on the eve of Saint Nicholas Day.

Once awakened, the Klaubauf follow Saint Nicholas as he goes house to house to find the good and bad boys and girls. In some places (such as Thurn, Austria), locals and Klaubauf performers engage in violent wrestling matches. 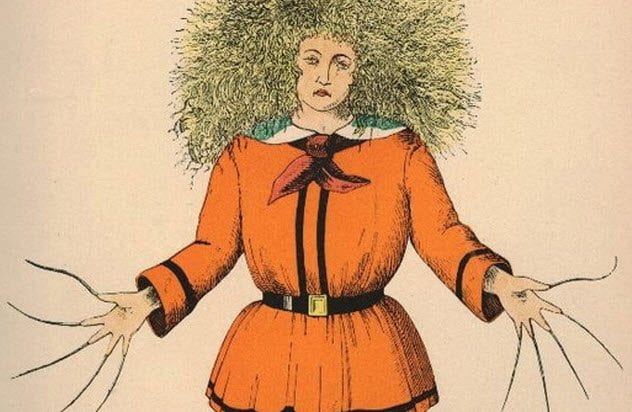 “Ungroomed Peter” is but one name for a whole host of dark Christmas legends. As the central antagonist in Heinrich Hoffman’s story of the same name, Ungroomed Peter is a giant monster with long, shaggy hair and even longer fingernails. He eats or otherwise tortures children who terrorize animals, refuse to eat dinner, suck their thumbs, or do other mischievous things.

Various other bogeymen of German and Austrian legends include the Black Man, Krampus, and Ruprecht. Taken together, these figures are designed to instill in children good habits through terror. They also connect older Germanic practices of the Yuletide with some of the Italian traditions of Carnival. 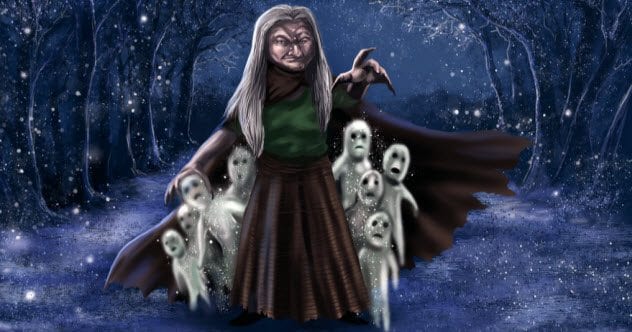 The eve of the Twelfth Night is known as Perchta’s Day. Yet another creepy creature of the Alps, Frau Perchta is depicted as a ghastly old crone. Specifically, it is believed that unless one eats a specific diet, Perchta will steal into the house and slit open your stomach.

A creature of the snowy mountains of Austria, southern Germany, and Switzerland, Frau Perchta bears many of the hallmarks of ancient forest deities. Similarly, Perchta is often depicted as both a goddess and a witch.

Unless one wants to be attacked by the wild-eyed Perchta, it is recommended that milk or porridge be left out for the creature to consume. This may be one of the origins for the American tradition of leaving out milk and cookies for Santa Claus. 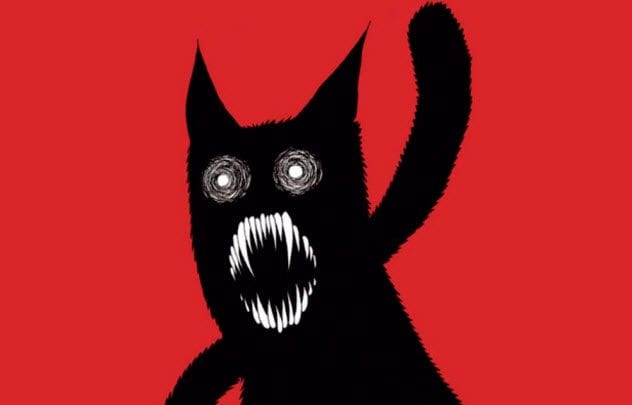 In Iceland, Christmastime is when the Yule Cat punishes those who do not own a new piece of clothing. The Yule Cat, or Jolakotturinn, is described as a gigantic beast that reminds the Icelandic people to work hard throughout the coming year. Namely, those who have not worked hard enough to afford new clothes will be visited by the Yule Cat, who primarily likes to eat up all of the lazy party’s food.

Although the origins of the Yule Cat are in question, the point of the stories is not. Although only a few stories show the cat actually eating humans, this massive creature is a sort of bogeyman promoting industriousness among a people well-known for their work ethic. 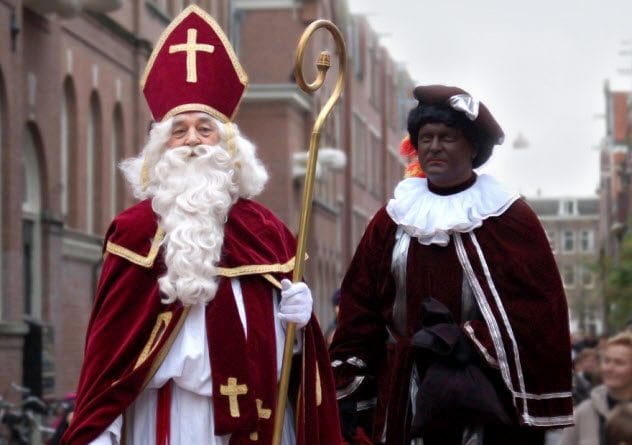 As can already be seen, the figure of Saint Nicholas is most often associated with the darker strains of European folk belief about the Christmas season. Primarily celebrated in the regions of Nord-Palais-de-Calais, Alsace, and Lorraine (the latter two of which have sizable German-speaking populations), Saint Nicholas Day falls on December 6.

One of the most popular and gruesome stories about Saint Nicholas concerns how he rescued three children from the dreaded Pere Fouettard. As the story goes, Fouettard was a wicked butcher who stole three lost and hungry boys in order to eat them.

In some stories, Fouettard manages to consume the boys, while in others, they are saved at the last minute by Saint Nicholas. Once the boys are returned to their families, Saint Nicholas turns Pere Fouettard into his helper—a switch-carrying menace who threatens bad children during the annual giving of presents on the night of Saint Nicholas Day. 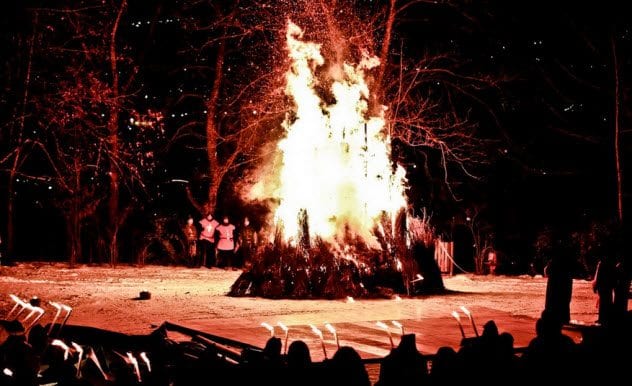 This particular legend is based in historical fact. Celebrated annually in early January in the Italian regions of Trentino and South Tyrol, the Val di Fiemme witch trial reenactments are folk memories of the executions of 14 people between 1501 and 1505.

The trials began when a man named Giovanni delle Piatte claimed to have met the goddess Diana (some sources say he met the Germanic goddess Holda) in the Venusberg, the legendary home of the goddess Venus in German-speaking Alps.

To avoid his own execution, delle Piatte named several other witches whom he saw in the mountains after dark. A woman named Margherita Tesero (or Vanzina) was named as the head of the coven and the supposed leader of a cult dedicated to communicating with incubi and other malevolent spirits.

Today, in the town of Cavalese in the Italian Tyrol, the witchcraft trials that sought to stop local witches from commanding the weather and cursing their neighbors are commemorated through live-action performances and the burning of hanged witches in effigy. 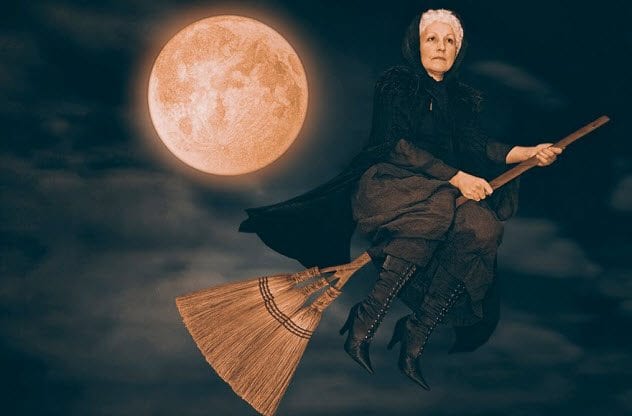 La Befana has been called the Christmas Witch. All throughout Italy, La Befana is described as a witch who flies through the winter skies on a broom. On January 6, or Epiphany, La Befana gives presents to well-mannered boys and girls.

For bad children, La Befana is said to climb down chimneys and dump coal or leave switches in their stockings. It is not uncommon for Italian parents to warn their children that La Befana will snatch them up if they don’t behave.

In many ways, La Befana plays a similar role as both Saint Nicholas and Krampus in the German-speaking Alps. Furthermore, La Befana may have the same origins as Holda in the pre-Christian past. Similarly, both figures have been given Christian backstories to counteract folk traditions outside the teachings of the church.

In the case of La Befana, she is said to have been approached by the Three Magi on the night of Jesus’s birth. After giving the Wise Men shelter and food, she declined to see the birth of Christ because she had too much housework to do. Sometime later, La Befana changed her mind, but she could not find either the Magi or Jesus. As such, she continues to fly around today in search of both.

10 Disturbing Animated Shorts That Will Give You Nightmares