Thanks to popular culture, Tyrannosaurus rex lives in our minds as a fearsome loner that roared and mindlessly ate everything that moved. In reality, they looked and sounded different, were social, and did things even more nightmarish than you can imagine. But not all is blood and gore. T. rex bones have also solved some sticky paleontology puzzles. 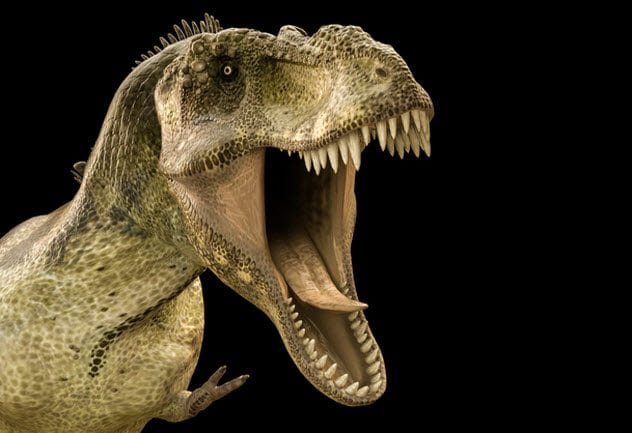 T. rex may not have been so toothy. A new study suggests that the ferocious dinosaur might have had lips that completely covered its pearly daggers. Sadly, this could one day remove the popular image showing off the permanent croc-like grin.

The Cretaceous predator’s fearsome fangs had a thin coating of enamel. To avoid decay, especially when it is this fragile, enamel must remain moist. Today’s larger lizards support this face-changing theory. Land-dwelling species, like the Komodo dragon, all have enclosed teeth.

Their lip-lacking brethren, such as crocodiles, live in water, so they don’t need the extra moisture. Since T. rex scared everything on land, not water, it’s plausible that they also needed lips to keep those 10–15–centimeter (4–6 in) snappers in peak condition.

9 They Ran In Packs 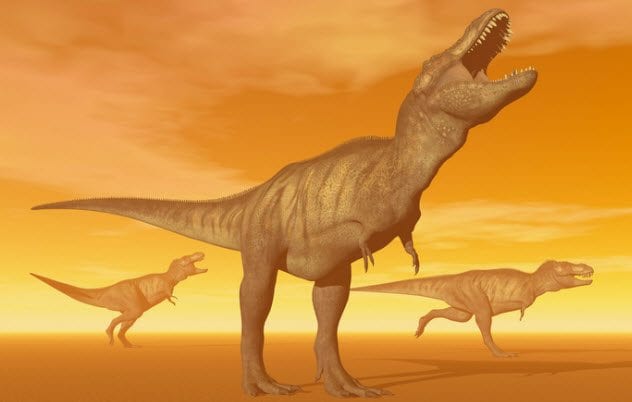 This is one moment in time that you don’t want to go back to. In western Canada, researchers found the tracks of three tyrannosaurs moving together. While they didn’t find a trail of destruction, interesting behaviors and hints about the dinosaurs themselves were uncovered.

These were life-scarred, successful adults. The trio clearly knew how to survive in a dinosaur-eat-dinosaur world. All three were about 30 years old, a grand age for T. rex. Skin imprints were still visible from the well-preserved tracks and even showed the severed claw from one T. rex‘s left foot.

They walked side by side but kept well out of each other’s reach. The 70-million-year old spoor is the first discovery of a stretch of T. rex tracks as well as the best evidence that the beasts did form herds. 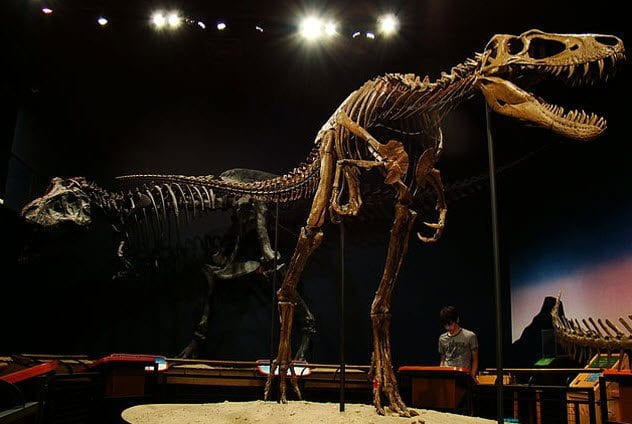 There’s a reason why the Canadian Three kept their distance from each other. From an early age, T. rex kids locked in vicious battles with each other. An adolescent fossil called “Jane,” although her gender is unknown, was bitten to the bone by another testy teen.

Her snout and upper jaw suffered a serious attack that broke her nose. The scrap was with a peer of similar age since her own teeth fit the shape and size of the scars. When Jane was about 12, she died. By then, her snout had already healed, although it was somewhat flattened. This means that the fight occurred when she was years younger. 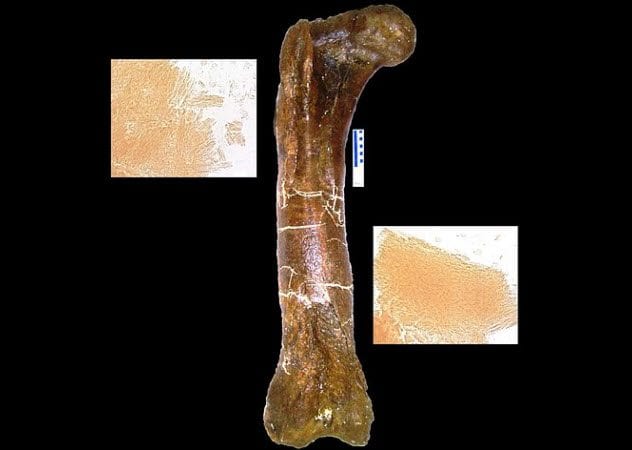 Paleontologists still struggle to separate the girls from the boys. Even species with frills, horns, plates, and spikes possess no clear gender traits, appearing for some reason to be identical.

Enter MOR 1125. The dull-sounding tag is attached to groundbreaking tyrannosaur remains—a definite female. Molecular biologists found a way to identify dino moms at least, all thanks to MOR 1125.

Her thighbone held evidence that she was pregnant at the time of her death. A special tissue was found inside, named medullary bone. In modern birds, it’s as good as a positive pregnancy test.

The scientists subjected the tissue to a multitude of tests to rule out a disease and succeeded. The tissue matched medullary bone both chemically and structurally. The discovery proves that, similar to birds, a sharp rise in estrogen laid down true medullary bone in pregnant dinosaurs. 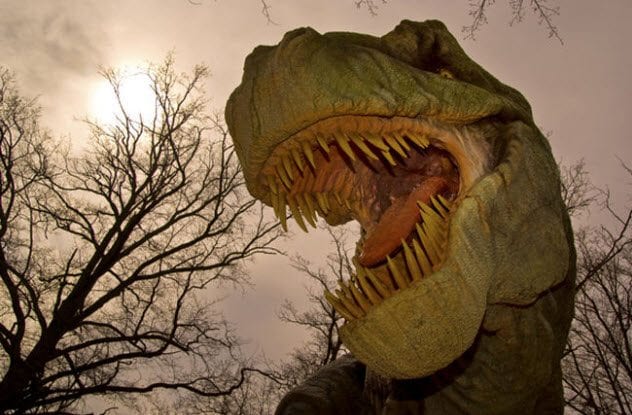 The scary interspecies violence didn’t end with breaking each other’s noses. If the meat was available and T. rex was hungry, dinner was served—even if it meant crunching on cousin Bob.

The prehistoric predator needed a lot of meat to survive. Their fossilized poop contained half-digested bones and flesh, indicating a fast metabolism and perhaps quick tummy rumbles urging the dinosaur toward the next meal.

Scientific circles have known for a while that T. rex was a cannibal. Separate discoveries of tyrannosaur bones, carrying the trademark serrated teeth damage, show that they did indeed feed on each other. Researchers are unsure whether T. rex cannibalized their own by deliberately killing them or scavenging on the already dead. Most likely both. 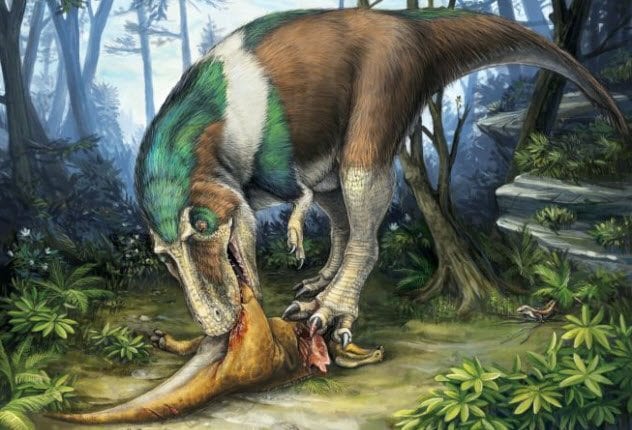 Anyone can see that tyrannosaur snappers belong in a slasher movie. Their blood-splattered purpose is hard to overlook. But the deadly bite didn’t just come from the obvious. T. rex‘s teeth were also built for killing on the inside.

Each tooth was serrated like a steak knife. These enamel points touched within what was first mistaken for cracks caused by high-impact grabbing and tearing. A fresh study determined that the “cracks” weren’t feeding damage but an internal type of fold.

Running deep into the tooth, the folds kept it sharp and stable, minimizing the chances of getting knocked out by feisty prey. This dental structure is unique to T. rex and other carnivorous theropods. The ability to hang onto highly effective fangs could be the reason that these dinosaurs successfully walked the planet as the largest meat eaters ever. 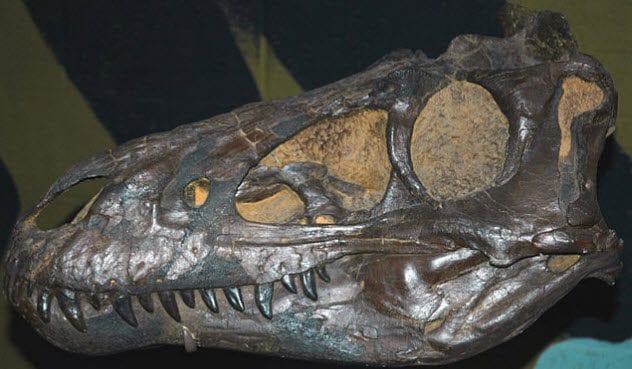 In 1988, paleontologist Robert Bakker declared a T. rex–type skull to be a new species, Nanotyrannus. Compared to the robust head of a tyrannosaur, the Cleveland Museum fossil was infinitely smaller, narrower, and had more teeth.

But was it really a dainty family member or a baby T. rex?

Few believed that T. rex could change so drastically while growing, and so the debate raged for years. In 2001, the most intact juvenile T. rex to date was discovered in Montana.

It was none other than Jane, which we discussed above. The half-grown dinosaur was the missing middle child that connected the Cleveland skull to her own breed. She possessed the jawbone gaps once thought to be unique to little Nano.

Nanotyrannus was made obsolete. But in its place, researchers now know that T. rex did indeed switch its looks big time during the different stages of its growth.

3 Intelligence Made Them Apex Predators 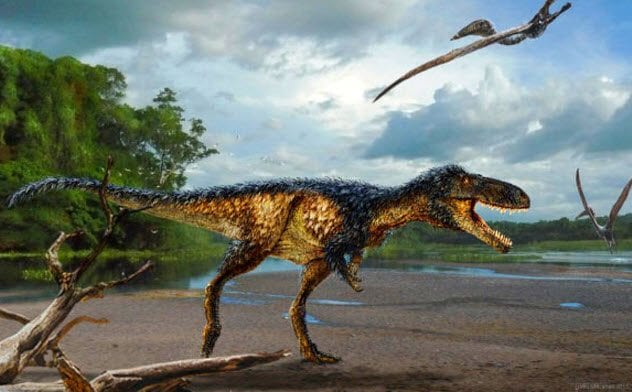 Another gap existed in the T. rex time line, in this case within its evolution. Ironically, it also involves a smaller tyrannosaur. This one was a family member—an ancestor called Timurlengia euotica.

Previously, experts couldn’t understand how the earliest horse-sized forerunners developed into the most feared apex predator that would eventually weigh over seven tons. Timurlengia may be the answer. Its braincase indicates a math-nerd intelligence and could prove that smarts, not monstrous size, was behind T. rex‘s rise to dominance.

The tyrannosaur group played second fiddle for millions of years to larger carnivores. They only rose to the top of the food chain when T. rex‘s competition mysteriously went extinct.

When the apex predator position became available, they already possessed the intelligence and sharp senses to beat other takers. Interestingly, their famous bulk only evolved later, near the end of the dinosaur age. 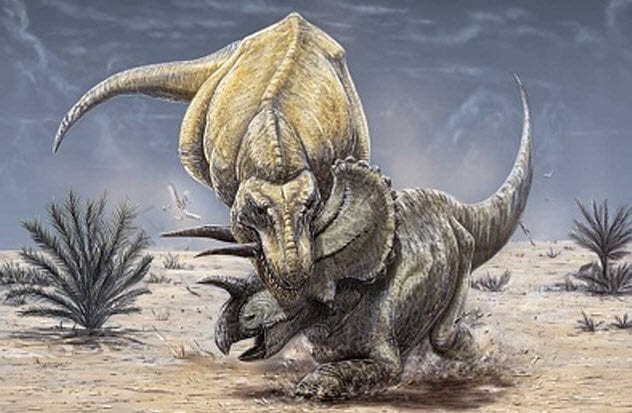 Researchers were intrigued by Triceratops‘ neck frills that revealed an unknown behavior from T. rex. Fang marks matched the predator biting and even pulling on the frills.

Each prey fossil examined was determined to be dead at the time that T. rex appeared to develop a fascination with the bony appendages. Wondering why they would nibble on something that had no meat, scientists looked deeper. What they found was horrifying.

Adult T. rex had the habit of decapitating Triceratops. The nibble was more of a violent tugging so that T. rex could pull off the head of its prey.

Triceratops‘ neck muscle appeared to have been the sought-after delicacy, and the bony frill was in the way. There were also slash marks on the neck joints of several Triceratops, something only possible if the herbivore’s head had been torn off. 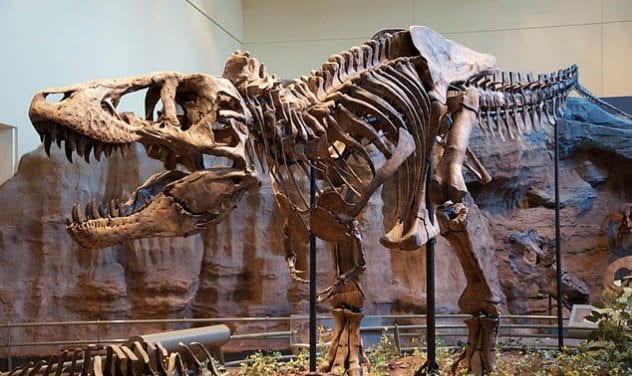 To discover what T. rex really sounded like, a study looked at the nearest thing to dinosaurs alive today. Examining how these so-called archosaurs—crocodiles and birds—vocalize, researchers concluded that bigger dinosaurs such as Tyrannosaurus didn’t perform theatrical bellows that shook the Earth.

If it was anything like its feathered descendants, it would not have had vocal cords but air sacs, perhaps even an avian syrinx. Without vocal cords, T. rex couldn’t roar.

When feeling the need to communicate, T. rex would have inflated the sacs to produce noises without opening its jaws, just like some of the larger bird species do. The real sounds of the most well-known dinosaur would have been disappointing—closed-mouth booms and coos.